A delusional surgeon with a god complex creates a race of half-human beasts using ghastly surgical techniques in his House of Pain.  Adapted from an 1896 novel by H. G. Wells, this gruesome horror film was banned in twelve countries for its religious sacrilege, as well as deviant sexuality.  Laughton is a sadist, a white suited colonial terrorist, cracking a whip over his domain.  The film begs that we feel compassion for the nonhuman, partly human and other outsiders who never asked for their fate, and sows dangerous ideas of cross-species mating and political rebellion. Shadowy cinematography, hideous make-up and a chilling performance by Bela Lugosi as the Sayer of the Law will haunt your nightmares.

H. G. Wells wrote The Island of Dr. Moreau in 1896, over a century ago.  This was among the earliest of his speculative writings, and it was quite radical in its proposal that man’s intervention in evolution was a way to reform contemporary, meaning Victorian, society.  This idea created a storm of controversy, with outraged reviewers calling it “loathsome and repulsive” and in the process, of course, making it a best seller (Wells 210). Wells had studied biology under T. H. Huxley, a proponent of Darwin’s theory, and his mad scientist, Dr. Moreau, seeks to transcend the limits of evolution as it was understood, unfettered by Judeo-Christian morality.  Science is not the villain, even if the effects of experimentation are a failure.  It is not the intellectual inquiry itself which is portrayed as wrong. 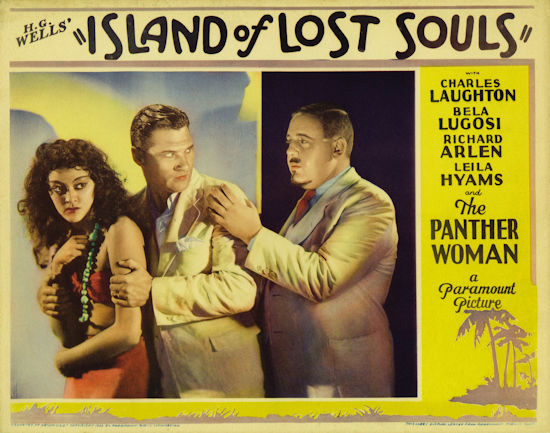 The Island of Lost Souls is a surprisingly close adaptation of the novel.  The main deviation is the character of Dr. Moreau himself, which Charles Laughton robustly depicts as a tyrant and a sadist.  Wells’ Dr. Moreau, even though he has become immune to the shrieks of his victims, is portrayed more sympathetically.  “You see, I went on with this research just the way it led me.  That is the only way I ever heard of research going.  I asked a question, devised some method of getting and answer, and got—a fresh question.  Was this possible, or that possible?  You cannot know what this means to an investigator, what an intellectual passion grows upon him.  You cannot imagine the strange colorless delight of these intellectual desires.  The thing before you is no longer an animal, a fellow-creature, but a problem” (Wells 115).

There had been two unauthorized adaptations of the tale in the silent era.  Wells finally agreed that The Invisible Man and The Island of Dr. Moreau could be sold to Hollywood.  Several screenwriters took a crack at Moreau, including at first, aspects of an unproduced play, His Creatures, loosely based on the source material.  Philip Wylie and Waldemar Young, a veteran of scripts starring Lon Chaney, would receive screen credit for the finished film.

The film was directed by Erle C. Kenton, who has a rather surprising biography.  He was born in 1896, and began as an actor, he was one of the original Keystone Kops.  By 1919, he was directing two-reel comedies, and in the sound era, he mostly directed B pictures, like those of Abbott and Costello, and some horror film sequels.  No other film of his could be considered a classic other than Island of Lost Souls.  He finished his career in tv in the 50s, directing episodes of forgotten series like The Texan, and Public Defender. 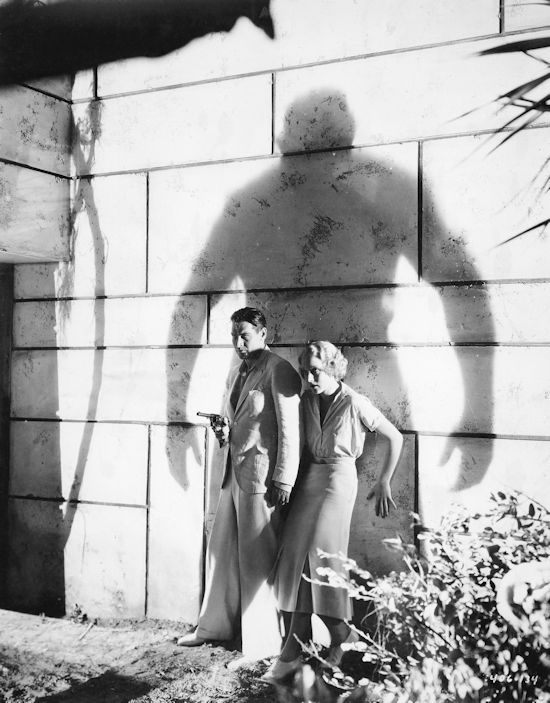 Although he authorized it, Wells was upset by the on screen portrayal of the surgeries, or more properly vivisection.  What did he expect?   I remember as a kid having to look up what that word meant (surgery without anesthesia)  and thinking that the refusal to try to alleviate the pain of his experimental subjects was perhaps the most shocking aspect of the book. Victorians were also obsessed with the opposite of evolution, devolution, as evidenced in Robert Louis Stevenson’s Dr. Jekyll and Mr. Hyde, and Oscar Wilde’s Picture of Dorian Gray. The Island of Dr. Moreau fits into this argument about evolution, sadly still fresh today.

This was only Charles Laughton’s sixth Hollywood film.  He was born in Yorkshire, England in 1899.  His patents ran a seaside hotel, the Victoria, in Scarborough.  He was the oldest of three sons, and his parents wanted him to have the best possible education.  Occasionally, he met travelling players at his parents’ hotel, “At a very early age, when I was not allowed to go to the theater, I was abnormally interested in the Pierrot troupes which performed on the beach at Scarborough”  (FIR 257).  He was sent to London at 16 to train for the hotel business, but he was drafted into WWI and gassed in combat.  He worked in the family hotel until he was 26, as well is acting in amateur theater.  His parents gave him three pounds a week to study at the Royal Academy of Dramatic Art, where Claude Rains was one of his teachers.  Of course, his unhandsome face and large body were considered a disadvantage, but he was determined, and began acting on the London stage.  He had a few small parts in British films, including Picadilly, his first.  A leading role in Payment Deferred brought him to the West End, then Broadway, and finally, Hollywood, in 1932.  His first film was for James Whale, The Old Dark House.  He married Elsa Lanchester in 1929, and they remained devotedly together during his lifetime, even though the fact that he was gay was an open secret in Hollywood. This film is one of his best remembered roles.  “The film lives and dies by Laughton’s performance. He’s all merciless smile and restless eyes glancing offscreen, barely containing some private joke he’s having with himself. His Moreau is creepy and controlled, with an unsettling undercurrent of suave, chubby sexual energy” (Christine Smallwood on Criterion.com). 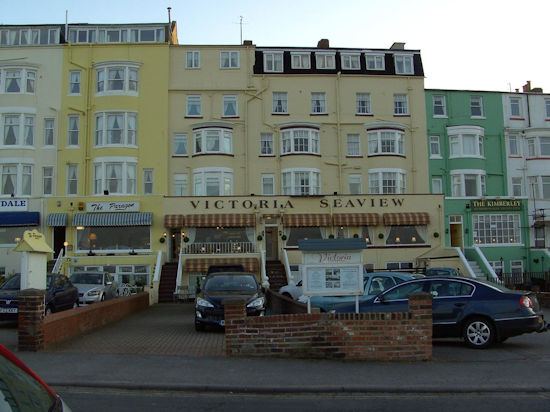 Is this the Scarborough Hotel that Laughton’s parents owned? Now, Trip Advisor thinks I want to go there, and maybe I do! 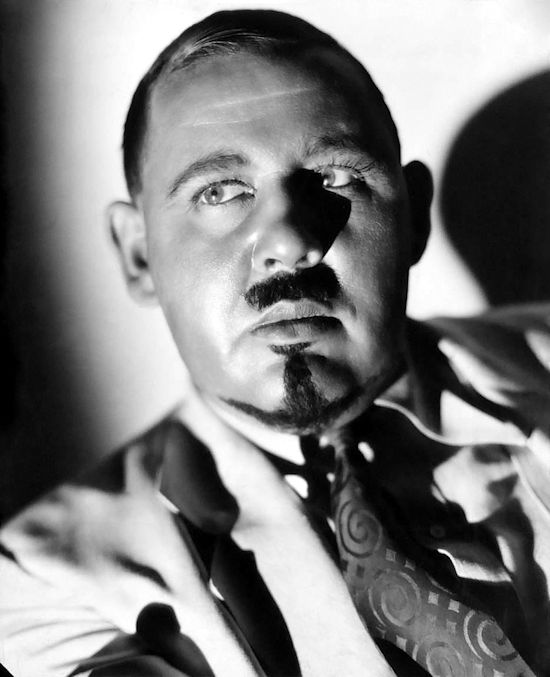 Richard Arlen born in 1899, (the same age as Laughton, 33 when this film was made) and is most famous for his role as a pilot in William Wellman’s WW I epic, Wings.  Leila Hyams was a popular actress of the early talkie era, a favorite of fan magazines.  She also co-starred in the other great body horror film of the Pre-Code era, Freaks. 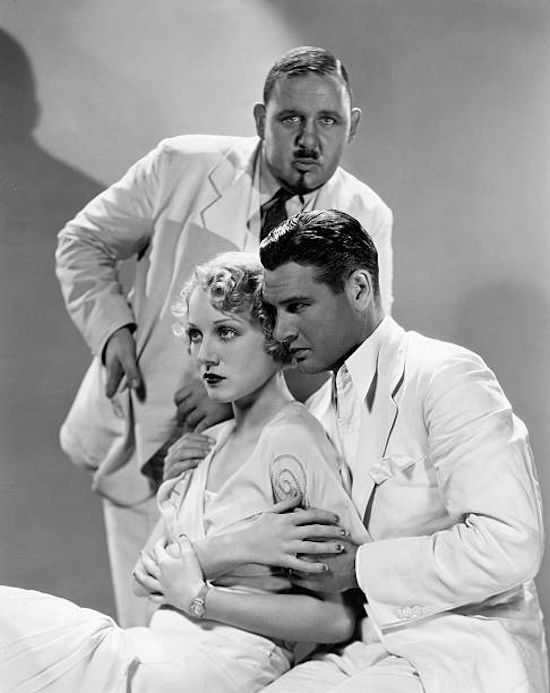 A nationwide search was instigated to find Lota, the Panther Woman.  Kathleen Burke, “was a charming though scarcely talented young woman from Chicago, where, by a peculiar coincidence, Paramount happened to operate more theatres than in any other city” (Skal 144).  Although Bela Lugosi dominates the Beast Men as the Sayer of the Law, other young actors underneath the make-up supposedly included Randolph Scott, Alan Ladd and future Tarzan, Buster Crabbe.

This version strained at the borders of the Production Code.  Each state had their own censor board, which mandated different cuts, depending on community standards.  Fourteen censor boards banned the film both because of suggestions of bestiality, and Dr. Moreau’s blasphemous intent to play God.  Still, the remaining film was so disgusting to contemporary audiences, people closed their eyes, or walked out;  some supposedly vomited in their seats.  After 1934, even an edited version could not play on television, and it was banned in Britain. Times have changed.  There have been more recent versions of the story (even on The Simpsons) and there is little plot suspense: you have no doubt what Moreau is up to.  And, I’m sorry to say that the call “Are we not men?”now will evoke a response dictated by Devo, not The Law. (I was surprised to discover that Mark Mothersbaugh and Gerald Casale, founding members of the band, both saw Island of Lost Souls first on the Ghoulardi Show, a late night monster movie showcase hosted by Ernie Anderson on local Cleveland, OH, television. I’m sure I saw it for there first time there, as well. They were at Kent State University when the National Guard opened fire on Vietnam War protesters on May 4, 1970, and felt strongly it was a sign that humanity was de-evolving. The film was a huge inspiration for their music).

Yet, a blend of location shooting on hot and humid Catalina Island, and the studio sets designed by the great expressionist Hans Drier and shot by Karl Struss, the visionary cinematographer of Murnau’s Sunrise, creates a claustrophobic space where the screams of the beast men still have the capacity to shock.  Both Kenton and Struss had been portrait photographers.  Paramount could provide real fog on the backlot, and when that wasn’t possible, “Struss gave the film the Paramount treatment, making hot light fall through bamboo slats onto steaming white stucco” (Viera 158).  Early 1930s horror films are shadowed by the men who returned from WW I, both physically deformed, or jittery with what was then called shell shock.  Dr. Moreau, in his plantation white suit evoked the colonial tyrants who cruelly exploited those people called “the natives.”  In fact, in Australia, this film was rated NEN, meaning it could not be shown to an aboriginal audience, in the fear that it might provoke a similar rebellion against cruelty and exploitation.  At a time when a large percentage of the world was still in the grip of colonialism, this stinging critique of it, even in the guise of a monster movie, is quite surprising. 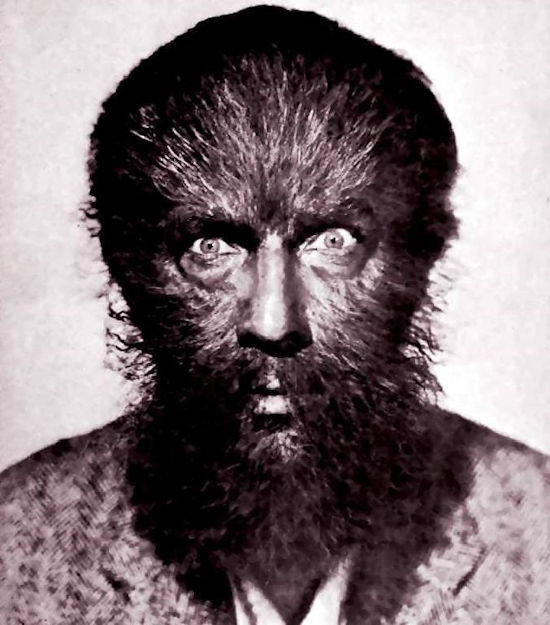 Bela Lugosi as the Sayer of the Law 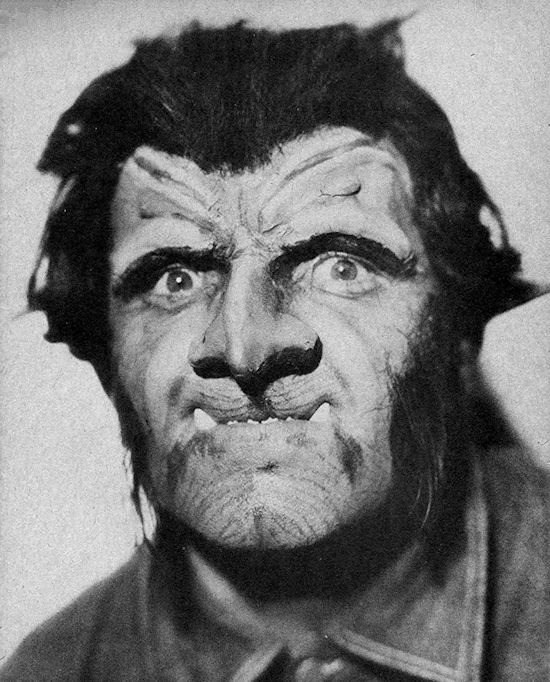 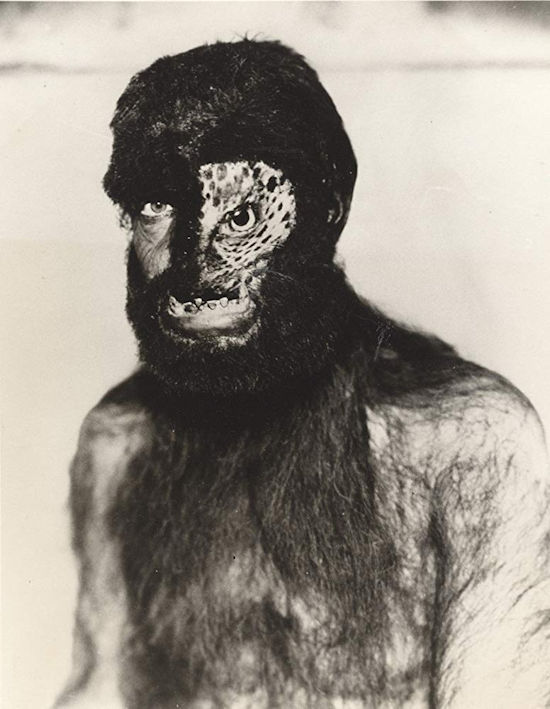 Terrifying make-up! All the extras spent an enormous amount of time getting turned into beast-men.

So, what about the science?  In 1933, DNA had not been discovered.  Nucleic acids, which make up DNA were known, but the function of “germ plasma” was unknown.  Unlike Dr. Victor Frankenstein, who wanted to know what it was like to feel like the God of Creation, H. G. Wells’ Dr. Moreau speaks dispassionately of science.  Many of the changes Moreau seeks could be achieved (theoretically!) by altering DNA.  But why would you want to? Still, in the days of in vitro fertilization, GMO modified crops, voluntary body modification and even Alexa, the idea of science slipping out of the control of the scientists is ever present.

Another difference between the novel and the film is the attention paid to the hero’s return to civilization.  He finds his experience with Dr. Moreau’s experiments have changed the way he views his own species.  “Although I do not expect that the terror of that island will ever altogether leave me, at most times it lies far in the back of my mind, a mere distant cloud, a memory and faint distrust; but there are times when the little cloud spreads until it obscures the whole sky.  Then I look about me at my fellow men.  And I go in fear.  I see faces keen and bright, others dull or dangerous, others unsteady, insincere; none that have the calm authority of a reasonable soul.  I feel as though the animal was surging up through them, that presently the degradation of the Islanders will be played over again on a larger scale” (Wells 204).

“The point of it all is not whether they, or we, are animals or human beings. It’s about what kind of human beings we are, or could be. This is the question at the heart of Island of Lost Souls. Even those of us who are born with no beast flesh to creep back have to work, every day, to make being human something worth aspiring to in the first place”  (Christine Smallwood on Criterion.com) 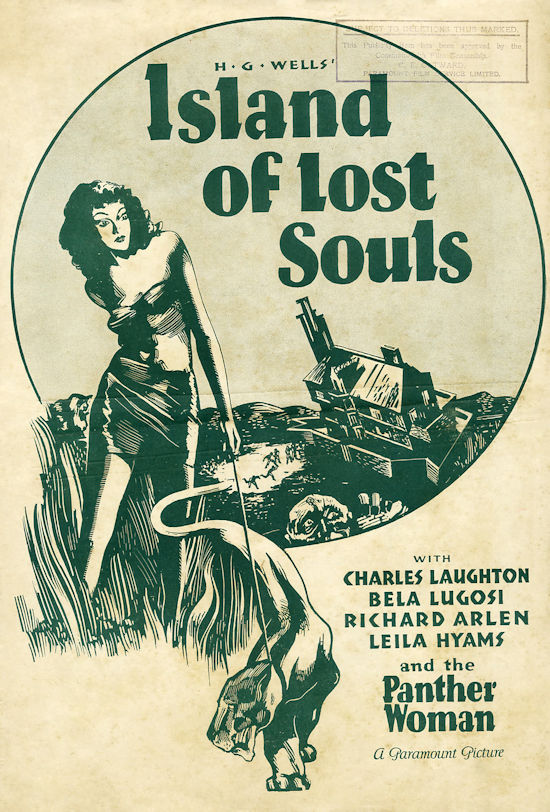 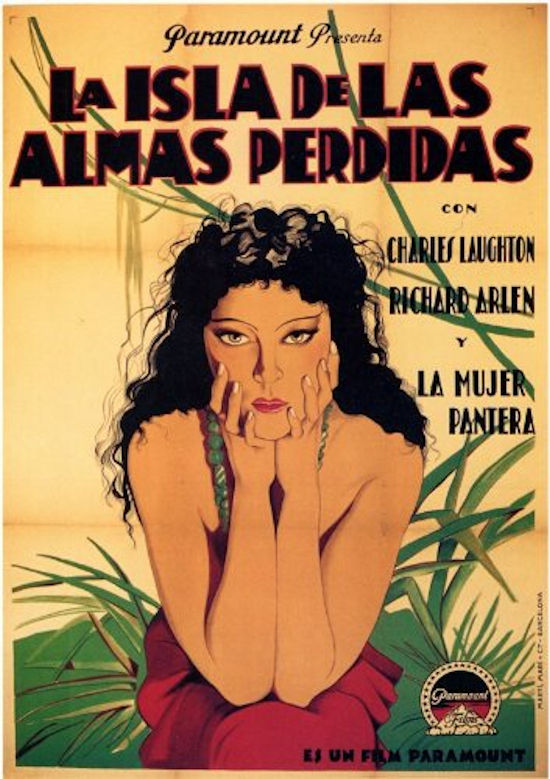 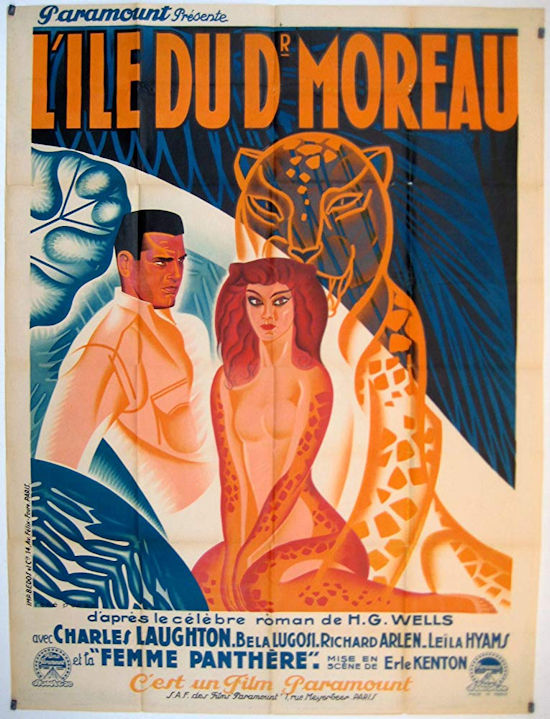 La Femme Panthère was a focus of the poster art, but her name was not printed–in any language.

The Island of Dr. Moreau by H. G. Wells with an afterward by Dr. John L. Flynn, The Biology of Science Fiction by Mark C. Glassy, “Charles Laughton” by Jerry Vermilye in the May, 1963 Films in Review https://www.criterion.com/current/posts/2034-island-of-lost-souls-the-beast-flesh-creeping-back Screams of Reason by David J. Skal, Pre-Code Hollywood by Thomas Doherty, Forbidden Hollywood: When Sin Ruled the Movies by Mark A. Viera, DVD extras on the Criterion disc of Island of Lost Souls