Why is sinister detective Ed Cornell angling to fry a brash publicity hack for the murder of hash slinger Vicky Lynn?  Laird Cregar sears another of his unforgettable villains into the film noir firmament.   “One of the most beautiful black-and-white movies ever made” (New York Sun).

I Wake Up Screaming is an odd movie.  It stars Betty Grable in her only non-musical role, a dramatic part played in midst of her craziest pin-up fame, when her legs were insured for $1 million.  Its score makes ample use of “Over the Rainbow” a song evoking very specific emotions in modern audiences.  But most notably, Laird Cregar plays a character so creepy and disturbing, he wouldn’t be out of place on a cable tv drama. Surprisingly, there are no celebrated auteurs involved in the creation of the film.  The director and cinematographer were described as hacks making a film “in which exposure of the killer is secondary to the uncovering of sexual obsession and envy”… “Yet they created a film almost abstract in its attention to pools of light—a stylish display of technique…shot after shot is composed with erotic meticulousness” (Giddens 337). 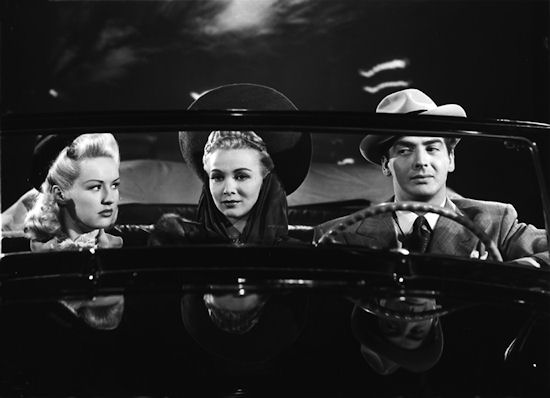 The film was released only a few months after The Maltese Falcon, and amazingly, the conventions of film noir, the dramatic lighting, the night locations and the hero forced to prove his innocence in the face of police suspicion are already in place.  Based on a novel of the same name by Steve Fisher, the film was first renamed Hot Spot, for the electric chair in which Detective Ed Cornell wants to place promoter Frankie Christopher. Audiences, expecting Grable to sing and dance, mistook the title, thinking the film must be about a popular night club.   The title reverted to that of the novel, although it was called Hot Spot in the UK. 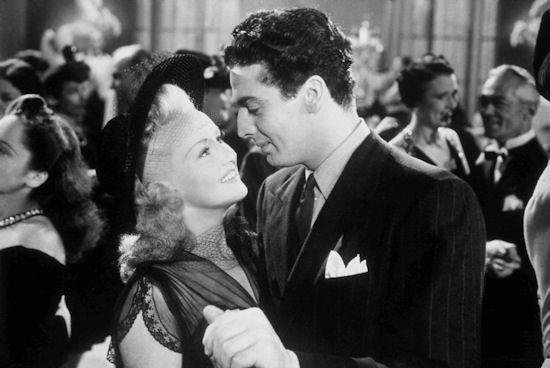 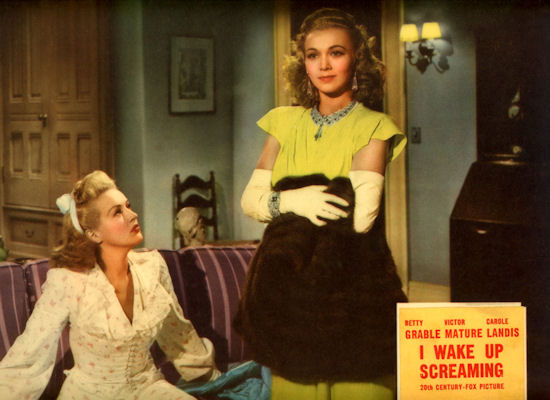 Betty Grable, a top ten box office star for a decade wasn’t a glamorous, slightly unattainable beauty like Rita Hayworth or Gene Tierney. Her appeal was exactly the opposite, a pretty girl next door, brash, honest, and approachable.  As WW II’s #1 pin up girl, with her saucy bathing suit pose looking over her shoulder, she acted in a series of pleasing Technicolor musicals.  Richard Schickel said, “She was, at best, a sort of great American floozie, and her appeal to lonely GIs was surely that of every hash house waitress with whom they had ever flirted”  (Shipman 250). Her talent wasn’t magnificent, but her films were box office gold, although they did not get glowing reviews. 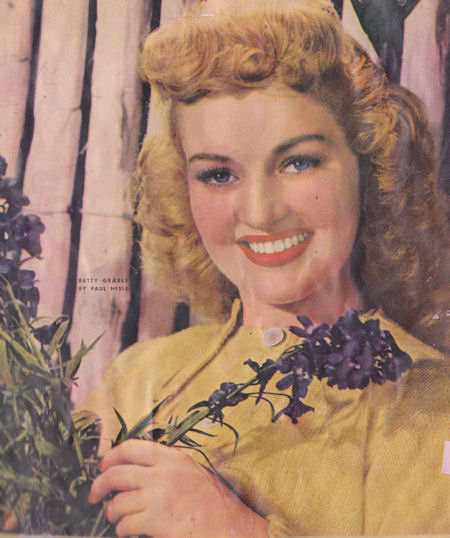 She worked hard for her success.  She was born in St. Louis MO, and, after she moved with her mother to study dancing in LA, she was a movie chorus girl by the time she was 14.  She worked in films with Eddie Cantor and Wheeler and Woolsey, and occasionally had a part in which she was noticed, like singing “Let’s Knock Knees” with Edward Everett Horton in 1934’s The Gay Divorcee, a Fred and Ginger movie.  She married and divorced former child star and future Uncle Fester Jackie Coogan, and after a decade in Hollywood went to NYC to play the second lead in the Cole Porter hit, DuBarry was a Lady.  When Alice Faye, who was supposed to star in Down Argentine Way opposite Don Ameche contracted appendicitis, Grable’s face on the cover of Life Magazine got her the part that would be the gateway to her decade of stardom.  She acted with Alice Faye in Tin Pan Alley, Moon Over Miami (also with Carole Landis), and Pin Up Girl, before two dramatic roles, one as Tyrone Power’s girlfriend in A Yank in the RAF, and then in I Wake Up Screaming.  But, it was her musicals that topped the box office polls and she returned to the back stage musicals her fans adored as Hollywood’s highest paid star. In fact, according to Robert Osborne on TCM, she did not like her performance in this film, and determined to stick with the singing and dancing she knew best.

Victor Mature was known for being a Glamour Boy, Beautiful Hunk of Man, King of Beefcake and A Face That Would Melt in Your Mouth…which just goes to show that beauty is in the eye of the beholder.  He was born in Louisville KY and was a reluctant student.  At 15 he left school as a wholesale candy salesman, and eventually opened his own restaurant in Louisville.  But, he decided he wanted to become an actor, sold the restaurant and moved to California, much to the annoyance of his parents.  He was accepted at the Pasadena Community Playhouse School, where movie scouts often visited, and after several years of stage acting and a colorful variety of odd jobs landed a contract at Hal Roach Studios, where one of his first jobs was in the caveman epic One Million Years B.C. opposite Carole Landis.  He looked pretty good in his prehistoric attire and became a sensation.  He embraced the publicity for his face and physique.  After starring on Broadway in Moss Hart’s Lady in the Dark, he returned to Hollywood for the early noir The Shanghai Gesture, opposite Gene Tierney, which led to his loan out to Fox for I Wake Up Screaming.  Although the film was not well reviewed, it did make some money, and Mature would continue in a series of film noirs including Kiss of Death, where, instead of being upstaged by Laird Cregar, he was upstaged by Richard Widmark.  He enjoyed a long career, in Biblical epics, eventually parodying himself in the Peter Sellers comedy After the Fox, until the mid-1980s.  He was happy to play whatever parts were on offer, he never took himself seriously.  “But don’t get me wrong, whatever you do.  I picked this racket, and I love it” (Hannsberry 443). 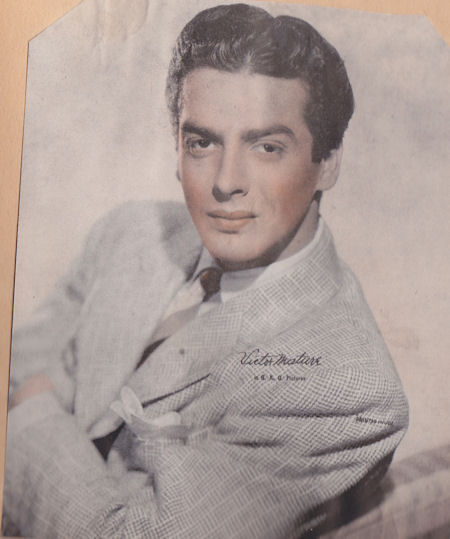 The completely gratuitous scene at the Lido Plunge pool is included solely for the beefcake/cheesecake gratification of the audience. “Did anyone ever look better in hats than Mature and Grable? He is particularly lively, holding his own with the looming, velvet-voiced Cregar” (Giddens 338). 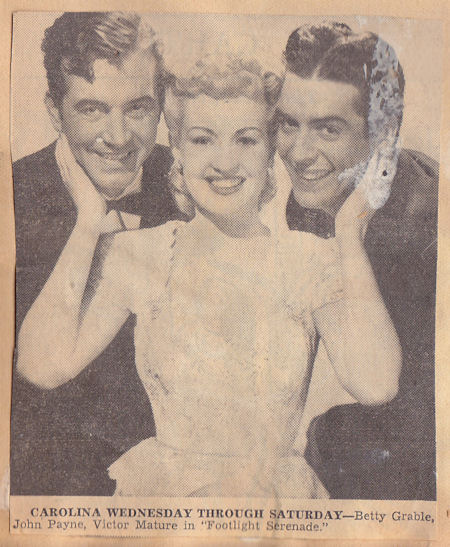 The film also contained tragic personal histories.  Laird Cregar was born into a well to do Philadelphia family, the spoiled youngest of a family of six boys. Shipped off to school in England, he discovered acting.  The stock market crash wiped out the family fortune, and he went west in hopes of breaking into films.  By then, he was 6’ 3” and 300 lbs. He was gay  (and had come to Hollywood’s attention with his one man show on Oscar Wilde, rather a giveaway) who, with an actor’s capacity for self-delusion, thought he should be a romantic star, in spite of his weight.  One of his co-stars confirmed his restlessness about his screen image, “He wanted to be Clark Gable” (Hernandez 133). Film historian DeWitt Bodeen recalled, “He was like a big Saint Bernard who couldn’t understand why you didn’t want him in your lap” (Mann 265). Eventually, he found fame typecast as psychopaths, including as Jack the Ripper in a version of The Lodger, but died of a heart attack only three years later, in 1944 at the age of 28, from the effect of amphetamines used in a crash diet loss of 100 pounds, an effort he thought would make him handsome enough to be a leading man. 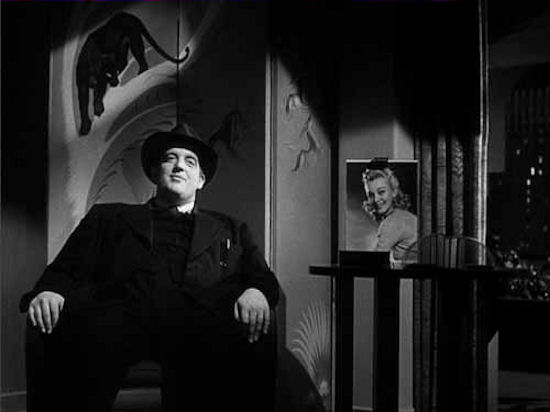 Laird Cregar as a stalking panther. 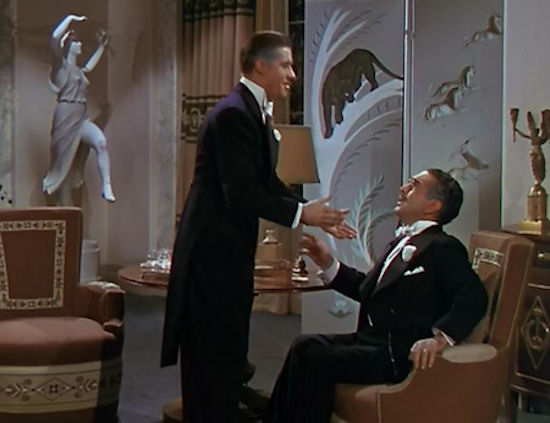 And, look! Fox used the same screen in That Night in Rio! (Don Ameche and J. Carroll Naish)

Carole Landis also had a tragic personal history.  She never got big starring roles, mostly languishing in B pictures.  After co-starring with Grable in Moon Over Miami, the two actresses appeared to be feuding (at least it was played up in the gossip press) perhaps because Landis was viewed by some critics as the more talented of the two actresses.  Director Humberstone said of her, “Carole was extremely underrated as an actress” while saying of the movie’s star, that she could be good, “with a little coaching and a lot more self-confidence “ One critic even described Landis’ performance as “outshining the woman who won WW II” referring to Grable’s pin up popularity with the boys in uniform. (Fleming 100). After an ill-starred love affair with the married Rex Harrison, she committed suicide with an overdose of sleeping pills in 1948. 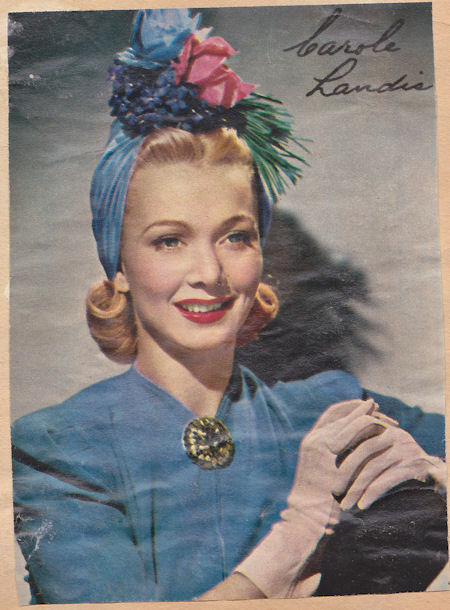 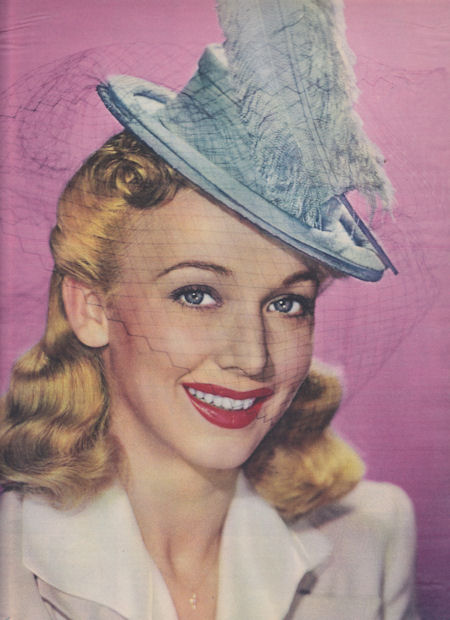 “Steve Fisher’s trashy source novel has given Humberstone and his cast a world devoid of light, hope, or any promise of the future; I Wake Up Screaming exists in a zone where all is a perpetual nightmare, from which one can never awake” (Dixon 11).

Grable, Mature and Landis were all scrapbook favorites, as you can see from the selection of fan magazine portraits. Landis is posed in blue, to match her eyes.