Buildings 250 stories high!…Traffic on nine levels…Rockets that shoot from star to star…Airplanes that land on the roofs of buildings…A whole meal in a capsule that can be swallowed in one gulp…No–this isn’t a Jules Verne dream induced by a welsh rarebit…It’s New York in 1980, as foretold in the new Fox picture, “Just Imagine!”…A picture of the great set showing the metropolis fifty years hence–the most intricate setting ever created for pictures…it took 205 engineers and craftsmen five months to build it, at a cost of $168,000…it was designed after longer conferences with noted artists and scientists who dare peer far into the future…The sets stands in a balloon hangar at a former Army flying field twenty miles from Hollywood…Seventy-four 5,000,000 candle power sun arcs light the set from above…Fifteen thousand electric light bulbs illuminate its buildings and streets…DeSylva, Brown and Henderson, the trio responsible for “Sunny Side Up” conceived “Just Imagine!”…The leads are played by John Garrick, Maureen O’Sullivan, El Brendel and Kenneth Thomson…In 1980–people have serial numbers, not names, marriages are all arranged by the courts…Prohibition is still an issue…Men’s clothes have but one pocket. That’s on the hip…but there’s still love! Don’t laugh! Our grandaddies laughed at the thought that men might fly! Fantastic? Certainly–but stranger things have come to pass than those which have been portrayed in this dream of New York of A.D. 1980! —(From Nov 1930 Photoplay, reprinted in The Talkies, by Richard Griffith.)

What did 1980 look like from the depths of the Depression? Why, it looked like a musical, perhaps the only science fiction musical ever made. Zapped by a bolt of golf course lightning in 1930, El Brendel wakes up 50 years later. People have numbers instead of names, babies are born from vending machines, but Prohibition has NOT been repealed. Teen-aged Maureen O’Sullivan stars, not yet Tarzan’s Jane.

Fox, before it became 20th Century Fox (evolving to Fox Entertainment, bought (in 2021 by Disney) was more careless with their film library than any other studio. Many late silents and early talkies were believed junked, until a careful inventory revealed at least some of these treasures mislabeled and misfiled in the vault. Enticing still photos made Just Imagine among the most hotly sought titles. It resurfaced around 1970, just a few years before Single 0, the film’s hero would have reawakened.

DeSylva, Brown and Henderson composed such standards as “Sweet Georgia Brown” and were billed by Fox as “the three wise men of entertainment.” After a smash hit with Sunny Side Up, they turned their talents to a truly nutty concept, a musical version of Fritz Lang’s Metropolis. Just Imagine‘s futuristic city, designed in miniature in a dirigible hangar 20 miles outside Hollywood, was even more elaborate and expensive than the one Lang built in Berlin, costing Fox a reputed quarter million Depression dollars. The art director, Stephen Goosson and the mechanical effects director Ralph Hammeras “drew inspiration from a number of sources: from the proposals of New York architect Harvey Wiley Corbett, from the visionary drawings of the Italian Futurist Antonio Sant’Elia, and especially from the work of the architectural delineator Hugh Ferriss, whose book Metropolis of Tomorrow, published the same year as the miniature’s design, reiterated the vision of widely spaced towers rising from lower buildings, all linked by multi-level walkways and bridges (Sanders). Fifteen thousand tiny light bulbs brought this futuristic city to glittering life. Celluloid Skyline also points out that “where Metropolis seems inspired by lower Manhattan, with its angular streets and closely packed towers, Just Imagine‘s city suggests midtown, its layout of buildings and avenues more regular and widely spaced.” It’s incredible to think that in 1930, except for Chicago, New York was the only skyscraper city on earth.

Goosson and Hammeras are credited with the first completely successful use of a rear projection system in this film and received an Academy Award nomination for Best Interior Decorationthe only category remotely describing their accomplishments. Kenneth Strickfaden’s Art Deco lab was also praised, although his crackling electrical masterpiece was still to come in Frankenstein (to be reused by Mel Brooks in Young Frankenstein). Just Imagine was a flop when it was first released, partly because the first cycle of musicals which began in 1927 with The Jazz Singer was coming to an end. But, Fox made money for years selling stock footage of the futuristic sets, recycled in the 1939 Buck Rogers serial and many others. 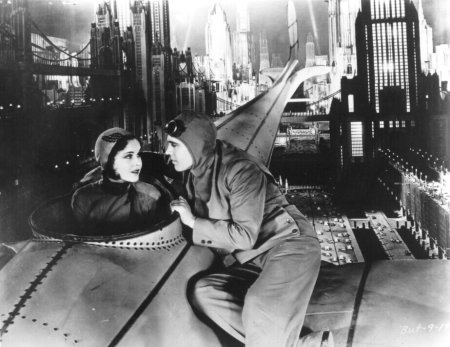 “The Martian costumes could start new fashion trends if this got widely shown. Lightning bolts, spikes and metallic print bikinis mixed with ridiculous wigs and eye make-up are part of the wackiest outfits in film history.” (Michael Weldon). The costume design team was Sophie Wachner (active 1923-31), Alice O’Neill (who was Wachner’s assistant from 1929-30; this was her last film) and Dolly Tree. This was Tree’s first film, during her career she worked mostly at MGM, doing a combination of A and B pictures, including The Thin Man, David Copperfield and the MGM Marx Brothers movies. The Queen of Mars (and her evil twin) played by Joyzelle, wear an outfit promoted as the first–and no doubt only–movie costume made entirely of mica. She looks like a giant lion fish, and her spikey dress makes a satifying rattling sound as she flounces around. The men’s double breasted lapel-less suits, buttoned on the hip, reinforce how little male dress has changed over the century. And, sadly, in the real 1980, LN would not be lounging in sexy fluttering chiffon, but in a jogging suit. 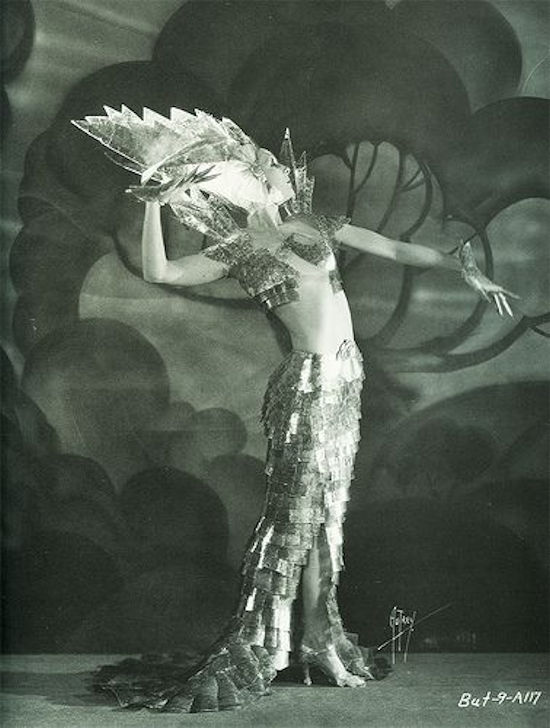 Joyzelle in her mica costume. 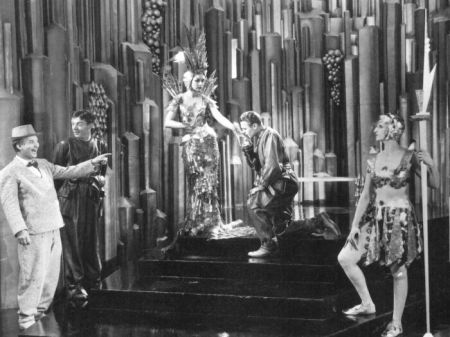 The hero is played by Swedish dialect comedian El Brendel. His humor may be puzzling to the modern-day viewer but he was wildly popular in 1930. Motion Picture magazine had just called him “the most irresistible man on the screen.” Early 20th century comedians were fascinated with the American melting pot experience. Many of them were first generation immigrants like their audiences, and a variety of comic accents like Chico Marx’s “Italian” accent were common. Brendel was from vaudeville, where a performer could tour the country for years with the same routine, but soon discovered that movies ate up a lifetime of jokes in a few months (and he does one of his routines here). He made some silent films, he was a comedy mechanic in Wings, but under contract to Fox seemed to appeared in many of their early talkies, even supporting John Wayne in his first crack at stardom in The Big Trail.

Richard Barrios in his marvelous book, A Song in the Dark, despises Brendel, whose jokes, he asserts, “wore out their welcome about the time of Charlemagne.” Brendel doesn’t bother me, perhaps because I don’t have to watch a lot of his films in quick succession. Those audience members who have been coming to my screenings know how interested I am in comedy archeology and the mystery of topical humor. A little bit of vaudeville never hurt anyone, and many current comedians will be considered unfunny 70 years from now. Leonard Maltin appears to have a soft spot for Brendel, but deplores the 2 reel Vitaphone comedies that succeeded his featured status, saying he devolved from a simpleton to an idiot. He fell further down the ladder into a series of Columbia shorts, where he subbed for the Three Stooges when the Three Stooges were unavailable, although one of his shorts “The Blitz Kiss” was nominated for an Academy Award in 1945. Joke deconstruction: the cars all have Jewish model names as a dig at Henry Ford, a notorious anti-Semite. 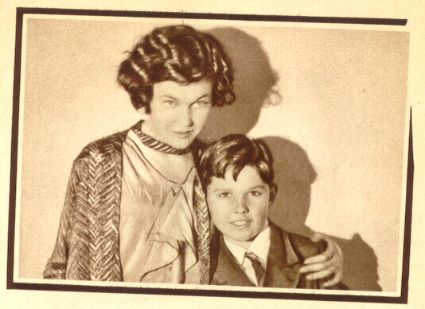 “Maureen O’Sullivan and Tommy Clifford, two little shamrocks from the land of Erin who were brought to this country to play with John McCormack in his first talkie.” 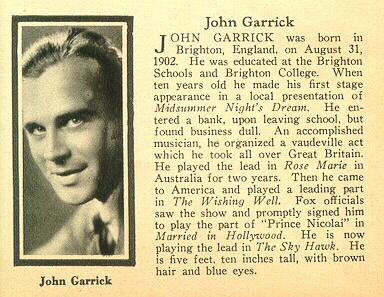 As far as I can tell, this film has never been on VHS or DVD, although one of my Moviediva correspondents informed me that it appears occasionally on the Fox Movie Channel. I saw it for the first time with my audience. There is no other movie like Just Imagine and the crowd loved it for its wacky humor (intentional and otherwise) and boggling bizarrity without judging its faults too harshly. It’s hampered a bit by the glacial pace of those early talkies, and the straight leads (Garrick and O’Sullivan) are pretty stiff. But the comedy romantic couple, Marjorie White and Frank Albertson are a couple of sparkplugs, and their duet, “Never Swat a Fly” is the musical highlight. 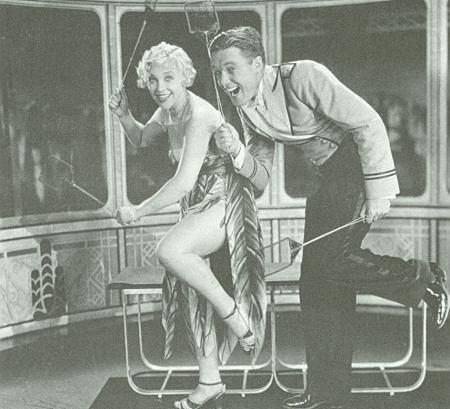 As science fiction, it concentrates on the visual in a an eye-popping swirl of MetaDeco. But, like lots of early SF, the fundamental attitudinal changes of the century regarding gender and race are unimaginable. Moviediva, jr. pointed out, “there are no African Americans in the future” nor any other minority, and feminism is a non-issue. And, we still don’t really want those darned Picture Phones, do we? My brother sent me a mix tape of novelty songs from his collection of 78s. One song (from the teens?) “In 1999” proposed three laughable developments of the future: we’d have a woman president, it would be easy to get a divorce, and we won’t be singing “Mammy” songs. Just Imagine! 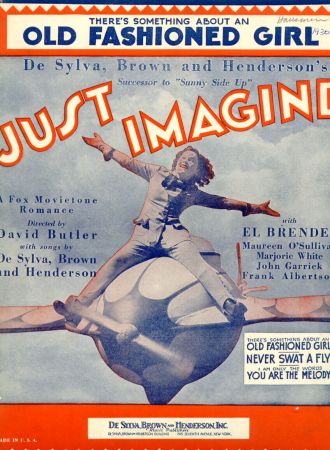 The “Old Fashioned Girl” was a flapper, of course. 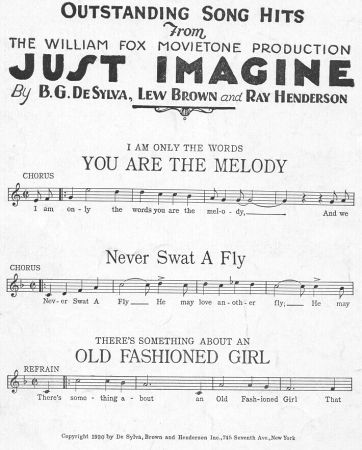 (Sources include Richard Barrios’ A Song in the Dark, The First Hollywood Musicals by Edwin M. Bradley, Celluloid Skyline by James Sanders (www.celluloidskyline.com)The Psychotronic Encyclopedia of Film, listing by Michael Weldon, The Great Movie Shorts by Leonard Maltin (I think this is the title, my brother read it to me over the phone) and The Talkies, edited by Richard Griffith. Production Still from Jerry Ohlinger’s Movie Materials Store, Joyzelle photo from Film Architecture, an exhibition catalogue edited by Dietrich Neumann, fan magazine photos from the February, 1931 Screen Secrets, White and Albertson from The Hollywood Musical, A Picture Quiz Book by Stanley Appelbaum, sheet music from Moviediva’s collection.)