Documentary filmmaker Kabir Khan fictionalizes his post 9/11 reportage in Afghanistan, as two Indian reporters (John Abraham and Arshad Warsi) search for a Taliban soldier to interview. Fortuitously (or not) their truck is hijacked by one, desperate to reach the Pakistan border. Dark humor (Arshad steals the film, flippant as a 1930s newshound) alternates with terror as they, their Afghan driver, an American girl reporter and the kidnapper argue over the blame for Afghanistan’s despoilment. Salman Shahid and Hanif Hum Ghum are also excellent, with only an overly made up Linda Arsenio as the Reuters correspondent failing to pull her weight. Beautifully filmed in Afghanistan, where the piercingly blue sky shimmers over the expanse of rubble and endless dusty roads.

Director Kabir Khan is primarily a documentary filmmaker, and had already made several non- fiction films in Afghanistan before shooting Kabul Express. He photographed his first documentary for the Discovery channel when he was just 24, and has directed films on subjects such as the Himalayas, Daniel Pearl, and the Taliban.

Kabul Express is loosely based on experiences he shared with fellow journalist Rajan Kapoor, but the lead characters are meant to be a fusion of both him and his colleague, tailored to the star personas of the actors. Khan has been to Afghanistan many times, as his family is Pathan, from the Afghan border regions. He was inspired to trace his heritage by Alex Haley’s book Roots (!) and feels a kinship with the area. Threatened by the Taliban during the freezing cold 45 day shoot, he finally consented to 60 armed guards for protection, at the insistence of the Indian Embassy. John Abraham, worried about the threats and unrest said, “I asked my driver where the suicide bombers came from. He said: ‘Either the right or the left or the front or the back. Allah can ask for you from whichever direction he chooses.’” (rediff.com). He became quite ill during the shoot, in part because, as a vegetarian, there was little for him to eat in this meat eating society.

Arshad Warshi probably would be a leading man if he looked like John Abraham. His career was stagnating until he played the hero’s sidekick in one of my favorite Hindi films, Munnabhai MBBS, about a gangster who cheats his way into medical school to please his exacting father. Arshad’s portrayal of Munnabhai’s raucous best friend, Circuit, was celebrated as an important part of the film, and he briefly had his pick of more high profile projects like this one. Back in brainless comedy parts once more, he seems to be scrounging for parts again.

Linda Arsenio seems to have been cast solely on the basis of her willingness to film in Afghanistan. The NCMA audience agreed that her poor acting skills damaged the effectiveness of the film.

Only a handful of films have been made in Afghanistan since the rise of the Taliban. David M. Halbfinger in the October 4, 2007 NY Times reported, “ in January in Afghanistan, DVDs of Kabul Express — an Indian film in which a character hurls insults at the Hazara ethnic group — led to protests, government denunciations and calls for the execution of the offending actor, who fled the country.”

Although the Taliban destroyed nearly all the movie theaters in Afghanistan, pirated DVDs of films, particularly Bollywood films, remain a vital component of local entertainment. Afghani people are also devoted to Hindi language soap operas, dubbed into the native Pashto, where the characters have become household names. One character, Tulsi, on the blockbuster soap Kyunki Saas Bhi Kabhi Bahu Thi (Because a mother in law was once a daughter in law) is so popular that the Indian government considered enlisting her as a spokesperson in a campaign against the thriving opium cultivation trade. “If Tulsi was to contest elections against President Karzai, I will vote for her like most Afghanis” said one devoted fan.

Hindi films songs blast from every taxi, bus and shop, in spite of the strict Taliban edict against popular entertainments, including movies, songs and kite flying. Hindi stars endorse products sold in Afghan shops. Posters for Bollywood films playing in the three functioning cinemas play to packed houses. In Kabul Express, the Indian reporters are given special privileges because they come from the home of Shah Rukh Khan and Amitabh Bachchan, exactly the same reason that the filmmakers were given unusual access to make this film. A year after its release, “Surprisingly, there are hardly any Afghans who have seen John Abraham’s Kabul Express which was based on the turmoil and tragedy of Afghanistan” writes Pratibha Chauhan, “Most people say neither have they seen the movie, nor do they intend doing so, as only negative things have been shown. There are hardly any Afghani movies and the few which were made prior to the ban by the Taliban are not liked by the people.”

As is so often the case, not only do the Afghan people not want their misery exported for the entertainment of international audiences, instead craving the escapism of which Bollywood is the master. 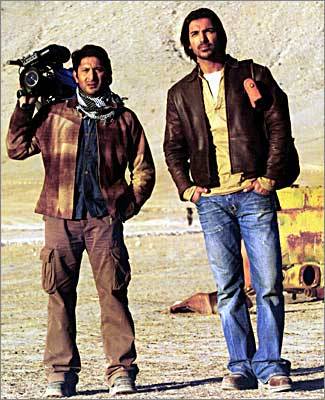