Rupert Pupkin, an aspiring comic living in his mother’s New Jersey basement, is convinced he deserves a shot with the King of Late Night, Jerry Langford.  An everyday schlub, hungry for fame, he stalks his idol, a career plan which takes increasingly desperate turns in this film made before, but foreshadowing, the longing for celebrity in the reality tv and internet era.   “It’s very funny, and it ends on a high note that was, for me, both a total surprise and completely satisfying. Yet it’s also bristly, sometimes manic to the edge of lunacy and, along the way, terrifying” (NY Times)

The King of Comedy was not particularly well reviewed when it came out.  Financially, it was a flop.  And even amongst the volumes on the huge shelf of Martin Scorsese books at Duke’s Lilly Library, no author thinks the film is anything other than an ambitious misfire.  One author wrote in 2008, “For years following its initial release some predicted The King of Comedy would one day be recognized for its brilliance.  This has not occurred and seems unlikely” (LoButto 260). 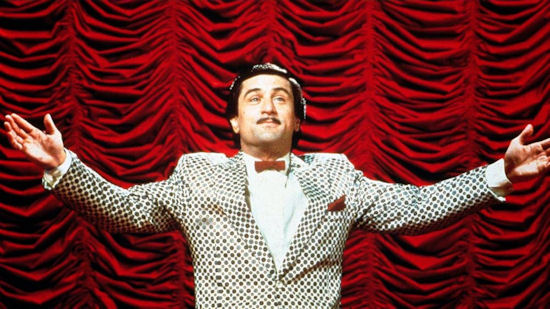 Scorsese’s first film of the 1980s was Raging Bull, still considered by many to be his masterpiece.  But, that film did only modest box office, failing to engage audiences the way the new blockbuster films, like Star Wars, did. In March of 1981, John Hinckley attempted to assassinate President Ronald Reagan, and cited his love for Jodie Foster in Scorsese’s Taxi Driver as his inspiration for his crime.  In fact, the 1981 Oscars ceremony, in which De NIro would win an Oscar for Best Actor for Raging Bull, was postponed a day because of the crime, and Hinkley asked if that would likely be the case when he was arrested.  Suddenly, Scorsese, auteur of personal films reflecting his personal background and his love of cinema, was subjected to intense scrutiny of the press who queried him on the relationship between celebrity and murder.  It was not long after Mark Chapman killed John Lennon, and two young actresses, including Teresa Saldana who had been in Raging Bull, were targets of murderous stalkers.

The King of Comedy had been written more than a decade before, by Paul Zimmerman, a Newsweek film critic, who had been inspired by a talk show in which host David Susskind spoke to obsessive autograph collectors.  Zimmerman saw them as predators, “who coveted a celebrity signature as kidnappers or serial killers related to their victims, the power of owning another person” (LoBrutto 254).  The script was passed around, and ended up going to Scorsese, who gave it to De NIro.  Zimmerman continued polishing the script, and De Niro negotiated with Israeli producer Arnon Milchan—according to some sources, an arms dealer!—(LoButto 256) to produce the film.  Scorsese had just returned exhausted from a lecture tour promoting film preservation, and he wanted to do an “easy” film.

Scorsese reread the script and found angles that interested him, as Dave Kehr said, “comedy as violence, comedy as salvation and comedy as psychosis” (Keyser 126).  In interviews, Scorsese felt that the film was almost a diary of the experiences he and De Niro had since Mean Streets.  Raging Bull had brought them both world-wide fame and admiration (and that Oscar for De Niro).  But, he was beginning to feel isolated, and his third marriage, to Isabella Rosselini, was falling apart  “It’s so grim.  For me it’s about how my fantasies and De Niro’s fantasies have come about.  We were like the guy in that movie.  We wanted to get into show business.  We were fascinated by celebrities.  Now, we’re a part of it.  It’s very strange” (Keyser 130).  Scorsese saw himself when he read the script again as both the desperate Rupert Pupkin and the smooth insider, Jerry Langford. 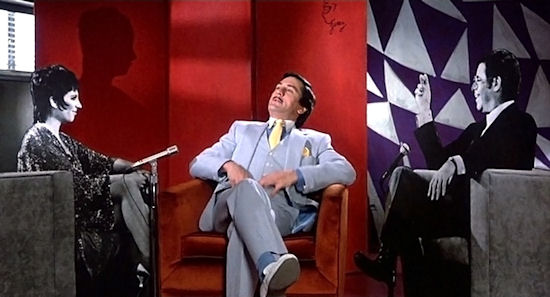 Zimmerman had envisioned Dick Cavett as the source for talk show host Jerry Langford, but Scorsese thought the more show-bizzy Johnny Carson was a better model.  Carson had no interested in acting a fictional role, and Scorsese turned his attention to getting Jerry Lewis to play the part. Perhaps, the real reason was that the film hewed too close to home.  After Carson’s death the FBI released 400 pages of documents about how much Carson, an intensely private man, lived in fear of his own fans, dozens of whom threatened his life (Cashmore 152).  As with so many celebrities, his fans thought they knew him, because he came into their houses every weeknight.  But, of course sane people know that is not true.  Rupert has fantasies about his relationship with Jerry Langford, and has trouble, like Travis Bickel, in separating fantasy from reality.

Jerry Lewis’ career had long dimmed, and casting him was both a risk and a stroke of genius.  Lewis commitment to the part was complete, he wore his own clothes, and was accompanied by his own Pekinese dog.  He was in fact the only person on the film that understood the lifelong burden of being a celebrity, and his showbiz tales were incorporated into the script, like the encounter with an ungrateful fan who lashes out that he “should get cancer” was one that actually happened to Lewis.  For the scene in which Jerry is angered by Rupert’s invasion of his country house, De Niro stood off camera, hurling anti-Semitic insults at Lewis, the anger you see on screen was genuine.  Lewis stayed mad, he was not sympathetic to De Niro’s method acting techniques.  But when he saw himself in the film, he realized what a terrific performance their skills had produced.  Lewis, himself a director, also did not understand why Scorsese and De Niro would do so many takes of a single scene, impatient with the repetitions they used to mine a new little twist on the characterization. 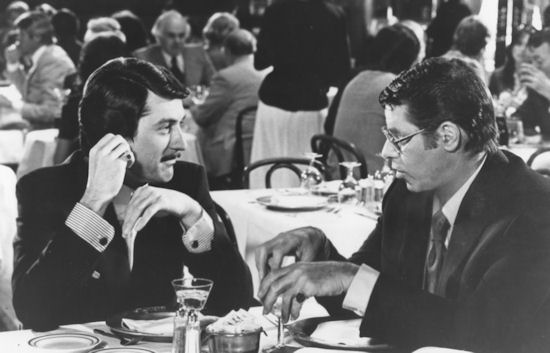 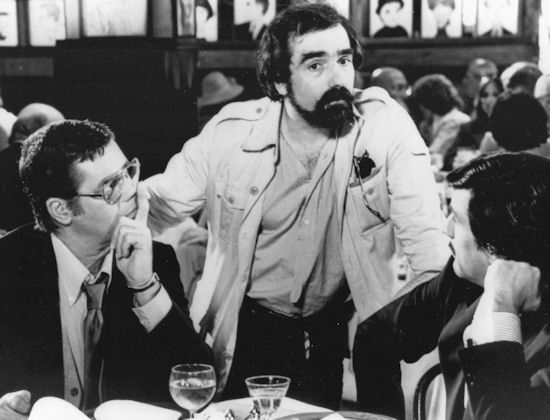 Sandra Bernhard was a wild card addition to the cast.  She was a stand-up comedian whose bitter routines were a New York staple in shows like Without You, I’m Nothing.  Masha was her first named character on screen, and she was acclaimed for her role, winning the National Society of Film Critics Award for Best Supporting Actress.  She is best known today for her recurring role on Roseanne.  Meryl Streep turned down the role, it’s genuinely difficult to imagine her playing this part.

There was a meta element to De Niro’s character, as well, his girlfriend, Rita, is played by Diahnne Abbott, was De Niro’s wife at the time. Scorsese’s own mother, off camera, voiced Rupert’s mother, and real life talk show fixtures, like Tonight Show producer Fred DeCordova, Tony Randall, and Dr. Joyce Brothers played themselves. And Scorsese himself plays the harried tv director coping with Pupkin’s surprise appearance. 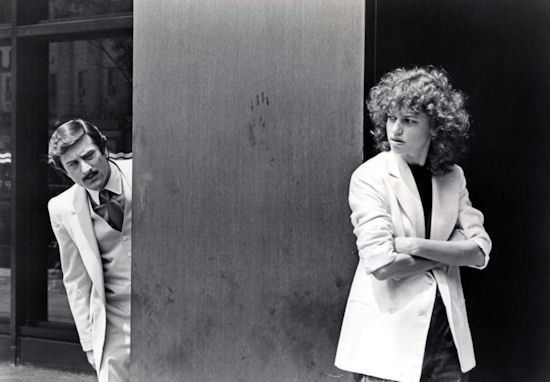 De NIro went to comedy clubs, and quizzed autograph hounds meeting them at their homes and joining them at their targeted gala events.  He recruited some of them to play themselves in the film. He also designed his own wardrobe.  De Niro said, “I had certain ideas about him, and that’s why it was fun—because with Marty I can say, ‘Let’s try this or that.’ Like the suit Pupkin wore—we just went into a Broadway store, and it was right on the mannequin, the whole outfit.  It was just, wrap it up and take it home, you know?” (Rausch 99).

Scorsese wanted the film shot like a tv show, with flat lighting and television screen shaped framing.  Getting the production started was complicated, as there was not the filmmaking infrastructure of today in New York City.  Jerry Lewis has said that it was his idea to name his character “Jerry” so if people called out to him during location filming, it would not ruin the shot, but I don’t see that tidbit (from the DVD extras) confirmed anywhere else.  The $14 million film went $5 million over budget, in part because Scorsese, recovering from pneumonia only shot between 4:00-7:00 pm.  The film grossed only $2 ½ million.  Audiences hated Rupert Pupkin.

But, we are living in the world wrought by Rupert Pupkin.  Perhaps, it began with the Jerry Springer Show (hosted by that Cincinnati politician who torpedoed his career by writing a check—a check!—to a prostitute). He featured regular people, ready, willing and able to humiliate themselves on tv for a moment of fame.  Today, self-manufactured celebrities like the ubiquitous Kardashians are considered worthy of our time and attention.  Reality tv in its many iterations saturates the airwaves.  If there are not Survivors or Housewives or young women saying Yes to the Dress, there are Idols and Voices and those who have Got Talent.  You Tube stars and Instagram Influencers reap huge audiences, and paychecks, devoid of mediation by the tastemakers of previous generations.  Whole networks seem to exist to validate Rupert Pupkins. And, of course, it’s superfluous to observe that the President of the United States, a former reality tv star, is now performing on the world’s biggest stage.

Stand-up comedian is a peak aspirational job for the millennial generation.  These comic aspirants have the swagger and the vocal rhythms of successful comics, but aren’t funny.  But, they submit themselves to the serial humiliation and brutal rejection that stand-ups must survive, in the hope that one day, they might be famous.  Interestingly, a recurring debate in discussing this film is whether Robert deNiro, typecast as a serious actor, was funny in this film, and whether or not he was even capable of being funny. Identified so closely with intense characters like Raging Bull’s  Jake LaMotta, and Taxi Driver’s Travis Bickle, his humor in this film was completely misidentified.  Now, that his career has expanded to comedic roles, in the Fockers films, The Intern, and on Saturday Night Live, whether or not he is capable of comedy is a debate that has disappeared. 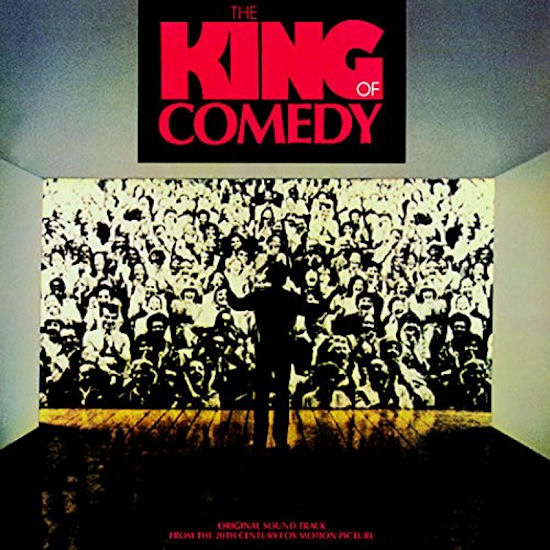