Two egomaniacal Broadway stars, played by preening Keel and Winston-Salem’s trilling Grayson, bicker through a musical version of Shakespeare’s The Taming of the Shrew.  Sadly, this brilliant Cole Porter musical won’t screen in 3-D, so Ann Miller can’t “tap into your lap,” but you can imagine it! “The most magical moment is when a very young Bob Fosse dances in “From This Moment On” to his own choreography…A treat, on no account to be missed” (BBC).  Shown with “Schmo Boat” a Biffle and Shooster short.

My Bob Fosse duo is a sterling example of how, even with our new DCP system, you can’t always get what you want.  I’ve been dying to show The Pajama Game, a criminally overlooked musical about raising the minimum wage—what could be more timely?  But, it has never had a Blu-Ray release or had a DCP made.  There is a 3-D DCP of Kiss Me Kate, which I’ve seen at Film Forum in NYC, but not 2-D, so we are watching a Blu-Ray tonight. But, if you wonder why Ann Miller flicks her scarf at the camera, or Kathryn Grayson flings her goblet, you have your explanation.

Kiss Me, Kate is about putting on a play.  Show business never tires of showing us their business, does it?  It won the very first Tony award for Best Musical, in a production starring Alfred Drake and Patricia Morison.  Cole Porter wrote it in response to Rogers and Hammerstein’s revolutionary Oklahoma, in which the songs were integrated into the action.  It would be Porter’s biggest hit, and the only one of his shows ever to exceed 1,000 Broadway performances.  But, since MGM couldn’t film it until it closed on Broadway, they waited and waited.  The 3-D, of course, was supposed to lure audiences away from their televisions, a labor in which we are still engaged!  Not every theater showed it in 3-D, even during the original theatrical release.  The Radio City Music Hall premiere was in regular Cinemascope. The ads touting “She’ll tap into your lap” changed to “see it without glasses” (Bloom 121). 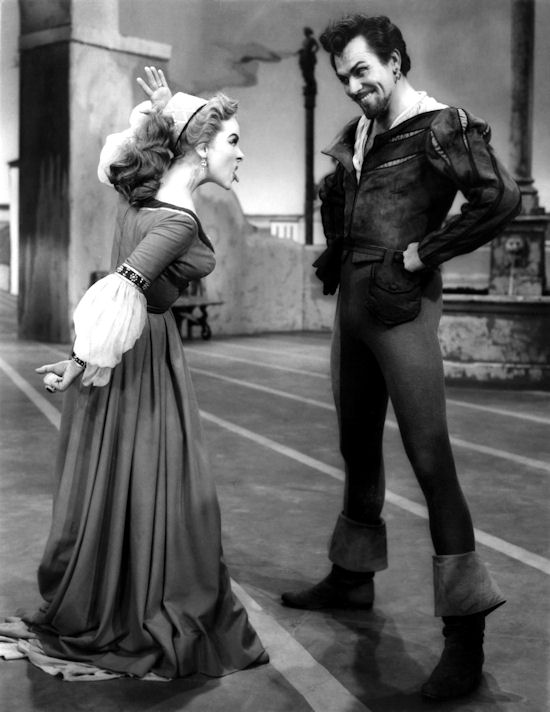 Writers Samuel and Bella Spewack used as inspiration the first hand tale of married Broadway stars Alfred Lunt and Lynn Fontanne feuding during a 1935 run of The Taming of the Shrew.  The Spewacks were evidently no strangers to bickering, themselves, and here they bring  theatrical hijinks to a fever pitch. Hollywood often thought they could improve on Broadway songs, but for once, kept Porter’s incredible score, with its complex internal rhymes and expansive melodies, even if some of the lyrics had to be censored for the screen.

Stolid Howard Keel stars, here completely in his element as egotistical Fred Graham.  I love him singing “Where is the Life That Late I Led.”  Born into poverty in Gillespie, IL, he began voice lessons late, at 20.  His deep bass baritone voice eventually led him to Broadway. He was playing the lead role in Oklahoma, while briefly still understudying John Raitt in Carousel.  One crazy day he sang both the lead roles on the same day, the only person ever to do so.

Kathryn Grayson was born Zelma Hedrick in Winston Salem NC.  She trained as an opera singer from the age of twelve.  Catching the eye of an MGM talent scout, the studio spent  2 years grooming her as a successor to Deanna Durbin.  After co-starring with Gene Kelly and Frank Sinatra in Anchors Away, the top grossing film of 1945, she went on to star in big MGM musicals like Show Boat, also with Howard Keel.

I’ve always had a soft spot for peppy tapper Ann Miller.  She lied about her age and started working as a showgirl at 13.  Discovered by Lucille Ball (and still lying about her age) she signed a contract at RKO, beginning a long film career.  Her best roles were at MGM in On the Town, and here, in Kiss Me, Kate.

And now, back to Bob Fosse.  Fosse set a record for eight Tony Awards for Broadway choreography, and won an Oscar for directing Cabaret.  He loved dancing since childhood. He thought his dream had come true when he landed a seven year contract at MGM, convinced he was going to be the next Gene Kelly.  This dream wasn’t destined to come true.  MGM screen tested him repeatedly, trying to find an image to promote and decided to capitalize on his boyishness, adding a toupee to his thinning hair. He had a decent part in Give a Girl a Break, and he befriended Stanley Donen, Kelly’s co-director on films like Singin in the Rain.  But rewrites for Give a Girl a Break stranded him with the MGM B team, Marge and Gower Champion and Debbie Reynolds.  His next film, The Affairs of Dobie Gillis, quickly disappeared from theaters.  His time at MGM was depressing and disillusioning, but at least he got to watch Fred Astaire rehearse for The Band Wagon.

His part in Kiss Me, Kate was his smallest, yet.  He was aghast at the way MGM prettified the backstage milieu, “No, they’re wrong…that’s not backstage. Everything was beautiful, glossy.  The real backstage that I knew was a jungle” (Wasson 78). But, the choreographer, Hermes Pan, said he could choreograph his section in the number, “From This Moment On.” This was the single song not original to the stage show, invited in from another Porter musical, Out of This World.

There were three couples in the number, all superb dancers.  Ann Miller and Tommy Rall, Jeanne Coyne (married to Gene Kelly at the time) and Bobby Van, and Carol Haney and Bob Fosse.  They were the third couple to dance in the number, and not only does the musical arrangement change to accommodate his style, but Fosse’s brief sequence points the way to the future of Broadway choreography.  There is even a hint of “jazz hands.”  After this film, he did the unthinkable, he walked out on the rest of his movie contact and returned to Broadway. 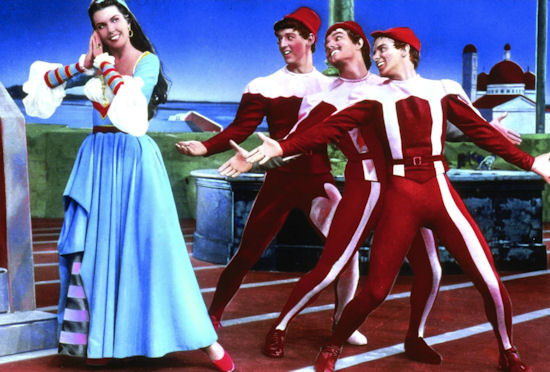 Fossse’s wife, Joan McCracken, got the entire production team of a new show, The Pajama Game to go to Radio City Music Hall and see her husband’s brief dance sequence on the gigantic screen.  He’d never choreographed an entire show before, so the producers were beyond nervous. But, seeing his work reassured them.  In The Pajama Game, “Steam Heat” danced by Carol Haney, would stop the show, and jolt Fosse’s career towards the Broadway stratosphere.

When Kiss Me, Kate began at the screening of the North Carolina Museum of Art, I had a moment of regret that I had programmed it. Was it not on TCM all the time? But, to my amazement, people began laughing at the jokes almost immediately (obviously never having seen it), and applauded some of the dance numbers as if it were a stage show. The enthusiasm confirmed the film’s delight, and its justified longevity on stage and screen.

Sources include: All His Jazz: The Life and Death of Bob Fosse by Martin Gottfried, Fosse by Sam Wasson, Hollywood Musicals by Ken Bloom.