Smoldering diva Maria Felix, known as “la devoradora de hombres” the man-eater, models for a sensuous nude statue, and her beauty ensnares a respectable man married to a delicate invalid.  “The most outré of melodramas, it’s a movie of flagrant symbols, blatant coincidences and astounding scenes… A femme fatale to rival any from 1940s Hollywood, Félix embodies a moral ambiguity beyond good and evil” (J Hoberman NY Times).

The Golden Age of Mexican Cinema is considered to be the 1940s and 50s, with a studio system, and a star roster, similar to Hollywood’s.  Mexico produced more Spanish language films than any other country.  As J. Hoberman described the Mexico at Midnight program at the Museum of Modern Art, which inspired me to program these two films, they “overflow with fatalistic tales of passion, jealousy and betrayal…part film noir, part grand opera” (Hoberman).  These melodramas were a response to Mexico’s post war modernization. Some of these films even played in the US, although one of them, the film we will see tonight, screened in New York sans subtitles. MoMA’s show had its origin at the Morelia International Film Festival in Mexico, where the director, Daniela Michel said the films depicted “political and social corruption, greed, international espionage, and even Freudian neurosis,” their audience a freshly created urban middle class” (Hoberman). 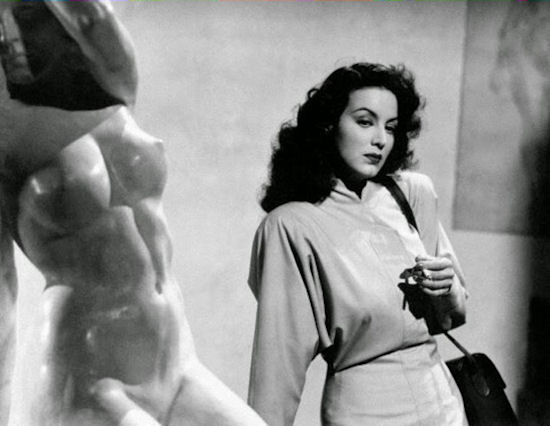 Roberto Gavaldon was known as the Master of Melodrama, as you will see tonight.  He was born in Ciudad Jimenez in 1909, a year before the Mexican Revolution.  His family was middle class but living in the region where the conflict was born divided his family.  He planned to become either an architect or an engineer and went to Mexico City to study, and to enjoy the intellectual and cultural influences of a sophisticated city.

In the early 1930s, he moved to Hollywood for economic opportunity, working as a waiter at the Roosevelt Hotel and as a nightclub bouncer.  As a friend of the Mexican actors who arrived in Hollywood at the dawn of the talkies to make Spanish language versions of popular movies, he also worked as an extra.  Returning to his native country, he worked a vast array of jobs in films, as an extra, prop man, soundman, editor and cameraman.  He assisted most of the important directors working in Mexico at the time.  He learned his craft well.  His first film as a director La barraca (The Shack) was based on a novel by Vicente Blasco Ibanez, whose books, like The Four Horsemen of the Apocalypse, Torrent, and Blood and Sand were often adapted for the American screen.  The Shack was praised for the realism of its meticulous Spanish atmosphere, but his subsequent films incorporated many of the conventions of film noir.  The greatest stars of Mexican films are considered to have played their most vivid roles in Gavaldon’s films.  He also directed La Otra (The Other One). 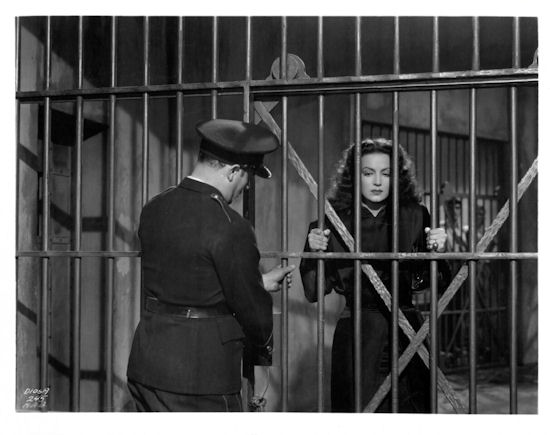 Maria Felix, La Dona, is considered one of the greatest stars, and most beautiful actresses of the Golden Age of Mexican Cinema.   She was born in Alamos, Sonora, Mexico in 1914, one of 12 children.  By the time she was a teenager, her beauty was attracting attention, and one day, while working as a receptionist in Mexico City, director Fernando Palacios convinced her to try the movies, becoming her mentor.  In 1943, she starred in Dona Barbara as a wealthy and tempestuous ranch owner.  Her next films confirmed her popularity with the public.  In her autobiography she wrote “With these films, I became the number one enemy of Mexican family morals…Somehow, I seduced the public, even those who criticize the conduct of my characters in the films. My legend began to take shape without moving a finger. The public imagination did everything for me” (Felix v. 2 p 27). Our film was introduced by Patricia Perez, the Assistant Counsel General of Mexico, who pointed out that, in a conservative country, Felix represented the image of a powerful woman not often seen on screen or in society. 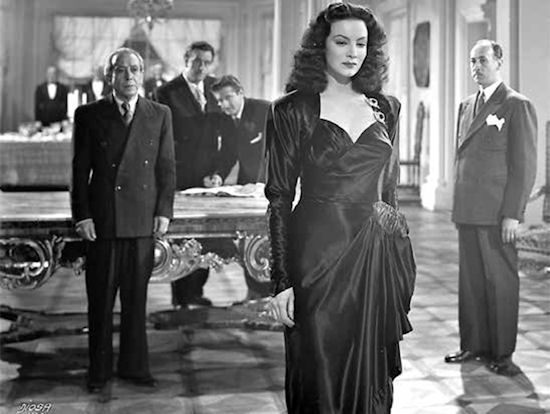 I wonder if she wore her own jewels on screen, like Marlene Dietrich often did.

She was never interested in Hollywood, complaining that they wanted to cast her in menial roles.  But she did turn down the leading role in Duel in the Sun, eventually played by Jennifer Jones, and The Barefoot Contessa, in which Ava Gardner played the title role.  Felix had four marriages, and many lovers.  She posed for Mexico’s most famous artists like Diego Rivera and Jose Clemente Orozco.  Composers wrote songs for her, and writers penned novels.  Dressed by the greatest couture designers of the era, she also had an extensive jewelry collection, including many extravagant pieces by Cartier. 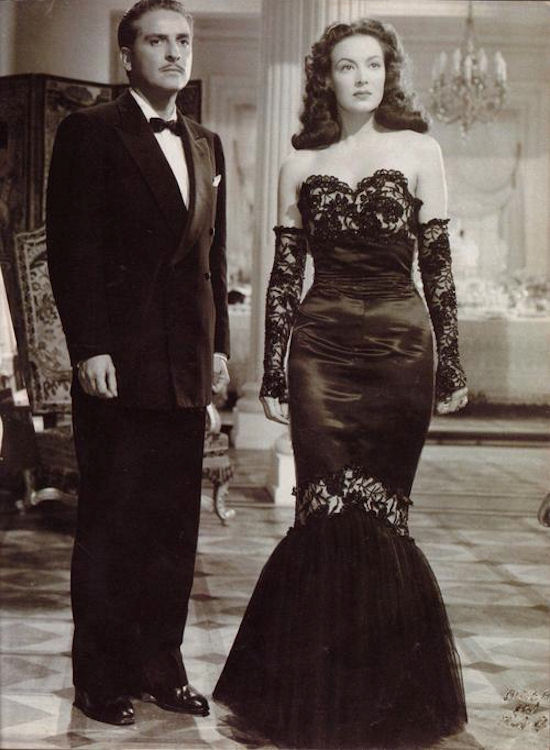 Arturo de Cordova was born in Merida, Mexico.  He was a big star in his native country, at first in adventure films.  He dipped his toe in the “Latin lover” pool in Hollywood, but played few roles, although he was the sexy pirate in Frenchman’s Creek.  Although most of his films were made in Mexico, he did make several films in Hollywood.  It’s also interesting to me to see Fortunio Bonanova, who plays Nacho, here.  He began his career as an opera singer, and sang in his native Spain, as well as Italy, Russia and France.  He wrote plays and operettas and acted on Broadway.  He made 102 films in Hollywood, many credited as nameless waiter, nightclub owner, chef, impresario, in films like Citizen Kane, Double Indemnity and An Affair to Remember.  To see him in such a large part, speaking his native language is a lesson in Hollywood stereotyping.

La diosa tackles one of Gavaldon’s recurring themes, death, in this case the death of a man’s spirit, as he is corrupted by his love for a femme fatale.  He loves the use of mirrors, used to demonstrate duality, and here, also the decay of the hero’s morality.  Because there was no Production Code in Mexico, this film is surprisingly sexy for a 1940s film.  I was stunned by how great it was when I saw it at the Cleveland Cinematheque, as well as by Felix’s on-screen wardrobe.  The dress near the beginning, with the giraffes on it?  To die for.  Apt for a film noir. 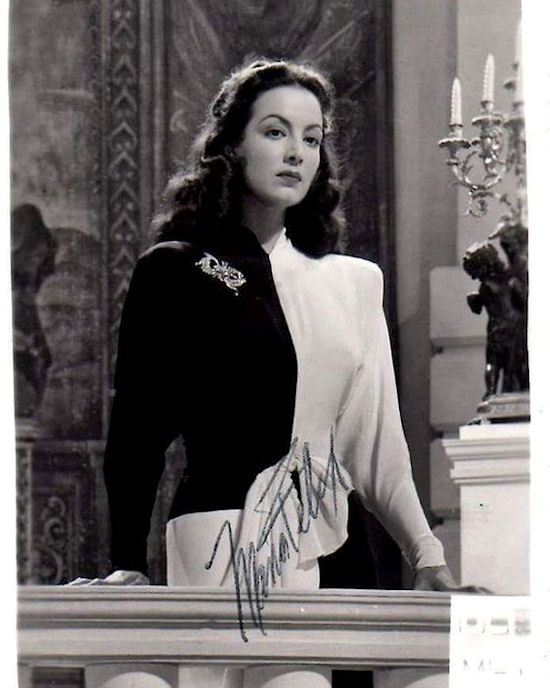 Half good, half evil.

Thanks to Jose Manuel Garcia at the Filmoteca UNAM

Mexican Cinema by Paulo Antonio Paranagua translated by Ana M. Lopez, Celluloid Nationalism and Other Melodramas by Susan Dever, Mexican Cinema Mexican Woman by Joanne Hershfield, “Opera Singers on the Screen” by Roi A. Useton in the May, 1967 Films in Review, Felix, María (1994). Todas mis Guerras, via https://en.wikipedia.org/wiki/Mar%C3%ADa_F%C3%A9lix ; https://www.nytimes.com/2015/07/19/movies/mexico-at-midnight-the-perfect-match-of-villains-and-foils-in-golden-age-film-noir/?_r=0 (This is a great article, and I’m sorry that the link is broken).