An intellectual slumming as a tabloid gossip wallows in the moral uncertainty of post war Rome’s “sweet life” in 13 scandalous tableaux. “Has not lost the power to fascinate, stimulate and provoke, and it remains a work of moral force and a visual delight” (Phillip French The Guardian).

In 1960, Rome was the place to be.  Tourists threw change into the Trevi Fountain, after the Hollywood romance, Three Coins in the Fountain (the theme song crooned by Frank Sinatra) became a smash. The Cinemascope photography in Three Coins... is so stunning, it made me want to jump right on a plane to 1954 Rome, although the plot made me want to tear my hair out.  Ben Hur and Cleopatra, two mega productions, filmed in the Italian capital.   In the wake of the A-listers were cut-rate actors, plunging into sword and sandal epics and cheapie Westerns.  The outdoor spaces of the Via Veneto were clogged at all hours with Hollywood actors and Rome’s glitterati, as well as the city’s flotsam and jetsam. They were tailed by aggressive photographers, soon dubbed paparazzi.  Journalists scrawled late breaking scandals, and messengered copy to their nearby offices by speedy Vespa. Romans called the time the anni caldi, the Hot Years.

Rome’s nightlife blossomed after the death of the conservative Italian pope Pius XII.  The city became a perpetual party, frolicking on the ruins of the postwar Open City.  In 1958, Fellini decided, after many false starts, to try and describe seven days and nights in the bubbling caldron of Sex, Scandal and Catholicism that was Rome.   La Dolce Vita portrays the void beneath the gaiety, but Fellini was painting a picture, not judging a sin. Many scandals, slightly fictionalized, ended up in his film. The most shocking one was the Montesi Case, in which a young woman, alleged to have overdosed at an orgy, was abandoned on the beach to drown in the early morning tide.  The son of Italy’s Foreign Minister supposedly confessed his guilt to the police, but the evidence was destroyed and shoulders were shrugged. Fellini said, “Rome was gradually becoming the naval of the world sated with living in a new jazz age, waiting for the third world war, or for a miracle, or for the Martians (Baxter 144).

Producer Dino de Laurentiis encouraged Fellini to cast Paul Newman (who was interested) in the role of the dissolute journalist. But, Fellini never seriously considered anybody but Marcello Mastrioanni, a slightly jaded leading man, already 35, more interested in women and food than his career.  Fellini loved his “air of vanity, moral flaccidity, decaying intelligence and fading beauty, fitting his protagonist like a tailored tuxedo.  The character was renamed “Marcello” (Baxter 147).  His picaresque adventure encompasses over 80 locations with hundreds of actors (Fellini consulted folders full of photos of interesting faces) as Marcello’s perambulations became the focus of the film. “Movies have now gone past the phase of prose narrative and are coming nearer and nearer to poetry.  I am trying to free my work for certain constructions—a story with a beginning, a development, and ending.  It should be more like a poem, with meter and cadence (Bondadella 71). 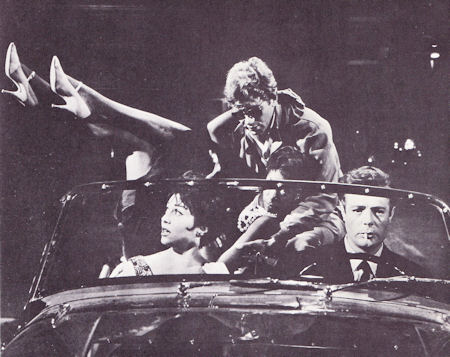 Anita Ekberg, a 4th place Miss Universe contestant, was cast as Sylvia, evoking the idealized blonde giantess so often the center of Fellini’s fantasies.  She first arrived in Rome to play a Queen in the cheapie Sign of the Gladiator, and she cut a swathe through the city, drinking, dancing barefoot and battling with her husband, another Grade B player.  When she cut her foot, and washed it off in the Trevi Fountain, the photos were published around the globe.  Fellini adored her, although the admiration was not mutual at first.  “The idea of the film is inseparable from the idea of Anita Ekberg” he said (Baxter 148).

Although the city of Rome gave Fellini permission to shoot on the Via Veneto between 2-6 am, the city never slept, and the director ended up recreating the street in the studio.  The Trevi fountain was not so easily reproduced and the actual location was used.  Neighbors with windows or balconies overlooking the scene charged large fees for a view.  Fellini ended up shooting 56 hours of film in total, editing the mass down to just under three hours. 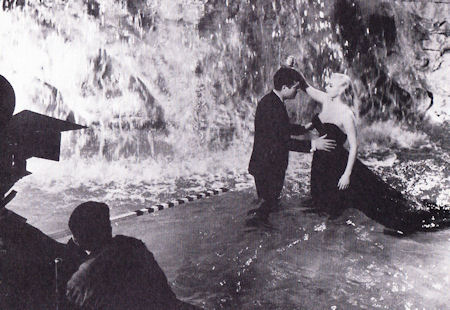 The first screening was not promising, the film was considered quite shocking, but at the same time, the mirror reflection of contemporary Rome.  The Vatican called it obscene and disgusting; any Catholic who saw it should consider themselves damned. The American press considered it an exploitation film, practically pornographic. Even Fellini’s mother reproached him.  Of course, it was a smashing success.  It won the Palme D’Or at Cannes, and played in the US without the condemnation it had suffered in Europe. Passed by both the Production Code and the Catholic Legion of Decency, Fellini was nominated for an Oscar as Best Director, the first foreign language director to receive that honor.

La Dolce Vita was a film that helped define its age. A huge moneymaker for its producers (but not its director, who traded his slice for artistic freedom) it won cinema prizes around the globe. A simplistic explanation of Fellini’s intent would be to say that the film contrasts decadence and corruption against innocence and faith.  “Perhaps the most original aspect of La Dolce Vita is that is creator is absolutely not morally outraged by the world he depicts and finds it incomprehensible that others are” (Bondadella 80).  He considered the film to be comic, which is why the characters could not be judged.

La Dolce Vita runs slightly less than three hours. By the end, the viewer is as exhausted and sated as Marcello. “Like many great movies—Intolerance, Greed, Ivan the Terrible—the length itself is already an event…Fellini’s initial concept was to show a series of anecdotes about an archetypical figure of society, the journalist.  He ended up painting a grand portrait of the whole world” (Kezich 203). 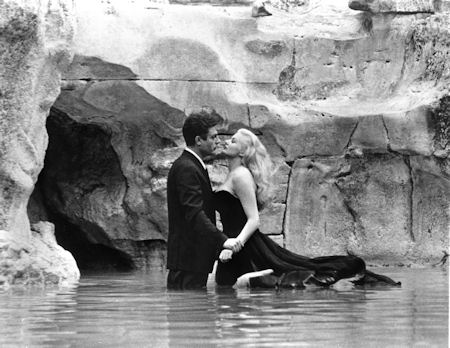