Did A really rendezvous with X in a sumptuous rococo chateau?  Penned by existentialist Alain Robbe-Grillet, the film unfolds and refolds, as Seyrig, in Chanel chic, glides to an ominous organ score. “Hopelessly retro, eternally avant garde, and one of the most influential movies ever made” (J Hoberman, Village Voice). New 35mm print.

Today, most moviegoers think of movies as escapist entertainment.  But, half a century ago, people also went to movies to be challenged, intrigued and inspired.  Last Year at Marienbad is one of the most influential films of the early 1960s and one of the key works of the French New Wave.  Although some critics felt the film was more rewarding to discuss than to watch, it forces the viewer to construct a narrative from a series of scenes which can easily be interpreted in different ways by different viewers.  No longer passive, the viewer must become an active participant in what unspools on screen.  As the camera glides through endless rooms and corridors, a love triangle seems to appear and disappear, and the subject of the film becomes time, imagination and illusion. As one film critic explained, “It happens to be a very unconventional film where the content can only be discovered by consideration of the structure” (231 Lanzoni).

Alain Resnais was born in France in 1922.  His father was a pharmacist, and as a boy, Alain suffered from asthma so severe, he was sometimes schooled at home.  He was a passionate collector of comic books.  His favorite character was Dick Tracy, and he eventually amassed one of the most extensive private collections of comic books in France.  He loved the movies, and acquired a camera, making his first 8mm film at 13. At 15 he saw a performance of Checkov’s “The Seagull” and suddenly decided to become an actor.  He studied acting and directing but was drafted into the army during WW II in 1945, where he served in a troupe which entertained Allied soldiers occupying Germany and Austria after the war’s end.  He began making 16mm documentary films after he was discharged.  Night and Fog, a disturbing exploration of Nazi concentration camps brought him critical attention in 1956.  His first feature film was Hiroshima, Mon Amour, in which he experimented with fusing past, present and future in one time line, a technique he also pursued in his second feature, Last Year at Marienbad. 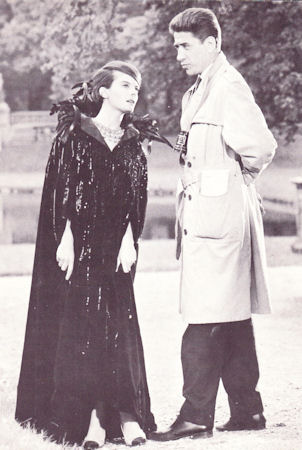 After the success of Hiroshima, Mon Amour, that film’s producers arranged to have Resnais meet with novelist Alain Robbe-Grillet, whom they thought might be a fruitful collaborator.  He was a major theorist of “le nouveau roman” the new novel, which featured ambiguous plots, because man was incapable of understanding “reality.” Resnais and Robbe-Grillet discussed using the flashback format, so common in detective films, to explore a more internalized reality.  A person’s memory is a constant, out of order flashback. Robbe-Grillet presented the director with four brief plot summations, and Resnais selected one.

Resnais felt, “the time has come to address the public in a new language…to train a camera on the inner minds of the characters, rather than on their external behavior.” He hope to present, “an attempt, still crude and primitive, to approach the complexity of thought and its mechanisms” (182 Paris). He wanted to illustrate the way people associate events in the past with events in the present.

Although now it is common to see films in which a plot synopsis is impossible or pointless, at the time, Last Year at Marienbad was unique in this aspect.  The film flows almost like a musical composition. Although the film is about a past, “last year,” Robbe-Grillet said, “An image is always in the present” which was one of the attractions of the cinema for him (Armes 105).  That is why there is a blurring between the dream, memory, and reality.  He wondered, “Why should a love story as it is related be clearer than a love story as it is lived?” (Armes 108).

The entire film, dialogue and visuals, was constructed by Robbe-Grillet, with Resnais’ direction helping him to realize his vision.  They wanted to recreate the look of a silent film, with Delphine Seyrig as inscrutably impassive as Greta Garbo or Louise Brooks. The whole crew went to watch Brooks in Pandora’s Box to soak up the atmosphere.  This was Seyrig’s first film (you saw her play the Fairy Godmother in Peau D’Ane last season). Resnais discovered her in a New York production of an Ibsen play.  He wanted her to be extremely glamorous, and she felt uncomfortable in such a role, “It’s a role for Grace Kelly, not for me” she said (Ward 73). Shortly before filming, she got a haircut which meant the on-set hairdresser had to create a sleek, new hairstyle for her.  Resnais worked with her carefully to craft a series of evocative poses, since erotic love is created from the participants’ fantasies.  She is dressed in a dazzlingly chic Chanel wardrobe, sometimes in black and sometimes in white, to create an atmosphere of uncertainty, or perhaps merely to evoke how little men notice what women are actually wearing, even when they are infatuated with them. 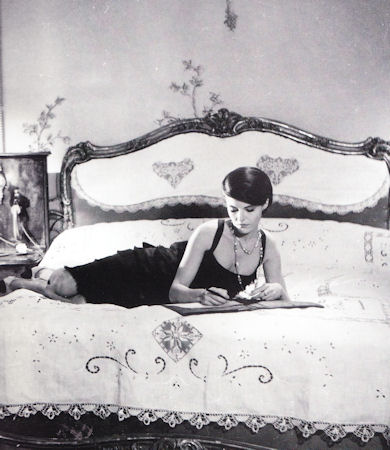 Seyrig in a black Chanel dress 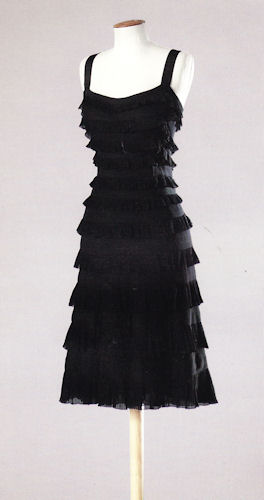 The same dress in the collection of the Cinemathéque Française.

Because Resnais wanted stylized acting, he chose all his performers from the theater, rather than film.  Giorgio Albertazzi was from Italy, and Sascha Pitoeff, as well as Seyrig, were from the Paris stage.

The film was shot in Munich, Germany, in the Nymphenburg, Schleissheim and Amalienburg castles in the fall of 1960.  Using an imaginary geography of the three castles, in which a doorway in one opens into a room in another, with the rooms always changing and shifting as the different memories creates a labyrinth, a dream within a dream.  “How easy it is to get lost!” (Ward 45).  The name, Marienbad, like Manderly (in Rebecca) or Xanadu (in Kubla Khan by Coleridge) takes on the quality of an “enclosed, luxuriant world” (Wilson 69).

Because Renais had signed the “Free Algeria Manifesto” against French war in Algeria, he was banned from the Cannes Film Festival that year, but his film won the Golden Lion at Berlin, the Best Film at the 1962 British Academy Awards and was nominated for a Best Original Screenplay Oscar. The ultimate art house film of the 1960s, Last Year is a mystery, a love story, and surely one of the most exquisite black and white films in cinema. 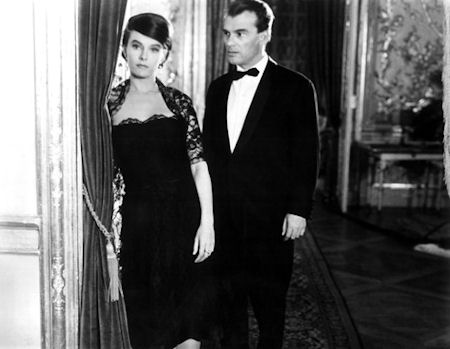 “While some dismiss the entrancing Last Year at Marienbad as a hollow, sterile exercise in style, this viewer considers it the most brilliant, daring and provocative experiment in film history (185 Paris). When shown at Berlin, one judge said, “We hope that the lyrical dream world that is to be found I the picture will appeal to the collective unconscious of people in all countries” (182 Paris)

“The chief difference between Marienbad in 1962 and Marienbad in 2008 may be how many people are willing to tolerate that distress and walk into the theater in the first place. To revisit Marienbad today is to glimpse a vanished moment when American audiences drank in European films not because they were universal or “relatable,” but for their otherness, their impenetrability, their defiant contrast to the simplistic and elephantine Technicolor epics that much of Hollywood was then embracing” (Harris).

“This was the era of the great “art house” cinema. At the time Marienbad arrived in theaters, film enthusiasts had just experienced Antonioni’s L’Avventura, Fellini’s La Dolce Vita (which we will show in two weeks) and Bergman’s Through a Glass Darkly. The film was considered a significant cultural experience, validated by the Museum of Modern Art, which scheduled a week of screenings before the film’s official American premiere.  “Patrons received programs with three pages of explanation that began, “The film you are about to see will, in all probability, upset every normal viewing habit you have formed…The meaning is not imposed on you,” it continued, “but rather, with a respect for your intelligence that is uncommon in the cinema, your collaboration is required to complete your personal understanding” (Harris).

In a recent New York Times review, Mark Harris says that in 1961 one syndicated columnist “confirmed its status as a cultural totem for cocktail hour, writing, ‘The surest way to get a party off the pad and into orbit this season is to ask, ‘And how did you like ‘Last Year at Marienbad?’”

Emma Wilson, writing about Resnais, emphasized how “difficult” the film was, but she seemed mostly to be flattering her own perspicacity.  For anyone who has watched Memento, Inception, Pulp Fiction, Groundhog Day or any of the many films which play with a flashback structure, Last Year at Marienbad should seem like elegantly familiar territory. 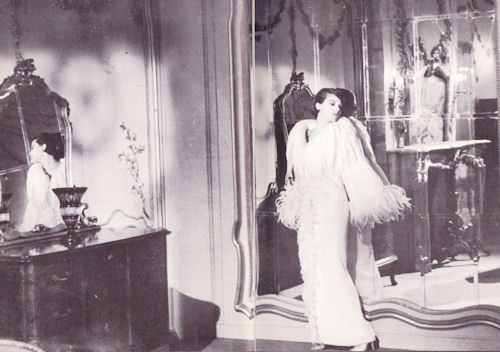