Juliette flees from her boring newlywed life aboard a river barge, deserting the man she loves. One of the screen’s transcendent love stories, sensual and dreamlike, was directed by a 29 year old genius who died before seeing it on the screen. “This is the kind of movie you return to like a favorite song”—Roger Ebert.

Jean Vigo was born in Paris in 1905, to parents who were Anarchists dedicated to the overthrow of the French government. His father’s name was Eugene Bonaventure, but he used the pseudonym Miguel Almereyda an anagram of the anarchist slogan “Y al la merde” literally, “There’s shit!” His anarchism flowed into a republican socialism as he became the publisher of a still radical newspaper. Arrested as a traitor and jailed, he was discovered strangled with his own shoelaces against his prison cell bars, although his death was ruled suicide. He was 34, his son, Jean, was 12.

Young Jean was sent to live with his father’s stepfather, a photographer, and it was no doubt here that his lifelong romance with the image began. He hated the boarding schools he attended, venting his anger in his film Zero pour Conduit (Zero for Conduct). His childhood was plagued with illness, foreshadowing his death by tuberculosis, or perhaps leukemia, at the age of 29. Vigo became enamoured of cinema, and was inspired both by the first serious writings about cinema in the 1920s and his participation in cine-clubs, which nurtured a love of film history. He fell deeply in love with another patient at a TB sanitarium where he was sent to recuperate, and he and Elisabeth Lozinska moved to Nice, home to the Victorine Studios, the French Hollywood on the Cote d’Azur. When the couple married, her father, a wealthy industrialist, gave the couple enough money so Vigo could finance a film independently.

Vigo’s career consists of four films, his entire output as a director lasts for less than three and a half hours. His first three films were short, a personal documentary called A Propos de Nice (1930) about the French city, a commissioned study of a French swimming star, Taris ou la Natation (1931) a surreal view of a nightmarish boys’ school called Zero pour Conduit (1932) and this film, his only full length feature. L’Atalante was shot mostly on location, including scenes of a despairing Depression era Paris rarely seen on screen. But the film has a dreamlike quality, on a barge floating on the river, and it is a film celebrating life, even though its director would not live to see it in the theater.

Vigo’s early films were uninfluenced by conventional cinema, perhaps owing their greatest debt to the magical films of early silent pioneer Georges Melies and his followers. Melies films were filled with the exciting discovery of cinema’s special effects, many of which were appropriated by the surrealist and avant garde directors of the 1920s. “The sense of magic and its relationship to dream and fantasy are essential elements in Vigo’s films and the French avant-garde and early primitive periods can be seen as having contributed to him the basic techniques of a magical mode of representation.” (Simon) His films were quirky and personal. Zero de Conduit contains distortions and ellipses owing more to avant garde films than conventional narrative. One of Vigo’s great admirers, unsurprisingly, was Francois Truffaut.

Zero de Conduit was called “anti-French” and banned for its subversive attitude. But, Vigo’s producer was not looking to the bottom line, and had a fondness for the director, so he financed what would be Vigo’s last film, L’Atalante. Perhaps he hoped that a more conventional film would contribute positively to the young director’s commercial reputation. Vigo cast one of the actors in his previous film, Jean Dasté, Dita Parlo, a well known German actress, another of her famous roles was in Jean Renoir’s La Grande Illusion, and the well known stage and film actor, Michel Simon. Vigo and Simon, the young iconoclast and the established star would create a memorable on-screen collaboration.

L’Atalante was the only film Vigo made which respects conventional narrative film, exploring sensual love and the conflicts that confront both the couple and those around them. It also incorporates an almost Surrealist world view, a “poetry of the unreal.” (Lanconi) and has an alluring strangeness unlike any other film.

L’Atalante took 11 weeks to shoot, during the particularly harsh winter of 1933-4. Outdoor locations from Le Havre on the coast to the network of canals around Paris were complicated by both weather and safety issues (canals and bridges were sometimes frozen) and if outdoor shooting wasn’t possible, cast and crew rushed back to the studio to try to stay on schedule. Vigo was unflagging in his inspiration and enthusiasm, remarkable in the fact that it was no doubt during the harsh outdoor location shoots that he contracted the illness that would shortly end his life.

The crew admired his tenacity and improvisation, Jean Dasté, a personal friend, and Dita Parlo had a different relationship with Vigo than the more famous Michel Simon. While the other actors were agreeable with multiple takes, Simon told him, “I hate doing a scene twice, the second time it’s necessarily a lie. Well, very few people understood that, apart from Vigo, Renoir and Guitry. Very few directors understood that the second time it’s already a lie.” (Temple). Simon’s character, Pere Jules, seems frightening, demented and retarded in turn, but shows an unexpected sweetness at the end. There could hardly be a more alarming person with whom to share the close quarters of a boat.

One of the most remarkable qualities of the film is the combination of the poetic and the documentarian impulses. The location filming on the canals gave the film an undeniable authenticity, and Vigo’s left wing sympathies with the common man fused into an unusual poetic interpretation that is rare in the history of film. Henri Langlois, founder of the Cinematheqe Francais wrote, “Seeing his films, one realizes that he is much more than a director, that he wasn’t content just to learn the language (of cinema) that he wasn’t exploring a foreign country. He was born there. That’s why he makes films as easily as breathing. He sees, he dreams, he thinks, he writes, he lives cinema…If the cinema is an art of sleep, there’s only one man who holds the key to dreams, Jean Vigo.” (Temple). The film played a great part on Langlois’ personal destiny, and by example, towards all of film preservation, for he said that it was seeing how L’Atalante was destroyed by the studio made him realize that he could never be as great an artist as Vigo, but he could preserve Vigo’s art. “This is not to suggest that Langlois vision is inflated or pretentious. It is just that few mortals have ever been possessd by quite such an overwhelming love and knowledge of cinema as the fervour that ran through Langlois veins, and so to compete or take issue with the founder of the Cinematheque is like telling Saint John that his gospel needs toning down a little.” (Temple).

Maurice Jaubert wrote the music for L’Atalante, as well as for Zero de Conduit. He and Vigo met when Jaubert came to accompany a cine-club presentation (he wrote scores for silent films at the end of the 1920s). He would go on to write scores for some of the most important French films of the early talkie era, and he and Vigo became close friends.

Vigo was too ill to participate fully in the editing of his film. Early versions were deemed unreleasable, and the studio demanded cuts to make the film more commercially viable and eventually, Vigo capitulated to the pressure, saying, “Je me suis tué avec L’Atalante.”(I’ve killed myself with L’Atalante ). Three weeks after the unsuccessful release of the film, he died, soon to be followed by his young wife. The film had some good reviews, but soon descended into limbo. His death cancelled many screenings. Vigo’s version was revised, with many scenes being cut and Jaubert’s score being replaced in some sequences by a popular song, “Le Chaland Qui Passe” which was also used as the title of the edited version. The film has quite frank sexuality for its time, the relationship between Jean and Juliette is undeniably carnal. Vigo’s films were banned in their entirety in France until 1945. There were attempted restorations in the 1940s and 50s, but the proper version of the film was only possible with the discovery of a print of the original L’Atalante, probably sent in error to London in 1934, at the British Film Institute in the 1990s. This restoration from that print was the first time a complete version of this film was widely distributed and L’Atalante was able to salvage its critical reputation.

The plot of the film is unremarkable; the director’s vision is all. “The power of L’Atalante is cumulative, as a series of what appear to be offhanded and quirky moments, both melodramatic and comic, culminate in a simple buy shockingly moving moment of rescue—from pride, from danger, from one’s self—that is a sure to provoke tears on each viewing as is the single transcendent sentence that John Wayne speaks to Natalie Wood at the end of The Searchers.” (Wilhelm). 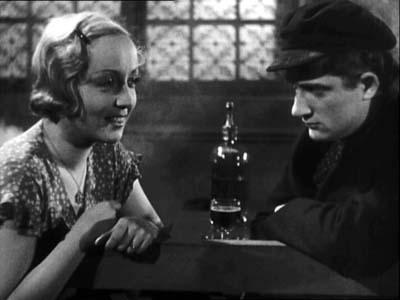