When L’Avventura (The Affair or The Adventure, depending on your translation) debuted at the Cannes Film Festival in 1960, the reaction was, to say the least, negative. During the screening, there were boos and hisses, and the end was greeted with laughter and catcalls. The next morning, 37 dissenters sent a letter of apology to the director, who was somewhat mollified by the award of a Special Jury Prize “for its remarkable contribution towards the search of a new cinematic language. French critic Robert Benayoun ( a great admirer of Buster Keaton) said it was, “the most important film since WW II after Citizen Kane.” L’Avventura is “a Rosetta Stone for post-1960 cinema and one of the greatest films of all time” (Elliot Wilhelm).

Michaelangelo Antonioni was born in the small town of Ferrara, Italy, and was one of the second wave of provincial Neo-Realist Italian directors (like Federico Fellini) following in the footsteps of their urban predecessors, Roberto Rossellini, Vittorio de Sica and Luchino Visconti. Antonioni became a film critic while attending University, and spent 3 months studying in the state film school before being drafted into WWII. Because he was a member of the Army Signal Corps, he was allowed to work as an assistant to several film directors, including on Marcel Carné’s Les Visiteurs du Soir a medieval romance that was a veiled pro-Resistance film. Antonioni began his solo career making documentaries. His 1956 film, Il Grido, gained critical acclaim for the first time, and during the dubbing (Italian films were not made with sync sound at the time) he met Monica Vitti, who would be influential in both his personal and professional life.

L’Avventura absorbs the bleak universe of the French existentialist novels of the time. An atmosphere of alienation was as vital to 1960s cinema as ironic detachment is in today’s films. Antonioni’s film refuses to conform to conventional notions of plot and character, and in fact is a reversal of Alfred Hitchcock’s famous pronouncement on the use of suspense. Hitchcock maintained that is was much more effective for the audience to anticipate an event, rather than being surprised by a sudden shock. Antonioni reverses this completely by supplying suspense, but foregoing the denouement. The emptiness of the modern world is inescapable; we have no alternative but to accept it.

“Antonioni eliminated everything that produced movement, incident, conflict or ideas. His reality is static. Anguish is the only feeling it inspires, and it is in this feeling that reality is reflected” (Liehm). The director himself said, “We live today in a period of extreme instability as much political, moral and social as physical. I have made a film on the instability of emotions, on their mysteries.” He also described the film as “a detective story back to front” and didn’t really care about the solution to Anna’s mysterious disappearance. “Someone told me she committed suicide” he said mischievously, “but I don’t believe it.” 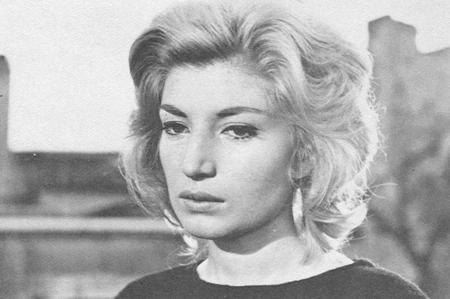 Much of the film consists of static landscape shots, and it appears to be a film “about nothing.” “With L’Avventura, Antonioni joined the tiny company of filmmakers in the sound era with sufficient inventiveness, courage and respect for the medium to offer scenes of great psychological complexity with little or no dialogue” (Chatman).

He was criticized at the time by those critics who felt that no serious work would concern itself with the trivial malaise of the upper classes. “Central to his films of the early 1960s was the plight of the emotional life, the life that lies beyond the visual façade we present to the world. That plight, he thought, is most acutely displayed by the affluent, because only they have the time and leisure to be preoccupied by it (Chatman). Antonioni himself said, “that he had chosen here the rich and leisure-minded to illustrate modern erotic decadence because to have set this story of Cupid’s wanderlust amid the working class or the poor would have suggested that circumstance alone drives people to escape life’s ugliness by way of animal pleasure” (Tyler).

The early 1960s was an extraordinarily fertile time for Antonioni personally, and Italian film in general. The 1960 Cannes festival also premiered Fellini’s La Dolce Vita and Visconti’s Rocco and his Brothers. L’Avventura gained much attention for its alleged immorality, and it was censored heavily. Two of the love scenes were considerably edited, and others were obscured by on-screen masking devices. The director was officially charged with obscenity and immorality, charges which were later dismissed. A scandal may have made him famous, but his style was already in place by the time notoriety arrived. The film was a great commercial success in Europe during that long vanished era when general audiences did not shun “difficult” films.

A film critic attending the 1960 Cannes Film Festival for Films in Review magazine wrote the following report: “Michaelangelo Antonioni’s The Adventure is a farrago of nonsense, and presenting it at Cannes is an insult to intelligent cinema. Scene after scene, each almost irrelevant to the one before, was protracted beyond the limits of boredom. I had the feeling that Antonioni, on the set, had said to the cast: ‘Well, that scene’s in the can. What shall we do next? No wonder the audiences at the 7 and the 9 pm showings whistled and booed, first derisively and then with hostility. The Adventure lasts 2 ¼ hours and begins with the mysterious disappearance of a member of the boating party (she was probably so disgusted with the film that she refused to continue). Her sweetheart and her girl friend join in a search, become lovers and go place to place for no reason. Why go on? The film needs to be cut—right down the middle. Antonioni and his star, Lea Massary (sic?) emerged from the festival theatre at 1 am in tears.”

The amount of personal hostility contained in a report like this says more about the reviewer than the film reviewed. The official review of the film in the magazine several months later was equally disdainful, and quite “tumescent” the sort of word I always had to look up as a teen in FIR reviews. 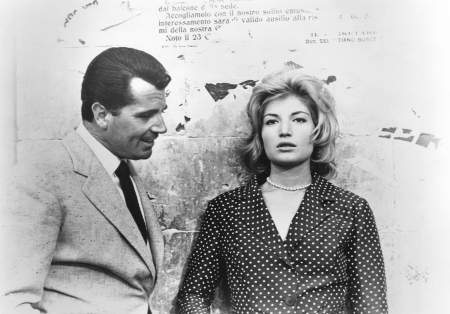 (Portrait of Monica Vitti from Chatman and Fink, two shot from Jerry Ohlinger’s Movie Material Store. Sources include: Italian Films by Robin Buss, Passion and Defiance: Film in Italy 1942 to the Present by Mira Liehm, Antonioni: The Poet of Images by William Arrowsmith, L’Avventura, edited by Seymour Chatman and Guido Fink, particularly the essay “All the Adventures” by Chatman and the biographical sketch by Fink, “Cannes 1960” by Dore Silverman in the August-September 1960 Films in Review, Classics of the Foreign Film by Parker Tyler, VideoHound’s World Cinema by Elliot Wilhelm).