Luchino Visconti (1906-1976) made relatively few films in his career. A member of the Milanese nobility, he became a devoted Marxist in his youth. His early films, like Ossessione, based on James M. Cain’s The Postman Always Rings Twice and La Terra Trema strongly reflected the philosophies of the Italian neo-realist movement of the 1940s. His first international success was Rocco and his Brothers, one of a trio of Italian films, along with La Dolce Vita directed by Federico Fellini and L’Avventura directed by Michaelangelo Antonioni, that rocked the festival circuit in 1960. Twentieth Century Fox Studios wished the successful director would give them a hit, too, and budgeted $2-3 million for an historical epic on the decline of the old Italian aristocracy. Their condition was that the leading role be played by an American movie star. This would be the most expensive film Visconti ever made, and since it echoed his parents’ marriage, in many ways it was also his most personal. Then, as so often happens, Fox panicked at the finished film and sabotaged its own investment, reducing the scale from 70mm to 35 mm, printing it in an inferior color process, cutting 45 minutes, and dubbing over the Italian dialogue, since at the time distributors routinely replaced non- English dialogue for American release. After the studio finished editing, even the film’s director couldn’t follow the plot.

Il Gattopardo was the only novel written by Tomaso di Lampedusa. He was inspired by the Allied bombing of Palermo, Sicily during WWII, in which his family palazzo was badly damaged. He equated this destruction with another historical event, the Risorgimento, when the 8 wildly differing Italian states were united by Giuseppe Garibaldi into the nation of Italy during 1860-65. In fact, social change was minimal, as the aristocracy was replaced by the nouveau riche of the Industrial Age, and Garibaldi’s dream of a populist state fell by the wayside. Lampedusa, fatally ill with cancer, was researching his grandfather and decided to pay tribute to him with a fictional reflection on loss as a part of life, but also as integral to the natural cycles of existence. The image of the leopard as representing the Prince came from his family coat of arms. Completed in 1956, he couldn’t find a publisher, until an eccentric small press consented to a run of 3,000 copies. The book created a sensation, and eventually became Italy’s all-time best seller to date. The Leopard spent 38 weeks on the NY Times Bestseller List in the US.

The film rights were sold by the author’s widow, on the condition that Visconti direct. Although the novel was intimate and the film would be large scale, Lampedusa’s personal insight into the nobility remained. Visconti used as a model the marriage of his father, the Duke of Moderna, with his mother, the heiress of the industrial Erba fortune. He seemed to identify with both of the leading male characters, as an idealized version of his family. He said, “I developed an affection for that extraordinary character Prince Fabrizo di Salina…but he believed his world had to go, and that’s what I want to show in the film” (Fishgall).

Visconti’s version is a relatively faithful adaptation of the novel, although the book does not have introspective characters, nor are they physically described in great detail. The postscripts dealing with the fate of the characters were eliminated from the film, substituting instead the tour de force ballroom sequence at the end, which becomes an elegy, highlighting the themes of loss and regeneration, “if we want thing to stay as they are, things will have to change.” The novel centered on a solitary contemplation of the past. “In Lampedusa’s book everything about the ball is tinted with memory, ‘a color of burned and useless straw.’ In the film the ball is all movement, music, incandescent glitter and Angelica’s radiance. On film, the fire is burning; in the book, the flames have died to ashes” (Shifano).

Alain Delon and Claudia Cardinale were in Visconti’s earlier success, Rocco and His Brothers, and the studio had no objection to their casting in The Leopard. The lead role was another story. Visconti proposed Nikolai Cherkassov, who had played the title role in the Russian classic Alexander Nevsky. 20th Century Fox countered with Spencer Tracy, Gregory Peck or Marlon Brando. At the suggestion of Burt Lancaster, Visconti protested, “No, no cowboy actor, terrible, ridiculous,” but Lancaster was intrigued by the part, and it was his consent that loosened the studio’s purse strings. His interest in it was not because of sympathy with the upper classes, but his childhood experience in New York City with the vast human migration provoked by Italian feudalism, and his friendship with Italian-American Nick Cravat, who had been his acrobatic partner in a circus act.

Claudia Cardinale said, Visconti’s on-set treatment of Lancaster was “almost rude” a sign of his resentment at having a Hollywood star jammed down his throat. Only Delon had a private dressing room, but uncharacteristically, Lancaster refused to be provoked, realizing Visconti’s talent and appreciating his obsessive perfectionism. Lancaster often told the story about how in one scene, he had to take money out of a dresser drawer, “and when I opened it, I found magnificent silk shirts that had been made for me. I said to the cameraman, ‘does the camera see this?’ and he said no. I asked Visconti why are they there? He said, “You’re the Prince. Is for you to touch” (Fishgall).

The detail that went into the filming became legendary. The shirts of Garibaldi’s men were rinsed in tea, dried in the sun and then buried in the ground for the appropriate wear and tear. Old carriages were retrieved from funeral parlors and stables of decaying palaces. Troops were trained in historically styled drills, and 19th century riding styles. Claudia Cardinale remembered, “even in my purse that nobody saw I had real perfume of the period” (Fishgall). The ball was staged at the Palazzo Gangi in Palermo, still owned by relatives of the original family.

The ball was an historical metaphor, society has no place for “leopards” and is reminiscent of the ball that begins The Magnificent Ambersons. The filming of this one scene took 48 days, from 7 pm until dawn, because it was too hot to film in the daytime. Fresh flowers adorned the set, and candles had to be replaced every hour. Steaming food was brought from the production’s kitchen, just off set, and a nearby laundry continually washed the white gloves that would become sweat-stained after only a few hours. The guests were real members of the Italian nobility, some introduced by name, including Lampedusa relatives. 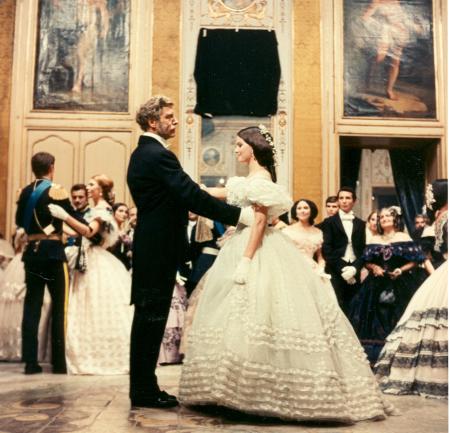 During the climactic waltz, Lancaster masked his severe knee pain from an injury he had sustained on an exterior shoot, and his willingness to submit to the discipline (and his later off-set explosion at the Visconti) cemented the mutual respect between actor and director. A sincere friendship was kindled, and Lancaster modeled many of the Prince’s gestures on Visconti’s. The director and star shared the same birthday, November 2, and Lancaster said in 1976 he felt they also shared the same “intellect, passion and love of work..” Visconti “was the most important director I worked for, because he opened for me a new world and a new way of doing things” (Fishgall). Freed from the burden of being a former circus acrobat who became a movie star, Lancaster always felt that this was his best role. Cardinale and Delon also admired their co-star, for both his performance and his professionalism. Cardinale said, “When Alain looks at Burt with great love for his Uncle, it was also for what Burt was, personally” (Fishgall).

The Leopard has a strong sense of place, and the locations, both the dusty countryside and elegantly crumbling palazzos, create a poignant atmosphere. Memorable shots are too numerous to mention, but one stands out; a crane shot sweeping the interior of a grimly graceful church follows the entrance of the Prince’s family while a distant wall, seen through the doorway, ominously reveals the scrawled name of Garibaldi. Lancaster plays his part with a surprising mix of grace and resignation; the Prince has no bitterness at the passing of the old order, understanding that change is an inevitable, if sometimes unwelcome, fact of life. Claudia Cardinale is fiery as the heiress engaged to the Prince’s nephew, her earthy beauty and hot blood are certainly going to help regenerate the moribund, inbred aristocracy.

According to the contract with 20th Century Fox, the entire cast had to speak English. Lancaster, realizing what a handicap this was to everyone but himself, told them they didn’t have to. This decision contributed to a linguistic stew; he spoke English, Alain Delon spoke French and the rest of the cast spoke Italian. Italian films are often shot silent and the dialogue dubbed in later, and it is surprising to hear Lancaster speak Italian in a voice that is not his. But, it’s not difficult to mentally superimpose his distinctive voice. Lancaster himself supervised the American dubbing of the film, but after the studio’s editing, it was hopeless. Only the current era, in which serious film goers routinely attend subtitled films, allowed The Leopard to be restored to its former glory. 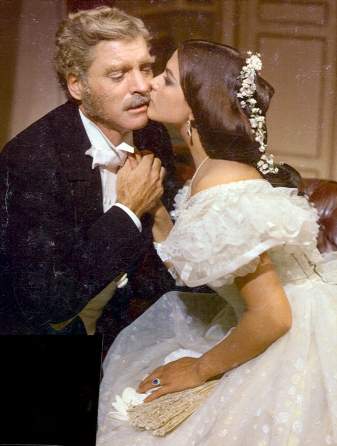 (Photo of ball from Jerry Ohlinger’s Movie Materials Store, Lancaster and Cardinale from Luchino Visconti by Geoffrey Nowell-Smith. Other sources include: Visconti: Explorations of Beauty and Decay by Henry Bacon, Italian Films by Robin Buss, Passion and Defiance: Films in Italy 1942 to the Present by Mira Liehm, Against Type: A Biography of Burt Lancaster by Gary Fishgall, Burt Lancaster: An American Life by Kate Buford, Luchino Visconti: The Flames of Passion by Laurence Shifano.