A timid Canadian librarian embarks on a long dreamed of trip to Paris to locate her distressed 88 year old Aunt Martha (French New Wave icon Riva in her last performance). Thoroughly inspired by Jacques Tati and the great silent clowns, the film is streaked with bright color, rattled by witty sound effects and splashed with slapstick.  “Thank goodness for burlesque duo Abel and Gordon. They are, simply put, the two funniest clowns working in cinema today” (variety.com).

Last week, I spoke about the world of movies that we never get to see.  If a film is in a language other than English, the difficulty is often compounded.  Lost in Paris made the round of film festivals; I heard of it because it was booked by the Siskel Center in Chicago, and the Cleveland Cinematheque, by programmers I admire.  Was it going to play theatrically in the Triangle, in spite of its good reviews?  Mais non.  In spite of the lively film-going community here, there are no regular local movie reviewers in the media, pointing us towards non-multiplex films.  Oscilloscope, the distributor, did not think that the local audience for Lost in Paris justified the advertising they think it would take to bring the film to theaters. Maybe when they see our box office report they might reconsider.  But, I doubt it.

The writer/director/stars of this film, Dominique Abel and Fiona Gordon, are married, this is their fourth film.. They met in the early 1980s at a Parisian theater school called Jacques Lecoq.  Gordon had a BFA in theater, from her native Canada and Abel, from Belgium, had a degree in economics before arriving in Paris. Their big city meeting inspired Lost in Paris. Abel said, “before Fiona arrived in Paris, her mother had told her, ‘You should put a Canadian flag on your backpack, so people won’t mistake you for an American.’ She didn’t do it then, but we did use it in the film. She also fell in the river, but that was in London actually, not in Paris (filmtalk.org). 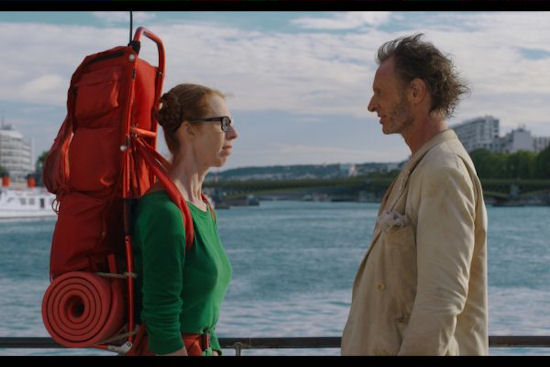 When their theater program was over, they didn’t want to leave Paris, so they decided to try and work together.  They were inspired by silent clowns like Charlie Chaplin and Buster Keaton and the French comedian Jacques Tati.  They created theater shows, first in front of tiny audiences, but they worked, like traditional vaudevillians, to hone their craft and perfect their style of quirky comedy over thousands of performances.  Then, they turned their ambitions to cinema.

“Our stage work was a wonderful training ground to develop ourselves” Abel said. “We played every night, always tried to improve, and we also listened to and looked at the audience, trying to feel what was right. With twenty years of experience on the stage, we take that with us in movies like Charlie Chaplin or Jacques Tati did. But it’s always a risk. The problem is also that on the stage you get the laugh from the audience right away, and in cinema you get it let’s say two years later” (filmtalk.org). 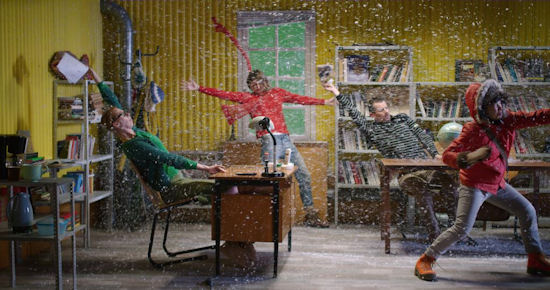 They were also inspired by another French comic filmmaker Pierre Etaix, who worked with Tati, and whose films have recently been reissued.  They invited Etaix to be in Lost in Paris, but he was too ill at the time, and was replaced by Pierre Richard on Aunt Martha’s park bench.  Richard is a beloved French comic actor, director and screenwriter, best known in the US for The Tall Blond Man with One Black Shoe, and a series of comedy films with Gerard Depardieu.

Aunt Martha is played by Emmanuelle Riva in her final screen appearance.  She was a serious actress throughout her career, best known for the French New Wave classic, Hiroshima Mon Amour.   Abel and Gordon were looking for an actress who actually looked old, quite rare, actually, Someone showed them a spontaneous dance she did for the New York Times during her 2012 Oscar campaign for Amour, and they were sold.  Gordon said, “In the beginning it was just a pretext for us to do silly things in Paris, but when we first met her, she nourished her character and made it come to life. So we wrote around her character. Unfortunately, she passed away recently [January 27, 2017, at age 89], but she lived in Paris in a little apartment, four flights up, there was no elevator, and she always was very passionate about her work. She had very high highs and low lows because she didn’t accept just any work. In real life she was very playful, so we put all of that in the film” (filmtalk.org). 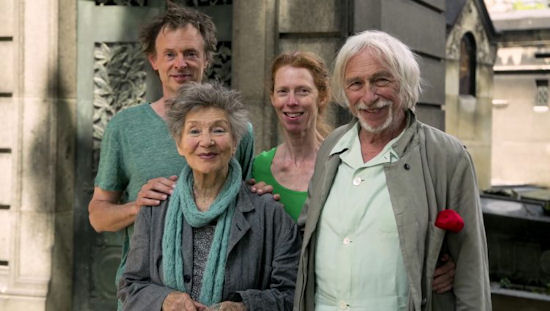 Abel said, “The problem is that you have to write a screenplay before they give you the money to do it. It’s impossible to read a burlesque script, and that’s what we do and just to make sure we’re not misunderstood, we always need to explain it. Most of the people who might read it, would say, ‘It’s not interesting, there’s no dialogue, no psychology.’ And if the script is too clever, it won’t be a good burlesque film. There are not too many clowns doing that work nowadays in cinema” (filmtalk.org).

Their usual technique is not to improvise, but to plan carefully, as evidenced by the controlled color palette of red, green and yellow.  Since much of this film was shot on location, they had to be more spontaneous. They couldn’t rehearse in the Paris Metro, for example, so they had to incorporate more improvisation. They were asked if what they did was fun, and Gordon said, “It’s fun when we’re writing and doing all this improvising, and everything’s possible, and it’s funny because there’s no pressure and no teams and crew or anything.  Then when we get to the shooting, that’s when the fun stops” (moviehabit.com). 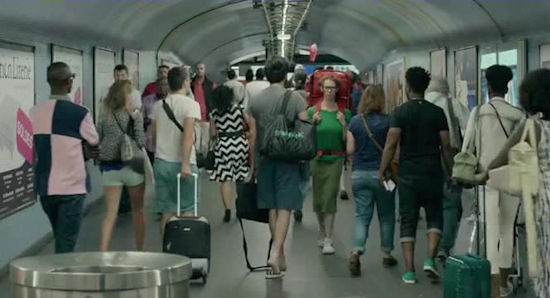 Abel said, “You are always closer to the human body of the actor if you don’t edit too much. You are closer to all his graces, all his talents and also to all his weaknesses, and that’s what makes a human being beautiful. You don’t get that when he’s perfect. He’s much more beautiful when he’s losing the rhythm, or when he’s nearly falling and getting back on his feet. We’re not afraid to show that. So we prefer the body showing the rhythm rather than the technique of editing taking over.” Gordon adds, “It’s perhaps linked to our past in theater – I’m not quite sure, because theater is so terribly different than cinema. But when an actor can go through a whole scene, there’s an emotion and a fluidity that he has created” (filmtalk.org).

Abel said, “You know when I was a kid I was watching TV, and there was always the Laurel and Hardy and Chaplin, and I felt so good to see those guys because it was like they could see through me and they knew what human being means. and was very profound — and light — that I didn’t know that I was going to do it because I thought was … I didn’t know how to do it — but as quick as I could do it, it was such a pleasure – to make people laugh” (moviehabit.com).

This film was a huge success at the North Carolina Museum of Art. The audience roared with laughter from the very beginning. Watching it again, I was conforted that Fiona and Dom (their names in the film) really are a couple, Dom’s appearance as a smelly vagrant is really a little alarming. Their physical comedy is amazing; Gordon can do such amazing things with her beanpole body. Their story-telling is excellent, with some hilarious jokes that take place out of sequence and are only explained later. Please search this delightful film out on Netflix, have a glass of champagne and watch it with your friends! 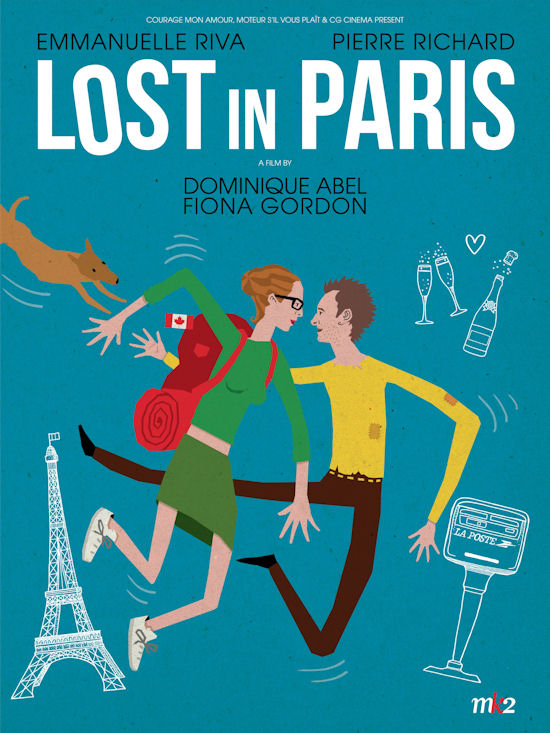