When a financial shark gobbles the retirement funds of a divorced London couple, they spin a James Bond-ian caper to recover their pensions.  Barely released in the US, this horribly titled film channels screwball comedy and witty 60s caper films.  “Take a deep breath, relax and go with it, marveling at how Hopkins managed to put together the perfect cast for this stupid—but brilliant—romantic comedy for the art-house crowd. Honestly, we’ve been starving for a silly yet truly funny movie of our very own (filmjournal.com).

The world is full of movies.  But we get to see only a fraction of them.  Many films are made just for the countries in which they are created, popular entertainments that never get an international distributor.  Often those films star people unfamiliar to American audiences, or they play in theaters without advertising to certain communities. Do you know the highest grossing Spanish language film in the US? It played US multiplexes, advertising on Spanish-language media. Instructions Not Included starring Eugenio Derbez might have been in the theater next to the one where you were seeing a Hollywood film, on the way to grossing about $45 million in the US. Bollywood films play every week in Cary, NC, but you have to know where to look for the listings: Yes, they are on Fandango! Other films are categorized as “art” films, with the gravitas that gets them nominated for a foreign film Oscar, and they might play a week or two in a specialty theater.  But, what if they don’t? Whenever I take a long flight, I love watching foreign language rom coms–using the same familiar formula, within different cultures. Rarely is one released in the US.

The film we are seeing tonight stars a former James Bond, Pierce Brosnan and Oscar winner Emma Thompson, but it was barely released in this country.  Apparently, it premiered at the Toronto Film Festival, but the distributor must have decided that it wasn’t worth the advertising budget that would make it an art house hit.  The stars were too old, perhaps, to interest the young men who write most of the movie reviews.  It seems to have played for a week in New York, and then disappeared.  I saw this film on Irish television last summer on vacation with my family.  We all laughed and thoroughly enjoyed it.  But, even trying to book it tonight had quandaries…was this film purchased by the distributor as some kind of tax write-off, like in The Producers?  This film is not great art, I admit it.  But, it’s escapist fun, something I am actively searching for in my entertainment choices.

Writer-Director Joel Hopkins pitched it to Emma Thompson by saying, “It’s like one of those 1950s Cary Grant movies, only in Surrey” (dailymotion.com).  He also thought that Emma Thompson and Pierce Brosnan would make a good on-screen pair, and they enjoyed working together.

“As actors like us get older, directors are always trying to find unique pairings,” says Thompson. “Sometimes you get ones that don’t make sense at all. But this one made people say, ‘Ooh, I’d like to see them together.’” “You want to see the sparks between us,” agreed Brosnan. “And now we only ever want to make caper comedies together. ”Good locations, good wardrobes, countries with lovely food and wine. ”Only more stunts for me next time,” insists Thompson. (thestar.com). 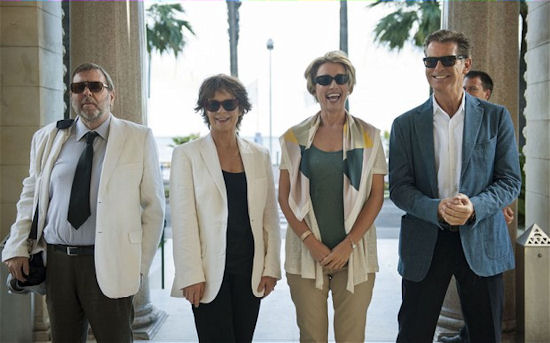 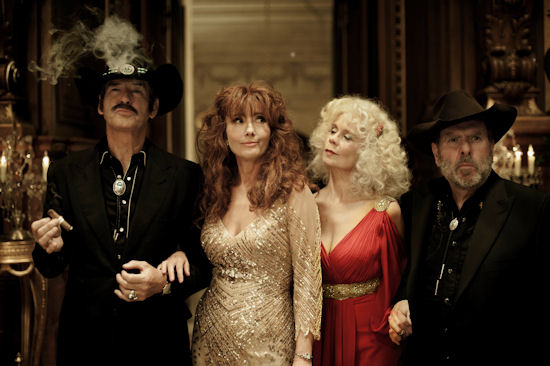 Thompson and Brosnan with Celia Imrie and Timothy Spall

The two of them constantly credit director Hopkins with keeping them on their toes and making the pace stay bright. “Joel would always push us on, saying ‘Faster, faster!’ every time we wanted to languish and do some acting” recalls Brosnan. “But I managed to squeeze some in,” says Thompson proudly (thestar.com).

In The Guardian, the reviewer mused that it was a similar situation to the one Michael Caine recounts in his autobiography:  he made Dirty Rotten Scoundrels because he opened the script and the first line was” EXT: THE SOUTH OF FRANCE.

Brosnan seemed to verify that in an interview, “Bliss, utter joy. It started in the South of France at the Carlton Hotel. I woke up, it was a gorgeous morning, I fed the seagulls that came to my little balcony suite that I had at the top of the hotel. I went down and we all met each other and we started the play. They had lovely French lunches where there’s wine — they actually sat us out front on the Croissette. Then we went back to work and continued our day, and that’s how the shoot went. So it was very civilized, very otherworldly romantic. I mean, it’s a retro-type film and a retro-type shoot, really” (metro.us) Thompson concurred:  ‘We’ve always wanted to work together. It was a no-brainer. We just said, “When do we start, when do we pack our knickers and toothbrushes? We’re ready!” Chemistry is an absolute mystery to me… we didn’t know it was going to work quite as easily as it actually did. But it was a joy.’

“Some critics have sniffed that the plot of The Love Punch is just a little, well, lacking in substance. At last year’s Toronto Film Festival Thompson remarked, a little icily, ‘I’m fascinated by the fact that at the moment we don’t seem to make films that are designed to make you happy from the beginning to the end. We actors always seem to have to be on some sort of journey or other. In the olden days we didn’t have to do that. Sometimes actors were required to entertain!’” (saga.com).

This film played to a sold-out house. The audience adored it, and began laughing from the very first scenes. One the way out, I overheard a young man (20s) and his girlfriend, he said, “This isn’t the kind of film I usually go to see, but I liked it!” Many people asked me why they had never heard of this film. See above. 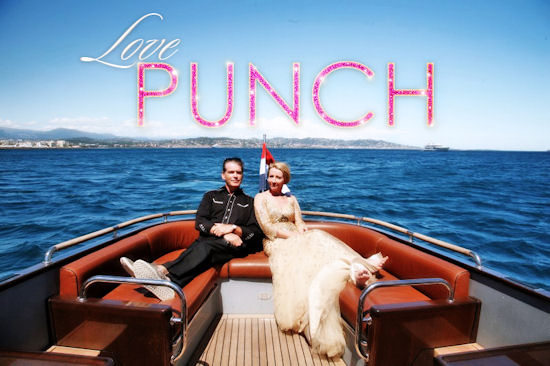