A skinny gal from the Chicago ‘hood dreams of becoming an international fashion designer. She juggles her ambitions with her love for a sexy local politico in this camp classic.   Ross designed the disco fabulous clothes, and sings the Oscar nominated “Do You Know Where You’re Going To?”  “Mahogany” is a big, lush, messy soap opera… Why should it have to make sense?” (Roger Ebert).

Mahogany is how we like to imagine the seventies, impossible glamour juxtaposed with grit, in a magical land where integrity triumphs.  The film asks us how we want to define success, on both the personal and professional level.  When I embarked on my research for my introduction I was surprised to discover that, while the library is full of books dissecting the cultural significance of the Blacksploitation heroine, researchers have cast aside the more conventional aspirations of Tracy Chambers, who wants to become a fashion designer.  Mahogany isn’t even name checked on page 4 in these books.  As always, the gun is perceived as being more powerful—and significant– than the sewing machine.

Downstairs, in the Finding Beauty exhibit, at the North Carolina Museum of Art, a similar attitude prevails.  When the Porsches were on exhibit, the copy twisted itself into pretzels trying to convince us that automotive design was art.  Perhaps, because this exhibit came from a history museum, the information provided, important and fascinating as it is, is cultural, there is relatively little about whether the clothes themselves are art, only that they allowed women to present themselves in a certain manner.  Couture IS art, by the way.

Tracy (Diana Ross) works days for bossy Nina Foch in the design department of Marshal Fields Department Store.  After work, she butts heads with her night school fashion design teacher, who chides her for her lack of classic simplicity.  In truth, she’s not getting anywhere with her crystal pleated chiffon rainbow colored poncho, but don’t tell her that!  She crosses paths with Brian Walker, a charismatic South Side community organizer with political aspirations.  Don’t be hasty, Tracy, he may end up President! 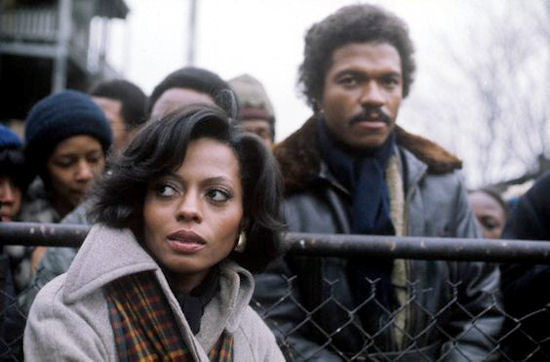 She has a thing for controlling men, there are three of them in this film.  The most poisonous is Sean McAvoy, played in high Norman Bates style by Anthony Perkins.  He creates supermodels, naming them after inanimate objects.  Beckoning naive Tracy to Rome, he christens her Mahogany, “rich, dark, beautiful and rare.”  Cue the high fashion montage, as Tracy becomes famous, and more in thrall to the vindictive Sean, who loves his power as a celebrity fashion photographer.  He is conflicted though, about his bisexuality, leading to the most ludicrous scene in the film, a mid-party, gun-fueled, phallic symbol showdown with Brian.

Tracy’s inability to control her own destiny is a reflection of her fraught relationship with her mentor at Motown Records, Berry Gordy.  As a member of the Supremes, she was a top recording artist, who was a major factor in the cross over of R and B artists to mainstream success. She had been romantically involved with him  (although they never married, they did have a child together) and as her manager, he exerted tight control.

As a teen, Ross aspired to be a fashion designer, and had studied design, patternmaking and sewing.  She took modeling and cosmetology classes, and worked in a department store, echoing the experiences of her character, Tracy.  She styled the Supremes in the early days, doing hair, make up and costumes for them.  Although Gordy, told the group, then called The Primettes,  to come back after they graduated from high school, Ross had the group stop into Hitsville, USA, daily, volunteering for hand claps and background vocals, until, renamed the Supremes, and with Ross as lead vocal, they started recording for Motown.  Between 1964 and 1967, they had 10 Number One singles, and, as Diana Ross and the Supremes, she continued with the group until becoming a solo act in 1970.

Her first starring film role was as Billie Holliday in Lady Sings the Blues (1972). Although Holliday’s heartbreaking battles with racism, sexism, poverty and drugs make this film a hard watch for me, Ross gives a raw, deeply felt performance.  She seems to have tapped into a great well of anger to play her character.  Billy Dee Williams, also in his first film role (he had been a stage and tv actor) overnight became a magnetic matinee idol, the likes of which had not been seen since Sidney Poitier.  In the Blacksploitation era, he was a rare sensitive role model, his character in Lady… a caring man who knew how to stand by his woman.  Ross was widely praised and garnered an Oscar nomination for Best Actress, losing to Liza Minelli in Cabaret.  It truly seemed like she was at the threshold of a new era in her career. 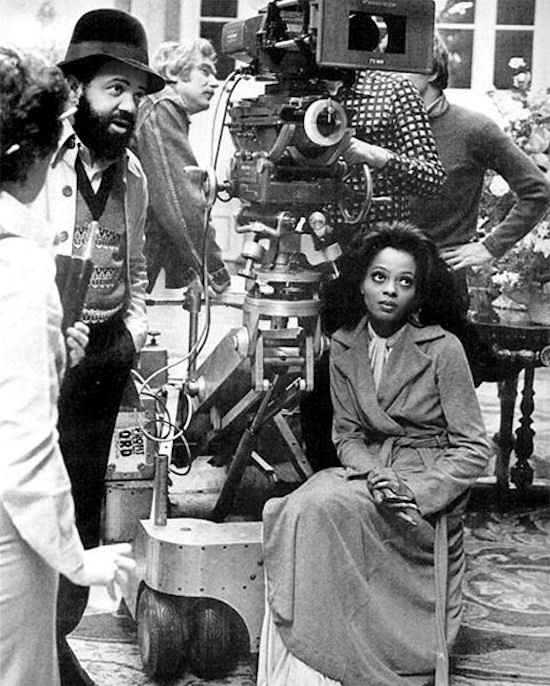 Berry Gordy dictated what projects she could consider next.  The film’s producer had a great (terrible) idea to star her in an update of Sabrina, with Ross in the Audrey Hepburn role, opposite Jack Lemmon.  Her agents at William Morris had an even worse idea, to remake Judy Holliday’s triumphant Born Yesterday. But Gordy put the kibosh on that, he didn’t want her to be “educated” by a white man.  The new head of Motown’s film division was a young wiz kid named Rob Cohen.  Cohen wanted her to play a part that was a role model, “I want Diana Ross to do a film that’s inspirational” He had a script that Barbra Streisand had turned down, written by the lyricist of Funny Girl, Bob Merrill, “I want to do a Joan Crawford movie, a tear-jerker, with Diana Ross as the star” (Taraborrelli 301).  He did a presentation for Gordy and Ross, and when Cohen said she could design the costumes, too, she became excited about the new project she had been waiting a year and a half to find.

The script writer, John Byrum, wanted to reproduce the on-screen chemistry between Ross and her co-star Billy Dee Williams.  He saw them as a modern day Gable and Lombard, and the audience loved them together.

The costumes are a mixture of appealing, Halston-y outfits, lots of jersey, wrap and tie, capes and billowing coats, and various ghastly monstrosities. The most unfashionable sequence is right at the beginning, where Tracy displays her “Kabuki” collection, filled with questionable cultural appropriation.  The only actual high fashion in the film is a charity fashion show dressed by Princess Irene Galtizine, a real life couture designer.  It’s no wonder that Tracy’s dragon lady satin gown is unappreciated, except as an opportunity to pounce by her third controlling man, played by Jean Pierre Aumont.

Ross was very proud of the 50 outfits she designed for the film.  She chose the fabrics, and other gliltzy materials like beading and feathers, and furiously supervised the workroom, a scene duplicated in the film.  Her influences were Japanese theater, and the designer Erte, who was having a renaissance in the 1970s. 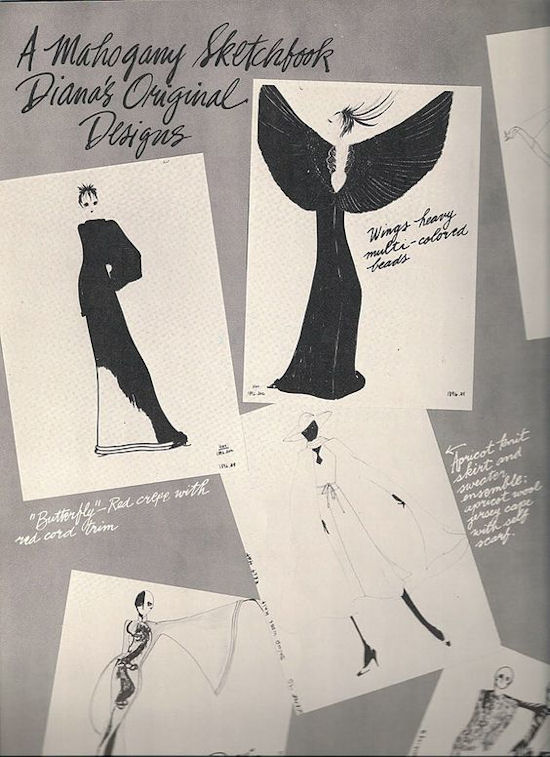 Filming did not go smoothly.  Gordy had hired the Oscar winning British director Tony Richardson to direct, and to say that he was not very sensitive to American racial issues seems an understatement (even though Lady Sings the Blues had been directed by a white man, Sidney Furie).  Fired during the production, Gordy took over himself.  Richardson recalled that Gordy said of Ross, “Oh, Diana isn’t a personality, she’s a product” (Taraborrelli 307) a line echoed by Sean as he dubs his creation after a block of wood.  The atmosphere on set was tense, and, it was the 70s, so there were a lot of drugs, cocaine, I presume.  Ross had been enjoying Richardson, who she saw as a sophisticated artist, and she was not happy about, once again, being bossed around by Berry Gordy.  Gordy filmed retake after retake, essentially doubling the budget of the film, whether through inexperience, perfectionism or just a desire to exert control over his star is debatable.

Anthony Perkins was discouraged when he realized Sean had been rewritten to evoke Norman Bates.  He had visited fashion photographer Richard Avedon (the inspiration for Fred Astaire’s character in Funny Face) to research his part and he was angry when he was urged to play “stereotypically faggier, cattier, more monstrously homophobic” than written.  Sean’s problem is unclear, according to the script, but Perkins “perverse brittleness has been so deftly channeled” his biographer found the performance “convincing” (Winecoff 353).  The experience had not been entirely a negative one, he got along with Ross, although not Gordy, but his reviews were crushingly brutal.

They filmed some of the Chicago scenes in a rough, gang-dominated neighborhood, where one night there were four murders near where the film company had set up shop.  The owner of the house they chose to be Tracy’s run-down apartment became so excited that the Motown company was using his property in a film that he renovated it extensively, all of which had to be dismantled so it looked like it belonged in the blighted neighborhood.

The song, “Do You Know Where You’re Going To” was released ahead of the film and immediate went to the top of the charts, becoming one of Ross’ most popular songs.  It was nominated, but did not win the Oscar, losing to “I’m Easy” from Robert Altman’s Nashville. 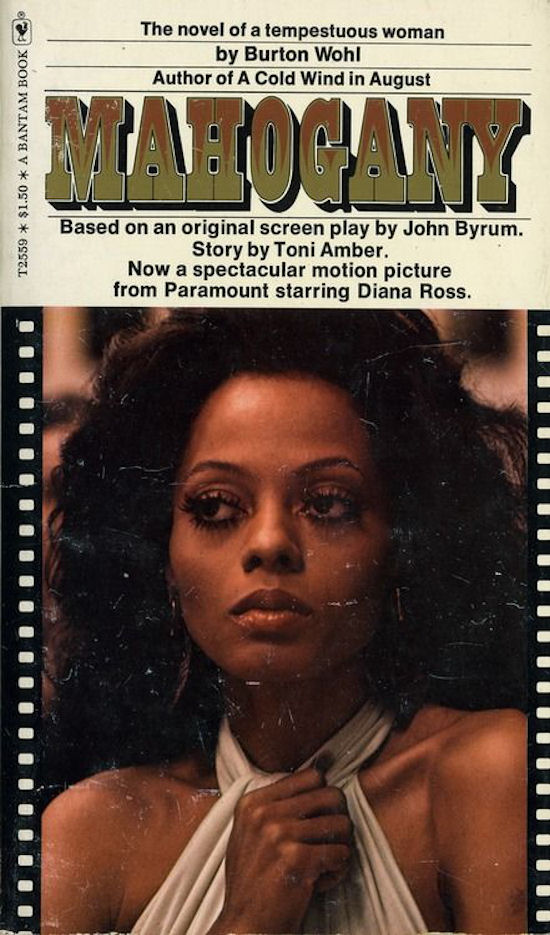 The advance reviews for the film were not good, but it was a huge hit, one theater in New York City showed it 24 hours a day.  Mahogany was not a blockbuster, but was especially popular with African American audiences.  And, needless to say, drag queens.

This film is an unabashed celebration of the beauty and celebrity of Diana Ross.  There may be some awkward dialogue, and dubious plot points.  But the film deals with serious questions.  How do you define success?  What compromises do you make in your personal relationships?  Or, as the film puts it, “Isn’t being rich and beautiful enough?”

The screening at the North Carolina Museum of Art was sold out, but iffy weather kept every seat from being filled. Nevertheless, the audience was enthusiastic and reacted to the twists and turns of plot. Two young women asked me why this film got bad reviews when it came out, and I said in the 1970s, women’s career aspirations were not always looked upon with favor, an attitude which seemed to them inexplicable. I was thrilled to speak with four Diana Ross superfans who travelled to the show, shared some photos of Miss Ross and their own experiences with her…I’m so flattered that they came and approved of the evening’s festivities! 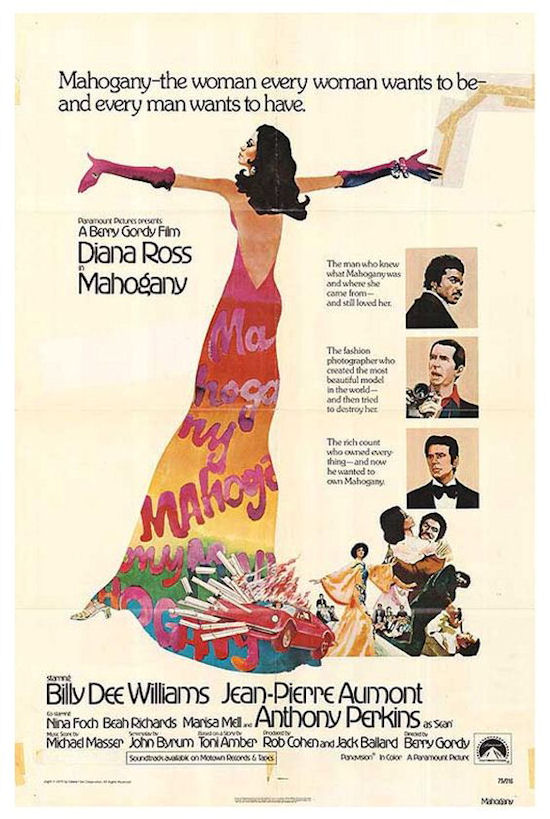