“The stuff that dreams are made of ”a priceless statuette is pursued by a duplicitous beauty, a fat man, and a Eurotrash weasel, mixing themselves up with Sam Spade, a knight errant who follows his own moral code. Huston’s first film as director set the stage for film noir. Library of Congress archive print.

The Maltese Falcon was based on a novel by Dashiell Hammett, serialized in five parts in Black Mask magazine in 1929 and published in book form in 1930. Warner Brothers bought the screen rights for $8500, and got their money’s worth, filming two comparatively undistinguished versions before this one, in 1931 and 1936.  Huston, who was already a successful WB screenwriter, wanted to be a director. He told Gerald Pratley, “They indulged me rather. They liked my work as a writer, and they wanted to keep me on.  If I wanted to direct, why they’d give me a shot at it, and if it didn’t come off all that well, they wouldn’t be too disappointed, as it would be a very small picture.  They acted out of friendship for me” (Luhr 112).

Huston would direct some of Bogart’s best pictures, and become his closest friend.  A man of wide ranging interests, including hunting, fishing, horses, art collecting, boxing, acting, writing, and women, Bogart admired his character and his talents saying, “Risk, action and making the best use of what’s around is what makes him tick.  When he isn’t actually on the set, he sees his surrounds as a forest of windmills, bottles, women, racehorses, elephants and oxen, noblemen and bums…the only real genius in Hollywood, a real poet” (Meyers/Bogart 115).

Huston had a unique take on this well used material.  He simply took the novel, which is written mostly in dialogue, and had it retyped by a secretary into script form. “The Maltese Falcon was done in a very short time, because it was based on a very fine book and there was little for me to invent.  It was a matter of sticking to the ideas of the book, of making a film out of the book…I tried to transpose Dashiell’ Hammett’s highly individual prose style into camera terms—i.e.  sharp photography, geographically exact camera movements, striking, if not shocking set ups” (Meyers/Bogart 124).  The cast were asked to study the novel, and Huston sketched the camera set ups and posted them.  He rehearsed the cast extensively on a closed set, so the shooting would go quickly, and, almost unheard of, he shot mostly in sequence. For good luck, Huston’s father, Walter Huston, played the bit part of Captain Jacoby, courier of the Falcon. 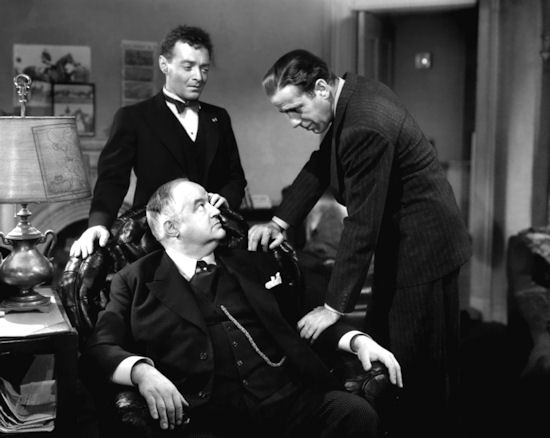 The script was approved by the Hays Office with minor changes, all of which Huston conveyed subtly through his directing.  Once the offensive dialogue was excised, the censors lack of imagination apparently meant they could no longer detect illicit sex and homosexual references. The casting department recommended George Raft for Sam Spade. Raft refused because the film was a remake with a first time director, and the role went to Humphrey Bogart, one of Raft’s many refusals that fueled Bogart’s march to stardom.  Geraldine Fitzgerald turned down Brigid, leaving the path open for Mary Astor, whose relative maturity (she had been in films since the silent era) enriches her character.

Astor said of Bogart, he “was a hard working guy, a good craftsman…His technical skill was quite brilliant.  His precision timing was no accident.  He kept other actors on their toes because he listened to them, he watched, he looked at them.  He never had that vague stare of a person who waits for you to finish talking, who hasn’t heard a word you have said” (Luhr 123).

Astor was a regular in the gossip columns for her stormy romances. She was John Barrymore’s lover while still in her teens, but became notorious during a divorce trial in the 1930s, when her estranged husband, seeking full custody of their daughter, published her diary, a steamy tome which rated her many lovers on their sexual performance.  Her preference was for unassuming looking playwright George S. Kaufman.  As Andrew Sarris, who adored her on screen lamented, “Mary Astor, alas, did not have to wait for posterity to label her as a slut.” This, however, made her perfect for the jaded Brigid.  Huston certainly must have found her attractive, since they had an affair during the filming. 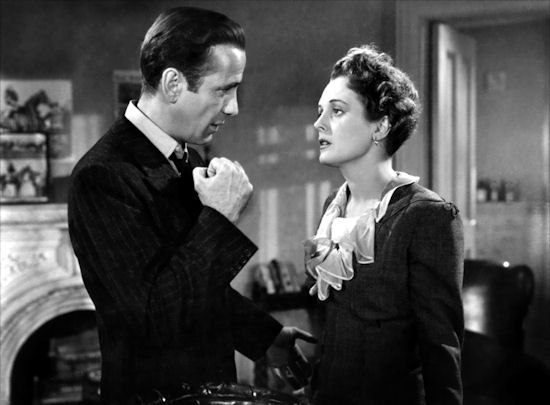 Sidney Greenstreet, a former tea planter in Ceylon and a British and American stage actor since 1902, made his film debut at the age of 61 as chuckling Caspar Gutman.

Peter Lorre, born in Hungary, came to the US in 1934 from Germany, after making an electrifying debut in Fritz Lang’s M.  John Huston’s casting rescued him from an eternity of B pictures; he was on his way to act on Poverty Row as King of the Zombies. Huston saw him as a gifted character actor.  “The flight of his talent was just unlimited.  He had himself such a rich and varied personality, that he could incorporate anything into it… He had that clear combination of braininess and real innocence, and sophistication.  You see that on screen always.  He’s always doing two things at the same time, thinking one thing and saying something else.  And that’s when he’s at his best” (Youngkin 178).

He too became a good friend of Bogart. “The Maltese Falcon was one of my happiest memories, a very nostalgic one, because for a few years we had sort of a stock company, an ensemble there at Warner Brothers…In each one of those people…this is one quality in common, that is quite a hard quality to come by, it’s something you can’t teach, and that is to switch an audience from laughter to seriousness.”

“Peter Lorre was one of the finest and most subtle actors I have ever worked with,” wrote director John Huston. “Beneath that air of innocence he used to such effect, one sensed a Faustian worldliness.” Huston recalled, “I’d often shoot a scene with Peter, and find it quite satisfactory, nothing more.  But then, I would see it on the screen in rushes, and discover it to be far better than what I had perceived on the set. Some subtlety of expression was seen by the camera and recorded by the microphone that the naked eye and ear did not get” (Youngkin 181) Lorre considered The Maltese Falcon to be his favorite film. 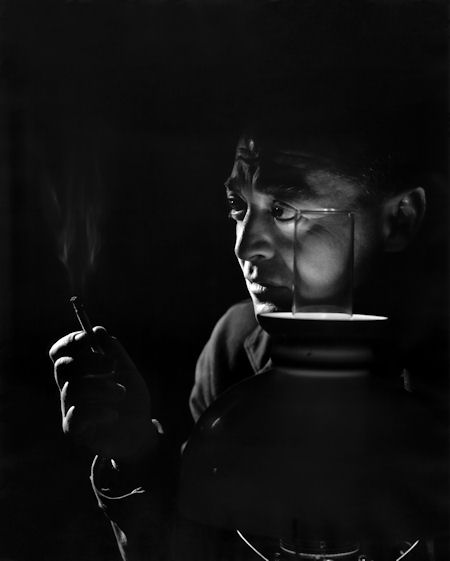 “One of his most celebrated performances, Lorre’s sweatily-permed Joel Cairo may be looking to steal a treasured lead falcon, but it’s his scenes he unfailingly walks away with. Quite how he managed to squeeze such gay abandon past the censors – so completely evident is it that there’s more to his and Sydney Greenstreet’s relationship than just boss and goon – is anybody’s guess” (BFI). Dashiell Hammett’s novel may have made such characterization more explicit, “This guy is queer” Effie informs Sam Spade before ushering him into the office, but Lorre’s discreet gestures – not least his business with the umbrella and later frisking of Bogart’s private detective Sam Spade – feel like a direct challenge to Jack Warner’s curt note to the actor, not to play the character “too nancy”.

This relatively low cost film cost $327,000 and came in $54 under budget, and was shot in 6 weeks in the summer of 1941.  Huston was given what he thought was the best advice you could give a young director.  Henry Blanke told him, “each scene, as you go to make it, is the best scene in the picture…the most important” (Luhr 118)  One scene, lasting seven minutes, was rehearsed for two days.  Sam Spade’s second encounter with Casper Gutman had a series of 22 precisely choreographed camera moves, all done in one shot.

“Everyone had a good time making the film.  Astor said, “And we had fun, zany lighthearted fun.  We were an unusually “close” company; players usually like to get away from each other at lunch time, but we would all go together across to the Lakeside Golf Club, where a big table was set on the patio for us.  The normally frowned on pre-luncheon drink was a must.  We often took an hour and a half, and still we stayed ahead of schedule” (Astor 212). Every night after shooting was complete, Astor, Huston, Bogart, Lorre and Ward Bond would return to the Lakeside Country Club, have some drinks, eat the buffet dinner and talk convivially until midnight” (Meyers/Bogart 126). The film established John Huston as a major director, and firmly set Humphrey Bogart on the path to stardom he’d finally cement with Casablanca (1943). 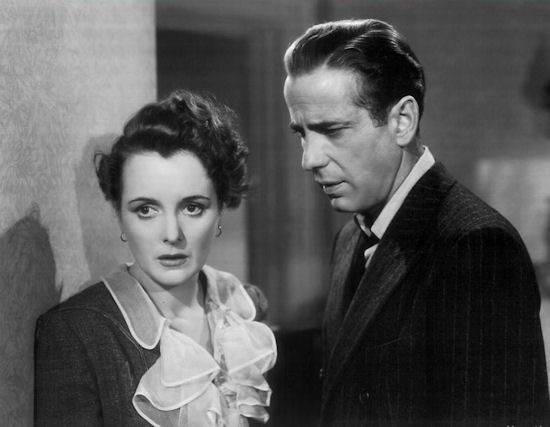 The Maltese Falcon is frequently described as the first film noir, even though it did not contain many of the hallmarks of the genre, no voice over narration, no flashbacks, no shadowy cinematography.  There is “a marked propensity for shooting at the ceiling, for framing tight compositions, and for looking at faces from slightly odd angles.  The camera jumps about the room, moving along with the characters and always making comments on the action by pointing up at a face of peering through a doorway.  It is this camera style together with Huston’s positioning of the actors, which creates overtly sinister effects and the feeling that we are viewing the scene through the eyes of some witty observer” (Luhr 157).

The hard boiled crime novel on which it was based contrasted sharply with the more genteel genre of British crime fiction, in which crime is seemingly an aberration in an otherwise orderly society.  Here, society itself is seen as corrupt, and even the hero is on the edge of these unsavory influences.  Shot before Pearl Harbor, when the US was strongly isolationist, the film also highlighted the foreign-ness of those searching for the Maltese Falcon, whose global journey reeked of the corruption of the un-American. The hints of unconventional sexuality provides an  “unsettling atmosphere; the viewer often feels poised at the borders of the forbidden without verification”. (Luhr 9).  Mary Astor’s femme fatale, Brigid O’ Shaughnessy, would become a staple of the genre, but in 1941, critics hardly knew what to do with a female character of such unpredictable sexuality and dubious morality.

Of Huston she said, “”John proved to be a wonderful director, with his dynamic personality and his keen insight into people.  You either loved him or hated him, but you worked hard for him, his enthusiasm affected everyone on the set like wine” (Astor 212).

The Maltese Falcon was nominated for Best Picture, Best Screenplay and Best Supporting Actor (Greenstreet) Oscars, but predictably, won none.

The props department made 6 plaster Maltese Falcons at a cost of $114.00 each. In 2013 a cast lead 45 lb 12 inch tall falcon sold for $4,085,000, $3,758,000 more than the film cost in 1941.  This falcon could be identified as having been used in the film by the dent resulting when it was dropped by actress Lee Patrick (as Effie Perine). It is among the most expensive movie memorabilia ever sold, cementing its place as one of the most important objects in cinema history.

The last line of the film “the stuff dreams are made of” was not in Hammett’s novel, and it had long been attributed to John Huston.  But, it likely was Bogart who suggested quoting Shakespeare’s words as the film’s epitaph. Since he also supplied “Here’s looking at you, kid” and “Of all the gin joints in the world, she walks into mine” from Casablanca, one can say he was a man who knew his way around not just a memorable character, but a memorable line, in this flawless, endlessly watchable film. 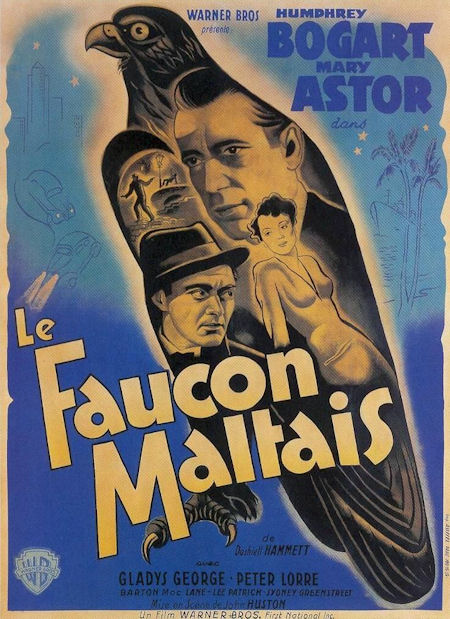 The Maltese Falcon: John Huston, Director edited by William Luhr, especially “The stuff that dreams are made of” by Rudy Behlmer,  Bogart: A Life in Hollywood by Jeffrey Meyers, My Story by Mary Astor, Village Voice Obit by Andrew Sarris October 13, 1987, The Lost One: A Life of Peter Lorre by Stephen D. Youngkin.