Three Manhattan couples, Isaac and Tracy, Yale and Mary, Isaac and Mary, search for the elusive, perfect balance of passion and intellect in love, and so doom each budding romance. Allen’s real affair is with New York City, and there is no more moving tribute than the 9 exquisite minutes that begin this film. “He has closed out the decade and pinned it down like a butterfly on a board.” (Lloyd Rose). “The only truly great American movie of the 1970s” (Andrew Sarris).

Of all the cities I’ve been to,” Allen has said, “I like New York the best. Because it’s exciting, active. What I feel about New York is hard to say in a few words. It’s really the rhythm of the city. You feel it the moment you walk down the street. There’s hundred of good restaurants, thousands of brilliant paintings, you can see all the old movies, all the new onesit has to do with nerves with the blood that runs through the city. It’s dangerous, noisy. It’s not peaceful or easy and because of it you feel more alive.” (Brode)

The breathtaking prologue, photographed by Gordon Willis and scored to the soaring strains of Gershwin, reflects the unchanging character of the city, even though the city and its inhabitants are in constant flux. Roger Ebert thinks this one of the best photographed movies ever made, the perfect argument for video letterboxing. But we are lucky to be seeing it in its glory on the big screen, thanks to an archival print from the NC School of the Arts. “It’s photographed so beautifully and romantically that it almost makes you forget all the dog poop in the streets,” Maureen Stapleton was overheard remarking at the premiere.

Allen wanted to communicate “my subjective romantic view of contemporary life in Manhattan. I like to think that one hundred years from now, if people see the picture, they will learn something about what life is like in the 1970s.” (Brode) “People are always telling me that they don’t know the New York I write about, that they don’t know that it really exsted. It may have only existed in the movies, I don’t know.” (Allen in Rolling Stone, in Bailey). 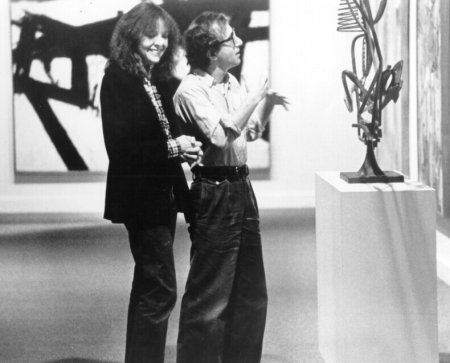 Allen made Manhattan just after his Oscar winning Annie Hall, and it was perceived as an elaboration on it. But, looking over the arc of Woody’s career, these two films are a transition point, as he begins to synthesize both the serious and comic sides of his nature. Annie Hall, with its jokiness and sight gags, seems firmly wedded to what Allen himself called ruefully in his next movie, the sourpuss Stardust Memories, “the early, funny films.” But, those early, funny films have not aged particularly well, (with the exception of Sleeper) and Manhattan, like Hannah and her Sisters and Crimes and Misdemeanors still seem at this point in time to be genuine classics. The film’s producer, Charles Joffre, had to apologize for it in 1979, forced to describe it as a drama with comedy, rather than a comedy with drama, to placate the (still) unsatisfied fans of the “old” Woody.

Allen’s character seeks a perfect love by dating a high school girl played with calm assurance by Mariel Hemingway. At the time, Woody himself was having a relationship with an extremely young woman just barely out of high school; his romance with Diane Keaton having ended before they ever made a film together. Tracy is a fantasy object–where are her parents? And, of course, it’s an inadvertent foreshadowing of Woody’s personal scandal. He definitely has a Lolita problem here; Isaac wants innocence corrupted to his own specifications. But, Tracy is also another part of the shiksa goddess cycle, a beautiful WASP dreamboat played icily by Meryl Streep, neurotically by Keaton (“Mary is an empty woman, a victim of Manhattan’s sophisticated decadence, a burnt-out Annie Hall,” Blake writes) and sweetly by Hemingway. “What man in his 40s but Woody Allen,” Pauline Kael asked, “could pass off a predilection for teen-agers as a quest for true values?”

But, as Roger Ebert said in his original review, “The relationships aren’t really the point of the movie. It’s more about what people say during relationships–or, to put it more bluntly, it’s about how people lie by technically telling the truth.” Richard Shickel wrote that he “has turned Manhattan, which is one of Allen’s passions, into a dream city, deliberately contrasting the awesome aspirations implicit in its construction with the distracted lives he sees taking place in it.”

Manhattan, along with its predecessor, Annie Hall, also represents the moment at which New Yorkers began to realize the value of the historic cityscape. “That, for all its troubles the city still possessed an urban character of unmatched power, well worth fighting for. But the film also left no doubt that the most precious parts of that urbanism–at least in Woody Allen’s eyes–were those of the past.” (Sanders). At a moment in time when a part of the New York skyline has been horribly changedeven by the tragic loss of buildings that few New Yorkers would have professed to treasure architecturally on September 10Allen’s paen to the city’s beauty seems particularly poignant. 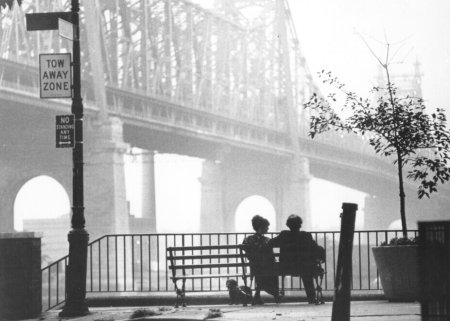 (Photos from the Museum of Modern Art. Sources include: Woody Allen: His films and career by Douglas Brode, Reluctant Film Art of Woody Allen, Peter J. Bailey, Perspectives on Woody Allen, edited by Renee Curry, particularly “A Visual Poem to NY City” by Colin Westerbrook, Jr., Woody Allen, Profane and Sacred by Richard A. Blake, Taking It all In by Pauline Kael, Roger Ebert’s reviews, in the 1991 Movie Home Companion, and on-line, in his Great Movies series, and my favorite movie book of last year, Celluloid Skyline by James Sanders: www.celluloidskyline.com.