Welcome to Comedy Archeology. These movies are influenced by vaudeville, and star vaudeville comics. In vaudeville, you viewed a cascade of singers, comedians, acrobats and animal acts in a random order. These films ricochet from place to place, but audiences were accustomed to these episodic presentations. They are also mysteriously topical. Filmed in a few weeks, and on the screen a couple of months later, they satirize current popular culture, so in a way watching them would be like trying to decode Jay Leno’s opening monologue in 70 years. For example, Horse Feathers and these two films all joke about the Jeanette MacDonald/Maurice Chevalier operetta One Hour With You. In Horse Feathers, the satire consists of various cast members taking their turns singing or playing “Everyone Says I Love You.” Diplomaniacs halts in the middle for a full blown parody (the highlight of the film, as far as I’m concerned). Million Dollar Legs goes so far as to actually sing “One Hour With You”, the lyrics replaced by “Woof bloogle jig” as the Klopstockian love song.

In Klopstockia, all the women are named Angela and all the men are named George, and every citizen is an Olympic caliber athlete. A free-association melee of Mack Sennett-style slapstick comedy (with Sennett comedians Andy Clyde and Ben Turpin) verbal mayhem and political satire, Million Dollar Legs is reported to feature actual footage of the 1932 Los Angeles Olympics. However, according to a more recent Wikipedia entry, the release date of the film is prior to the 1932 Olympics, so the footage must be of either some pre-Olympic trials or other sporting events. Lyda Roberti parodies Greta Garbo’s Mata Hari as Mata Machree, The Woman No Man Can Resist and proves it–“When I Get Hot in Klopstockia.” Roberti originated on Broadway the role in Roberta played by Ginger Rogers. I was baffled by Ginger’s silly accent in that film, until I realized she must have been directed to imitate Roberti’s famous stage performance. 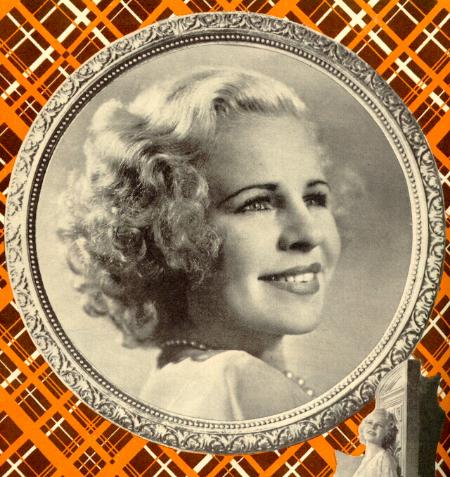 Platinum Pole: Peary discovered the North Pole and Amundsen found the South Pole, but Hollywood takes the credit for discovering the Platinum Pole–Lyda Roberti, whose first name looks like a typographical error on the word “Lady.” She sang a song called “Sveet und Hot” in a Broadway show and, right then, the movies wanted her to be “sveet und hot” for them, too. With her untamed platinum bob, her Polish accent, and her exotic sense of humor, she may steal “The Kid From Spain” from Eddie Cantor.

W.C. Fields was much more the author of his comic persona than either the Marxes or Wheeler and Woolsey. He, of course, had been a huge success as a juggler and comedian in the Ziegfield Follies and then in Poppy on Broadway, in the role of Professor Eustace McGargle, the antecedent of many of his film characters. Wary of thievery, he wrote down and copyrighted many of his comic sketches at the Library of Congress, and he performed (and refined) them on stage, in silent films, and later in the talkies. Million Dollar Legs belongs in an interim phase of his career. His great vaudeville and stage successes were behind him, and he had already done many of his great routines in comic shorts. But Paramount was a bit bewildered by Fields, casting him, for example, as Humpty Dumpty in an all-star Alice in Wonderland (one of my father’s most treasured childhood memories). The self-authored films in which he refined his muttering, martini-swilling grouch were still ahead. Top-billed Jack Oakie is energetic, if not really funny, and is overshadowed by fiesty Susan Fleming, who plays Fields daughter. She must have had an affinity for anarchic comedy, because she married Harpo Marx in 1936. 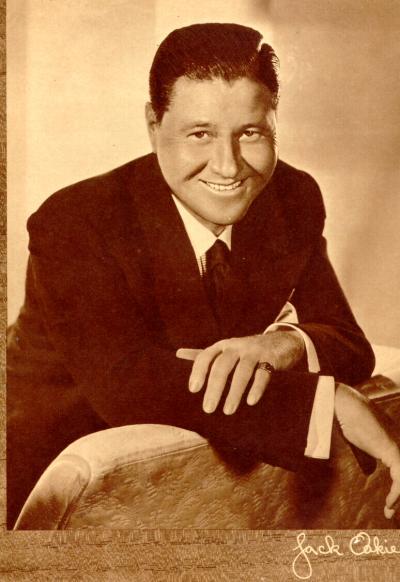 Diplomaniacs Warning: This nutty movie is in bad taste! Wheeler and Woolsey were hugely popular in the early thirties, for their vaudeville honed wisecracking, cockeyed musical numbers and risqué repartee. This satire of international diplomacy includes an Oxford educated Native American, a Yiddish-accented Chinese henchman, a homoerotic operetta parody, Fifi, whose smoking kisses are fatal, and an International Peace Conference staged as a minstrel show, for equal opportunity political incorrectness. Joseph L. Mankiewicz wrote the story for Million Dollar Legs and co-wrote the screenplay for Diplomaniacs 20 years before winning writing and directing Oscars for All About Eve.

Bert Wheeler (the one with the curly hair) and Robert Woolsey (the one with the glasses and cigar) both came up in vaudeville, but separately. Wheeler and his wife (as Bert and Betty Wheeler) played all over the country with their act, eventually ending in the top of the heap; the 1923 Ziegfield Follies, headlining Fannie Brice. On the road again in 1926, Betty left Bert for Clarence Stroud, who had an act with his twin brother, Claude. (Claude has a fleeting moment of fame a quarter of a century later he is the pianist in the party scene in All About Eve forced to play “Liebstraum” over and over for a drunken Bette Davis). So, Bert was without an act.

Robert Woolsey was a character comedian in a series of plays on and off (sometimes far off) Broadway. He supported W.C. Fields in his famous stage role in Poppy, and had the opportunity to study the master funnyman 8 times a week for over a year. Wheeler and Woolsey were both cast in Ziegfield’s lavish musical comedy Rio Rita. “When I was in Rio Rita, I met Bobby Woolsey for the first time. I met him as just another comedian in this show. He was a hard guy to get to know at first, but we got to be quite friendly. We never dreamed that we’d ever be partners. We were just two comedians hired for the show. That’s how we became a team.” The reviews for both the show and for the two comedians were ecstatic, and after a long run, they found themselves in Hollywood doing a movie version, with a huge budget, Technicolor sequences and Bebe Daniels, one of Hollywood’s biggest stars, in her first talkie. The technical problems of a complicated production in 1929 were enormous. The young costume designer, Walter Plunkett, remembered many of the hazards, and incorporated them into scenes in one of his later films, Singin’ in the Rain. If you see Rio Rita, you can’t help but think of Lina Lamont in that later film, as Bebe Daniels gestures lovingly towards the hero, and all you hear is the clank of her big bangle bracelets. 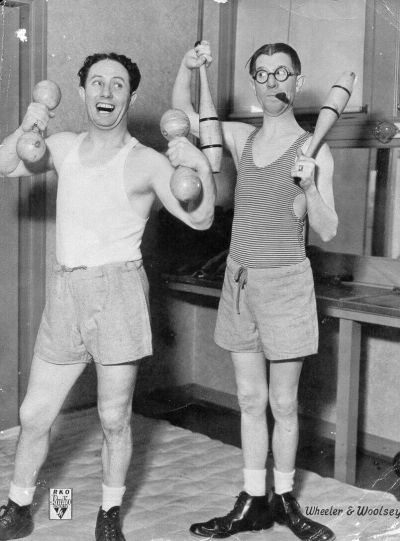 Diplomaniacs was written specifically as a follow-up to Million Dollar Legs by the same writing team. It’s part of a small group of political satires, most famously Duck Soup, that flourished in the early 1930s during the controversial advent of Roosevelt’s New Deal. The film showcases Wheeler and Woolsey at the peak of their career, when Woolsey’s “whooah!” was a national catchphrase. Contemporary critics ignored the satirical content, and judged it on humor value alone. The performers may have been unaware of the writers’ slant, as well. Groucho Marx commented on Duck Soup saying, “We were trying to be funny, but we didn’t know we were satirizing current conditions. It came as a great surprise to us.” Some of W & W’s routines came straight from vaudeville, like the seemingly interminable barber sketch that opens the picture, and Wheeler’s simultaneously eating, crying and singing routine, his specialty in the Ziegfield Follies of 1923. (One of my audience members appreciated having this pointed out, since she could not figure out what he was doing).

There is a minstrel show near the end of this picture. Minstrel shows were an incredibly popular form of entertainment in this country for a long time, and our changed attitudes towards this racist form of entertainment make these sequences difficult to watch today. There is no longer anything remotely amusing about them. Casual racism (in the form of stereotypes demeaning many national and religious groups) was as integral to early Hollywood comedy as body function humor is in current films. When I used to watch old movies with my young daughter, every time Judy Garland or Fred Astaire would “black up” I always groaned, “Oh, no!” She finally asked me, “Why do you always do that?” As a public-school kid, growing up in a much less racist society, she does not equate blackface with real African-American people, but as just another silly costume. So, if some of the humor in this film makes you cringe (and rightly so) I think the best you can do is put it in its time period and consign it to the dustbin of history (and pray that the current affection for flatulence jokes will soon follow.) 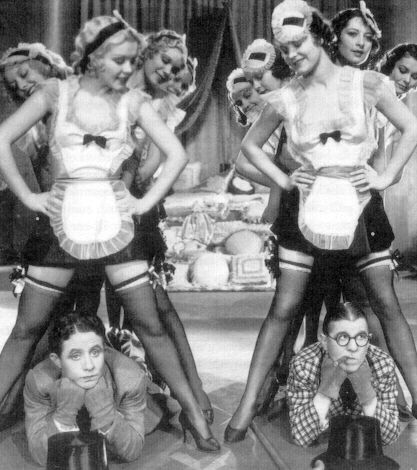 Seeing these two films one after another, interesting parallels come to the fore. Each film has a “irresistible” vamp who is a femme fatale to all but the lead comedian. Each is doubled by an appealing tomboyish heroine. Material is clearly recycled from the first film into the second, although setting Million Dollar Legs in the mythical kingdom of Klopstockia (like Duck Soup‘s Fredonia) exempts it from the disparaging remarks directed against virtually every ethnic/racial minority in Diplomaniacs. Which film is funnier? Million Dollar Legs is the funnier idea, but wastes W.C. Fields and spends far too much time on Jack Oakie. The film should have starred Andy Clyde and Lyda Roberti. I have a sad weakness for Wheeler and Woolsey, but their movies always have slow spots, and the ethnic humor leaves a sour taste these days. Louis Calhern does a splendid parody of his straight villains (and bravely belts “Annie Laurie”). And, as I said, I love the “On the Boulevard” song, illustrated above.

Wheeler and Woolsey made 24 films between 1930-37, when Woolsey died at the relatively young age of 49. They were considered to be “dirty” comedians, and when the Production Code was enforced in 1934, they lost a lot of leeway with their material. Although they are currently undergoing a small rediscovery, Richard Barrios in his superb book, A Song in the Dark says, “Wheeler and Woolsey are a taste that many audiences may not wish to acquire.” See what you think.

(Jack Oakie photo from anonymous movie star scrapbook, c. 1940. Wheeler and Woolsey publicity photo must have been an advertising giveaway, part of a set of stars from different studios acquired by Claire Drazin in mid-1930s. Photo from Diplomaniacs from Wisconsin Center for Film and Theater Research. Lyda Roberti from the December, 1932 Motion Picture.).