A chimp inadvertently mixes a “fountain-of-youth” formula, and comic confusion results as a staid married couple devolve to teendom, childhood and then savagery. Monkey Business is one of the more bizarre cinematic responses to the repressive 1950s, when lack of self-control was the ultimate sin. Sober maturity was a highly prized trait in the mid-century movie world. Adults were adults (and looked it) and children were children. Monkey Business tosses expectations of age-related behavior aside.

The script’s original title, The Fountain of Youth was first changed to Darling, I am Growing Younger and then Monkey Business (also the name of an early Marx Brothers film that had nothing to do with monkeys). I.A.L. Diamond, soon to become Billy Wilder’s collaborator, did the first rewrite on the original story and he was assisted by old Hollywood hands Ben Hecht and Charles Lederer. Hawks wanted to cast a young actress opposite 48 year old Grant, to show that Dr. Barnaby Fulton had “turned into a sort of a fogey; then he was rejuvenated and remained younger for the rest of his life. That was the point.” But, to his credit, Grant resisted being cast opposite a much younger actress. Hawks was in his 50s and was dating (and would soon marry) a woman half his age. He took the line “You’re only old when you forget you’re young” as personal gospel. At 41, Ginger Rogers was the oldest leading lady Hawks ever had in one of his films, and he was mightily displeased at being unable to cast a younger actress (he had Ava Gardner in mind). He treated Rogers impolitely on the set, addressing her formally as “Virginia” her real name. 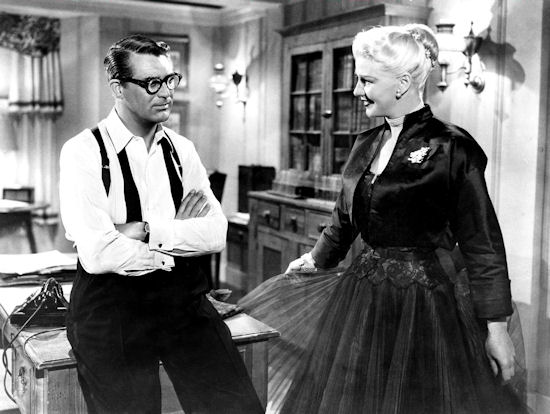 Howard Hawks only made seven comedies during his long and celebrated career. He was never under a long term contract to a particular studio, and his independence allowed him to make a variety of genre films, strongly influenced by his personality. This film is in many ways a mirror image of Hawks 1936 comedy, Bringing Up Baby. In the earlier film, Grant played a paleontologist whose life is turned upside down by a madcap heiress. Gerald Mast summarized the earlier film as “youth misses life” and the second as “life misses youth.” Grant’s movements are slow in this film (to contrast his regained vigor) his glasses are much thicker than in Bringing Up Baby and he seems to have aged dreadfully, at least until his first taste of B-4. The memory of Grant in his chunky glasses surely must have inspired Tony’s Curtis’ imitation of him in Some Like It Hot.

In the original script, only Grant was going to take the drug, but Rogers insisted she wanted to do it. Hawks complained that her demand to be part of the fun ruined his concept, “She wanted to do it and I had to let her do it. I thought it was lousy and it made her play badly throughout the whole picture.” And, she does not just become a carefree girl.  She is compelled to relive her wedding night, in all its fear and anxiety.  His sexist grousing seems extremely small minded, since she is quite funny. But, Hawks did allow to use her star persona in her dancing sequences and show off a remarkable trick in which she balances a glass of water on her head.

The Breen Office, in charge of film censorship, objected vehemently to the film’s entire premise. The plot indicated explicitly that the formula B-4, first named Cupidone, was primarily an aphrodisiac. Originally, Edwina’s primary interest in the drug was her hope of rekindling her husband’s amorous interests in her, and Mr. Oxley’s to aid his infatuation with the luscious Miss Laurel. Even so, there were a surprising number of racy remarks that evaded the unimaginative censors, double entendres evident only when spoken by a skilled comedian like Cary Grant.

Grant enjoyed working with the baby chimp much more than he had working with the leopard in Bringing Up Baby. Chimps were popular co-stars in the early 50s. J. Fred Muggs cavorted with David Garroway on the Today show, and Jerry Lewis as well as Ronald Reagan played second banana to primate performers in the movies.   The chimp is unbilled, but called Esther in the film.  “The moments in which a highly trained chimp is alone on screen, handling the test-tubes with quite as much dexterity as any actor, are at once disorientating and weirdly scary: here it is, a chimpanzee, doing exactly as well as any actor. An amazing kind of Darwinian level playing field between apes and humans is established by the screwball genre” (The Guardian).  Actors don’t co-star with chimps any more, as we are reluctant to treat a creature we know as so close to human (remember, this is more than a decade before Jane Goodall) as a comic prop. 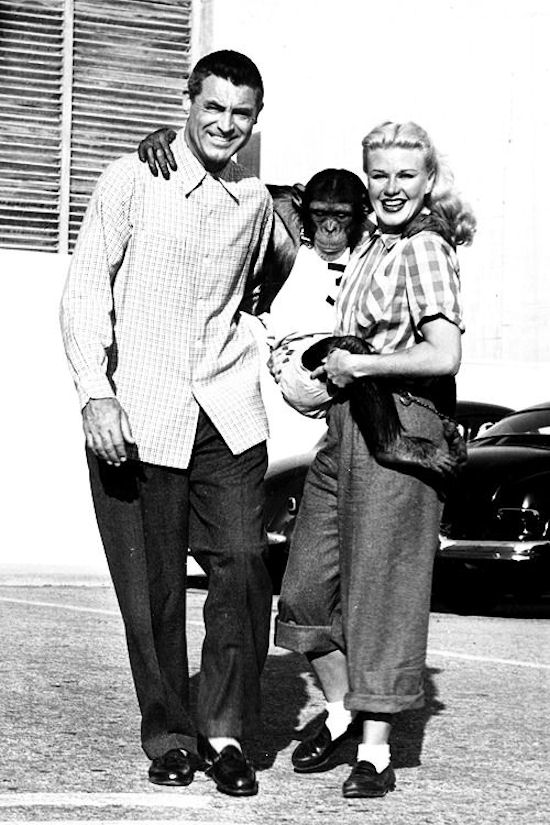 Forced smiles all around?

One of the supporting human actors, Robert Cornwaithe said, “Cary Grant contributed a lot to his part. He had a remarkable memory of the games he had played as a kid, which he used for his character, and he brought a wonderful childlike quality to it.” (McCarthy). One of the film’s highlights is Grant leading a group of little backyard cowboys and  Indians in a War Dance. If this seems a bit politically incorrect now, remember that Westerns were extremely popular both in movies and on tv, and many Baby Boomer proudly wore cowboy/girl or Indian costumes for playtime.

Six year old George “Foghorn” Winslow’s deep voice renders him a caricature of an adult, with an adult’s literal-mindedness. He’s contrasted with Marilyn Monroe, a grown woman with a little baby voice, who is seen as half-child, although as Rogers says tartly, “not the part that’s visible.” Winslow was discovered on Art Linkletter’s “People Are Funny” radio show, I’m assuming that, like on tv, he had a segment called, Kids Say the Darndest Things.  Cary Grant heard Winslow (actually George Wentzlaff) on the air, and suggested his casting in Room for One More, and then in this film. Winslow retired from show business at the age of 12, enlisted in the Navy during the Viet Nam War and worked until retirement at the Post Office. He never married and shared his home with numerous rescue cats. 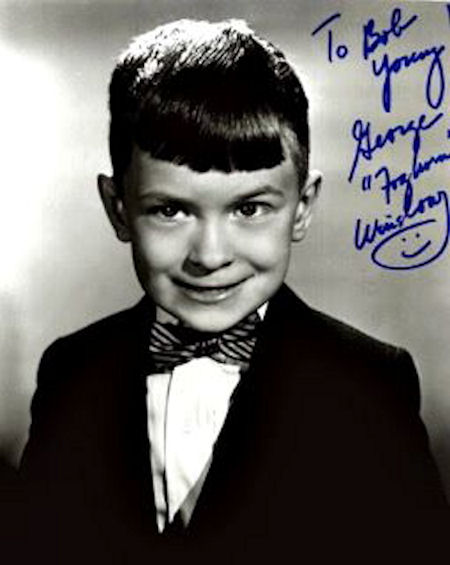 Monkey Business was one of Marilyn’s pre-stardom films, but it was her 17th, so she was hardly a newcomer. Hawks saw Marilyn not as a femme fatale, but as a comic seductress, which he would exploit to great effect in her next film, Gentlemen Prefer Blondes. Marilyn understood very well how to use her body for maximum effect. Only twice in her career did she wear a full skirt in a film. In Monkey Business, she needed one to display her experimental stockings to Grant and to roller skate, and in The Seven Year Itch, her dress had to flutter in the breeze of a subway grate. The tan wool jersey dress Travilla designed for her in this film was the only costume he ever made for her that she hated because it did not reveal enough of her figure, but she was not yet a big enough start to demand a change. Marilyn garnered a great deal of publicity during filming, but Grant was never threatened by the attention given to younger stars. 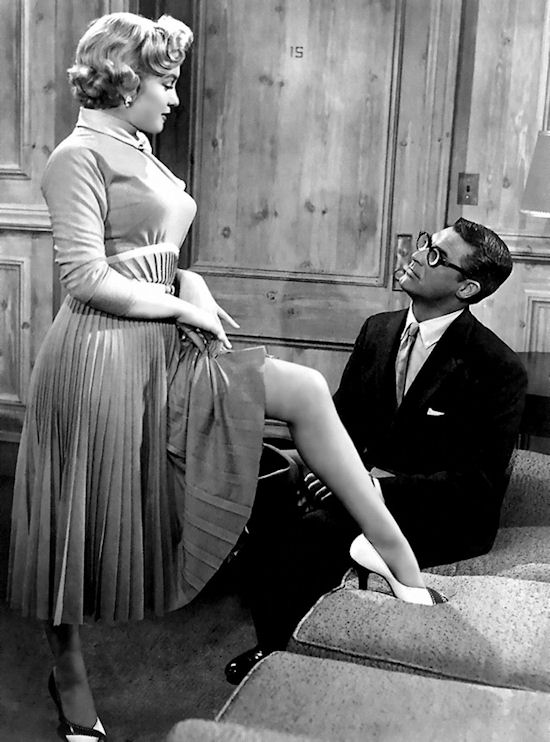 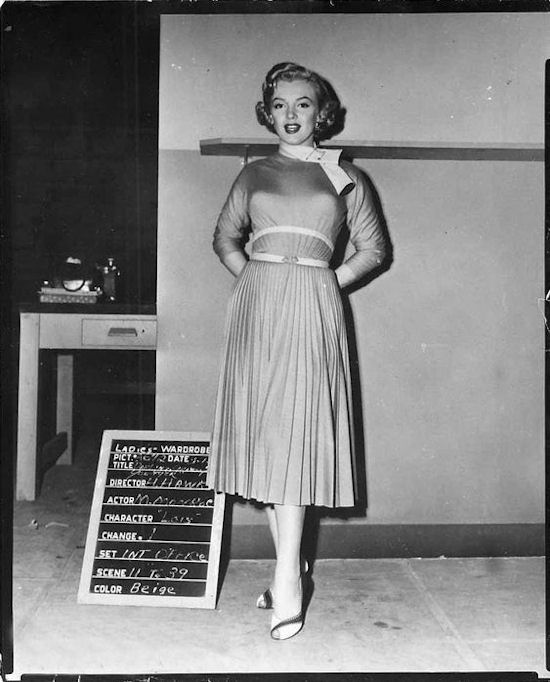 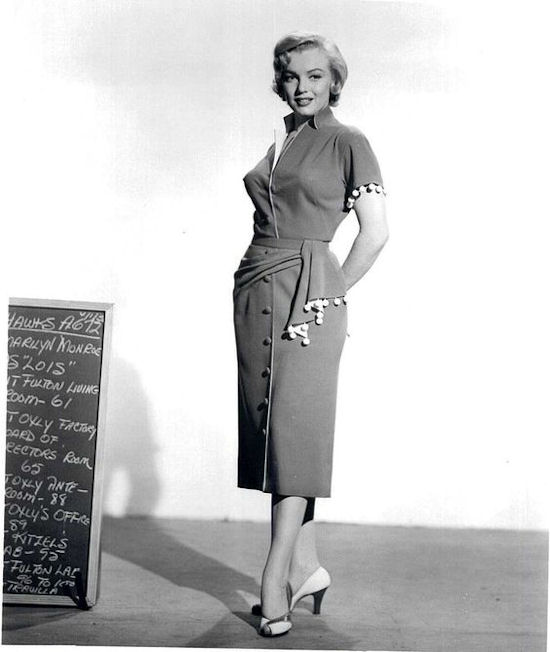 I love wardrobe check photos! Here you see Monroe in the dress she hated, and one she did not. Ball fringe has nice movement to it.

“Not yet, Cary,” director Howard Hawks’ voice cautions, before the credits even roll. Two cage doors are opened, both Esther the chimpanzee’s as well as the door of Dr. Barnaby Fulton’s suburban tract house, welcoming not just youth, but reckless youth. “Monkey Business takes the solid familiar images of well-known stars and progressively strips them of their respectability by exposing not only the underpinnings of their screen personas but also the foundations of the limited and marriage-centered world of their era.” (Sikov).Grant was a romantic leading man who wore his status lightly, never afraid to mock the conventions.

Hawks delighted in dressing Grant in women’s clothes for subversive comic effect.  He did it at least three times, it must have been a subversive acknowledgement of Grant’s bisexuality.  Clothing is one of the signs of liberation, as Edwina sheds her stiff rustling gown for a sloppy shirt and pants, and Barnaby gets a brush cut and a plaid sport coat. The appearance of being an adult is part of the illusion of maturity, which B-4 removes, promoting silly behavior as psychotherapy. Stability and dullness, rather than contribute to the longevity of a marriage the film argues, can destroy it. An established couple needs to remember what it was like B-4.

“It is part romp, part druggie-surrealist masterpiece, and a complete joy. Monkey Business is undervalued by some, on account of its alleged inferiority to the master’s 30s pictures, and the accident of sharing a title with a film by the Marx Brothers. I can only say that this film whizzes joyfully along with touches of pure genius: at once sublimely innocent and entirely worldly” (The Guardian). 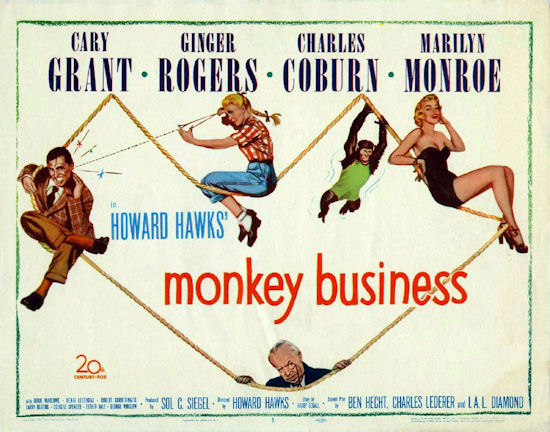 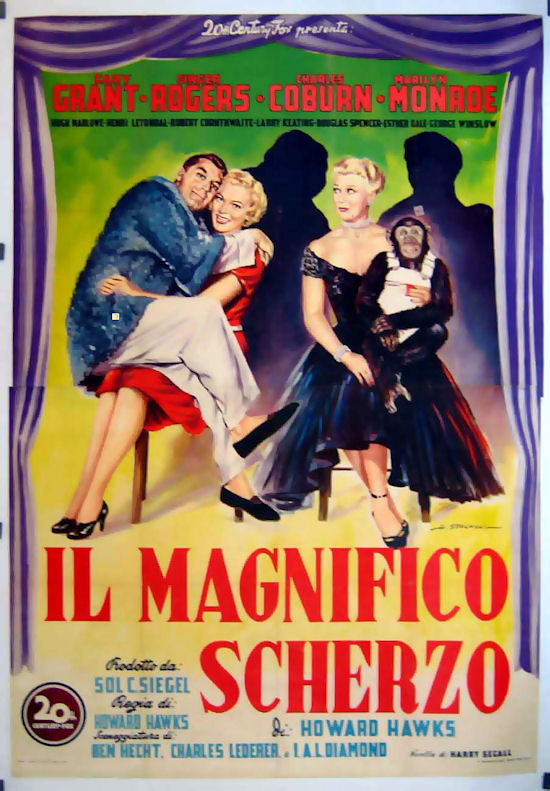