Paddy Chayefsky’s satire of television news has become self-fulfilling prophecy and newscaster Howard Beale’s lament, “I’m not going to take it anymore” has entered the lexicon. “Two decades later, this iconic American New Wave renegade text is even more startling than it once was—was Hollywood ever this cerebral, this caustic, this ethically apocalyptic?”—Village Voice.

In the early 1970s, TV Sarasota Florida talk show host Chris Chubbock announced during her morning program, “In keeping with Channel 40’s policy of bringing you the latest in blood and guts and in living color, you are about to see another first, attempted suicide.” She reached into a shopping bag, pulled out a gun and shot herself in the head on camera. Playwright Paddy Chayefsky began writing the screenplay for Network that month. As background information, he asked respected NBC news anchor John Chancellor if it was possible that a newsman might go mad on national tv, and he said, “Every day” (Erlich).

Director Sidney Lumet and screenwriter Paddy Chayefsky met and became friends in their early television days. Chayefsy became famous for his play, Marty, which was brought to the screen and won the 1955 Oscar for Best Picture. Lumet was famous for his direction of another tv to movie transplant, the jury room drama, Twelve Angry Men (1957). They were about the same age, Jewish, had served in WWII and then survived the blacklist, and their politics were similar. They knew tv from the inside out.

Both knew that since the early 1970s, local television stations had hired show doctors, consultants who could help them juice up the ratings for local news shows. But simply to satirize tv as FCC Commissioner Newton Minow’s “vast wasteland” was too easy, and television, since its initial popularity, has reflected American culture as a whole, Lumet said, “To me and Paddy, it wasn’t satire at all, it was sheer reportage. Everything you saw in Network had happened to either Paddy or myself—except for the shooting of Howard Beale.” (Good). But, like other critics of tv, they were ahead of their time. Film critic Richard Schickel, who still writes for Time magazine, found the whole thing impossible to accept in 1976. TV journalist Barbara Walters asserted the show biz approach to the news could never happen, but like every dire prediction on the fate of television, it ultimately came true. Voyeuristic infotainment controlled by corporate America, exploiting and destroying for profit, could well describe the current state of television journalism.

The narrowing distance between what was news and what was entertainment was a hot topic in the late 70s, before Fox News, MSNBC and CNN, and when the three major networks were still the sole authoritative sources. Chayefsky had been interested in media manipulation since he wrote The Americanization of Emily, in which the military makes a film to promote wartime heroism. The Hospital was Chayefsky’s first foray into overt social comment, also a film with a man’s midlife crisis and a younger woman, a suicide and prophetic visions, and an institution representing society’s rot. Network was set in the world of television he knew so well. Chayefsky said of tv news, “It totally desensitizes us to viciousness, brutality, murder death so we no longer actively feel the pains of the victim or suffer for their lives or feel for their grief. We’ve lost our sense of shock, our sense of humanity.” (Erlich).

As is still the case, in Good Night and Good Luck, the broadcast journalism of Edward R. Murrow is invoked as a model of honesty and authority, and is represented in Network by William Holden’s character. Murrow’s integrity was unquestioned, although he also did fluffy interview pieces along with his tougher investigations. The clash between the sideshow atmosphere and a nostalgia for the Murrow era informs Network. Director Sidney Lumet said of Chayefsky, “His cynicism was partly a pose, but a healthy dose of paranoia was also in his character…Finch’s tirades were aimed at jolting viewers out of tube-induced stupor.”(Erlich).

Director Sidney Lumet began his acting career in the Yiddish theater in NYC, and made his Broadway debut in the play Dead End. His acting career interrupted by WWII, he began directing at CBS tv in 1950. In the 1970s, he also directed Dog Day Afternoon and Serpico, both with Al Pacino. He’s still directing, and has recently returned to do some tv work. Although Lumet had always been praised for the realism of his films, in Network, he wanted to go to the other extreme, in part to address those critics that thought his films lacked the auteur’s strong hand. During the film, the controlled lighting of the interiors continually supplanted the natural lighting of the exterior scenes, until the entire film has become the gentle mid-tones of the most acceptable broadcast hues, as if reality doesn’t exist unless it is composed and lit for the tv camera. Network was a thoroughgoing collaboration between Lumet and Chayefsky. They were together for rehearsals and shooting, and looked at the rushes. Invited into the editing room, Chayefsky declined, knowing his script was in good hands.

Peter Finch, who plays anchorman Howard Beale, had acted mostly in Britain, on stage and in films. He’d had a chaotic life. An illegitimate child of an unconventional mother, he was shuttled from relative to relative, spending some of his childhood in India, and then in Australia. He drank, smoked, caroused and didn’t care about much of anything, including his career. His most notable parts as far as American audiences were concerned had been opposite Julie Christie in Far From the Madding Crowd, and as a married man having a homosexual love affair in Sunday Bloody Sunday. Finch hadn’t made a movie in a couple of years when Network was offered, he’d retired with his third wife to a banana plantation in Jamaica. He was the fourth choice for this part, after George C. Scott, Glenn Ford and Henry Fonda, all of whom turned it down. Chayefsky wanted to cast Finch, and told him he would have to pay his own fare to New York for the audition. He had to convince them he could do the accent. He laughed and said, “Bugger pride. Put the script in the mail.” As soon as he read the script, he was terrified someone else would take the part, sensing it was the role of a lifetime. 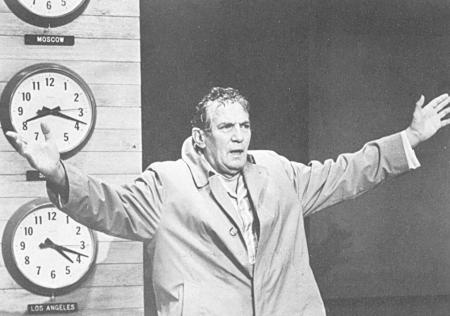 Chayefsky based Howard Beale on John Chancellor, NBC anchorman, who along with Howard K. Smith at ABC and Walter Cronkite at CBS were the networks’ voices of authority. Chayefsky was a friend of Chancellor’s and asked if he could bring Finch into the newsroom to see how the broadcast was assembled. Chancellor had him sit in the anchor’s seat and read the teleprompter, and was convinced, “He was not only a magnificent actor, but I thought he had the qualities of presentation which would have made an ideal choice for our business.” (Faulkner). Howard Beale would be Finch’s second to last acting role. After playing Yitzak Rabin in Raid on Entebbe, also in 1976, he died of a heart attack. Finch promoted Network tirelessly, convinced it was the performance for which he would be remembered. He appeared on Johnny Carson’s tv talk show to plug the film the night before he died. He was right, of course: anchorman Howard Beale is his most famous role.

Network also exploits a backlash on the second wave of feminism, where fear of women’s power is vented on the character played by Faye Dunaway. Reports of her Oscar victory felt it important to note that her performance was notorious for the amount of profane dialogue spoken by a female character. Like Frank Capra’s Meet John Doe, a female is the vessel of corruption of the press. Like in Broadcast News, journalistic integrity literally goes to bed with exploitation. 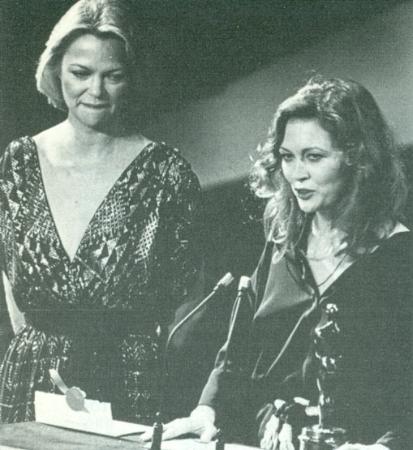 Network was a big prizewinner in its year. Shut out of Oscar’s Best Picture and Director wins (it was Rocky’s year, as well as All the President’s Men) it did win Oscars for Faye Dunaway and Peter Finch. William Holden was also nominated for the same film. Pundits predicted a split, resulting in a win for Taxi Driver’s Robert de Niro. (As a sidebar, a 5th nominee was Giancarlo Giannini for Seven Beauties, once one of world cinema’s leading actors, he is almost unrecognizable supporting Daniel Craig in the new Casino Royale). Beatrice Straight won for Supporting Actress (she played William Holden’s wife) and Chayefsky’s original script, also won an Oscar.

Finch died 12 days before the Oscar ceremony. Arrangements were made for Chayefsky to accept Finch’s Oscar should he win, rather than Finch’s widow, Caribbean born Eletha Finch. The party line was that they wanted someone important to accept the first posthumous acting award. But, it seems likely that, thirty years ago, Oscar shunned the potential controversy of the revelation of Finch’s interracial marriage. Instead, Paddy Chayefsky wrote and rehearsed a speech with Eletha, and she knew she was being called to the stage. She was greeted by a standing ovation, and her graceful acceptance was deemed the ceremony’s high point. 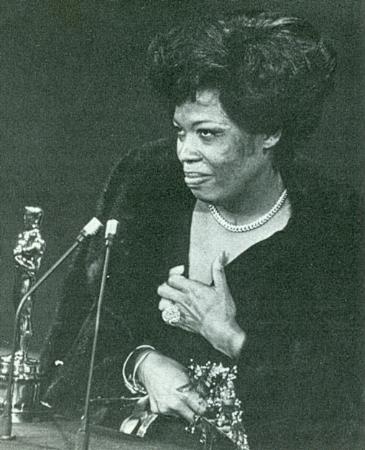 Although made 30 years ago, Network is still a stinging indictment of the tv business. In a day when wars have their own theme songs and logos, and the trusted face of national news is the inoffensive smile of Katie Couric, nothing forecast in Network seems remotely far fetched anymore. Although celebrated for its award winning acting by Finch, Dunaway, Holden and Beatrice Straight, the film is a true ensemble piece, with juicy supporting roles played by Robert Duvall, Ned Beatty and Marlene Warfield as a black power revolutionary who swiftly adapts to The Man’s game. Although Rated R for language and a brief sex scene in which tv ratings are discussed throughout, it’s not too late to make young people—reared on and never weaned from—the box: mad as hell.