The films that the Marx Brothers, Groucho, Chico, Harpo and Zeppo, made at Paramount Studios in the early thirties were iconoclastic, rag-bag works that incorporated their free-wheeling vaudeville sensibility into the new discipline of the talkies. Although these films are now recognized as comic masterpieces, they made progressively less money, and their last Paramount film, Duck Soup was considered a flop, even though it was Paramount’s 5th highest grossing film of the year. The Marxes wanted to try something new, and Paramount was, as Simon Louvish says, “Marxed out.” Since neither side wanted to discuss a new contract, they signed with a different studio, MGM. This decision was based less on business than Chico’s assertion was that MGM producer Irving Thalberg was such an excellent bridge player, he would certainly know just what to do with the Marx Brothers’ career. Thalberg’s solution was to tone down their relentless aggressiveness, adding a romantic subplot and conventional musical production numbers, hoping to create a wider audience by relegating the Marxes to comic relief in their own film.

The Marx Brothers grew up in the rough and tumble world common to immigrant children in turn of the century New York City. Groucho was the middle of five boys, and the only one with an interest in being in show business, perhaps because he never got the attention of either the older sons (Chico and Harpo) or the younger (Gummo and Zeppo). And, just as Charlie Chaplin credited his mother’s talent for pantomime and mimicry for his skill, and W.C. Fields’ mother was adept at the muttered aside, Minnie Marx was a champion of the comic put down, for which her son Groucho would become famous.

The five Marx Brothers worked their hard way up in vaudeville until they wowed Broadway in the late 1920s, in The Cocoanuts and Animal Crackers, nominally written by George S. Kaufman and Morrie Ryskind. But the brothers ad-libbed constantly and every performance was different. There is a famous story of Kaufman halting a conversation in the wings of the theater saying, “Wait a minute, I think I just heard one of my lines.” The filmed versions of these plays starring four Marx Brothers (minus Gummo) were shot during the day at the Astoria studios in Queens, New York, while they were still performing on the Broadway stage at night. The Marx Brothers came to Hollywood partly to break this cycle of overwork; the three elder Marxes were all over 40 and had over 20 years in show business apiece.

At Paramount, they had the benefit of a team of accomplished writers of social satire. The early Marx Brothers films were relentless in their deflation of pomposity and respected institutions, like their attack on college life in Horse Feathers, and they were rediscovered and beloved for this reason by the 1960s counter-culture, who recognized kindred souls. This was one quality Thalberg wished to tone down in their MGM outings. Another major change was to soften Harpo’s character from that of a rampaging satyr, who assaulted all and sundry physically by invading their personal space and grabbing and touching inappropriately, to a more child-like and innocent character, a change also in keeping with the instigation of the censorious Production Code in mid-1934 which sought to strip all films of what was considered to be questionable content.

The earlier films had been intentionally haphazard. “The Marxes Paramount writers and producer not only enjoyed ripping polite social institutions and assumptions to shreds, they also enjoyed destroying the very conventions of their craft and the aesthetics of the employers, creating films with deliberately irrelevant plot twists, incongruous sight gags, inconclusive conclusions, red herrings, faceless and forgettable supporting players…human behavior that is absurdly contrived, incredible and functionless” (Mast). The Marxes are impulsive in the extreme, and use language as a weapon, either as an insult, as deliberate misunderstanding, Chico’s “Italian” immigrant’s confusion about English (now politically incorrect) and, in Harpo’s case, an ability to pun, even in pantomime. The MGM films, beginning with A Night at the Opera, deliberately imposed order on this chaos.

Irving Thalberg was the engineer of this change. At the age of 19 he was appointed to run his Uncle Carl Laemmle’s Universal Studios, and by the mid 1920s he was at MGM, where he supervised many of the classic MGM films of the late silent and early talkie era. He was admired for his creative hand and his lavish productions by some, and reviled by others for his part in such acts as recutting Erich von Stroheim’s masterpiece, Greed, and stripping creative control from comic Buster Keaton. But, for many, he was the “boy wonder” immortalized in the F. Scott Fitzgerald works “Crazy Sundays” and The Last Tycoon, a creative producer who never took an onscreen credit (“credit you give yourself isn’t worth having”) but whose hand shaped the films and careers of many great stars, including his wife, Norma Shearer. Thalberg’s health had always been frail, and he died of a heart attack in 1936 at the age of 37.

The Marx Brothers were not intimidated by Thalberg’s power or his ability to make or break their film career. A famous Hollywood story recounts how, kept waiting too long for a meeting (Thalberg was notoriously late) he discovered the Brothers in his office, naked, roasting potatoes in the office fireplace. Thalberg sent out to the commissary for butter, and promised never to be late again.

The script for A Night at the Opera had numerous authors; it was a dense patchwork of scripts, sketches, plots and revisions. Two of their Paramount writers were retained, playwright George S. Kaufman and Morrie Ryskind. But, it’s difficult to assign credit for the famous set pieces from A Night at the Opera, the stateroom scene and “the party of the first part” dialogue, so complex was the evolution of the carefully crafted comedy. Zeppo had departed as a performing Marx bother, and a romantic lead was needed to replace him. This role was filled by Allan Jones, an operatic tenor. The ingénue was played by Kitty Carlisle, 21 years old, who had sung in a couple of Broadway shows. She later retired from the screen after marrying playwright Moss Hart.

Thalberg insisted that the Marxes take sections of A Night at the Opera on the road, to test its laugh-worthiness in front of a live audience. MGM files contain records of many different scenes and sketches that were so tested, until the writers felt that the material was tight enough to consign to celluloid. A studio contract director, Sam Wood, was assigned to the film. He was not a comedy expert, and would go on to direct a number of serious Hollywood classics in the 40s, Pride of the Yankees, For Whom the Bell Tolls and King’s Row. How much he actually contributed to the final product, and how much shows Thalberg’s firm hand will never be known. After the film was completed, it was previewed in front of an audience, so needed retakes and re-editing could be done, the comic timing adjusted and the script tightened until it was deemed ready for release, a practice that Thalberg devised and instituted at MGM.

In “Harpo Speaks” Harpo Marx spoke in some detail about the process of changing studios and the films that they made in both sections of their careers. He felt that they “were making a pleasant amount of loot” at Paramount, but that creatively they were standing still. Thalberg told the Marx Brothers they belonged in “A” picture with big budgets and believable plots. “Don’t worry about a thing,” he told them, “you get me the laughs and I’ll get you the story.” After the Marxes took the script on the road “We came back to LA with the show in tip-top shape, all shook down, tried out, tested and proven.” But the hard work was only beginning. Director Sam Wood “was a perfectionist, as everyone under Thalberg had to be. He’d shoot a scene 20 times, from twenty different angles, before he’d go on to the next one. And every time he was ready to shoot, whether it was Take One or Take Nineteen, he’d give us the same instructions: ‘Okay boys—go in there and sell ‘em a load of clams.’”

Thalberg succeeded in domesticating the Marx Brothers’ anarchy. Indeed, this was their most successful film, and it remains a favorite among their fans, even if their subsequent MGM films began a creative decline that would not be reversed. The Brothers, for all their brash modernity, played comedic archetypes, with Harpo as the Fool, and Groucho and Chico as Rogue and Trickster (with varying degrees of malice) and did so well into the 1950s. Their gleeful comedies focus on torment of the snobbish and self-important, where “stupidity is a fault so grave, it should be treated as a crime” (Nelson). 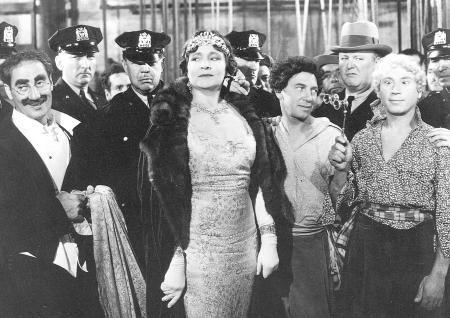 (Photo from Neil Sinyard, Classic Movie Comedians. Sources include: Sinyard, Monkey Business by Simon Louvish, The Comic Mind by Gerald Mast, Harpo Speaks by Harpo Marx, Comedy: An Introduction to Comedy in Literature, Drama and Cinema by T.G.A. Nelson, Why A Duck? by Richard J. Anobile).