Charlotte, browbeaten by her harpy mother, discovers therapy, a glamorous Orry Kelly wardrobe and thrilling shipboard romance.  Davis makes the tears flow and learns to live her own life, like the Greatest Generation’s version of Eat Pray Love. “In many ways, it’s the definitive women’s film of all time, with a deeply touching performance by Bette Davis” (Janine Basinger). UNCSA Film Archive print.

This is a series about costume, and Now Voyager represents a very important fashion moment for me.  When I saw Bette Davis standing shipboard in a picture hat and impeccably tailored Orry Kelly suit, I decided that if I had to choose one wardrobe, from one movie, to wear for eternity, this would be it. 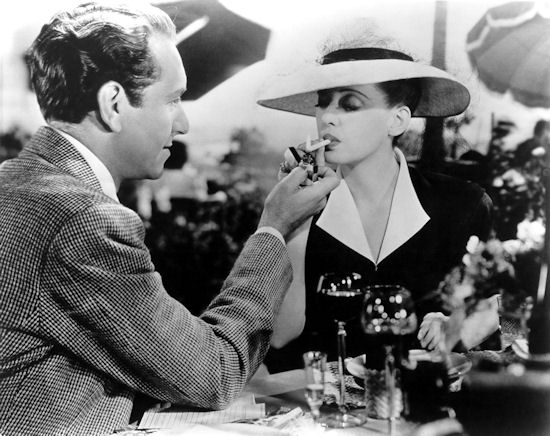 A woman’s picture, of which this is a quintessential example, says that the things women care about, matter.  The really is no similar present day cinematic genre and no modern day equivalent to a star like Bette Davis, Katherine Hepburn or Joan Crawford. They were studio money makers who had films tailored to their talents, aimed at predominantly female audiences. Now, Voyager (which is titled from a line from Walt Whitman, “Untold want, by life nor land ne’er granted, now, voyager, sail thou forth to seek and find…”) was based on a novel by Olive Higgins Prouty (Stella Dallas) the third of her books about the fictional Vale family of Boston.  Casey Robinson adapted his screenplay closely from the book, incorporating large swaths of Prouty’s dialogue.

Prouty was a graduate of Smith College, who delayed marriage until she had gained some experience as a writer.  Married into a wealthy family, she felt guilty about pursuing her professional career at the expense of her family life, and, after the death of one of her children, had a nervous breakdown.  She spent some time at a retreat, not unlike the one in Now, Voyager, where her therapist suggested that her family allow her to write professionally, in an office dedicated to her art.  Her therapist’s advice smoothed over some of the conflicts between her family and her professional life.  She wrote many of her personal frustrations into the character of Charlotte Vale, and for her, mental collapse was a gateway to reinvention.  In fact, in the novel, Jerry Durrance has also suffered a breakdown, making him the perfect, understanding partner. The book was published on October 8, 1941, and was optioned by Warner Brothers almost immediately, in part because of the popularity and longevity of Stella Dallas, a classic portrait of a self-sacrificing mother.

This film, a romance, is also about a central concern in many women’s lives, parenting.  Charlotte Vale’s selfish gorgon of a mother is manipulative and cruel, and Charlotte turns to a benevolent father figure, a therapist, to heal the poor parenting she has received.  Her transformation includes a new hairdo, shaped eyebrows, a manicure and dazzling ensembles, but it also gives her an opportunity, not just for love on her own terms, but to provide parenting to a forlorn girl, with whom she deeply sympathizes. She heals herself by providing the nurture she never had at home. 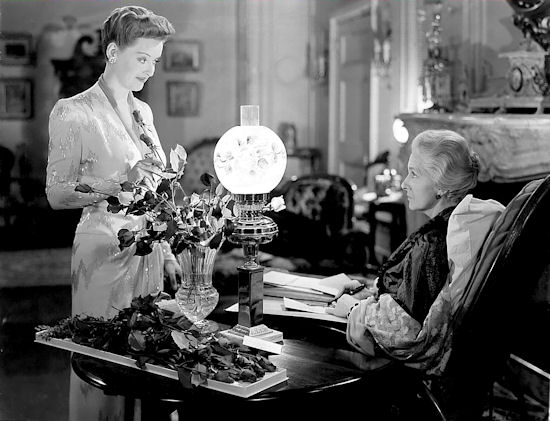 “The film also suggests that a women can change her life, go on a journey, and find a completely new universe…that she can throw off the oppression of a domineering mother…that she can have sex out of wedlock, for pleasure, without punishment…and that she can fill her life with wonderful things, even if she does not marry and produce offspring.  Even though this message comes in one of the most deeply romantic films, of all time, the movie in which Paul Henreid lights two cigarettes, it is a significant message”( Basinger 443).  Even the censors of the time, who habitually required extramarital affairs to be punished, couldn’t bear to reprimand poor Charlotte.

The film struck a chord with two important audiences.  Young people saw a vision of their yearning to fulfill themselves outside their parents’ shadow.  No matter how plain or awkward, they could be validated in their search for love.  And, at a moment when many men were leaving to fight overseas in WW II, the woman left on the home front heard the message that they had the inner strength to be capable and independent, far from the men they loved.

Bette, born Ruth Elizabeth Davis, was a no nonsense New Englander from Lowell, Massachusetts.  Her parents divorced when she was young, and this seemed to focus her enormous energies on a career, rather than domesticity, a quite radical view for a woman born in 1908.  After deciding she wanted to be an actress she worked steadily towards her goal until she reached Broadway, and then Hollywood.  Signed by Warner Brothers, she was never content playing the standard girlfriend, wife, and mother roles, and she fought hard for better parts, walking out on her contract  until forced back by the courts. Obligingly, WB, now guided by Hal B. Wallis, coughed up something worth acting in.  In Jezebel (1938) Dark Victory (1939) The Letter (1940) and Now Voyager  “she shattered the stereotype of the helpless female, so popular on the screen at the time.  Instead, she brought audiences spirited women with inner resources and unwavering standards, not unlike the American women who had survived the Depression to man the home front during WW II” (TCM Guide 49). This film has been called “the quintessential Bette Davis film of the 1940s” (Thomas 71) which brought us the ultra-romantic if un-hygienic lighting of two cigarettes in one mouth, and the song “It Can’t Be Wrong” which was a huge popular hit in 1942. 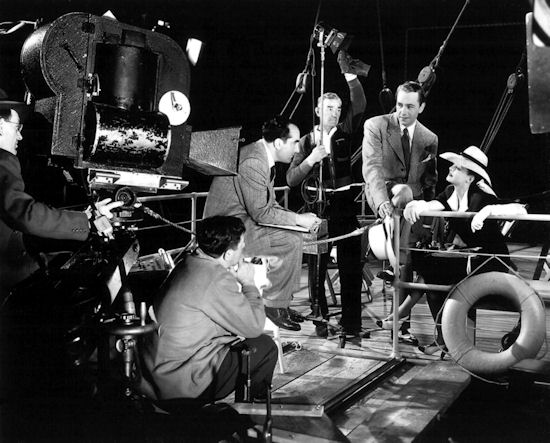 On the set with director Irving Rapper.

The director of the film was Irving Rapper, this was his first film as a solo director.  Davis had requested him, thinking he would be easier to manipulate than William Wyler, with whom she had fought bitterly on recent pictures.  Davis argued endlessly with Rapper, which he understandably found exhausting.  John Loder, who played her discarded fiancé, Elliot Livingston, said, “She put her whole heart and being into that film.  She had a passion and an artistic conviction I have never encountered with another actress.  Going into a scene with her was like going into a hot furnace—and somehow, instead of getting burned by the flames, you came out of it purged, cleansed, you felt you had learned something” (Quirk 248). 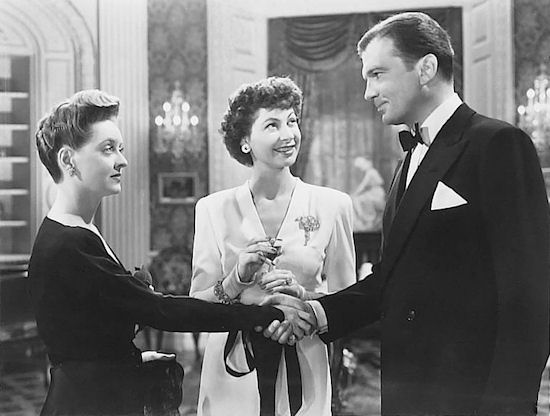 She had not wanted Paul Henreid to play Jerry Durrance.  He had just arrived in Hollywood, after working with Max Reinhardt in Europe, and he had a strong Austrian accent.  Davis, who at one point had lobbied for Ronald Reagan to play the part, realized that rather than a brash, American character, Henried’s soft spoken continental charm was exactly what the part needed.  Henreid had a long career, but his two most famous parts came almost simultaneously, in this film and as Ingrid Bergman’s husband in Casablanca.  The noble, married lover seemed to be his specialty. 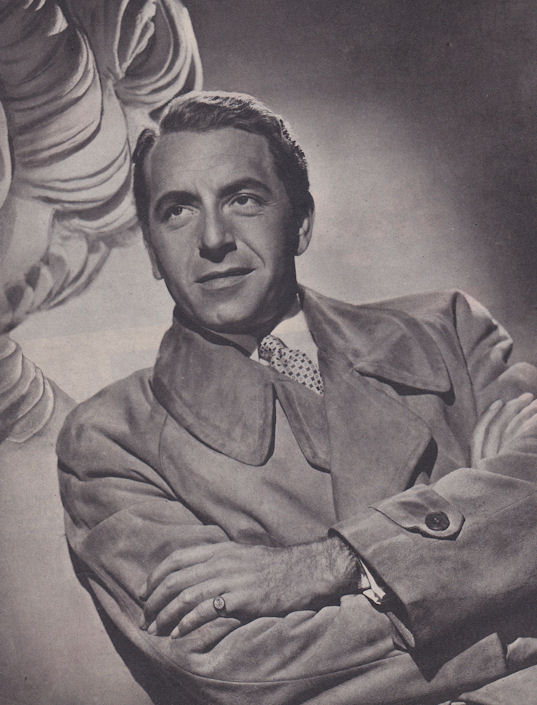 One of the most remembered (and endlessly parodied moments) in 1940s film, is Henreid’s lighting two cigarettes in his own mouth and handing one to Davis.  Although many were happy to claim credit for this, it had first appeared in a film called The Rich Are Always With Us, starring George Brent.  Brent and Davis had a long standing romance and this may have even been a gesture from private life.

Because I saw a steady stream of Warner Brothers movies on tv in Cleveland while I was growing up, as far as I was concerned Orry Kelly was the greatest designer in the history of film.  He studied art in his native Australia and sailed to New York City in hopes of an acting career.  This fizzled, but he painted murals in a night spot and portraits of patrons.  He designed title cards for silent films, and costumes for Broadway reviews.  His Hollywood career began at Warner Brothers in 1932, where a NYC friend, Cary Grant, had introduced him to the head of wardrobe at the studio.  He stayed at Warners for 11 years, then worked at nearly all the other major studios.  His forte was fashionable, modern clothes, and he had the good fortune to collaborate with actresses like Davis, Kay Francis, Olivia de Havilland, Mary Astor, Ingrid Bergman and Dolores Del Rio, his ultra-chic wardrobes were often the focus of studio publicity campaigns. He designed clothes for every important Warner Brothers film of the 30s and early 40s, Casablanca, The Maltese Falcon and so on.  He has 302 costume credits in the movies, and won three Oscars, for An American in Paris, Some Like it Hot and Les Girls. 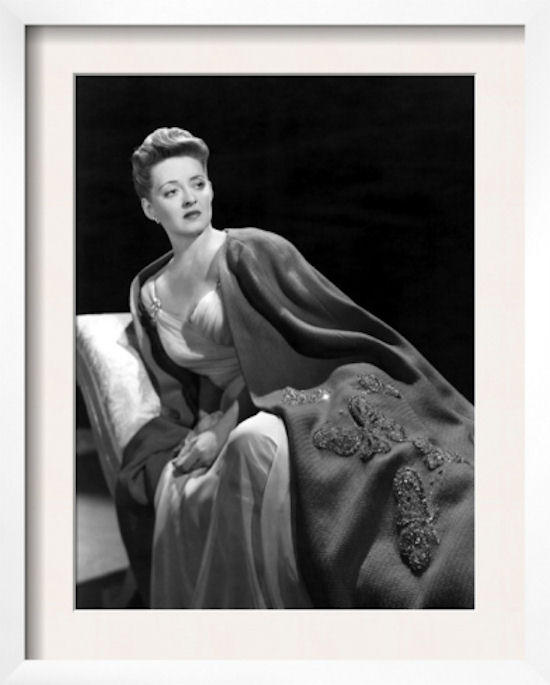 Here is a studio portrait of Davis in her shipboard romance evening gown. The caterpiller has become a butterfly. 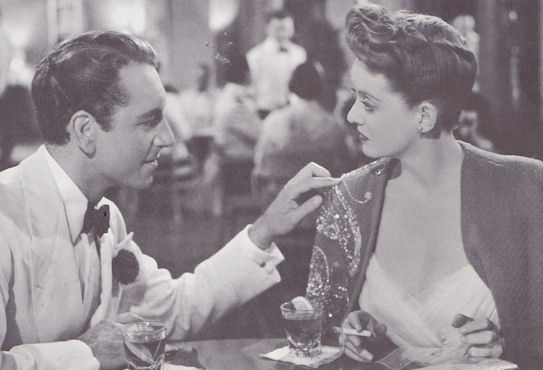 Henreid touches the shoulder of her cape, below! 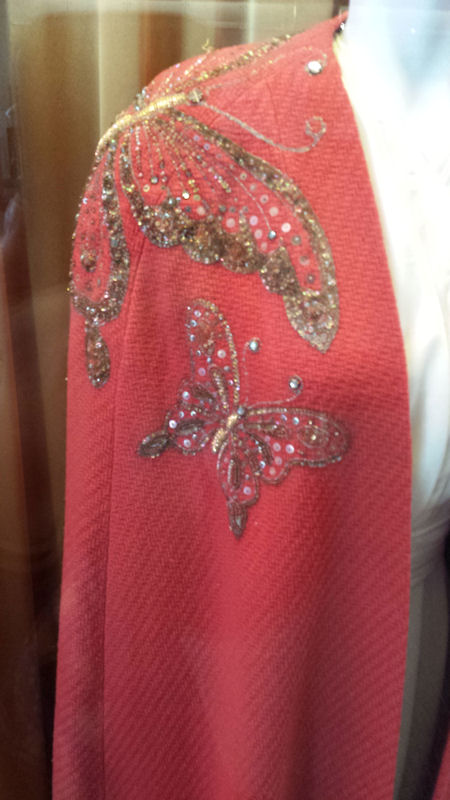 And, here is the actual cape at the Smithsonian! It sits low in a glass case for a good look.

His working relationship with Bette Davis was very close.  She did not have an ideal silhouette for clothes.  She was plumpish with a large and low bustline.  She was perfectly happy, in a period film, to have her figure molded into a period form with proper underpinnings, but in contemporary films she disdained confining shape wear.  Kelly’s skill with cut and form let her appear chic without discomfort or distortion.  “Boisterous, temperamental, addicted to alcohol, often impossible to work with, overshadowed by Adrian and Travis Banton, Orry-Kelly must nonetheless be acknowledged as one of Hollywood’s most important and astute costume designers.  After he left Warner Brothers in 1944 to open a private business, faithful Bette Davis wrote that ‘it was like losing my right arm’” (LaVine 75).

Although the 35mm print was a little rough, the almost full house at the NC Museum of Art loved the film. They gasped a little when Paul Henreid lit two cigarettes at one time, they weren’t expecting it! And, the applause after was long. Such a great audience experience.

Now, Voyager, throughout most of its long history as a novel and film was dismissed as “melodrama” “a weeper” in other words, “a woman’s picture.”  Literature abounds with the coming of age stories of young men, but similar stories for young women are scarce.  Because romantic love is often a focus of female concern, any story which centers a desire to achieve this goal is often dismissed as trivial.  Women’s emotional lives are simply not as important as male adventure…just look at what is playing at the multiplex, if you think things have changed. It took the female critics of second wave feminism to recognize this story for what it was, an important text for female independence. “Davis teaches us strength through her ability to stamp its quality on the attractive claptrap of Now, Voyager. Indeed, Davis calls for our strength, along wth our handkerchiefs, and we can see clearly even when our eyes are awash with tears” (Affron 290). 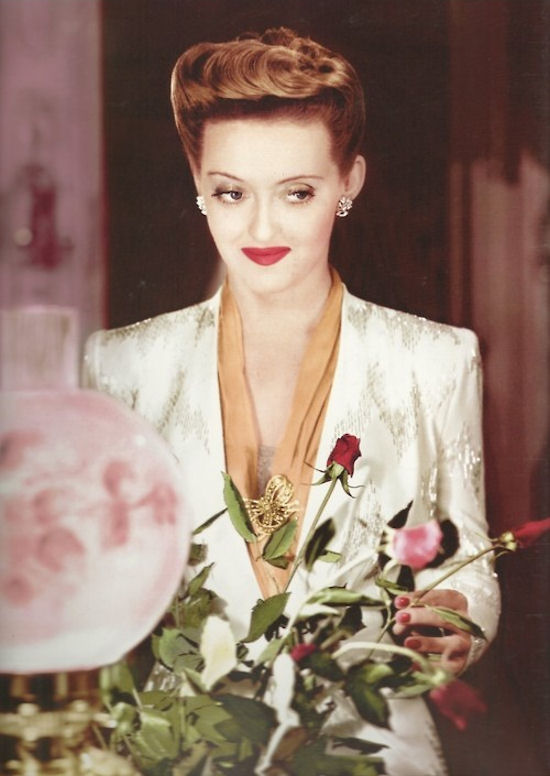 This dinner suit looks amazing on screen. The beaded zig zags shimmer like fireflies in the dark.

The Films of Bette Davis by Gene Ringgold, The Films of the Forties by Tony Thomas, Leading Ladies: A TCM Film Guide, A Woman’s View: How Hollywood Spoke to Women 1930-1960 by Jeanine Basinger, Costume Design in the Movies by Elizabeth Leese, In a Glamorous Fashion: The Fabulous Years of Hollywood Costume Design by W. Robert La Vine, Hollywood Costume Design by David Chierichetti, Bette Davis: A Biography by Barbara Leaming, Fasten Your Seat Belts: The Passionate Life of Bette Davis by Lawrence J. Quirk, Now, Voyager, edited and with an introduction by Jeanne Thomas Allen, Star Acting: Gish, Davis, Garbo by Charles Affron.