“Who hasn’t experienced sheer hatred for the sounds his roommate made while he was eating?” –Neil Simon. A comic institution on stage, big and small screen, classically mismated roomies Lemmon and Matthau try to cope with the reality of their divorces while reinacting the pathology of their failed marriages. Deft comic performances, rafts of zingy dialogue and a strong undercurrent of despair keep this classic fresh.

Neil Simon was inspired to write The Odd Couple by the experience of his brother Danny (also a comedy writer) who moved in with Roy Gerber, an agent friend of his, after their divorces, to ease the financial pain of paying alimony. They quickly discovered the same traits that infuriated their ex-spouses also annoyed one another.  An alternate version of the genesis of the idea is when Mel Brooks was separated from his first wife, he moved in with Speed Vogel, a writer friend, and they quickly began to drive each other crazy. Vogel later wrote that Brooks had “insomnia, a brushstroke of paranoia and “a blood-sugar problem that kept us a scintilla away from insanity.” (Wikipedia).  Both Simon brothers and Mel Brooks were writers on the pioneering tv comedy show, Your Show of Shows, so in any version this is a play with a genesis in a comedy writers’ room.

In his introduction to the screenplay, Simon writes, “Who among us, sometime in his life, hasn’t shared living quarters with another human being? It didn’t matter whether they liked each other or not. Eventually their silent anger became audible, complaining how one whistled in the kitchen, and usually the same awful tune, while the other one claimed control of the TV clicker and blipped through a hundred stations in six seconds constantly through the night? Who hasn’t experienced the sheer hatred for the sounds his roommate made while he was eating? The play represented everyone in the world, including, I imagine, astronauts for weeks at a time.”

Now, of course the plot is reiterated constantly in uncounted plays, films and tv shows, not to mention the constant amateur revivals of The Odd Couple, in both its male and female incarnations. Simon is appreciative, not just of the royalties indicating the ongoing popularity of the play, but that the phrase, “the odd couple” has become such a colloquial part of the English language that his play is constantly being advertised inadvertently in photo captions and newspaper articles. It would be hard to argue that it is not his most famous work.

Just like the characters in the play, Jack Lemmon and Walter Matthau had very different origin stories. Lemmon was a Boston rich kid, his father was the Vice-President of the Doughnut Corporation of America. John Lemmon, senior, was credited with introducing the doughnut to Britain, as well as the previous advertising successes of having invented Mr. Peanut for Planters’ and the little tin Bayer Aspirin box. His mother, on the other hand, was flighty, having delayed a trip to the hospital for little Jack’s birth on account of a good hand at bridge. He was born in the hospital elevator, so alarming his mother that she vowed to have no more children. She spent so much time at the Ritz Carleton bar in Boston that she wished after her death to have her ashes displayed among the liquor bottles; the hotel politely declined. Lemmon’s father traveled on business, his mother drank, and Jack dutifully went to Phillips-Andover Academy and Harvard, taught himself to play the piano, ran track and dreamed of being an actor.

Commissioned an Ensign in the Navy towards the end of WWII, his indifferent military career was useful mainly for the experience that allowed him to play Ensign Pulver in Mr. Roberts so well he won his first Academy Award in 1956. After the war, Manhattan called, and Lemmon spent several broke and hungry years trying to survive on his piano and his acting. TV soap operas led to live dramas, which led to the lead in Room Service on Broadway, where he caught the eye of Columbia Pictures’ despotic mogul, Harry Cohn. Lemmon had extraordinary luck with his first film, It Should Happen to You. He was the male lead, as comedienne Judy Holliday’s disapproving boyfriend. He was directed by George Cukor, and the script was by Garson Kanin and Ruth Gordon, who had written many of the Tracy-Hepburn films. Cohn tried to convince him to change his name to John Lennon, but was satisfied when Lemmon and the film were hits. The year after Bell Book and Candle Billy Wilder would star him in Some Like It Hot and The Apartment and he his career was made. Jack Lemmon made serious films as well as comedies, like The China Syndrome, Missing, Glengarry Glen Ross and Save the Tiger. He won a second Oscar for the latter, and his dedication to the film’s success was so complete, that he did a national press junket to which even college film reviewers like myself were invited.

Walter Matthau was born on the Lower East Side of New York. His parents were Jewish immigrants from Eastern Europe. His mother worked in a garment sweatshop, and his father was a peddler and electrician. During WW II he was a radio operator and gunner on a B-24 bomber. His career began on the stage, where he won Tony Awards for A Shot in the Dark, and for The Odd Couple, in 1965. Matthau came to Hollywood later than the norm to find himself in a discouraging cycle of bits and supporting roles, such as in the Elvis film, Kid Creole, as a dogged lawman in Lonely Are The Brave, and as a heavy in Charade. Billy Wilder had wanted to cast him opposite Marilyn Monroe in The Seven Year Itch. But, the studio refused to cast an unknown actor, and Tom Ewell recreated his Broadway part. Wilder wrote the role of shyster lawyer Whiplash Willie in The Fortune Cookie (1966) specifically for him, Matthau’s Academy Award winning role. I would be hard pressed to describe this film as a comedy, and it dates from Wilder’s later, sour years. In it, Matthau supplies the laughs, as Lemmon is confined to a hospital bed and a wheelchair for much of the film. Their teaming resulted in a comic partnership that would last over the remainder of their careers (they would make 10 films together).

Lemmon and Matthau had never met before Wilder introduced them on the set of The Fortune Cookie. Michael Freedland wrote, “Once the film was completed, Matthau was saying that Lemmon was his best friend. Wilder told me they were like brothers. And Jack described him when met as ‘my wife.’ But unlike Jack’s real wife, Jack and Walter never quarreled. ‘We each know what the other’s next move is going to be,’ he said, ‘we think for each other. It’s uncanny.'” “They kind of clicked” Billy Wilder added, “They were inseparable from the very first day.”  Matthau didn’t call his new pal Jack, like everyone else, but by his middle name, “Uhler.”

Matthau had played Oscar on Broadway, opposite Art Carney as Felix; the play ran for two years. Lemmon said in an interview with Michael Buckley, “The funny thing is that Walter–to this day, despite the brilliance of his performance–has always wanted to play Felix. In Boston, prior to the NY debut of the play, he was begging Mike Nichols, (the show’s director) to switch parts and let Art Carney (who created the role of Felix) play Oscar. When we got to the movie he said, “Jack should play Oscar; he can do anything.” He always wanted to play Felix because it’s against what you would think of him. Every actor is attracted by that.” 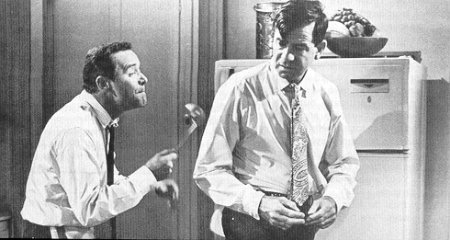 But Matthau said, “Well, I had all the living I needed to do that role. It came very easily, naturally. That is not to say I’m a naturally sloppy person. Nor am I a particularly neat person. I certainly know that kind of character. There’s a kind of inner calm when you do something that works. You’re kind of happy with it.” Their rapport was ideal. Lemmon said, “If in the middle of a scene, someone gets an idea, there’s no hesitation, we just do it.”

Supposedly, producer Howard W. Koch wanted Frank Sinatra to play Felix, and Jackie Gleason to play Oscar, but The Fortune Cookie (and Matthau’s Oscar) changed his mind.  Matthau broke his left arm in a bicycle accident the week before shooting began. This was considerably less serious that the heart attack he had during the filming of The Fortune Cookie. The Odd Couple‘s shooting schedule was rearranged to shoot the second half of the film first, because he needed his arm less.  Some actions were changed, for example, when Oscar holds sandwiches in his armpit while checking his poker hand, it was because of his injury (Shelly 37).

Monica Evans and Carole Shelley play “the Pigeon sisters” upstairs neighbors who are invited to dinner in the hopes of sparking romance.  They were reunited for the first time in 19 years for the 2018 Turner Classic Movies Film Festival.  Interviewed after the film screening, they said that they played the giggly sisters on Broadway (where the play was directed by Mike Nichols) and when Gene Saks directed the film, he had them reproduce their performances on screen, teaching Lemmon and Matthau the timing of their disastrous dinner engagement.  They also played the parts briefly on the 1970s television show starring Tony Randall as Felix and Jack Klugman as Oscar, and did the same, providing the sole continuity between the stage, cinema and tv versions of the play. 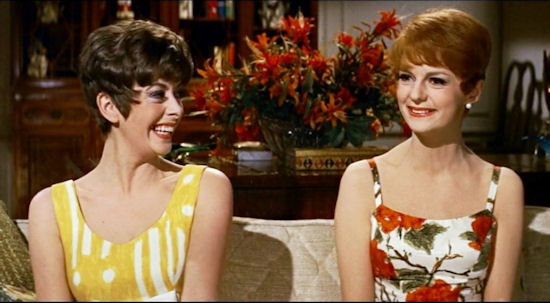 One of the reasons that Lemmon goes into the club with the go-go dancers is because it was important that it be established right up front that Felix, in spite of his feminine attributes, wasn’t gay. The 1960s was a time of sexual liberation in film (from the male point of view) but there was a lot of gay panic. The shoulder rub below was a focus of care to make sure it didn’t seem at all sexual; a manly massage. 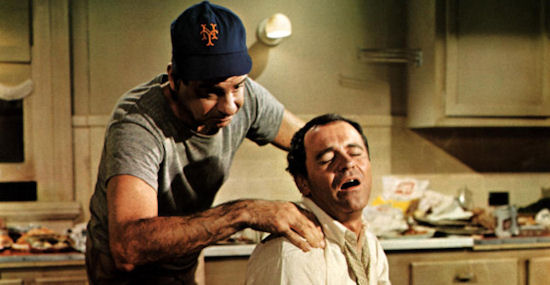 The Odd Couple is a time capsule of a world where divorce was becoming more common (and the non-working wives always received alimony) as well as an un-airconditioned and smoggy New York. The set design is amazing; in the first act, I love seeing the dried out Christmas tree and other holiday remnants amongst the shocking filth and clutter.  And, opening the story up to some location filming in New York allows us to get a glimpse of the city in the late 1960s.

A funny line is still a funny line, especially when the humor is based so strongly on character. And, it is much less sunny than the long-running tv sitcom version with Tony Randall and Jack Klugman as Felix and Oscar. Walter Matthau said in appreciation of his long-time collaborator, “Jack Lemmon is a clean-cut, well-scrubbed Boston choirboy with quiet hysteria seeping out of every pore.”

(Sources include the screenplays, Odd Couples I and II by Neil Simon, Jack Lemmon by Michael Freedland, the three part interview with Lemmon in the Dec, 1984 Films in Review, continuing in the January and February 1985 issues.Photo in the Jan, 1985 FIR), Neil Simon on Screen by Peter Shelly