A borderline psychotic cop is sent upstate to simmer down, and investigate a murder where a gentle blind woman’s brother is the major suspect. “Ray excels both in the portrayal of the corrupt urban environment, a swirl of noirish shadows and violent movements, and in his exalted vision of the snow-covered countryside, filmed as a blindingly white, painfully silent field for moral regeneration” (Chicago Reader).

On Dangerous Ground was a film that I had never heard of, until I encountered it in the 100 Film Noirs BFI Screen Guide, and as one of the 50 Essential Film Noirs in the Rough Guide to Film Noir.  The film’s split personality, from the city’s claustrophobic streets to the vast Rocky Mountain open creates an unforgettable contrast, as crime and perversity thrive no matter what the landscape.  On Dangerous Ground is one of Martin Scorsese’s favorites and an important inspiration for Taxi Driver.

Nicholas Ray discovered a 1946 novel, Mad with Much Heart, by the British writer, Gerald Butler and he thought it would make a great movie. Set in the English countryside, it followed a hard bitten London detective on an investigation. The RKO story department dutifully considered it, concluding that it was “powerful” but “unpleasant.” (MGilligan 190).  Ray thought if he could get a name screenwriter involved, RKO (now ruled by Howard Hughes) would change its mind. Raymond Chandler wasn’t interested (lack of humor made it hard for him to consider adapting it), but A. I. Bezzerides, who had written acclaimed novels and screenplays full of seedy locales and hard boiled types, signed on.  Bezzerides, an important noir screenwriter, cameos at the film’s start as the bar owner, Gato.  Producer John Houseman felt the partnership between Ray and Bezzerides produced a striking yin and yang, “a combination of almost feminine sensitivity (Ray) with a strong macho streak (Bezzerides)” (Rough Guide 150). Ray and producer John Houseman convinced top RKO star Robert Ryan to play embittered cop Jim Wilson, and then Ray and Bezzerides set out to Americanize the novel.

Ray was fascinated with the early, city part of the story, with detective Jim Wilson living “the life of a garbage man, digging and prodding and letting the smell out from human dregs” (McGilligan 192).  One of his early concepts was to film the first part in black and white, and the second part, set in the country, in color, like The Wizard of Oz. Meanwhile, Bezzerides drove around with the LA cops at night, and Ray went to Boston, where he was thinking of setting the story, to soak up east coast law enforcement atmosphere.  This sober research was crucial in the current Hollywood climate, where the left-leaning politics of everyone involved with the film could be called into question at any time.  His casting of Ward Bond, a notorious Hollywood anti-Communist was in part a tactic to deflect HUAC suspicion.

On his way back from Boston, Ray scouted locations, and decided to set the film in Grand County, CO, in the Rocky Mountains.  The location was a four hour flight from LA, and filming in late March meant lingering snowstorms, blustery winds and bright glare off the ice and snow.  Granby and Tabernash, CO, welcomed the Hollywood cast and crew, and many locals were given bit parts.  Looking back, Ray would praise the non-professional cast in glowing terms. 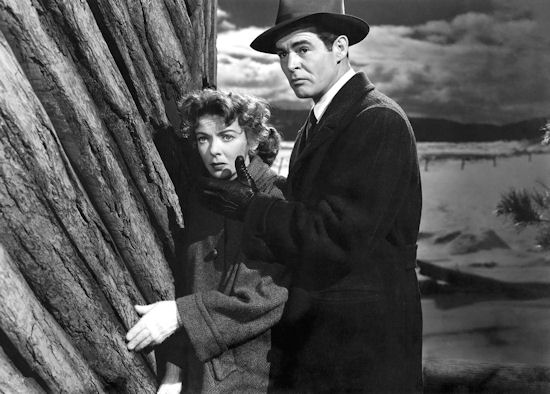 Robert Ryan is a key film noir leading man, with his powerful body and intimidating scowl.  Born in Chicago, he took both violin and boxing lessons as a kid.  He graduated from Dartmouth College with an English degree, but after college, he worked physical jobs, construction, ranching, working in an ocean liner’s engine room.  “I just didn’t know what I wanted to do.  If times had been different, people would have called me a bum.  I spent seven years of vagabonding, working at this and that and not very interested in anything I was doing” (Hansberry 569). In 1936 he joined a Chicago amateur theater group, and his path was set.  He acted on stage, and eventually, won an RKO contract.  His first important role was as a psychopathic anti-Semite in Crossfire, a hard-hitting role that garnered him rave reviews.  He quickly became a familiar face in thrillers and crime films.  “I’ve played more heroes than villains.  That most people have the impression that all I’ve played is heavies and villains leads me to believe that they never saw most of my pictures.  Yet, I’ve never stopped working, so I can’t complain” (Hannsberry 568).  Married for over 30 years to a colleague he met in an acting workshop at the beginning of his career, his last films, The Wild Bunch and The Professionals reintroduced his tough characters for the 60s generation.

A list of twelve names was submitted for the female lead, but Ida Lupino’s production company, Filmmakers, was already part of RKO.  She had been under Warner Brothers contract for years, but was now pursuing a career as a director.  She had some spectacular parts through the 1940s, but after leaving WB, she spent most of her career behind the camera, as one of the few women directors of the classic Hollywood era.

She was born to be in show business, her family had been in the theater since the Renaissance, and her father, Stanley Lupino was considered to be one of the best actor comedians in Great Britain.  She grew up backstage, writing and performing, and studied in London at the Royal Academy of Dramatic Arts.  She acted in British and American films, but her first big hit was in the Victorian set Adventures of Sherlock Holmes, with Basil Rathbone as the great detective, and then acted as the spirited Cockney guttersnipe opposite Ronald Colman in Rudyard Kipling’s The Light That Failed.  It was because of her rapturous reviews in that part that she was given They Drive By Night (1940), a film scripted by Bezzerides from his novel.  Since her character in On Dangerous Ground was blind, she prepared by spending time observing the patients of a notable LA ophthalmologist. 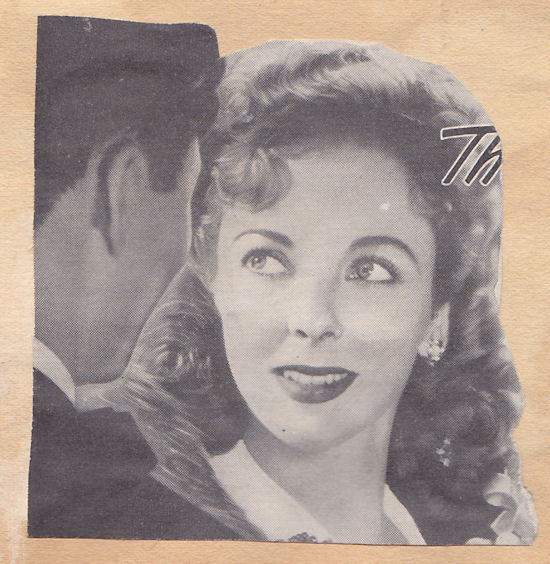 A scrapbook photo of Lupino.

Lupino’s character’s brother was played by director Ray’s nephew, Sumner Williams. Although he had a small part in Knock on Any Door, he was not a very experienced actor and was nervous in front of the camera.  Ray was protective of him, Williams said, “Nick had a way of instilling a feeling for a moment in a character.  He knew that I had the character down, we didn’t work on it together, just at rehearsal, he would suggest very subtly, never pushed you in any direction.  You never felt as if he were pulling you around on a chain like a dancing bear” (Eisenschitz 156).

In the script, the relationship between the detective and the blind woman overwhelmed the solution of the mystery.  Ray insisted on an ending that Bezzerides distained as needlessly sentimental.  But Ray wanted to stress that the two characters were like two sides of the same person, and reconciliation was possible. Lupino was rumored to have directed the ending scenes herself.  It would appear that a conflict between the writer and director about how the film should end resulted in the two lead actors doing it their own way.

The photography was by George E. Diskant, whom Ray had worked with before and admired.  Diskant loved to take risks, to shoot in near darkness, and use a hand held camera. The nighttime city scenes were mostly filmed in San Francisco’s Tenderloin, daringly, in almost total darkness. “The city sequences, all shot at night—dark streets, alleyways, bars and cheap walk up apartments—paint one of the bleakest noir pictures of city life.  Everything is refracted through Wilson’s bitterness, and some hand-held shooting—unusual for the time—implicates the audience in his violent point of view” (100 Film Noirs 198).  He switched to high contrast film for the bright snowscapes, creating another contrast between city and country. 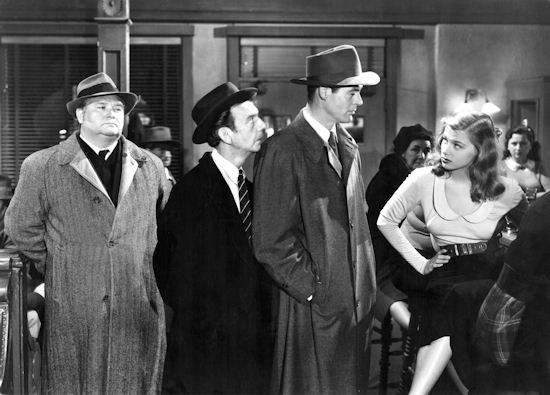 The music was by Bernard Herrmann, whose scores are often associated with Alfred Hitchcock.  Producer knew Herrmann from his Mercury Theater days and he wrote a score for full orchestra, 65 musicians, including viola solos by Virginia Majewski. His “violent scherzo” for the chase was according to Herrmann’s biographer, one of “the most exhilarating pieces of film music ever written” (McGilligan 196) and some say it was his favorite score.

Robert Ryan often played anti-social characters with a tender core. If Lupino was considered a 2nd string Bette Davis, Ryan often played parts which suggested a 2nd string Humphrey Bogart. In fact, Lupino’s role here is reminiscent of her part opposite Bogart in High Sierra. Ryan said, “Nick had, I think, great respect from me.  Right from the start of our collaboration, he offered me very few suggestions.  He took a lot of trouble to get a certain reality.  During shooting, he talked to me (about cops) as if he were telling me a story…he never told me what to do. He was never very specific about anything at all (Eisenschitz 156). Off screen Ryan and Ray “were kindred spirits.  Besides chain-smoking, heavy drinking and awkward family relationships, the two shared an eternal desire “to write something” and they collaborated tentatively on a romantic comedy screenplay on set which, unsurprisingly, fizzled.

Ray was considered an “arty” director, and in spite of the mostly positive reviews, the film was held back for two years, and finally released on a double bill with the B Western Indian Uprising, to bolster its box office chances. The effort was in vain, the film lost $425,000. “Contemporary reviewers were puzzled and unready for such a raw and bizarrely structured experience, with its jarring two part structure and enforced saccharine ending” (Rough Guide 150).

The film was given its power by a dicohotmy between the city and country halves of the film.  “The first, adopting all the formal attributes of the thriller genre is keyed to an unremitting darkness: describing a character, it is virtually plotless.  The second is bathed in white light, its narrative drive the idea of a quest for lost innocence” (Eisenschitz 149). 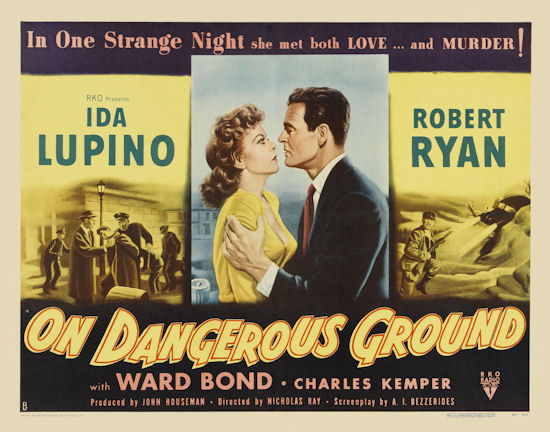