A shy loner, missing no detail in his urban neighborhood, is victimized by a murderer when he observes his crime.  Based on a novel by master mystery writer Georges Simenon, Duvivier uses France’s postwar malaise over collaboration to craft a film of heartbreaking betrayal.   “A dark and compelling film, chilling to the bone, long little-seen but now widely accepted as a neglected classic (LA Times). 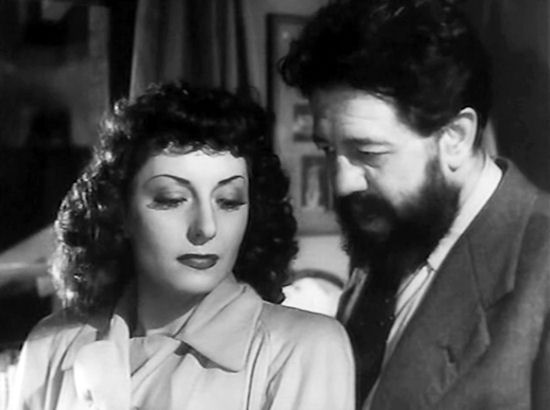 Last week, we saw an American version of a French crime film, and this week, we see an original French film noir.  Last week’s film lacked a femme fatale, and this week’s film has one, but the French version, not a woman bent on destroying a weak or love sick sap, but one who is so in love, that she is willing to destroy someone else.  Her man is not to be used and discarded, but protected at all costs.  It was adapted from a novel by Georges Simenon, an insanely productive writer, who penned over 500 books under his name and 27 pseudonyms. His novels have been adapted for the screen at least 300 times.  He was most well-known in the US for his Inspector Maigret novels, at least one of which Duvivier also adapted. 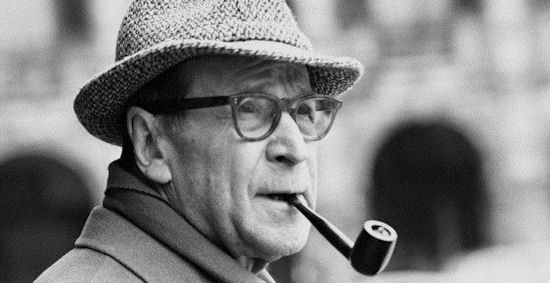 “If I were an architect and I had to build a monument to the cinema, I would place a statue of Julien Duvivier above the entrance,” wrote Jean Renoir.  Duvivier made 70 films over five decades, beginning in 1919, working within the studio systems of not just France, but Hollywood, Germany, Italy, Spain, Britain and Czechoslovakia.  In the 1930s, he was France’s most famous director, and his work was admired by many colleagues, including Orson Welles and Michael Powell and envied by Ingmar Bergman.  But because of his mastery of a kind of cinematic artifice, he was disdained by the writers and directors of the French New Wave, and his reputation, sneered at as part of the “cinema of quality,” became tarnished.

He was born in the northern city of Lille in 1896, and was first an actor, then an assistant director. His ascension was rapid due to the manpower diverted to the machinery of WWI. He learned his craft during the silent era, and his last silent film Au Bonheur des Dames was remarkable, I was lucky enough to see it at the San Francisco Silent Film Festival, where it was a standout.  But, it was his sound films of the 1930s which became touchstones of classic French cinema. During his career, he explored many genres, from adaptations of great literature to comedy, film noir, and the poetic realism of Pepe le Moko. He directed several films in Hollywood, both before and during WWII, but found, as did many of his expatriate colleagues, that the studio system was stifling compared to the directorial freedom they enjoyed in France. 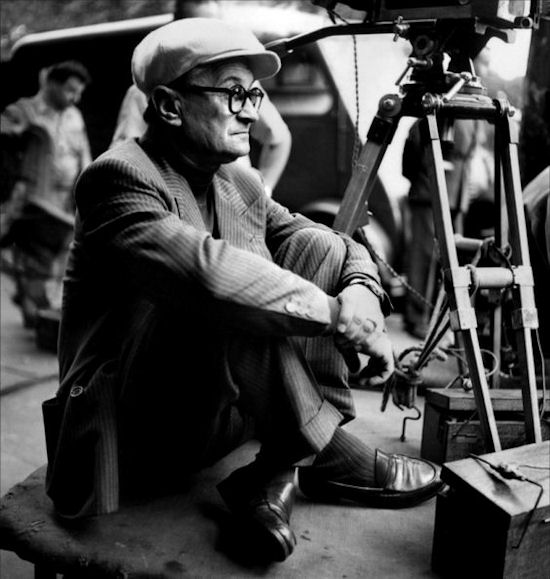 His first postwar project, a noir adaptation of Georges Simenon’s 1933 Mr. Hire’s Engagement (later adapted by Patrice Leconte in 1989 as Monsieur Hire), stars Michel Simon as a reviled voyeur framed for a murder by the girl he adores.  These two films emphasized different aspects of the novel. Considered amongst the finest of Simenon adaptations (but who has seen all 300?) it is now beautifully restored by Rialto Pictures.  The film was well reviewed in the US, but perhaps touched too much of a nerve in France, where it was not praised, both because of its subject and because it was considered a cultural betrayal for Duvivier to have found refuge in Hollywood during WW II.

It stars Michel Simon, a great French character actor who specialized in portraying those who were crude or grotesque, exposing by his art, their unexpected humanity and vulnerability.  He left home at 16 to scrape out a living in Paris as a boxer, photographer and music hall performer until he made his stage debut, followed by the movies in 1925.  He acted in important films by Jean Renoir, Jean Vigo, Marcel Carne and Rene Clair, as well as Duvivier.  His biography states that he was only briefly married, and that he lived his life alone with four apes and a parrot. 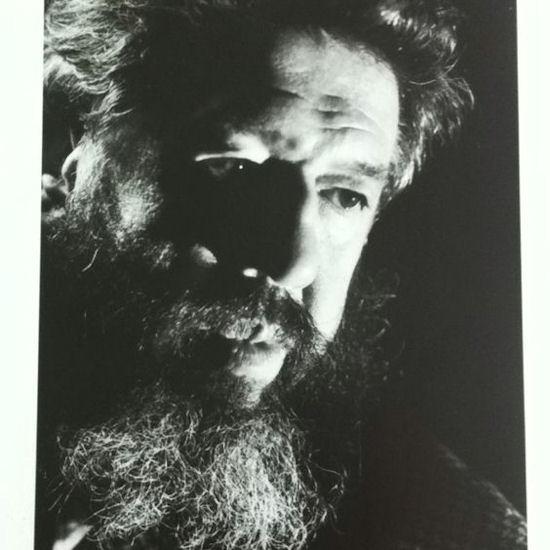 Viviane Romance first appeared on stage at the age of 13. She danced in the chorus of the Moulin Rouge and did the Can Can at Bal Tabarin before becoming Miss Paris of 1930, which caused a scandal, since she already had a child. A bit part in Jean Renoir’s Le Chienne lead to a cinema career, and she was a leading actress in France, playing glamorous femmes fatale and other fallen women. Her heyday was from the mid 1930s through the 1950s. 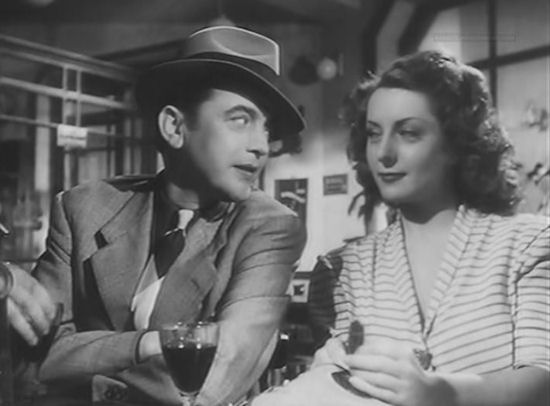 “Duvivier reflected in 1946, while filming Panique, that he was perpetually drawn to the murkier side of human nature: ‘I know it is much easier to make films that are poetic, sweet, charming, and beautifully photographed, but my nature pushes me towards harsh, dark and bitter material.’ Again and again, he returned to the same core themes – pessimism, misanthropy, the cruelty of the crowd, fatalism, defective memory, masquerading, exile and the impossibility of escape” (Senses of Cinema).  It also reflects the conflicts around gender relationships in society after the way, where men, returning from the war, were paranoid about whether or not their women had collaborated with the Nazis in order to survive.  “His is a paranoiac cinema – fear of crowds, fear of women, fear of the group, fear of the unknown. He returned again and again to the notion of the crowd dynamic, and how individuals were often threatened, humiliated or overrun by the group” (Senses of Cinema). Here, the couple is separated not by war, but by her taking the rap, and a prison sentence for her boyfriend, but the issues of trust and betrayal are the same.

“Panique is something altogether more bracing and terrifying: a tingling, compact, kaleidoscopic thriller that conveys a potent and sardonic worldview. Seeing it today in a beautifully modulated print, with Lenny Borger’s lucid and colloquial subtitles, should send shivers through audiences already worried about mob rule, enforced conformity, and a willingness to pin blame on anyone different” (Film Comment).  The casting and direction of all the supporting players who embody the everyday residents of Hire’s small town (a set created on a studio backlot in Nice) is chilling, we know them so well, as they coalesce into a mob. 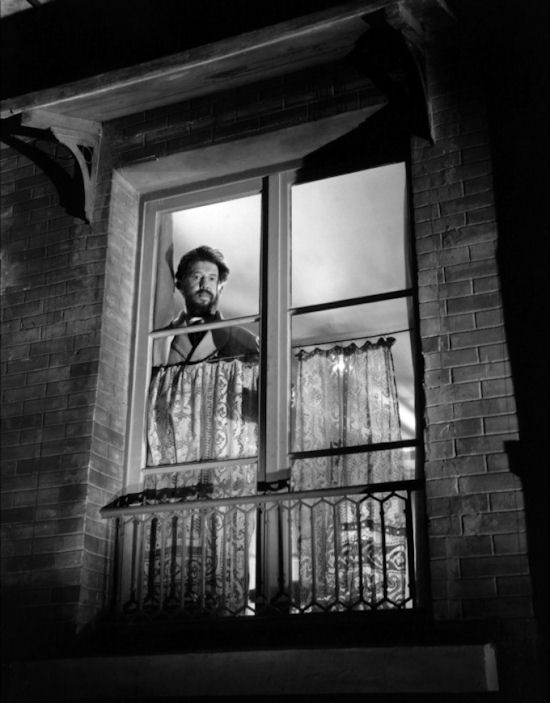 “Throughout the movie, Duvivier’s use of the carnival is distinctive and chilling. Could it be mere coincidence that peers like Carol Reed in The Third Man and Alfred Hitchcock in Strangers on a Train and Billy Wilder in Ace in the Hole (aka The Big Carnival) would soon fashion major suspense scenes packed with anxiety and moral resonance around sideshows and carnival rides?” (Film Comment).

M. Hire evokes Lon Chaney’s lovelorn characters, like the Hunchback of Notre Dame and Erik, the Phantom; men whose ugliness confirms they will never find the love their gentle hearts crave. Even King Kong seems to make a shadowy appearance at the end. This film is unusual in that both lead characters are ambiguous. M. Hire is deep down a nice person, but his is a little creepy, peeping and stalking the woman with whom he instantly, inexplicably falls in love. Alice is torn, she’s convinced herself she is deeply in love with Alfred, but still opens up to M. Hire’s kindness, an emotion with which she is clearly unfamiliar.

“You might get an ulcer watching Panique, as Duvivier portrays how the good-looking Alfred and Alice’s ruthlessness and duplicity find purchase in the community’s preconceptions about Hire, who we learn is Jewish. (The significance would not have been lost on audiences in 1947 France; this was Duvivier’s first film back after a wartime sojourn in Hollywood.) The tenderness with which Hire opens up to the girl, making him vulnerable to her betrayals; the callous, offhand manner in which Alfred plans to sow suspicion about the man; the ease with which the smallest hint of innuendo is immediately seized upon by a populace already marinated in contempt … well, let’s just say it’s not an easy watch.

“Except, of course, it is. It’s a joy to watch, because Duvivier is a master of shadows, of movement, of blocking. His film has the deep blacks and dark impulses of film noir but also the expansive, sociological sweep of a Western, with its portrait of a community on edge. His camera moves with purpose and power, exploring the full geography of a space — a geography that, we suspect, will later become crucial. He goes to town on the material’s visual potential, and a visiting carnival adds an extra sense of delirium” (Village Voice). 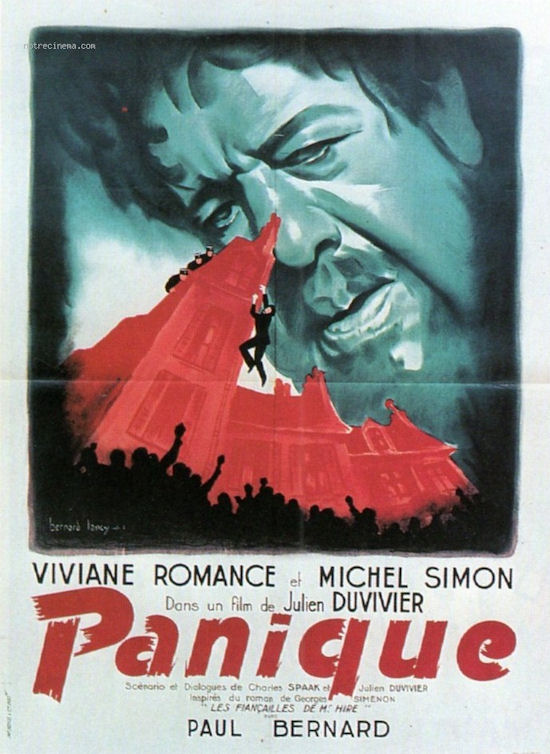