A shamelessly entertaining movie about a Depression-era father-daughter (maybe) team of swindlers, won Tatum O’Neal an Oscar. Jewel-like photography, rat a tat dialogue and expert comic timing make it “everything a road picture is supposed to be, a life-changing personal journey, a quest, a bit old-fashioned and a hoot” (Roger Moore).

Peter Bogdanovich once said, “I was born, and then I liked movies” (Harris p. 1). He not only loved movies from an early age, but programmed them at museums and rep house theaters while still a teen. He studied acting and directing, and, became interested in interviewing many of the great directors he idolized. Just after marrying production designer Polly Platt, they took a cross country trip together to Hollywood. He started working for Roger Corman, who gave many directors their low-budget first chances, and his first major film, The Last Picture Show garnered rave reviews, Oscars, and began the careers of actors like Cybil Shepherd, Cloris Leachman and Jeff Bridges.

After The Last Picture Show and his screwball homage to Bringing Up Baby What’s Up Doc?, with Barbra Streisand and Ryan O’Neal, Bodganovich hoped to do a Western with John Wayne, James Stewart and Henry Fonda, a project which never materialized, and Paramount suggested this film, instead.

Addie Pray, a novel by Joe David Brown, was set in Georgia. Bogdanovich didn’t want to set the film there, “so we wouldn’t have to do those phony Southern accents, which I hate” (Harris 138). The film does not follow the source closely, throwing out the whole second half of the novel. Bogdanovich decided to plumb new location territory by setting the film on the bleak Midwestern prairie, specifically Hays, Kansas, and St. Joseph, Missouri. It was meant evoke the cross country trip Bogdanovich and Platt had taken in 1964, on their way to Hollywood. Location shooting in Hays, the town from which General Custer rode to his doom, was tricky. Already, mid-American was being malled and chain-stored to death, but in Hays and the surrounding towns, Wilson, Dorrance, Liebenthal, Gorham, Russell, Natoma, Lucas and Hoisington and Luray, “you can still find locations that haven’t been affected too obviously by progress, and also a period can be pieced together for the camera by taking a house here, a field there, an old hotel in one town, a granary in another, a dirt road, a barbershop, a hardware store, a train depot, all within a fifty-mile radius of our home base” (Bogdanovich 246).

Platt thought Tatum O’Neal, who she knew socially, would make a great Addie Pray, and Bogdanovich agreed only if Ryan O’Neal played her on-screen father. Tatum, named for jazz pianist Art Tatum, was 8 years old when Paper Moon was filmed. Her mother, Joanna Cook Moore and her father divorced in 1967. Tatum had a high profile career in her tween years, also starring in The Bad News Bears with Walter Matthau and International Velvet as well as Nickelodeon for Bogdanovich with her father and Burt Reynolds. In 1986 she married tennis star John McEnroe, they had three children and divorced in 1994. She has continued to act, recently on the tv series Rescue Me and on Dancing with the Stars. But, she has struggled her entire life with addiction, and her childhood was so sad, I won’t recount it here. Neither parent made the effort to attend the Oscar ceremony where she became the youngest performer to ever win a competitive award. She went on stage alone, in a little tuxedo she had made in appreciation of the style of one of her father’s girlfriends, Bianca Jagger. Let it just be said that there are far worse things than having your parents steal your money, like Shirley Temple’s parents did.

Tatum’s audition for the part was informal, a walk on the beach with Bogdanovich. “I was a scrawny, knock-kneed little waif at seven, with tangles in my hair and no acting training—in fact with little formal schooling at all—but Peter took me on. He’d later say that it was my scrappy attitude that got me the job” (O’Neal 3). Reflecting on the film when seeing it at a 30th anniversary celebration, she said, “Seeing that little face again reminded me that pain was the flip side of feistiness. My own young life had eerily echoed Addie’s even though my mother was still alive. In the grip of addiction, she virtually abandoned me and Griffin, leaving us in squalor—starving shoeless and ragged—as well as beaten and abused by the men in her life. Ryan finally came to my rescue, just as he was doing onscreen in a sputtering old jalopy, playing Moses Pray, the Bible-peddling con man who is probably Addie’s pa. He’d thought working together in Paper Moon would help us bond. ‘This is her first opportunity to channel her mind and energy into something constructive’ he told the press. ‘And this movie would give her something she never had enough of—love’” (O’Neal 4).

She said, “It is a measure of Peter’s genius as a director that he recognized how deeply I identified with Addie’s bruised innocence, steely wariness, and above all, resilience. I knew firsthand what it would take for her to survive” (O’Neal 5). She was paid $16,000, although the Paramount film grossed $50 million. 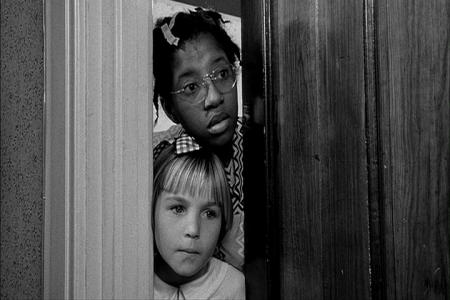 The production and costumes were designed by Polly Platt. Platt designed all of Addie’s dresses (the tomboy clothes were from stock) and her distinctive hat. It’s decorated with a piece of antique lace that came from the Paramount costume storage. A seersucker suit pulled from stock had been worn by George Raft. Madeline Kahn’s clothes were also designed, as were her underpinnings, to give her the proper jiggle.

The song which gave the film its title was written by Harold Arlen and Yip Harberg, the team behind “Over the Rainbow.” Knowing that they had a carnival scene meant they could include an actual paper moon in the script, and the photo became a way to resolve the plot, along with the chance of finding the perfect winding road. Certain plot twists were seat of the pants, and Bogdanovich, as a former actor, could show the actors what to do, if not always tell them.

Orson Welles said “every performance looks better in black and white.” Bogdanovich had just received acclaim for The Last Picture Show, another black and white movie, but he also feared that the O’Neals, in color, would look too blond and attractive to be convincing as desperate and penniless. Laszlo Kovacs compositions are deep focus (another homage to Welles) and extremely long, sometimes 5-6 minutes. One reason that O’Neal won the Oscar as best actress was the appreciation that her performance was not built on moments, but her ability to sustain a her acting through extremely complicated camera set ups, and long stretches of dialogue with lots of ‘business.’

Bogdanovich said of his location experience, “We cast many of the smaller roles, here—the bits, the stand-ins, the extras—and they come by the hundreds from miles around to try out, mothers, grandmothers, spinsters, teachers, children, farmers—many of them having played a small role or the lead in a school production two decades ago (Bogdanovich 247). The excitement of having a big Hollywood production in their midst was so thrilling, they gladly suffered the disruption that the filming brought into their lives. Not the least of the attractions was the influx of young men from California, glamorous by association, even if they weren’t actors. There were even some dust-ups in the Rose Room of the Holiday Inn, as some of the local boys objected to the attention their girls were getting from the Hollywoodlanders. Bogdanovich observed, “But still, as we leave, the Holiday Inn marquee puts it quite succinctly: “Thanks for having slept with us, goodbye, Paper Moon.” (Bogdanovich 247).

The intention was to make the film touching but not sentimental, funny but not slapsticky. The juxtaposition with last week’s Shirley Temple movie was irresistible, although Addie, of course, is intentionally a vinegary antidote to Shirley’s sweetness, more like bratty Jane Withers. Shirley symbolized the plucky “can do” Depression attitude, and Addie Pray is as self-reliant as Shirley ever was—they both yearn for a family made whole.