When a prank unearths a parchment confirming a street in London is territory belonging to the Kingdom of Burgundy, the local residents, stifling under the austerity of post-war rationing stage a Brexit of their own.  A classic Ealing comedy,  penned by the author of The Lavender Hill Mob, it stars a phalanx of cracking character actors. “For British cinema, 1949 was an annus mirabilis. It was the year that Ealing Studios… released not one but three comic masterpieces: Kind Hearts And Coronets, Whisky Galore! and Passport To Pimlico (Empire Magazine).

Passport to Pimlico was inspired by a true-life incident.  During World War II, Princess Juliana of Holland lived in exile in Canada.  When it came time to deliver her baby, there were fears that her child would not be eligible for the throne, having been born outside the Netherlands.  The Canadian Parliament passed a law making the hospital room Dutch territory for the duration of her labor and delivery.  The screenwriter thought the plot of this film was the best he ever devised, and he was Oscar nominated for it.  “The film beautifully captures those most quintessential English traits of individualism, tolerance and compromise” (Sellers 135).

Ealing was the premiere British Studio during the 1940s and 50s. The head of the studio was Michael Balcon, the grandfather of Daniel Day-Lewis. This film is considered “the first of those universally loved exercises in national eccentricity” and it speaks directly to the austerity imposed by the postwar Labour government between 1945-51.  The script by T. E. B. Clarke was pure wish-fulfillment (Dixon 96). Like many Ealing films, it’s a celebration of community and indomitable British spirit.

Pimlico is near Westminster, on the north side of the Thames, close to Big Ben and Buckingham Palace. Pimlico was shot in the street, like an Italian neo-realist film, at a bombsite off Lambeth Road, on the south side of the Thames.  It took a long time for the British government to clean up the bomb damage from WW II, often just blocking off the craters to prevent people falling in.  The studio didn’t need permission to film on the street, as long as the local police station were informed.  The second unit directors had to control the crowds, who were excited about the novelty of location filming. A set was built on the bombsite, but then had to be returned to its original damaged state so the locals could claim war damage compensation.  The location now houses 1960s era blocks of flats. 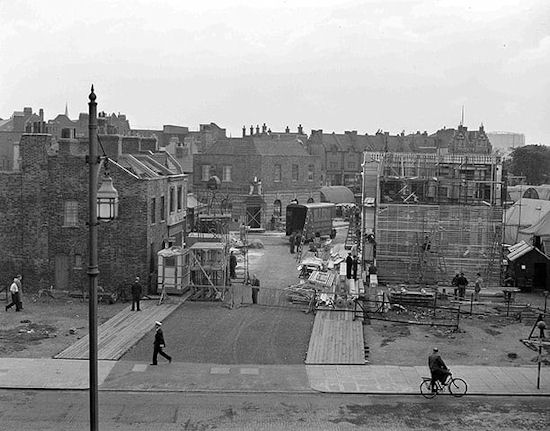 Here is a photo of the set being built. There is a fantastic archive of behind the scenes photos, see below for link.

When you visit London today, some bomb damage has been left as a memorial.  Near the hotel where we stayed last summer, there is a plaque on a bridge underpass cratered with shrapnel, where the Blackfriers Railway Station was bombed during WW II. 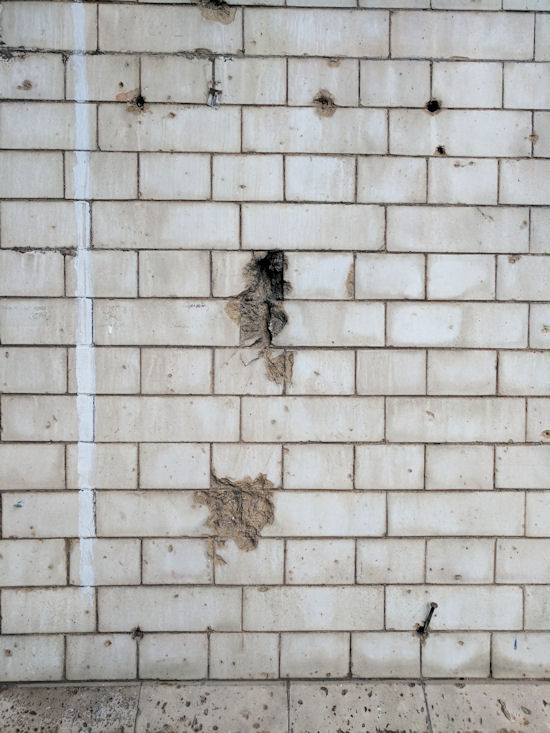 Clothes rationing began in June 1941 and lasted until March 1949; food rationing persisted until July 1954.  Rationing in Britain after the war was actually worse than during the war.  Items that were once available, if scarce, were dried eggs, fish, cheese, fruit, and bread.  After a harsh winter in 1947, these items completely disappeared, the government tried to ease tension by replacing them with whale meat and barracuda.  When a grocer tempts a shopper with “I’ll pack it in with a nice bit of cream” this is a line that was almost cut by the British censor (Dixon 103).

While the film was being made, the government finally ceased rationing, which sent the studio into a panic, because it would make the film seem instantly outdated.  But, instead they filmed a brief shot with a funeral wreath around food ration coupons and a clothing ration book.  There was no music under the shot, because all the music had already been recorded.

The costumes are by Anthony Mendleson, the Ealing house designer and wardrobe supervisor.  The clothes were likely bought “off the peg.” Mendleson often had the actor with him when making shop purchases. Because of rationing, a costume inventory had to be submitted to the Board of Trade.  Although they were relatively free with ration coupons for film production, the designer had to hold back coupons in case of an emergency, and the Board demanded an accounting of where the coupons had been used. 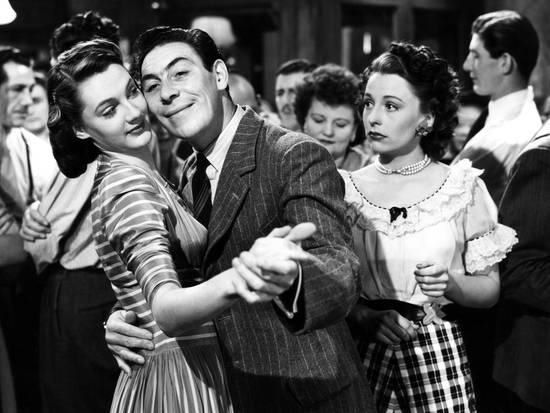 British actor Michael Redgrave came to Hollywood in 1949 to make The Secret Behind the Door, and he arrived in California with his ration coupon wardrobe. “Clothes, like everything else, were still rationed in England.  I had spent all my clothing coupons before I left London, thinking I ought to look the part of a visiting English ‘star.’ But, in New York, I was met by someone from Universal International and whisked to a suite in the Sherry Netherland.  I was given a fistful of dollars for expenses. My navy blue chalk stripe suit and ill-fitting dinner jacket were jettisoned and I acquired an entirely new wardrobe” from Saks Fifth Avenue (Redgrave 176).

The director, Henry Cornelius, had been a producer at Ealing, but had never directed a film.  To one young crewmember, “He was a lovely, fairly elderly man but with a great sense of humor” to 18 year old Barbara Murray, it was a different story.  “He had a vicious tongue, and he would humiliate you in front of the extras” (Sellers 136).

The role played by Margaret Rutherford was originally set for a male actor, Alistair Sim.  When he couldn’t do it because of a schedule conflict, the idea came to cast a female in the role, which did not require a single word of dialogue be changed.  Margaret Rutherford, who liked the way the British were portrayed “accentuating their individuality and decency, while acknowledging some parochial idiosyncrasies” (Wikipedia). The comedy team of Basil Radford and Naunton Wayne are featured. They first appeared in Alfred Hitchcock’s The Lady Vanishes and were so popular that they brought their “upper class twit” routine to many other films and radio shows. They are a bit of a mystery to the American viewer. 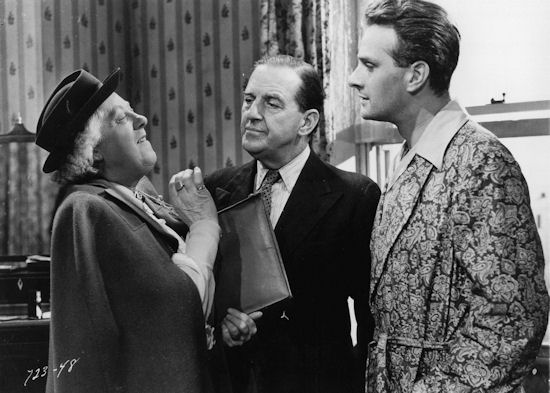 The delightful score is by Georges Auric, a French composer.  He was the youngest member of the group that called themselves Les Six, which included Darius Milhaud and Francois Poulenc, he was also a friend and colleague of Jean Cocteau and Erik Satie.  He wrote scores for nine Ealing films, some of their most important ones, even though some scoffed that a Frenchman could contribute to the output of a studio that considered themselves a bastion of British character.  His music was thought to urge the repressed nation towards its more fanciful impulses. He wrote several films scores for Cocteau, including La Belle et la Bete, and for American films like Roman Holiday.

The film easily recouped its costs, even though rainy weather during the exterior filming ran the film over budget and over schedule.  Director Henry Cornelius and studio head Michael Balcon argued constantly, which bullied Barbara Murray secretly enjoyed.  But, Cornelius would not direct another film for Ealing.

The film is a nostalgic evocation of the unity of Britain’s “Finest Hour” for after their little rebellion, the Burgundians endorse their previous national identity.
The reviews were enthusiastic:  “Every line, every gag, is a little masterpiece of wit each character, and indeed every member of the cast provides a gem of comedy acting at its highest and best” (Sellers 140). This is a new restoration of the film from Rialto Pictures. 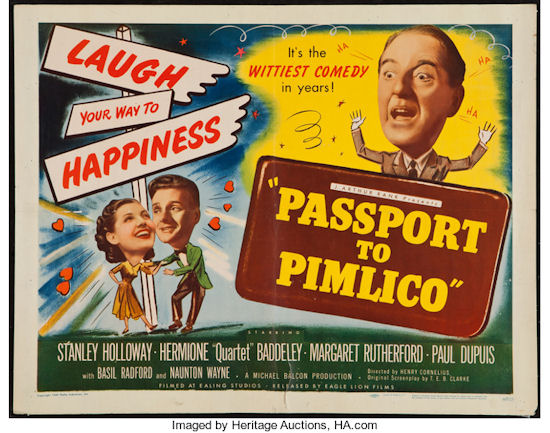 There are some fantastic behind the scenes photos of the film here: https://www.theguardian.com/film/gallery/2012/may/28/passport-to-pimlico-in-pictures