A slightly chilled Normandy beach vacation inspires an amorous round robin, witnessed by a grave teen. It begins with a 12th century proverb, ”A wagging tongue bites itself.” Rohmer’s films “combine images, language, action and cinematic narrative fluidity to create a kind of cinema that no one else has ever done before.—New York Times.

Eric Rohmer was born Maurice Scherer in 1920. He taught literature in a provincial French high school while writing, under his pseudonym, as one of the founding members of the journal, Cahiers du Cinema. His article, “Cinema, the Art of Space” which was written in 1948, is considered one of the defining texts of the New Wave generation of filmmakers. He wrote about 250 articles between 1948 and 1960, and became journal editor in 1957. He often looked back to silent cinema, idealizing a time before montage (which existed only in the earliest silent days) before different shots were edited together to fabricate a new meaning apart from that established when the camera is simply pointed at its subjects.

Rohmer came to films a bit later than many of his contemporaries, when he saw Quai des Brumes (1938), Michel Carne’s masterpiece of poetic realism. Between the youthful ages of 18 and 25, Rohmer outlined many of the scripts he would spend a lifetime filming. He, along with his colleagues at Cahiers du Cinema, absorbed vast amounts of American genre film finally available in France after WWII, which Rohmer, for one, never imitated. When he began his writing career, he changed his name, perhaps so his devoutly Catholic mother would still think him a school teacher. He has used more than one pseudonym, and has continued to keep his personal life private. He was an influential theorist, but never as incisive a writer as his colleagues, especially Francois Truffaut.

He continues to direct films in his 80s, and is older than many of the pioneering New Wave directors. He never deviated from a realistically detailed style that is his trademark. He continued for years to teach a cinema class at the Sorbonne, while making a film once every three years, or so. His filmmaking philosophy derives directly from his devout Catholicism. He thought cinema should reproduce the beauty of God’s world without the interference of man. His films often depict characters with established intellectual philosophies, presented with temptations forcing them to reassess their strongly held opinions. His first successful film, La Collectioneuse was released in 1967, but he had been making modest films to little acclaim since 1952.

The structure of Pauline a la Plage is circular. A car drives in through a gate at the beginning and out at the end, although the protagonists undergo formative experiences in the meanwhile. This film was part of the “Comedies and Proverbs” series that set characters in different regions of France. The geographic documentation was an important part of the style of the series. There are about half the normal number of shots, and the camera is discreet, there are no probing close ups. The camera movement is slight, and was probably at the instigation of cameraman Nestor Almedros. The actors perform in a naturalistic style, made more difficult by the vast amounts of dialogue recited in each long take.

Rohmer created a world viewed by a late 20th century teen, but it was as complex as an 18th century comedy of manners, filled with comings and goings, misunderstandings, revelations, and a collapse of moral certitude, “generating a form of licentiousness that can pose as liberty” (Crisp). Pauline, which was Rohmer’s biggest international hit, examines the adolescent border between innocence and corruption, and the inception of sin. Fifteen year old Pauline is the only character with any sense, and one hopes that does not desert her as she matures. The adult characters in the film set one bad example after another.

Rohmer’s films display his personal concern with human relationships, especially those people fluent in intellectual discourse, although here they talk mostly to make excuses for their bad behavior. Rohmer is not particularly popular in his native country, but his supremely minimalist style has won many international awards, including prizes at Cannes, Berlin and Oscar nominations. Pauline a la Plage won a Best Director award at Cannes.

His “Comedies and Proverbs” of the 1980s display his intense interest in character studies, his love of conversation, and his creativity on a low budget, the fruit of his years of 16mm filmmaking. Pauline, his third in the series, became Rohmer’s biggest American hit, in part because the advertising featured young Arielle Dombasle in a bathing suit. Half a dozen characters, in Normandy at the end of the holiday season, conduct their messy liaisons observed by 15 year old Pauline, far wiser than her years. 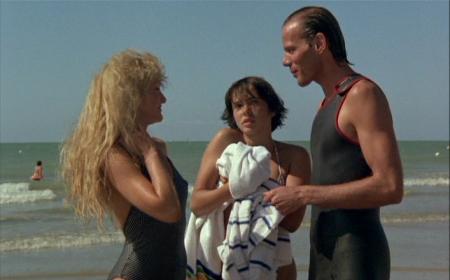