A beautiful princess runs away to escape her father’s shocking marriage proposal. Based on a 17th century tale, Demy’s candy colored homage to Cocteau’s classic Beauty and the Beast is “a primer on how to rework a literary classic into an impressively restrained movie with something fresh and intelligent to say” (Boston Globe).

“Donkey Skin” is a French fairy tale written in verse by Charles Perrault in 1697, although the film owes much to a later version from 1781. Perrault wrote his stories at the behest of some women of the court of Louis XIV, who longed for an equality that would evade arranged marriages and unwanted pregnancies (Tremper 15).  It was retold, in a somewhat sanitized fashion in Andrew Lang’s Grey Fairy Book. Although Perrault’s is the same storybook that included such classics as Cinderella, Sleeping Beauty, Puss in Boots and Little Red Riding Hood, it quickly becomes clear why this somewhat conflicted childhood fable is less familiar to American readers.  As Roger Ebert notes, a child and an adult experience two different movies (Ebert 156). Jacques Demy had a childhood love for this story, and had been working on a script for nearly a decade before filming it in 1970.   The film, with its use of Jean Marais, and some of the effects from Cocteau’s film is a clear homage. The king even woos the princess with some of Cocteau’s verse, the “poetry of the future.” Jean Marais was a friend, they had met years before.  He said, “If I was a millionaire, I’d stop working, but if I was a millionaire, I’d still make this film” (Varda). 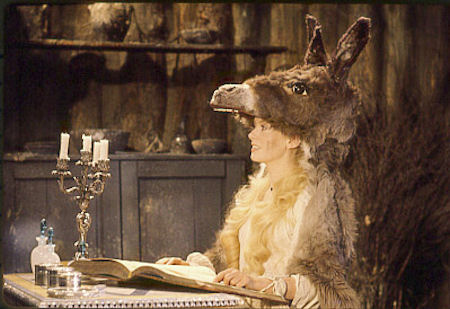 Jacques Demy was born in 1931.  His childhood was shattered by the bombings of WWII, so he created a personal refuge, detailed stage settings with puppets and marionettes. He had some 8mm movies that he viewed again and again. When he tired of them, he put the celluloid in hot water to soften the emulsion, and drew directly on the frames, animating the bombing of Nantes, his hometown.  He considered it his contribution to the Resistance.  He unenthusiastically attended trade school, while making stop motion animated films in the attic with a camera he got at age thirteen.  At a local cine club he learned to love a vast variety of movies.

He got into film school based on a home crafted animation, since he did not even have a high school diploma.  After graduation, he became an assistant to both an animator and a documentarian.  He directed several shorts, and his first feature, Lola in 1960, captivated the Cahiers du Cinema crowd and included him in the fringes of the French New Wave, with François Truffaut, Jean-Luc Godard and others.  Demy’s third film, The Umbrellas of Cherbourg was revolutionary in concept, a modern opera, imaginatively designed in bright colors (the New Wave preferred black and white) and starring the beautiful Catherine Deneuve.  The film won the grand prize at the Cannes Film Festival that year, which he and his wife, director Agnés Varda, found quite shocking.  This gave him international exposure and in 1967 he was invited to Hollywood by a Columbia Films executive.

His one Hollywood film, Model Shop, was received indifferently, he called it Model Flop.  He had tried in vain to cast a young actor named Harrison Ford, but the studio insisted that he use Gary Lockwood, who had just starred in 2001: A Space Odyssey. He was told Ford had no future in films.  His first film on his return to France was Peau D’Ane, also known as Once Upon a Time and The Magic Donkey. The settings of his films were of paramount importance.  “His magic captivated and charmed audiences, but it was his sharp, often strident colors, that revealed his true power to fascinate.  He was a precise and demanding director, he not only knew exactly what he wanted, but such a large amount of his films were acted to a playback track, everything had to be done perfectly. ” Demy’s approach was based on a desire—one that was contradictory, ambiguous, and convoluted—to ravish the viewer through enchantment” (Douchet 245). A fairy tale is ideal for this goal. 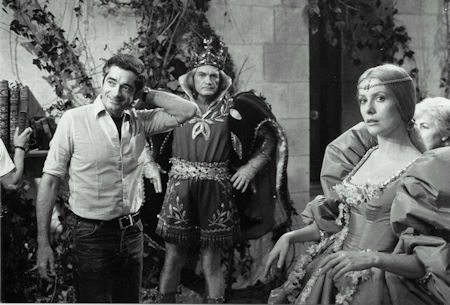 Catherine Deneuve was born Catherine Dorléac in Paris in 1943.  Her parents were both actors, and she made her screen debut at 13.  She took her mother’s maiden name, her sister, Françoise Dorléac, was also a screen actress.  Deneuve shot to stardom in the mid 60s with three films, Demy’s Umbrellas of Cherbourg, Polanski’s Repulsion and Bunuel’s Belle du Jour. Her on-screen persona positioned her in between earthy European sex goddesses like Brigitte Bardot or Sophia Loren, but different as well from more intellectual New Wave heroines like Jeanne Moreau and Anouk Aimee.  She was a cool blonde, like Grace Kelly, with whom she was often compared.  Her image was of a mysterious, enigmatic beauty, with an element of the “eternal feminine.”

She met Demy at 18, when she wasn’t sure she wanted to continue in films.  She thought The Umbrellas of Cherbourg sounded “totally original and daring, and I didn’t hesitate” (Deneuve 156).  The score, sung like an opera, had been pre-recorded, the entire film had to conform to the music, and the entire film was performed to a play-back track.  Deneuve said, “It’s a totally exceptional thing, an opera, a modern opera steeped in everyday life.  Simultaneously real and poetic” (Deneuve 157).

Deneuve made four movies with Demy, also The Young Girls of Rochefort with her sister and A Slightly Pregnant Man with Marcello Mastrioanni.  She has aged gracefully, continuing to select challenging roles, and was nominated for an Oscar for Indochine (1992). She also promotes such luxury brands as Chanel and Yves St. Laurent.  Her face was used as a model for the most recent incarnation of Marianne, the symbol of France.  In France, her films with Demy solidified her star status.  Her reluctance to share her private life with the press has cultivated an aura of mystery. She was married and divorced from photographer David Bailey, but had two children outside of marriage one with Roger Vadim and the other with Marcello Mastrioanni.

Demy had been captivated byn the story of Donkey Skin since he was a small boy.  He thought that if you asked a little girl who she wants to marry, she’ll say ‘Papa’ which is why the King’s request seems reasonable to a child, but not to an adult. He wanted to make the film from a child’s viewpoint.  He used very simple special effects, double exposures, slow motion, as an homage to La Belle et La Bête. Deneuve’s dresses were extremely heavy.  The one that looks like the weather was made out of the reflective fabric used for movie screens, so scenes could be projected on it. 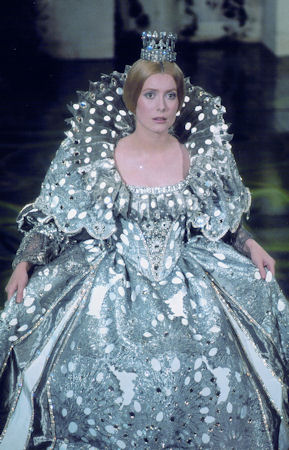 Jim Morrison visited the set, signing an autograph for Delphine Seyrig’s son.  He was a movie buff, like François Truffuat, who also visited. (Varda).  Many children adored the film, and Deneuve was often recognized by children because of it.

Peau D’Ane is a“bizarrely straightforward yet surprisingly engaging fairy tale” (Wilhem 107) combining Demy’s documentarian and cartoonist education. It was his biggest hit in France. The film begins and ends with the opening and closing of a storybook, to emphasize the timelessness, but also the conventions of storytelling.  Yet, through the sweetness, color and fantasy there lies a feeling of melancholy, and certainly the film has aspects that belie the reassuring nature of the traditional fable.

Jean Renoir once said, “The public is grateful to a director who can show how your front doorstep leads to Sleeping Beauty’s castle.” But, Demy’scolleagues in the New Wave found his interest in “art for dream’s sake” (Layde) untenable in days when the political engagement of artists was valued highly, and he fell out of favor. His later films were not well regarded, and he died at 59 of leukemia.  Jacques Demy’s eccentric musical films, extremely personal and completely unique, could not have been made by anybody else. None of his films are as otherworldly as Peau D’Ane. 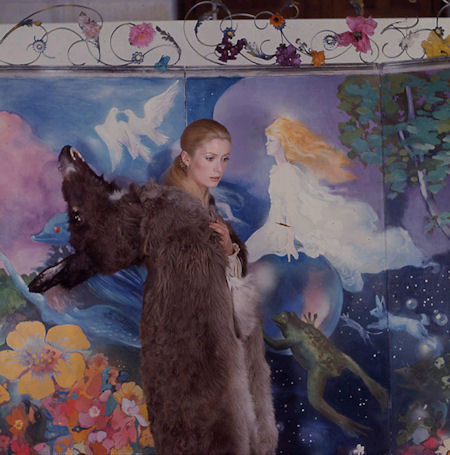 In 2014, our family took a trip to Paris. One of the things I wanted to do was see a film in an old Parisian movie palace, of which there are a few still in operation. We went to the Egyptian themed Louxor, where we saw a matinee of Peau d’Ane. There were no subtitles of course, but I’d seen it a few times, and knew the story. It was a lovely experience to be in an audience with parents sharing a favorite childhood memory with their own children. 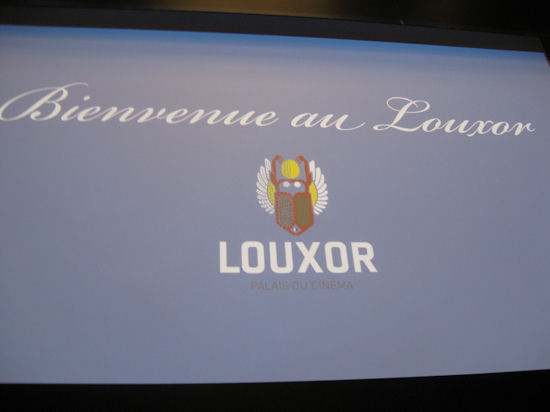 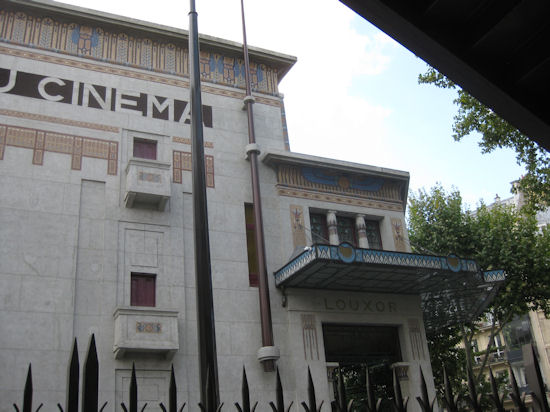 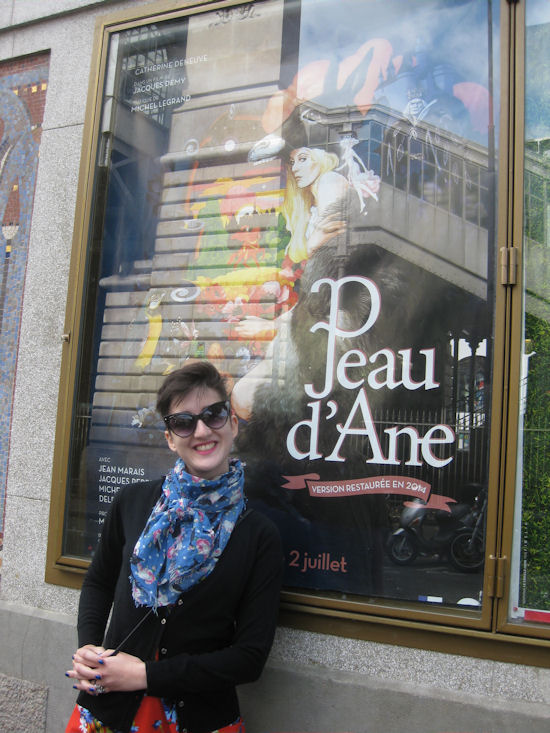 Here is Moviediva, Jr. posing by the poster.