Anne is 13 years old, living in the shadow of her older sister Frederique. They navigate the rocky shoals of school, boys and their parents’ divorce over the course of a year. Set in the exact same time frame as The World of Henry Orient, Kurys’ first, autobiographical film, takes seriously the struggle over the proper age to wear stockings in cafés, as well as the dawning consciousness of politics and rebellion. Often compared to Francois Truffaut’s 400 Blows, this film brings a distinctive female and distinctly French slant to a coming of age story. “An expert, utterly charming movie” (New York Times).

Diane Kurys directed, wrote and co-produced her debut film at 29 on a miniscule budget, yet her film, in France was the highest grossing French film of the year, and was only surpassed by Star Wars at the box office (Tarr 17). Her third film, Entre Nous, was nominated for a Best Foreign Language Film Oscar and gave her a pathway to Hollywood (which she rejected). She refused the label of “woman director” even as she was considered to be one of the most important of her generation, a list including Agnes Varda, Chantal Ackerman and Marguerite Duras. She didn’t want her work shunted off into a category separate from the male auteurs of the French New Wave. She wanted to have the same mainstream audience that male directors enjoy. Kurys in 1983 said a so-called “women’s cinema” was “negative, dangerous and reductive…women’s films are bad for films and bad for women. The term smacks of feminism, sex and schmaltz” (Tarr 8). Carrie Tarr in her book length study of the director observes, Kurys inability to see her films as the work of a ‘woman director’ does not prevent women spectators from seeing them as articulating the contradictions of a woman caught up in and in her own way resisting the hegemony of dominant representations of women in a patriarchal society” (Tarr 11). In other words, she can’t tell us what we choose to see in her film.

Kurys was born in Lyon, France, in 1948, the younger of two sisters, as you can deduce. Her parents were Russian Jews who married while imprisoned in a Vichy detention camp during WW II. They divorced in 1954, and 5 year old Kurys and her sister found themselves in the unusual position of being raised in Paris by a single mother. She was unhappy and rebellious as a teen, running away to live with her father, and also to Israel with a boyfriend, Alexandre Arcady. They embraced the revolutionary events of May, 1968 in France, refusing to marry, although they are still together as professional and personal partners.

Kurys worked for eight years as an actress (including a small part in Fellini’s Casanova, which lasts a few seconds) and frustrated with her roles, began to adapt American plays with an eye to acting in them, including Lanford Wilson’s Hotel Baltimore. She began writing a novel about her schooldays, which a friend suggested would make a good screenplay.

In an interview, Kurys said that she applied for a grant to make the film, and had to put down the name of the director. Because she didn’t have one, she wrote her own name. She also needed a producer, but could not find a lot of interest, “Oh, it’s a girl’s story” she was told, they weren’t interested. Luckily, a friend had a wealthy acquaintance who wanted to get into the movie business. She read him her script, and he agreed to be her producer. (Hyperallergic).

New to filmmaking, and, as with many debutante female directors, her cinema experience in front of, rather than behind the camera, she benefited from the help of cinematographer Philippe Rousselot. He had her look through the different lenses to see what the difference was, to help her compose her shots. “In half an hour, he basically taught me everything I needed to know.” He helped her balance the serious with the comic, and the way the younger sister, Anne, chafes against the pathway already marked for her by her sister. She filmed what she remembered. Her memories, only 15 years old, were still fresh. 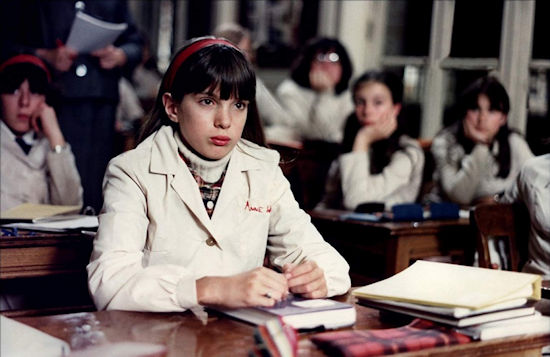 Kurys auditioned 500 girls and went back to her old school to film, but by the seventies, times had changed. There were boys at school now, and the students smoked in the hallways! She felt that the school itself was the main character in the film. Although the film is set in 1963, it is a collection of memories from 1960-65, and while Anne is the most autobiographical of the characters, Frederique, the older sister shares some of the director’s experiences, as well, so different stages of adolescence can be observed in a film that takes place in one calendar year. It is a personal film, but it also reflects the state of French society in the 1960s.

Last week I showed The World of Henry Orient, which also depicts the world, in 1964, of a 13 year old girl. The American girls have no political consciousness at all, living in their affluent private school bubble, whereas Anne’s older sister demands her school talk about the war in Algeria and nuclear proliferation, and they are both sensitive to the anti-Semitism all around them.

The girls in both films come from divorced, female-centric families. But, the French girls, while similarly obsessed with boys, without having a lot of concrete information about them, are much more matter of fact about sex. It seems that Anne’s older sister is having an intimate relationship with her boyfriend, tacitly approved by their mother. This would never happen in an American film about teen girls. Both films anticipate Lady Bird and Book Smart, with their strong female points of view. 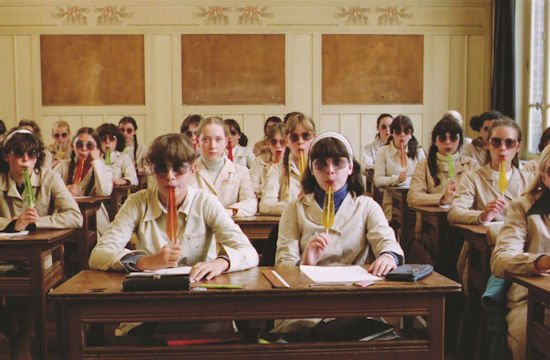 “Even when I had no idea I would go on to become an actor or a director, I spent my childhood thinking, just, ‘One day someone will know…One day I am going to tell this story.’ But not as revenge. It’s funny, but I live my life like that. Four of my movies are telling the same story: about my family, my parents, their divorce. And it comes from being very, very unhappy. The reason is because I was born into a lie, about the identity of my real father. After telling that story in For A Woman, it’s obvious that making films is my therapy” (Hyperallergic).

Barbara Quart wrote: “The film was a revelation after years of watching, apparently without gender consciousness, Truffaut’s 400 Blows, Menzel’s Closely Watched Trains, Olmi’s The Sound of Trumpets, and numerous other cherished films charting a young man’s coming of age. Peppermint Soda’s simple existence made one notice that there were next to no films about female initiation experience…unbelievably through decades of film viewing one had never consciously noticed these distinctions…one had never before seen a camera focus with this kind of attention, time, care, truth, affection and interest on young girls this way” (Tarr 7).

Kurys has continued to direct films, she has 14 director credits, including My Mother is Crazy from 2018. Judging from the trailers on the imdb, many of them reach back into her own life for inspiration. Her first film’s success was a surprise to her, as she confesses “there’s no action, no stars, no violence, no sex and no money” (Tarr 18). 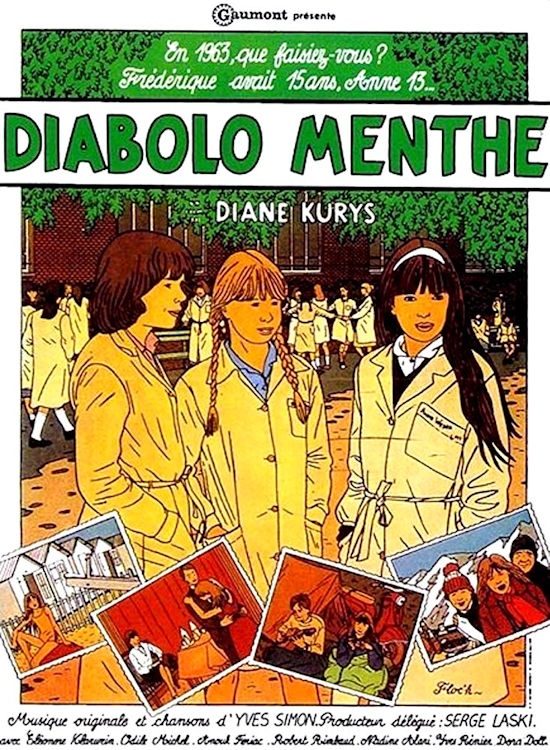