Peter Pan opened Christmas week, 1924. Then, like one of the Lost Boys, it vanished into a Never Land of its own. Paramount, like every other studio, looked on its films as disposable product. Films were as ephemeral as the daily newspaper. Why bother to keep a print? The Museum of Modern Art couldn’t find it, nor could the Cinematheque Francaise, nor any of the rabid private collectors, who could sometimes materialize copies that more legitimate sources could not. It was one of the most important of missing American films.

For the children who saw it, nothing else ever compared. William K. Everson, one of the great silent film historians, never tired of rhapsodizing Peter Pan or its glowing star, Betty Bronson (and her next film A Kiss for Cinderella). James Card, curator at Eastman House and one of the great heros of film preservation, longed to see this childhood favorite with a desperate nostalgia. It was he who, as a young man working for Kodak in Rochester, discovered a fume-filled vault of decomposing nitrate films. Nitrate films are highly flammable, can spontaneously combust and even burn under water because they supply their own oxygen. Card was terrified that if the Kodak executives found out about the stash in the Eastman Theater, used at the time mostly by the Eastman School of Music, the whole lot would be trashed as a hazard, which it certainly was. But, Card convinced Kodak to call Iris Barry, the visionary film preservationist at the Museum of Modern Art, who stressed the importance of the unique prints, accessioned them against the day there might actually be an archive at Eastman House, and saved them. This beautiful new tinted print was restored from this original nitrate print, and had a gala re-premiere at the Podenone, Italy, Silent Film Festival with an orchestral score by Philip Carli.

Peter Pan was traditionally played by a woman, partly because petite actresses were easier to lift on stage in the old flying harnesses. The play had been a huge hit with Maude Adams as Peter, which she played on and off from 1904-1913. Sir James Barrie had resisted all offers to film it, and relented only if he could select the actress personally. As a private game, Barrie wrote his own scenario, which included more fantastical effects than the finished film Many actresses tried for the part, and were rejected, including America’s Sweetheart, Mary Pickford, Gloria Swanson, and Lillian Gish. Barrie viewed all the screen tests personally, and selected a New Jersey teenager with little acting experience. Her ballet training with the Ballet Russes choreographer Michel Fokine helped her to really seem to fly. Peter Pan is more of a filmed play (and George Ali repeats his famous stage role as Nana, the dog) than an example of movie magic, remember that all special effects are done in the camera; laboratory effects were not yet invented. 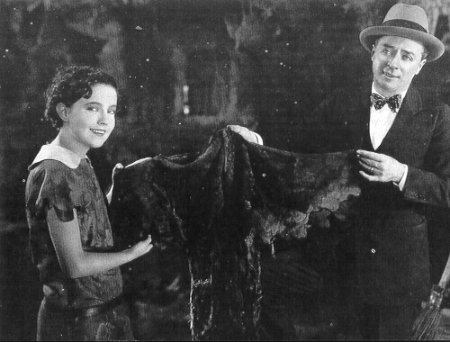 Betty Bronson on the set with her director, Herbert Brenon

Mrs. Darling is played by 23 year old Esther Ralston, appalled at being asked to play a mother of three at her age. But, director Herbert Brenon felt that every child saw their mother as a beautiful young girl. She was a show biz veteran, having toured with her family, The Seven Ralstons.” She started in pictures around 1920, and played more than 20 featured parts before Peter Pan. She co-starred with Betty Bronson in another Barrie adaptation, A Kiss for Cinderella, as well as in Old Ironsides, opposite Charles Farrell and Children of Divorce with Clara Bow and Gary Cooper. She continued acting in film and on television until the 1960s and lived until 1994. 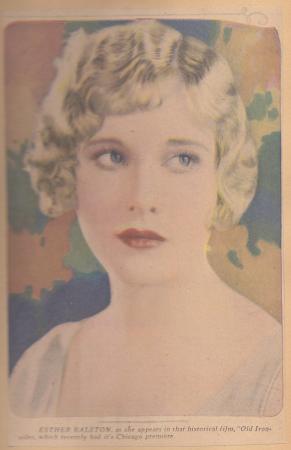 Sixteen year old Mary Brian is Wendy, the first of the sweet natured heroines she played in numerous films in the silent and early sound era. She was born in 1906, in Texas, as Louise Byrd Dantzler. Her father died accidentially when she was an infant, and her mother worked to support them both. In 1923 she was living in Long Beach, CA, with her mother and aunt, and entered a bathing beauty contest in the hope of winning the $25 prize. One of the judges was Esther Ralston, who was to play her mother in Peter Pan, and who became a lifelong friend. She didn’t win the contest, but Ralston said, “you’ve got to give the little girl something.” So, her prize was to be interviewed by director Herbert Brenon for a role in Peter Pan. Brenon was recovering from eye surgery, and she spoke with him in a dimly lit room. “He asked me a few questions, Is that your hair? Out of the blue, he said, I would like to make a test. Even to this day, I will never know why I was that lucky. They had made tests of every ingénue in the business for Wendy. He had decided he would go with an unknown. It would seem more like a fairy tale. It wouldn’t seen right if the roles were to be taken by someone they (the audience) knew or was divorced. I got the part. They put me under contract” (Slide). The studio renamed her Mary Brian. She remained active on screen regularly until 1937, and intermittently thereafter, skillfully playing a much greater variety of roles than the average young actress.

Anna May Wong is Princess Tiger Lily. She had a great year in 1924, also playing a slinky spy in Douglas Fairbanks’ monumental fantasy, The Thief of Bagdad. She was born Wong Liu Tsong, Cantonese for “Frosted Yellow Willow,” in Los Angeles’ Chinatown in 1907. Movie-struck by the Perils of Pauline serial, she broke into pictures by way of an agent who specialized in hiring Asian extras for crowd scenes. She starred in the Madam Butterfly-ish The Toll of the Sea, the first 2-color Technicolor feature, when she was only 16 years old. Shortly afterwards, Fairbanks chose her to play the Princess’ treacherous lady-in-waiting in The Thief of Bagdad. She made close to 50 films in her career, but was frustrated by Hollywood’s penchant for casting heavily made up Caucasians in Asian roles. Her other major part was in Shanghai Express where she held her own admirably opposite Marlene Dietrich.

Tinker Bell is played by Virginia Brown Faire. She was born in Brooklyn and entered a “Fame and Fortune” contest in 1919 sponsored by Motion Picture Classic Magazine. She was too young, still under 16, to sign her prize Universal Studios contract. She started in 2-reel Westerns and made about 40 silent films, Peter Pan, and The Temptress with Greta Garbo probably the most well known. There isn’t really much of her in Peter Pan, but not because cinematographer James Wong Howe didn’t try. She remembered J.M. Barrie insisting, “No close-ups, because it would spoil the illusion” (Slide). She remained close to both Mary Brian and Esther Ralston until her death in 1980.

Philippe De Lacy played Michael. He was born in Nancy, France, in 1917, his father already a victim of the Great War. His mother died two days after he was born, and he was discovered in a shell hole by a Red Cross nurse who adopted him and brought him to Los Angeles. Invited to the set of a Geraldine Farrar film, his delicate features were his entrée into a movie career. He was in many major films, playing Mary Pickford’s brother in Rosita, Neil Hamilton as a child in Beau Geste, John Barrymore as a child in Don Juan, and with directors like F.W. Murnau, Ernst Lubitsch and John Ford. His film career over by 1930, he worked in newsreel production and advertising. No newspaper carried his obituary when he died in 1995.

Capt. Hook, Ernest Torrence, is best remembered today as the brute who tried to kill Richard Barthlemess in Tol’able David and as Buster Keaton’s frustrated dad in Steamboat Bill, Jr. 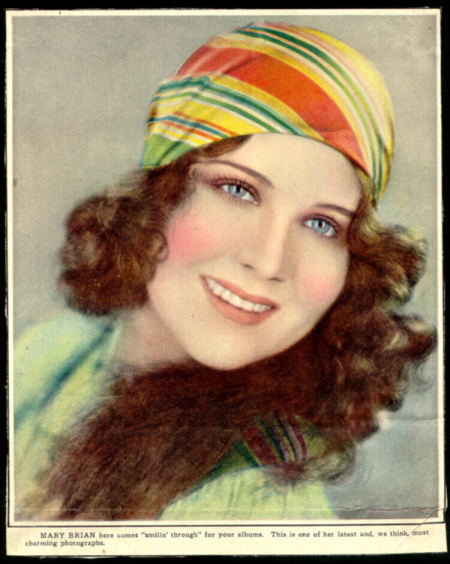 Peter Pan is an excellent film to introduce children to the magic of silent cinema. Often in modern films, kids can’t understand the quickly spoken dialogue, but they are acutely sensitive to the emotions on the actors’ faces. Since they probably know the story already, it’s easy to follow the action and make up the words, and let the music carry them along. At a screening at the North Carolina Museum of Art, an audience of parents and kids were rapt, and there was not a single walk out, even for kids as young as three. The atmospheric score was by maestro David Drazin. Peter Pan is everything a tale of enchantment should be, hilarious, moving and adventurous.

And don’t forget to clap when Peter asks you if you believe in fairies.

(On set photo of Bronson and Brenon from the December, 1974 Films in Review career article on Bronson, photo of Mary Brian from Marjorie E. Glas’ c. 1930 Movie Star Album, Esther Ralston from 1928 Chicago Tribune scrapbook. Sources include Silent Players by Anthony Slide. The David Drazin website has quotes, a list of scores and soundclips.)