A pickpocket accidentally extracts some military secrets from a purse on the subway, and tries to grease his way in between a gorgeous dame, the FBI and the Commies in this summer sweaty Cold War noir.

Sam Fuller had a colorful life before he ever started making movies. As a teenaged copy boy, he longed for the life of a crime reporter and at 17 got his wish, during the heyday of Park Row, home to the NYC metropolitan dailies in the Roaring Twenties. He did a bit of Hollywood scriptwriting before enlisting in the infantry in WWII. Eschewing every opportunity for a cushy posting, his unit, the Big Red One, invaded Africa, Sicily, and finally Europe, where he managed to survive D-Day and the Battle of the Bulge from the front lines. Later he liberated a concentration camp, making his first 16mm home movie, 20 minutes of footage from Falkenau. It’s no wonder his films have an eyeball searing frankness about them. But, if the violence in Pickup is raw, the film also finds tenderness in surprising places.

“All over the world, you’ll find small-time crooks like Skip, Candy and Moe living on the underbelly of society, struggling to survive with their scams, abiding by their own unwritten code of ethics. I’d seen plenty of these people firsthand when I was a crime reporter. They are individualists, trusting no one, beyond politics, changes in governments, intellectual labels and fashion” (Fuller).

The story of Pickup was ripped from the headlines, as Fuller’s old tabloid employers might have said. The espionage cases of Klaus Fuchs and Alger Hiss were in the news, and the public was antsy about the sale of military secrets to America’s sworn enemy, the Russian Communists. “By alluding to those cases, I wanted to take a poke at the idiocy of the cold war climate of the fifties. Sure, there were communists who believed fervently in Marx and Lenin. But, there were also crumbs…who’d go to work for any ‘ism’ if there was a payoff. People living on the edge of society don’t give a damn about politics. I wanted my film to be told through the eyes of the powerless. Cold war paranoia? Hell, these crooks were more interested in just getting by” (Fuller).

Producer Darryl Zanuck, whom Fuller greatly admired, worried about the low life protagonists in this script. “What kind of characters have you got here? You’ve got to have a ‘nice’ boy and girl subplot in it,” but Fuller was unmoved. (Battleground)

Fuller had wanted to call the film simply Pickpocket, but the studio hated the title. Cannon, slang for the same profession, sounded like a war film, so the title alluded to a New York street where as a boy Fuller had once sold newspapers. For research, he interviewed NYPD cop Dan Campion, who was an expert on pickpocket crimes. He knew every cannon in town, and when he was ready to arrest them, he was a tough character. In fact, when Fuller interviewed him he had just been suspended for his rough treatment of a suspect.

An admirer of the Italian neo-realistic directors, Fuller envied them the ability to film on real-life mean city streets. Pickup was filmed in downtown LA, but mostly on the Fox back lot, gritty décor courtesy of production designer Lyle Wheeler. Widmark’s Skip lives in a waterfront shack, designed as Fuller remembered them, complete with the river-cooled beer stash.

Richard Widmark was born in Minnesota, and spent his childhood in the upper midwest. As a kid, he loved the movies, particularly cowboy Tom Mix and Boris Karloff. He was thinking of studying law, but was sidetracked into drama at college. He started on stage in 1938, and worked through the WWII, 4-F for a punctured eardrum. He tested for a part in Henry Hathway’s Kiss of Death (1947) stealing the picture from star Victor Mature and winning an Oscar for his first film role, a giggling sociopath who murders an old lady in a wheelchair by shoving her down the stairs. He’s had a long career playing loners on both sides of the law. 91 years old, and married for over 50 years; he is baseball great Sandy Koufax’s father in law! Fuller said, “The only actor I ever had in mind to play my lead was Richard Widmark, who was under contract at Fox then. A born individualist, Widmark had a strange face, with the twisted, arrogant smile, that didn’t fit into anybody’s scheme of Hollywood handsomeness” (Fuller). “He was perfect. He could be a heavy, he cold be the lead. He could go either way (Fuller). Widmark was a pretty big star at the time, and decided to throw his weight around by challenging the director. But Fuller didn’t brook any nonsense, and put the rebellious actor in his place. 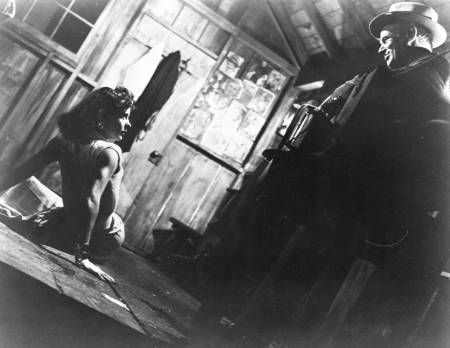 There were a lot of actresses who wanted to play the part of Candy, including Shelly Winters, Betty Grable and Ava Gardner. All were wrong as far as Fuller was concerned, who saw Candy as “not sexy enough to be a hooker, not smart enough to be a housewife.” Marilyn Monroe lobbyied Fuller personally, but he felt her sensuality would overwhelm the rest of his picture. He didn’t want Jean Peters, a former Miss Ohio State, either, hating her hokey histrionics in her first film, an adventure film about Cotez’ invasion of Mexico, Captain from Castille. She’d just played Marlon Brando’s wife in Elia Kazan’s Viva Zapata, though, and Fuller like her slightly bowed legs, which he thought looked like a streetwalker’s. She read a scene, and he decided she was smart and assertive, and when she insisted on rehearsal time so she could hold her ground with Widmark and Ritter, Fuller came in early to work with her for 4 hours before shooting started at 10:00 am.

Every day, Peters would be delivered in a huge car to the set, and the driver always waited for her, and watched the rehearsals and the filming. At night, she got into the front seat, and they drove away. It was pretty obvious the driver was her boyfriend, but Fuller had no idea who he was, until one of the secretaries told him it was Howard Hughes. Their romance was a secret at the time, but he eventually married her. Peter’s movie career lasted only between 1947-55. She and Hughes were divorced in 1971. 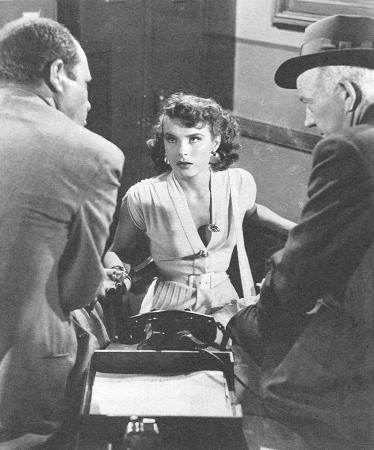 Thelma Ritter plays Moe, the informer, and she won one of her six Oscar nominations, and six Oscar losses (in 12 years) for the role. She lost to Donna Reed for From Here to Eternity. A Brooklyn born character actress, she often played a variation of the wise-cracking housekeeper/maid/sidekick role, but her poignant Moe is different from many of her more run of the mill parts. Fuller wanted her favorite song to be the ballad “Mam’zelle.” When Fuller went to see the head of Fox’s music department to see how he could get the overseas rights to the film, Alfred Newman laughed at him. Written by director Edmund Goulding for the Fox film, The Razor’s Edge, they already owned the rights. He took care with the little parts, too. Lightening Louie is played by magician Vic Perry, it was his only screen role.

“One of the movie’s themes is about rushing to judgment. Skip doesn’t condemn Moe when she sells information on him to the police. She’s got to earn a buck. Moe reserves judgment on Candy, despite her questionable past. Candy doesn’t look down on Skip for picking pockets to make a living. Nobody in this milieu is quick to judge others, because everyone is struggling to survive” (Fuller).

FBI director J. Edgar Hoover did not like the movie, and demanded a meeting with Fuller. He was upset with Skip’s “Who cares?” attitude. “Doesn’t the United States mean anything to you?” he asked the director. “What kind of thing is that for an American to say?” “That’s his character, that’s not ME,” insisted Fuller. “But, how can an American think of money at a time like this,” Hoover wondered trying to get Fox to withdraw the film voluntarily. Zanuck told him flatly, “Mr. Hoover, you don’t know movies,” and the FBI director didn’t have the power to quash Pickup’s release. (Fuller).

The film was invited to the 1953 Venice Film Festival, where it won a Bronze Lion. Interestingly, when the film was shown, the subtitles eliminated all mention of the communists, substituting, spy, traitor or murderer, and changing the meaning of the film significantly. The president of the jury that year was Luchino Visconti, a director that Fuller much admired. In fact, Visconti, a communist, had opposed the award, but was overruled by the rest of the jury. There was no Grand Prize awarded that year, but Silver Lions were awarded to six films, including Fellini’s I Vitelloni, Ugetsu Monogatari and John Huston’s Moulin Rouge. Three other films won Bronze Lions. No film’s win was protested as vehemently as the one for Pickup. The jury also completely ignored William Wyler’s Roman Holiday, they thought the film to be a trifle that was beneath the dignity of the festival.

“I think that if you don’t like the films of Sam Fuller, then you just don’t like cinema. Or, at least you don’t understand it. Sure, Sam’s movies are blunt, pulpy, occasionally crude, lacking any sense of delicacy or subtlety. But those aren’t shortcomings. They’re simply reflections of his temperament, his journalistic training and his sense of urgency…There’s a great deal of sophistication in Sam’s movies, but it’s all at the service of rendering emotion. When you appreciate a Fuller film, what you’re responding to is cinema at its very essence. Motion as emotion. Sam’s pictures move convulsively, violently. Just like life when it’s being lived with real passion” (Martin Scorsese’s introduction to Fuller’s autobiography).