Rapacious Max Bialystock and his nervous bookeeper Leo Bloom hit on a larcenous investment scheme in which they clean up by producing a Broadway play that simply MUST fail. Luckily, they find “Springtime for Hitler.” The origin of the phrase “creative accounting” (really!) “This is one of the funniest movies ever made…like a bomb going off inside the audience’s sense of propriety.” (Roger Ebert)

Mel Brooks began as a tv writer for the variety hour, Your Show of Shows, starring Sid Caesar. Brooks was one of the legendary team writing comedy for Caesar, including Woody Allen, Neil Simon, Larry Gelbart, Selma Diamond and Carl Reiner. Reiner later used this experience in creating The Dick Van Dyke Show. These children of Jewish immigrants all grew up in New York in the 1930s. They wrote character, not gag-centered sketches, showcasing Caesar’s remarkable talent for mimicry. Reiner recalled head writer Mel Tolkin cheering them on with, “Gentlemen…we’ve got to get something done! Jews all over America will be watching on Saturday night!” The show continued for five seasons (a 90 minute live show, 39 weeks a year) but unfortunately Caesar was a raging alcoholic. He once punched a horse that had thrown his wife, an incident Brooks would recreate in Blazing Saddles.

After cancellation, Brooks fished around for the proper use of his anarchic comic talents. He made a best-selling comedy album with Carl Reiner, in which Reiner interviewed him as the 2,000 Year Old Man, riffing in a Yiddish accent on history and offering versions of traditional Jewish wisecracks, “I have over 42,000 children, and not one comes to visit me.” Brooks’ first version of the work he called Springtime for Hitler was a novel. But, as dialogue cascaded out of him, he decided a screenplay was a more logical development. In many ways, it was an expansion of the sketches he had been writing for Caesar, who loved playing characters with expansive accents like the unreconstructed Nazi playwright, Franz Liebkind.

This outrageous film, and Brooks’ parodies, Blazing Saddles, Young Frankenstein and High Anxiety are a starting point for the bad taste comedies which dominate screens today, although they cross a line over which Brooks would never have dared. Yet, society’s sense of what is improper has flip-flopped over the years. Watching The Producers now, the most offensive stereotypes are that of the dim-witted, buxom secretary and the flouncy director Roger De Bris, perfectly acceptable comic fodder in 1968. But at the time, one of the most shocking aspects was that overtly Jewish humor came out of the closet for the first time since the vaudeville era. 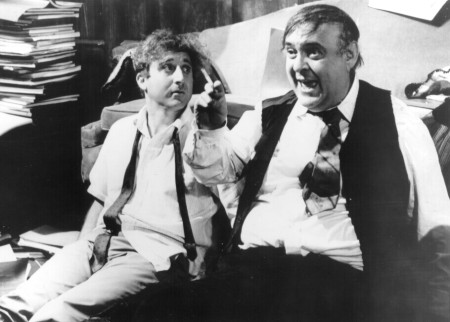 Just as “urban” is now a coded phrase for “Black” in the entertainment world, so it was once a coded phrase for “Jewish.” Although the “J” word is never mentioned in The Producers, Jewish actors played Jewish characters, (Zero Mostel had been a sensation on stage as Tevye in Fiddler on the Roof) and the central 20th century Jewish tragedy is used for comedy. Of course, making the enemy appear ridiculous is often the only way a powerless minority can rebel against the oppressors, a Jewish strategy over the ages. J. Hoberman writes, “Unstinting in its comic aggression, The Producers gave the sense—not altogether uncommon in the 1960s—of putting something on the screen for the first time.” The film was not a success when it was first released, and had mostly negative reviews, many offering a version of, “only people in New York and Los Angeles will think this film is funny,” meaning, “only the Jews will laugh.” Actor Peter Sellers (himself Jewish) was instrumental in getting the film widely released when he took out full page ads in Daily Variety and the New York Times which read in part, “Those of us who have seen this film and understand it have experienced a phenomenon which occurs only once in a lifetime.” It is a sweet victory for Brooks, and for comedy in general, that he made everybody laugh. The Producers is a comedy classic, and Brooks’ askew world view is now Tony award winning family entertainment.