Stunning movie star charisma, epic 1960s cool, and magnificent landscape combine when a laconic soldier of fortune (Marvin) enlists the help of a flamboyant explosives expert (Lancaster) to rescue a kidnapped bride (va va voomy Cardinale). The action never flags in one of the last old school Westerns (and a personal favorite).

The Professionals is based on the Frank O’Rourke novel, A Mule for the Marquesa. Rather than the usual cowboy and Indians setting, the story takes place at the end of the frontier, in 1917, with the background of the Mexican Revolution. As in the film, there is no romance, and the book (written in 1964) reflects changing social attitudes, “These men were innocent of prejudice, not because they were morally pure, or because prejudice did not exist in their world, but they lived in and with the peoples of that world in a natural way, so intent on the spending of their lives under any and all conditions that they had no time for the useless idiocy of weighing the comparative value of one man’s skin against another’s on the bigot’s scale. They lived with people, not beside them” (O’Rourke, 38). 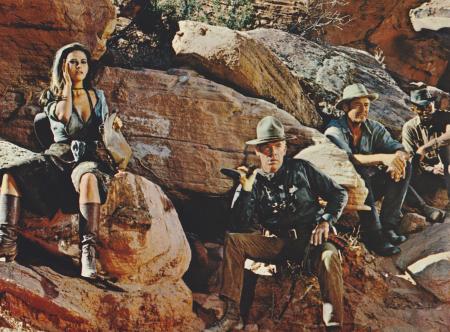 Like other novels of the genre, there is emphasis on plot at the expense of character and descriptions fetishize cowboy paraphernalia: there is much packing and repacking of gear. The book lacks the witty dialogue that makes the film so engaging, and while the book provides a blueprint for the plot, the imagination and skill of writer-director Richard Brooks can best be admired while contrasting the original with the adaptation. “The leading characters are not cardboard heroes, but complex individuals. The action sequences are exciting, and violent for their day, but the dialogue scenes are equally captivating with their wry humor and first rate acting…not always a given in Westerns. And, it’s a relatively faithful reflection of the novel, while deepening the characters and conflicts…this must rank as one of the truly excellent adaptations” (Hitt 239). 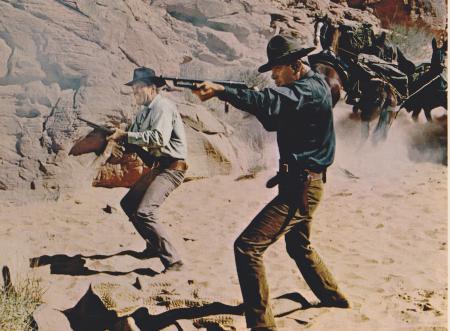 One of the most popular of the 1960s Westerns, The Professionals was extremely profitable, a sleeper hit. One of the reasons had to do with the relaxation of the Production Code. This was the first Western to feature nudity (although tame by modern standards) and a more extreme kind of violence, although it pales next to later Westerns like The Wild Bunch (1969) that would forever rejigger expectations for “realistic” violence in the genre. Conrad Hall provided the gorgeous wide-screen cinematography, filmed on location in Death Valley National Monument in California and Valley of Fire State Park in Nevada, and on a rail spur, owned by the Kaiser Steel Company, near Indio, California. The Death Valley locations used for the mercenaries to rig with dynamite in order to make their escape were used by NASA as training for the astronauts, replicating their concept of the surface of the moon.

Lee Marvin was born in New York City. A rebellious student, he was kicked out of many schools, and ended up enlisting in the Marines in WW II. He was wounded in the battle of Saipan in the Philippines; his sciatic nerve was severed. Considered disabled, he was working as a plumber’s assistant after the war, he was fixing a toilet in a theater when asked to replace an ailing bit actor in a summer stock rehearsal and was smitten by a love for acting. He played swaggering and thuggish villains in films like Fritz Lang’s The Big Heat, The Wild One with Marlon Brando in and John Ford’s The Man Who Shot Liberty Valance. The Professionals was made at the peak of Lee Marvin’s career. He had just won an Oscar for the Western spoof Cat Ballou, and the next film he would make was The Dirty Dozen. In 1967, Lee Marvin was the #1 movie star in America. His stoic anti-heroes really spoke to 1960s audiences, and he would play variations on this part throughout the rest of his film career. He made legal headlines in 1979, when an ex-live-in girlfriend sued him for “palimony” before his death from a heart attack in 1987.

During the “palimony” trial, part of Marvin’s testimony included his preparation for his role in The Professionals (since Michele Triola insisted she had aided him in this task). “It would be difficult to break down the hours. I read a lot of books and photographs, history-type things from the …Mexican border campaigns. And primarily, I would also do a lot of thinking. I would sit by myself or look at the beach, or whatever you do, as I would visualize my part, my duty, my relationship to the other characters in the story. On and off, all day long. I would read, I would think, I would be diverted on occasion. But, it would inject itself no matter what I was thinking, you know, getting it tighter and tighter in my head as to who I was…” (Marvin 235). 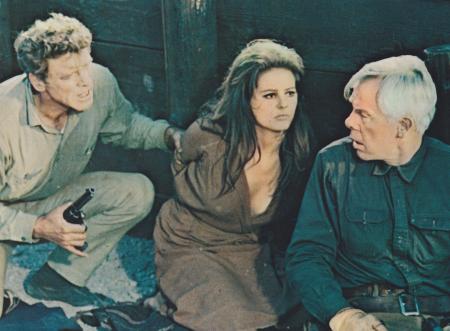 Marvin took, not only his characterization, but his costuming quite seriously. In Seven Men From Now, he played a thrillingly sexy villain, with the odd trademark of a flamboyant green silk scarf, which he chose himself to enhance his screen appearance. Richard Schickel observed in his Life Magazine review of this film, “Mr. Marvin generously shared credit for his 1965 Oscar win with the hilarious horse he rode to glory in Cat Ballou. If he gets any award for The Professionals, he may have to share it with a U. S. Army campaign hat circa 1915, which he dug up somewhere and which at a glance limns his character fare better than he could in a thousand words.”

Burt Lancaster grew up in a tough New York City neighborhood, and briefly attended NYU on an athletic scholarship. He quit college to form a circus acrobatic team with his childhood pal, Nick Cravat. After service in WWII, he appeared on the Broadway stage for three weeks, was discovered by a film scout and became a star with his first film, The Killers, in 1946. He was one of the first actors to start his own independent production company. He did all his own stuntwork in The Professionals, still a fit 53 years old. His easy-going grin and way with a stick of dynamite almost steals the show. 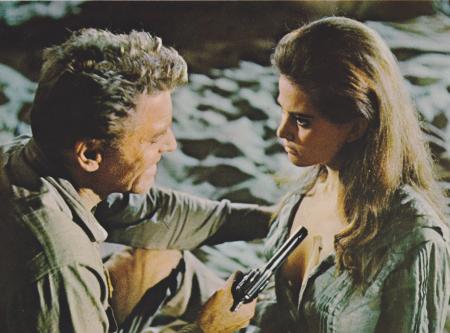 Jack Palance is the third of the three Oscar winning actors in this film. He was the son of a coal miner, who attended UNC! He worked briefly as a professional boxer then enlisted in WWII. He piloted a bomber that crashed, and he endured severe burns and extensive plastic surgery. He worked on the stage and then arrived in Hollywood, making a memorable debut in Elia Kazan’s Panic in the Streets, where he played a gangster carrying the plague. He was Oscar-nominated twice before winning for the Billy Crystal comedy City Slickers. His appearance on stage accepting his award and performing one-handed push ups created one of the most famous Oscar moments. 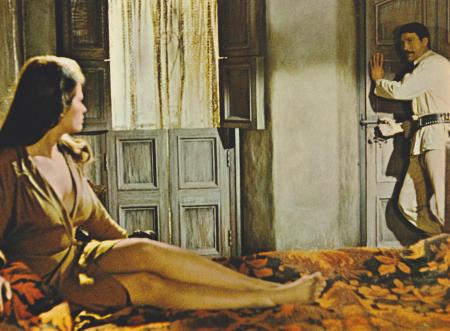 Woody Strode was a former athlete, who playing football in Canada, and worked as a professional wrestler. Often used decoratively for his muscular physique, he began to get better roles after playing a soldier on trial for rape and murder in John Ford’s Sergeant Rutledge, and as a gladiator in Spartacus. Remarkably, his race is not an issue in this film, he’s just a skilled member of the team.

There are also two classic Hollywood faces. Ralph Bellamy had a long career; his first film was The Secret Six with Jean Harlow; his last role was in Pretty Woman with Julia Roberts. In the 30s and 40s he often played “the other man” in screwball comedies like The Awful Truth and His Girl Friday. Robert Ryan played many his best roles in 40s and 50s film noirs. He entered films after 4 years as a college boxing champion, a stint during WW II in the Marines and study with the Max Reinhardt school in Hollywood. He also co-starred in Sam Peckinpah’s The Wild Bunch (1969) the Western that changed Westerns forever.

Claudia Cardinale was a beauty contest winner groomed by an Italian producer to take the place of Sophia Loren, who had moved on to Hollywood. Cardinale became famous in films like Fellini’s 8 ½. Here, she takes a stab at American stardom, like many an internationally famous actress before her, her talents, other than her physical attributes, are decidedly underused. Cardinale was used extensively in the publicity of the film, although her screen time is relative minimal. She does, however, sport a rustic burlap wrap-around robe with the best uplift in the history of cinema. 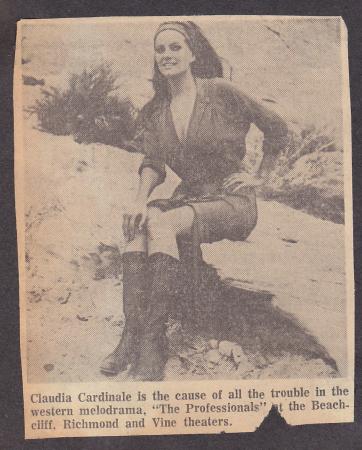 Here is Miss Cardinale in her burlap robe and 1960s headband.

The location shoots were an ordeal of rain, snow, sleet, desert sun and flash flood. Lee Marvin was also drinking heavily, in part because he was being harassed on the location by his uninvited ex. Lancaster’s biographer was told, “Marvin was so drunk during one scene with Lancaster on a rock 25 feet in the air—‘stoned!’ said Tom Shaw, assistant director on the film, ‘I don’t think he could tell you his name’—that Shaw had to intervene after forty minutes and three takes for fear the sober, furious star (Lancaster) would ‘take Lee Marvin by the ass and throw him off that mountain’” (Buford 242).

The Professionals appropriates some of the dramatic conventions of the caper film, that oh-so-60s genre, in the attention spent to team recruitment and their special skills. It also subverts two Western conventions. Although there is a few too many chuckling banditos, the two major Hispanic characters, Raza and Maria, (although not played by Hispanic actors) challenge stereotypes, like the others, a believable mix of good and bad character traits. If Raza is considered overdone, perhaps it is more from Palance’s spirited acting style than the way the character is delineated. And, the film’s two women, Maria and Chicquita, do not conform to the Western dichotomy of females being either schoolmarms or dance hall girls. Maria is not just the adventure’s McGuffin, if you will (Alfred Hitchcock’s term for a plot motivator) but changes the nature of the heroes’ quest.

The Professionals is “a tightly written, pulse pounding adventure which can be admired for its literacy, exquisite cinematography, exciting action sequences and aura of fun” (Lentz 108). It was Oscar nominated for direction, screenplay and cinematography, losing in all categories to the prestige film, A Man for All Seasons. It was one of the second top grossing Western of the year (when such statistics mattered) after Nevada Smith, with Steve McQueen.

Some contemporary critics found the film just an action movie, others felt there was too much talk and too little action. Later scholars have celebrated the confluence of them both, as I must have, when this became my favorite film as a teenager. “The ending, hopeful and romantic as it may be, demonstrates that personal growth is always possible, that talk is not necessarily cheap, and that idealism can be recovered even after it seems irretrievably lost” (Howe 210).

Set during the Mexican Revolution, it reflects the unease at home, at a time when thousands of American soldiers were dying in Viet Nam. “Maybe there is only one revolution, the good guys against the bad guys,” reflects Burt Lancaster’s Bill Dolworth. The question is, “who are the good guys?” 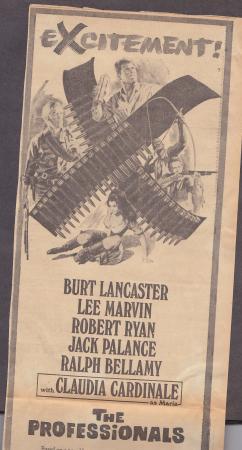 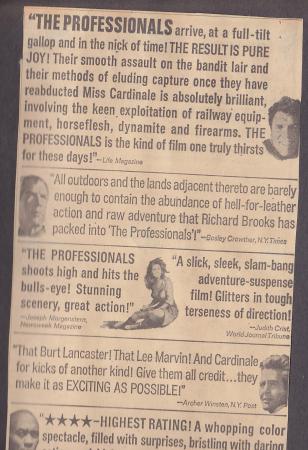 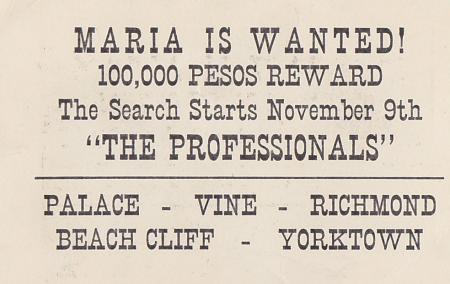 This promotional card was handed out at the theater.

(All images from Moviediva’s personal collection. Color stills courtesy of the manager of the Richmond Theater on Mayfield Road, Lyndhurst Ohio, now long defunct. Other images from my 1960s movie star scrapbook. Lee Marvin: His Films and Career by Robert J. Lentz, The American West from Fiction (1823-1976) into Film (1909-1986) by Jim Hitt, Stagecoach to Tombstone by Howard Hughes, The Film Encyclopedia by Ephraim Katz, Burt Lancaster: An American Life by Kate Buford, Lee: A Memoir by Pamela Marvin, “Almost Angels, Almost Feminists” by Winona Howe in Hollywood’s West: The American Frontier in Film, Television and History, edited by Peter C. Rollins and John E. O’Connor, The Professionals (A Mule for the Marquesa) by Frank O’Rourke.