A $10,000 insurance windfall inspires Mama Younger to move her family from their Chicago ghetto home to the suburbs. But her son, Walter Lee, hopes to use the money to invest in a liquor store, and her daughter, Beneatha, needs funds to attend medical school. Set at the beginning of the Civil Rights era, this film brought the everyday aspirations of African Americans to the screen for the first time.

A Raisin in the Sun was originally a play written by Lorraine Hansberry. She was born May 19, 1930, in Chicago, where her father was a prominent real-estate broker and political activist who successfully challenged the segregated city’s restrictive real estate covenants. These laws denied equal housing to blacks, but Mr. Hansberry illegally moved his family to a white neighborhood and then successfully challenged the laws all the way to the Supreme Court. The Court stuck down the covenants in Hansberry v. Lee, 1943. By the early 1950s, she was writing essays and reviews for leftist journals and was one of an avant-garde circle of black intellectuals. In 1953, she married a Jewish writer and activist, Robert Nemiroff, whom she met on a picket line. At 26, disgusted with the stereotyped portrayals of blacks on stage, she wrote A Raisin in the Sun, produced in 1959. It was the first play by a black woman produced on Broadway, and Hansberry was the first black author to win the New York Drama Critics’ Circle Award, defeating fellow nominees Eugene O’Neill, Archibald MacLeish and Tennessee Williams. Hansberry, erudite and outspoken, wrote only two complete plays before her career was tragically cut short when she died of cancer at 34.

The title of Hansberry’s play is taken from a Langston Hughes poem, called “Harlem” in which the poet asks, “What happens to a dream deferred?/ does it dry up/ like a raisin in the sun?” In one critic’s words, Hansberry wanted “to write a social drama about blacks that was good art” (npr.org). Because the project was considered risky, investors were scarce, but idealistic record executive Philip Rose was willing to take a chance and produce the play. He knew he had an asset in the star power of his friend, Sidney Poitier, Hollywood’s first black leading man, whom he first met after the actor’s phenomenal success as a young juvenile delinquent in Blackboard Jungle (1955). Rose, who owned a rhythm and blues label, Glory Records, asked Poitier to record a spoken word album, Poetry of the Negro, with liner notes written by the then unknown Hansberry.

Hansberry’s play was directed by Lloyd Richards, the first African American to direct a Broadway play, and it ran for 538 performances. The audience reaction during out-of-town previews had been disappointing, and the enthusiastic reception in New York came as a surprise. “It was an electric night” Poitier remembered, “The most electric night I spent in the theater” (Goudsouzian). The play had no precedent. For the first time, black audiences came to Broadway to see a play about themselves. White audiences came as well, for a new theatrical experience, one critic noted, “The intimacy of knowledge which the Negro may culturally have of white Americans does not exist in the reverse.” (npr.org). The black press adored the play and Martin Luther King, Jr., praised Mama Younger during a sermon on Mother’s Day. Hansberry dealt with revolutionary topics such as the matriarchal configuration of many black homes and the chronic identity problems faced by African-American males. A Raisin in the Sun did nothing less than expose white Americans to the reality of racial integration, attempting to defuse a controversial subject by depicting characters whose humanity was recognizable to everyone.

While Hansberry envisioned Walter Lee’s (Poitier’s character) as subordinate to his mother, Mama Younger, Poitier identified strongly with his character and pushed Walter Lee’s anguish to the center of the stage. He felt Mama Younger would survive, but the son’s ability to cope was questionable, and therefore the drama hinged on the audience’s sympathy with Walter Lee’s desire to steer the family towards new opportunities, not merely pleasanter surroundings.

Sidney Poitier’s dignified portrayals of black men created a new prototype—or stereotype—“a model integrationist hero in an integrationist age, for whites, educated and intelligent, for blacks, sharp and in control” (Lupak). He was born on tiny Cat Island in the Caribbean, into a closed society without any white authority figures. Economic opportunities were scarce and he migrated to the US when he was a teenager, quickly finding that his natural self-possession was a handicap in a racist society. Working odd jobs, often as a restaurant dishwasher, he casually applied to a theater group looking for Negro actors, and soon the introspective Poitier realized he had found his niche. From his first onscreen appearance in No Way Out (1950) as a doctor treating a racist criminal, he refused to pander to the caricatures of African Americans that had largely dominated American films since the beginning of the silent era. Poitier’s refined and reconfigured West Indian speech held no trace of the linguistic elements that had confined African American actors to subordinate parts. Donald Bogle wrote, “He was handsome. He stood straight, spoke well, and never trod on anyone’s toes. He was a man who could be reasoned with.” Because there were no black artists behind the camera in Hollywood, the early post World War II idealistic integrationist films in which he achieved stardom were shaped by white liberals.

The 1961 film version of A Raisin in the Sun reassembled the stage cast, with leading actors Claudia McNeil, Ruby Dee and Diana Sands as well as Poitier. The play’s black director was replaced by Columbia Pictures with a white one, but Hansberry wrote the screenplay adaptation of her own work, saying, “Nobody’s going to turn this thing into a minstrel show” (Goudsouzian). Hansberry originally toughened the play’s script, adding scenes that emphasized the hopelessness of the ghetto environment, for example, one in which Mama Younger’s is overcharged while shopping at an inner-city supermarket and one that shows Walter Lee seeking advice from a white store owner about opening his own business and misinterpreting the businessman’s personal frustrations as racism. Columbia rejected this material, as well as eliminating black slang like “bread” for “money,” saying that additional polarizing issues lessened the white audience’s sympathy for the Younger family. The studio was cautious, because bringing the play to the screen was a financial risk, since there would be no bookings, and no revenue, from the South.

Both the play and later the film version of A Raisin in the Sun came at a critical time for black Americans. “In 1960, Negroes were quietly asking for their rights. By 1969, blacks were demanding them. The decade moved from the traditional goal of cultural and academic assimilation to one of almost absolute separatism and the evolution of a black cultural aesthetic” (Bogle). Some critics viewed the play as a “soap opera made successful by American’s collective guilt over the Negro Question” (Mapp). But Hansberry’s goal was to write about “honest to God, believable, many-sided people who happen to be Negroes” (Leab).

The play touched on universal themes: “marital and generational discord, conformity vs. respect for diversity, struggle for women’s rights, idealism vs. cynicism, dangers of misdirected ambition and religion vs. atheistic humanism” (Stevens). Mama Younger rules her family with a potent form of passive aggressive love, smothering her family with her affection, but perhaps failing to teach them how to make independent decisions, precipitating a family crisis. Issues of self-improvement, education, Afro-centrism, parenting, and intra-family bullying releases, in turn, each family member’s bottled up rage. The themes in A Raisin in the Sun still resonate, as black Americans continue to search for a middle ground between African heritage and slave-descendant personal histories, and to decide how much to either “assimilate” or to reject the values of white society.

In his autobiography, Producer Philip Rose wrote of Hansberry, “she was brilliant, perceptive, incredibly articulate, well-informed in the literature of the theater, and certainly freely expressive of her very strong opinions” (npr.org). Both the stage and screen versions of A Raisin in the Sun were turning points in the way African Americans were portrayed: they appeared, for the first time, as three-dimensional human beings. 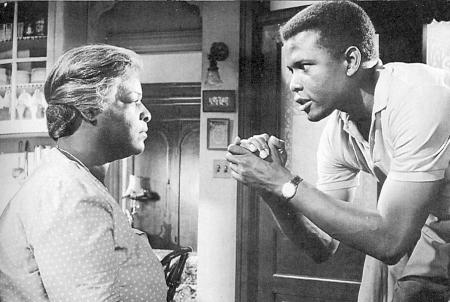 (Photo from This Life by Sidney Poitier. Other sources include: Sidney Poitier: Man, Actor, Icon by Aram Goudsouzian, Toms, Coons, Mulattoes, Mammies and Bucks by Donald Bogle, The Measure of a Man by Sidney Poitier, From Sambo to Superstud: The Black Experience in Motion Pictures by Daniel J. Leab, Literary Adaptations in Black American Cinema by Barbara Tepa Lupak, Afro-American Writers after 1955 by Carter Stevens, Blacks in American Films—Yesterday and Today by Edward Mapp, www.npr.org “Present at the Creation-A Raisin in the Sun.”