A torch singer flees the urban jungle for a backwoods nightclub (and bowling alley!) but finds that psychopathic gangsters are not confined to the city limits.  Lupino shimmers as a tough broad who won’t be pushed around by anybody, and sings a smoky rendition of “One for My Baby.”  Sandwiched between her studio contract and her career as a director, she bought this story for herself and arranged with Fox to star.  “A minor classic of forties film noir with major pleasures” (TCM.com).

Ida Lupino was sometimes called “the poor man’s Bette Davis” which meant, essentially, that she was offered her choice of roles–if Davis refused them.  She had some spectacular parts through the 1940s, but after leaving Warner Brothers, she spent most of her career behind the camera, as one of the few women directors of the classic Hollywood era.

She was born to be in show business, her family had been in the theater since the Renaissance, and her father, Stanley Lupino, was considered to be one of the best actor comedians in Great Britain.  She grew up backstage, writing and performing, and studied in London at the Royal Academy of Dramatic Arts.  She acted in British and American films, but her first big hit was in the Victorian-set  Adventures of Sherlock Holmes, with Basil Rathbone as the great detective, and then acted as the spirited Cockney guttersnipe opposite Ronald Colman in Rudyard Kipling’s The Light That Failed.  It was because of her rapturous reviews in that role that she was given a juicy part in They Drive By Night.  Her courtroom mad scene was such a success that it got her a sweet new contract, only two films a year at $2,000/week, and she could freelance both in movies and on the radio.  She won an Oscar nomination and a co-starring part with Bogart in his next film, High Sierra. 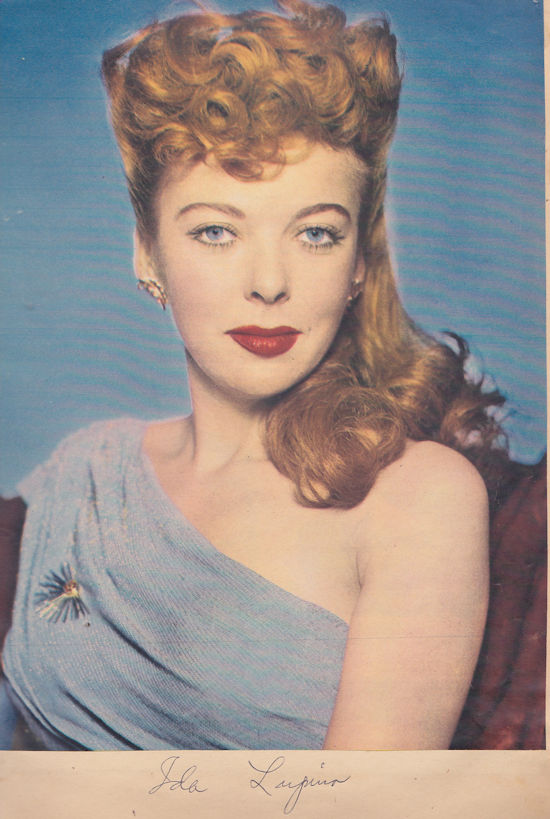 Here is a glamour shot from a 1940s movie star scrapbook. The archivist has written her name below her picture.

In 1947, she was 29 years old, and, refusing to sign an exclusive contract with Warner Brothers, parted company with the studio which had brought her tremendous fame.  She was divorced from her first husband, and described herself as a “bachelor girl.”  She had just met Collier Young, an agent and story editor who longed to write and produce his own films, and they had fallen in love.  Lupino had similar ambitions.  They were both taken with a novel called The Dark Love.  The original story was quite a bit more noir than the film, a sordid love triangle evoking the novels of James M. Cain.  The first hour of the film was not in the original story.  An agent, Charles K. Feldman, who was wooing Lupino as a client bought the rights to the novel for her, and sold it to 20th Century Fox, with the requirement that Lupino would star as night club chanteuse Lily Stevens.  She did sign with Feldman in appreciation for his maneuver (and the large salary he negotiated for her).

Director Jean Negulesco was part of Feldman’s package.  He agreed to direct it, even though he considered it a formula film.  “It’s very simple.  When a pretty girl walks by, all the lights have to be pointed at her breasts, and when someone throws a hat on the floor, you start a fight—it’s a formula like any other.  It’s well constructed:  it starts good, it develops right and it ends well.  What’s most important is that it is well made, and that the actors are good” (Capua 53).  Charles Bickford and Lee J. Cobb were considered for Wilde’s role, and Victor Mature for Widmark’s.  Once Widmark was cast, his volatility changed the dynamic of film.  The scriptwriter was only two-thirds of the way through, but Darryl F. Zanuck had three weeks to shoot, and was anxious to get started. 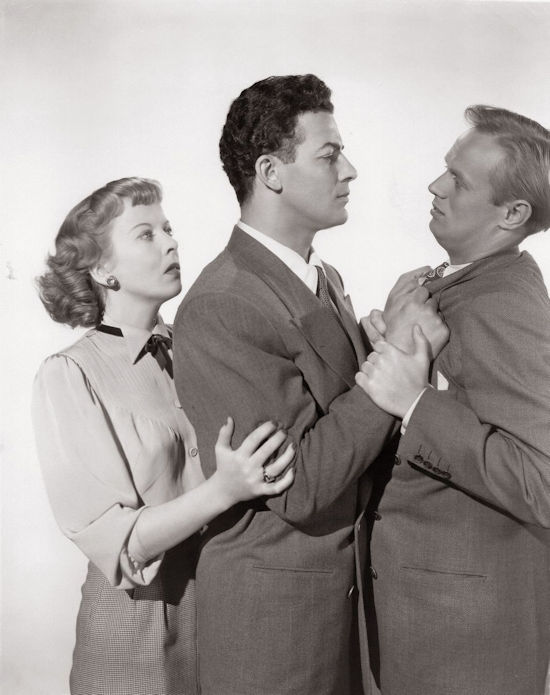 There were a lot of shots taken during this one still photography session. Another is below.

The two leading men in reality were quite different from the characters they played.

Richard Widmark was born in Minnesota, and spent his childhood in the upper midwest. As a kid, he loved the movies, particularly cowboy Tom Mix and Boris Karloff. He was thinking of studying law, but was sidetracked into drama at college, and taught drama at Lake Forest College.  He took off for New York in 1938, and developed an active career in radio dramas.  He worked through WWII, 4-F for a punctured eardrum. He debuted on Broadway in 1943, and tested for a part in Henry Hathway’s Kiss of Death (1947) stealing the picture from star Victor Mature and winning an Oscar nomination for his first film role, a giggling sociopath who murders an old lady in a wheelchair by shoving her down the stairs. This is only his third film, but already he was growing tired of playing villains.  He’s had a long career portraying loners on both sides of the law. He died in 2008, aged 93; he was married for over 50 years; he is baseball great Sandy Koufax’s father in law! He got strong reviews for his role in this film, “There is no need to stress the acting skill of Richard Widmark.  Once again, audiences are treated to his spine-chilling laugh as a man gone insane with hate and jealousy.  He is superb.  There are few actors that so well manage to portray the outer manifestations of a twisted mind” (Hannsberry 676)

Cornell Wilde was born in New York City, but grew up in his father’s native Hungary.  He was fluent in Italian, French, German and Russian, as well as English.  He planned to be a doctor, taking the pre-Med course at the City College of NY and winning a scholarship to Columbia Medical School.  He qualified for the 1936 Olympic fencing team, but quit the team to pursue an acting career.  After being hired by Laurence Olivier as a fencing teacher for a 1940 production of Romeo and Juliet, he was given the role of Tybalt, which led directly to a Hollywood contract. At Fox, he was hired as a second string Tyrone Power, and made many swashbuckling films which capitalized on his sword fighting abilities. In 1945, he was nominated for an Oscar for playing Frederic Chopin in A Song To Remember. He made many films noir, including the magnificent Leave Her to Heaven. He seems like a reasonable fellow on screen, and doesn’t really telegraph a sense of danger, which his character might have used in Road House. 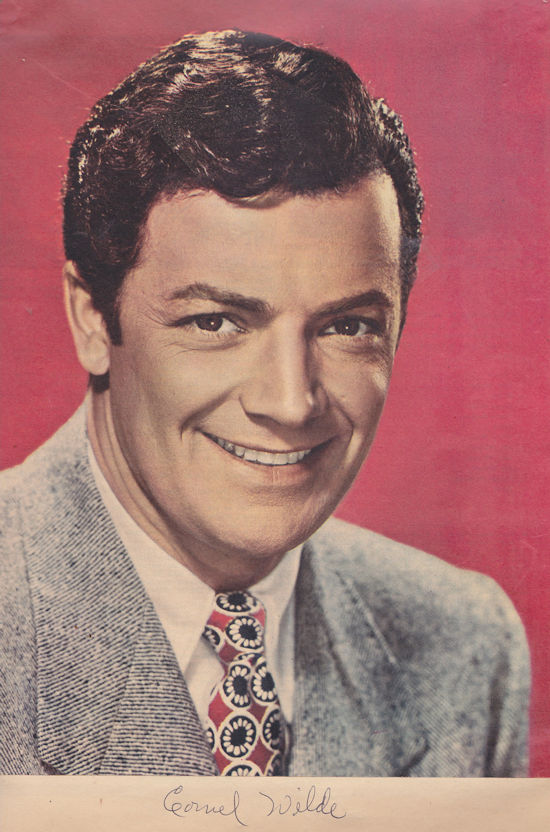 Here is another photo from the same scrapbook.

Celeste Holm was still working into her 90s. She won the Best Supporting Actress Oscar for her role in Gentleman’s Agreement opposite Gregory Peck in 1947. Holm played the thankless part of Susie the year after winning her Oscar.  She’s remembered today most often as Margo Channing’s best friend in All About Eve. Shortly after that, she left Hollywood to return to the theater, weary of what she felt was her typecasting as the wise-cracking best friend. 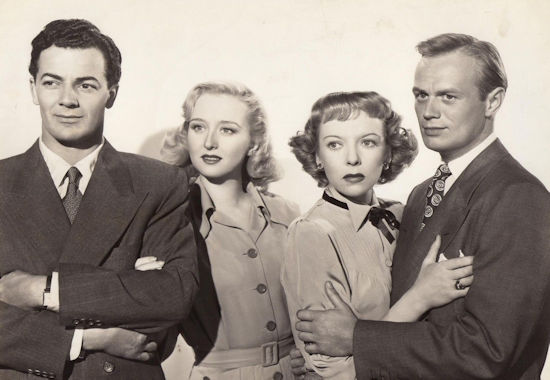 This version included Celeste Holm as the lovelorn Susie.

Shooting was strenuous.  Lupino was battered by a brawl with a hefty wrestler, and she twisted her ankle fleeing from Widmark’s character.  She was accidentally knocked down during a fight scene, and the screaming strained her voice.  Negulesco admired her, and appreciated her input: “All the suggestions she used to give on the set were all beneficial for the story and not for her role” (Capua 55).  In spite of physical demands of the shoot, Lupino said, “This is exactly the kind of picture I’ve wanted to do for a long time.  It has everything I’ve looked for the last year—hard hitting drama, action, suspense and a love story with a completely new twist.  If such a story hadn’t come along, I’d still be at home reading scripts” (Capua 55).

She warbled her own tunes, in a distinctive style, even if her voice was described as “a nutmeg grinder.”  The musical director was Lionel Newman, and he insisted, “her voice was so right, it wasn’t any great singing, but it was just perfect for the picture.”  He wrote “Again” specifically for her to sing in the film, she also sang “The Right Kind” and “One for My Baby” by Harold Arlen and Johnny Mercer, which had been written for Fred Astaire in The Sky’s the Limit.  “No-voice Lupino sang them and placed them first on the hit parade” her director said (Donati 142). 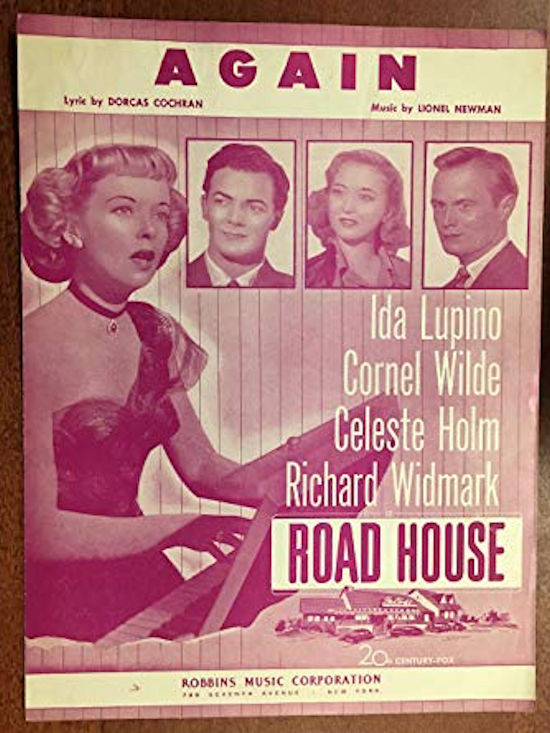 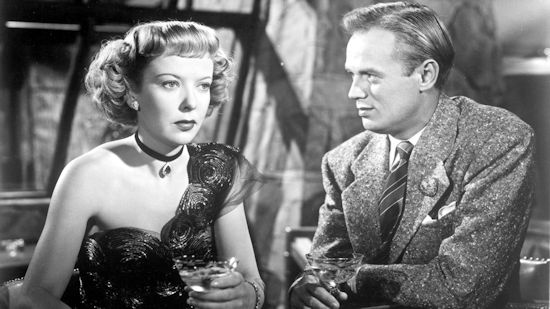 She also had twenty costume changes.  I saw a nitrate print of this at the TCM Classic Film Festival, and a silver lame gown (designed by Kay Nelson) shimmered so enticingly under the dramatic lighting that it almost became a character in itself.  She has a couple of very racy outfits, some white short shorts, and in another scene, a knit tube top held up by a halter neck of thin string.  She wears that one in which bowling is used as foreplay and sexual release; and in which Lily makes it clear that Pete (Wilde) doesn’t need to teach her anything. 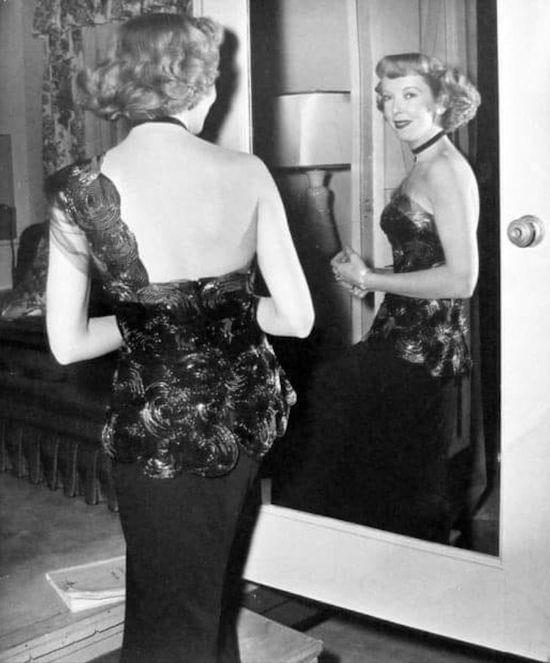 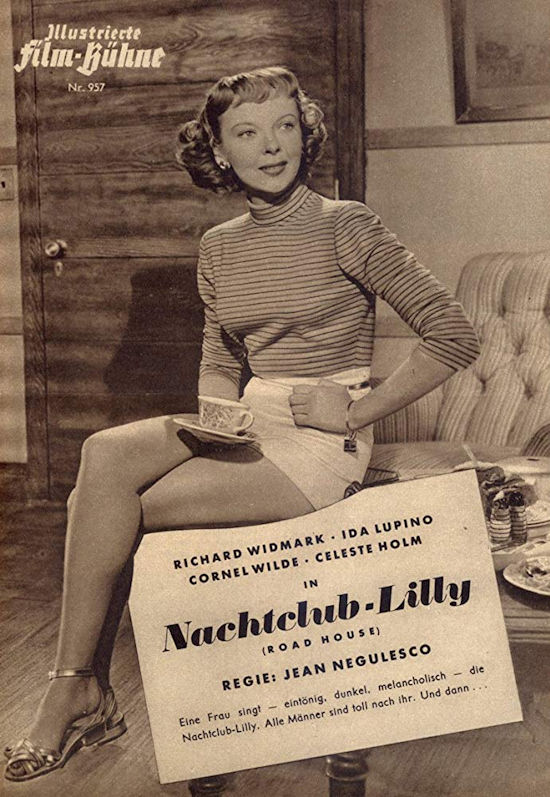 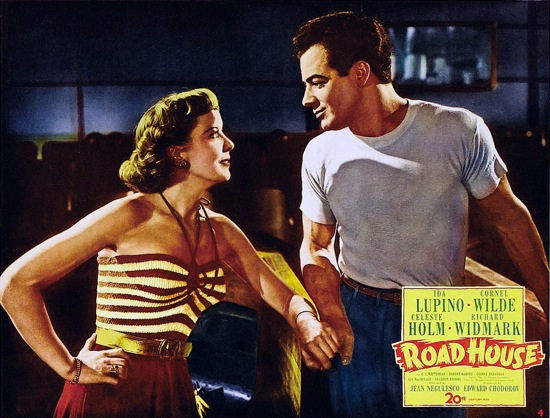 Cornell Wilde remembered, “She was so real, offbeat and just lots of fun.”  But, they also had serious discussions about the so-called Red Menace in Hollywood, “We were, a lot of us, very much against that louse, Joseph McCarthy” and the alarm of being labelled a fellow traveler was beginning to ripple through Hollywood (Donati 141).

Lupino’s Lily is an existential loner, much like the kind of roles Humphrey Bogart, or Robert Mitchum plays in film noir.  The men may fight over her, but she doesn’t care.  Audiences were enthralled by Widmark’s evil character “Frankenstein minus make-up” according to one critic. Lupino was praised for her memorable part, and she loved the powerhouse ending (Donati 142). The picture was a box office hit, and was the director’s only foray into film noir.  TCM’s Robert Oscourne called it one of his favorite films of the 1940s. 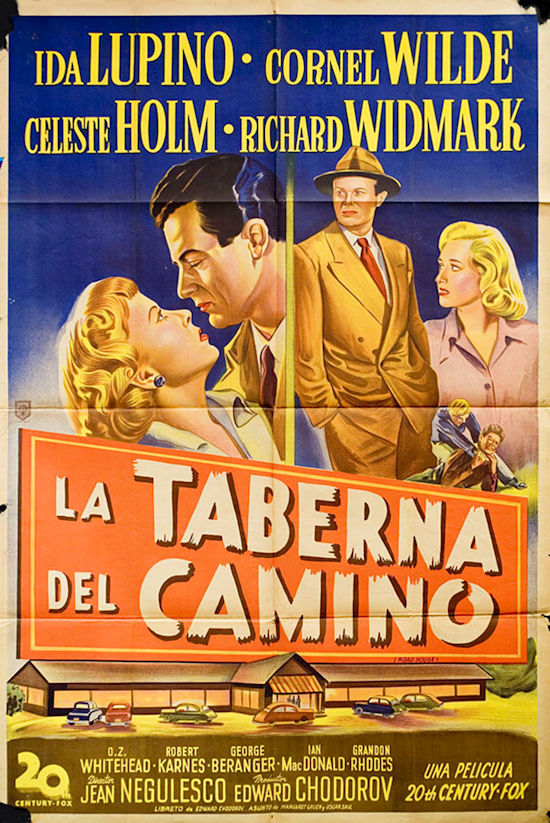