Dainty Lucy Honeychurch, overcome by the beauty of Florence, Italy, falls in love with the wrong man. Merchant Ivory’s most perfect film, winner of the Best Adapted Screenplay Oscar, balances Edwardian propriety with swooning passion. “An exceptionally faithful, ebullient screen equivalent to a literary work that lesser talents would embalm…like a holiday out of time” New York Times.

The Merchant Ivory films unite cultural influences to craft their examinations of diverse fish out of water.  A Room with a View was Merchant Ivory Productions first international blockbuster.  Nominated for eight Academy Awards and winner of the Oscar for the Best Adapted Screenplay, Art Direction and Costume Design, this film, the 25th made by the production company, received unprecedented acclaim.

A Room with a View was E, M. Forster’s third published novel, from 1908.  Director James Ivory’s witty examination of the hot blood pulsing beneath the starched Edwardian attire of Lucy Honeychurch, George Emerson and the other English visitors at the Pensione Bertolini struck a chord with 1980s filmgoers, not the least because of Helena Bonham Carter’s delicate, but steely Lucy, dashing Julian Sands as George and Daniel Day Lewis all at the beginning of what has turned out to be, for at least two of the trio, long lasting and brilliantly challenging careers. 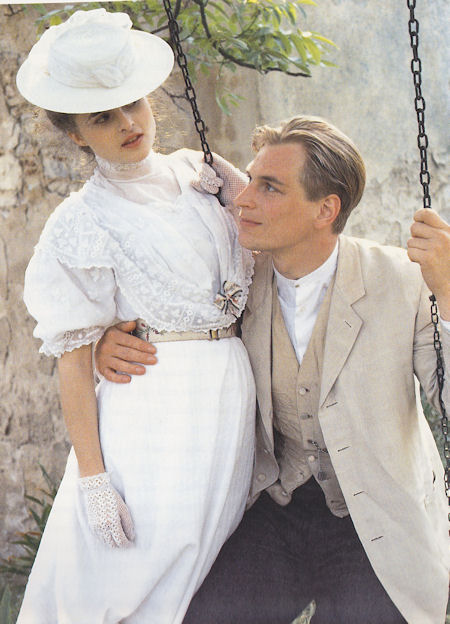 Ismail Merchant was born in Bombay, India, in 1936, which is, of course, as Mumbai, still the center of Indian filmmaking.  When he was 13, he met the glamorous film actress, Nimmi, herself only in her 20s, who took the young man under her wing as a devoted acolyte, taking him to the studios, and insisting that one day, he, too would be a movie star.  He ended up instead at NYC, obtaining a master’s degree in business, while continuing his lifelong, passionate movie-going.  He got a job at a major advertising agency, McCann-Erickson, and while there made a short film called The Creation of Woman using Indian dance to tell a mythological story.  Using his advertising experience, he promoted the film to an Oscar nomination, which became his Hollywood entrée.  On his way to a screening of his film in Cannes, he stopped off in NYC and was invited to a screening of a film about Indian miniature painting by a young director named James Ivory.  In 1961, they agreed to found a company that would make films in India for Western audiences.

James Ivory was born in Berkeley California, in 1928.  He loved the movies as a boy, too, and constructed a play theater at home so he and his younger sister and the neighbor children could put on their own plays.  He studied architecture and fine arts in college, and then went to USC Film School, where his first film was Venice: Theme and Variations.  He assumed he would be continuing a career as a maker of 16mm documentaries, until his first collaboration with Merchant, and writer Ruth Prawer Jhabvala.

Ruth Prawer was born in 1927 in Cologne, Germany, into a well to do Jewish family.  Finally able to leave in 1939, the family relocated to England, where Prawer studied English literature at London University.  There she met Cyrus Jhabvala, an Indian student studying architecture. They were married in 1951, and moved to India.  Prawer Jhabvala immediately began writing fiction about India, as if she were an Indian, herself.  The country’s effect on her “was stunning, overwhelming, beyond words.  I entered a world of sensuous delights…” (Long 22).  After a decade, she realized that, she wasn’t Indian after all.  Her writing took another turn, and she moved to New York City.  In 1961, Merchant and Ivory visited her there, and they began their long collaboration. She died recently, on April 3, 2013, at the age of 85.

In 1980, James Ivory proposed an adaptation of Forster’s A Room with a View.  After Heat and Dust and The Bostonians, Ivory said he couldn’t face another literary period piece, but Merchant and Jhabvala, noting that they already had an advance for the script said, “Just get on with it!” (Long 138).  Jhabvala did the adaptation, which Ivory rewrote, and then Jhabvala revised a final time. 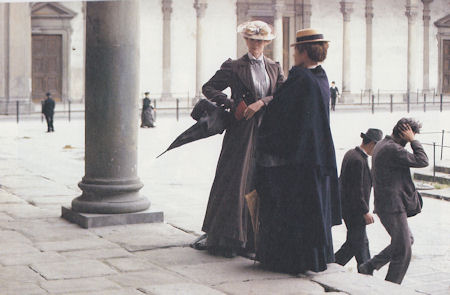 In looking for financing, they tried Samuel Goldwyn, known for their prestigious, boutique productions.  They were told that Goldwyn was only interested if the characters were Americans, and that all the older characters should be eliminated, as they were of no interest to younger filmgoers.  The older and younger Emersons would have to be combined into one character.  They said “thank you” and left, Merchant was so infuriated that he found other financing almost at once, and the Goldwyn Company was certainly sorry, later. 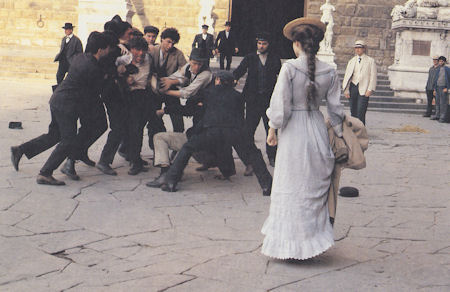 The film was shot on location in Florence, notably at the Piazza della Signoria and the church of Santa Croce.  When Merchant began to make the arrangements for filming in the Piazza, city officials asked him how many meters he needed for how many minutes, when he needed the square cleared completely for two days.  It was becoming clear why so few films were shot on location in Florence.  The medieval cobblestone streets were picturesque, but also vital to the daily commerce of the city.  One intersection blocked, and Florence ground to a halt.  A meeting with the mayor of Florence, said to be the second most important person in Italy, a dispensation of some of the famous Merchant charm, and they were granted the right to shoot in the Piazza.  The mayor even knew of an apartment, on the Oltrano, the other side of the Arno River, that would not have Forster’s exact view of the city, but a lovely one encompassing many famous Florentine landmarks.  Although Florence had changed in some respects (the view that is such a point of contention no longer exists, choked by traffic, the buildings which once edged the Arno River were bombed by the Nazis during WW II and replaced)  but some angles of Florence look just as it did in Forster’s day. The sumptuous settings are photographed to tremendous advantage by Tony Pierce Roberts.  Every time there is shot through the window though, you may imagine if you wish, Merchant on the ground stopping traffic so the scene could be filmed. 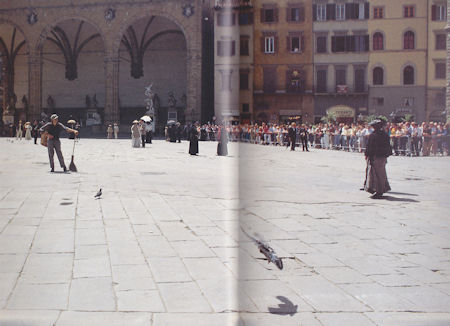 Here you can see the spectators watching filming at the Piazza della Signoria.

The scenes in England were filmed  on the estate of film critic John Pym around Sevenoaks,  Kent.  The Sacred Lake was created by production design, since they could not find a suitable existing body of water.

The selection of the Puccini arias, sung by Kiri Te Kanawa came about as Ivory listened to an afternoon of recorded arias with a friend who was an opera connoisseur. Finally,  he heard one that seemed to evoke the passion he required.  The aria from Gianni Schicchi became quite popular after the film’s release.  Helena Bonham Carter did not play the piano, yet Lucy’s musical ability must hint at her hidden romantic depths.  She was coached extensively so her keyboard appearances would be convincing.

Daniel Day Lewis was cast because Ivory met him at the suggestion of his casting director, “I liked his personality.  I liked him.  It was a simple as that.”  In 1985 he also played a gay Cockney punk in My Beautiful Launderette, which opened in NYC on the same day as A Room with a View. Helena Bonham Carter was signed when she was just 19.  “There was something artless about her that seemed right.  She sat scowling on the sofa with her short legs stuck out in front, and her outlandish shoes.  But, she was very quick, very smart and very beautiful” (Long: Conversations 203). 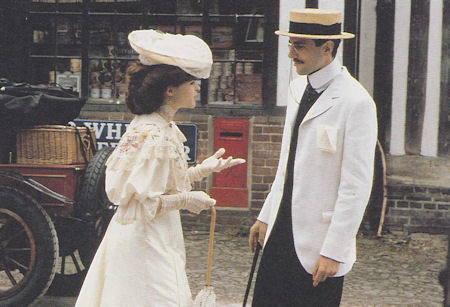 When the film was chose to open the Delhi Film Festival in India, Merchant invited Helena Bonham Carter to accompany him.  “Helena is a very spirited young lady” Merchant wrote, ”always ready for an adventure, and she agreed to come even though she could only stay for 24 hours.  At an elaborate lunch hosted by Raj Kapoor, head of Indian cinema’s first family of acting, and brother of Shashi Kapoor, who had acted in many early Merchant-Ivory films, “the Kapoor clan, four generations of then, fell madly in love with her.  They refused to let Helena leave, and they tried everything they could to persuade her to stay in India and become a singing and dancing damsel in distress in Bollywood movies” (Merchant 111).

The cast is a spectacular ensemble, not just the younger romantic triangle, but Maggie Smith and Denholm Elliott (both Oscar nominated) Judi Dench, Simon Callow (who originated the title role of Amadeus on stage) and as Lucy’s little brother, Freddy, Rupert Graves (who plays Inspector Lestrade in the BBC Sherlock). A recently discovered fun fact:  When Tippi Hedren, star of Alfred Hitchcock’s The Birds, was awarded Best Newcomer Female at the Golden Globes in 1961, one of her rivals for the award was Maggie Smith. 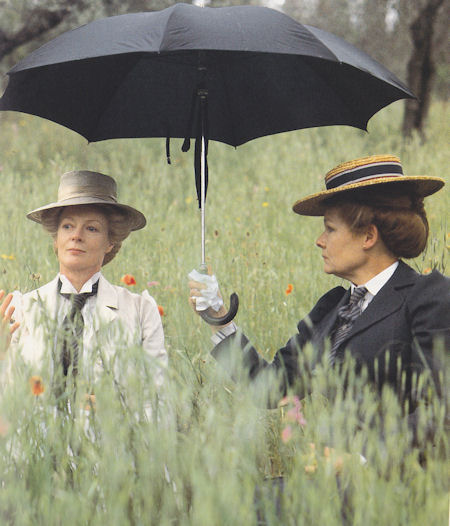 One cogent fact omitted from much of the discussion about the genteel Merchant Ivory films is that their partnership was personal, as well as professional.  Even some of Ismail Merchant’s obituaries in 2005 kept this aspect of their relationship private.  But, since virtually every one of their films deals with individuals from one culture trying to adjust to another, it seems pertinent that their personal cross-cultural accommodations, is reflected in their personal life and their life’s work.

A Room with a View cost $3 million, and grossed $1 million in 15 weeks at one NYC theater, going on to $24 million in the US and $70 globally, unheard of for an art film, and beyond Merchant-Ivory’s wildest dreams. Shot in ten weeks, the trim budget did not allow for much rehearsal time.  It won many international film prizes, including the British Academy Award for Best Picture, and the Donatello prize for Best Foreign Language Film in Italy. Major studios were suddenly interested in Merchant Ivory films, hoping to purvey a small investment into a large return.  But, the production company never relinquished its independence.

Film historian Annette Insdorf said the film’s tremendous success was because it has “a delicacy, a charm, a whimsical quality and an intelligence that audience had been starved for.  It strips away the social veneer of the characters and reveals basic human needs and their impulses, and there is something refreshing and liberating about that” (Long 145).
Ivory asked about its success said, “I think people hadn’t seen that kind of a funny, lighthearted English period film in many, many years.  Not since Tom Jones…Wonderful acting, wonderful locations and meant to be enjoyed—you know, ‘sophisticated entertainment.’ It s a very rare thing in the movies.  It attracted all kinds of people, including teenaged girls from all over the world, as well as intellectuals, nostalgia buffs, and people who were crazy about Italy—like me” (Long: Conversations 207). And, of course, now, with the global success of Downton Abbey, A Room With a View seems to spark perfectly with the current passion for intelligent historical romance. 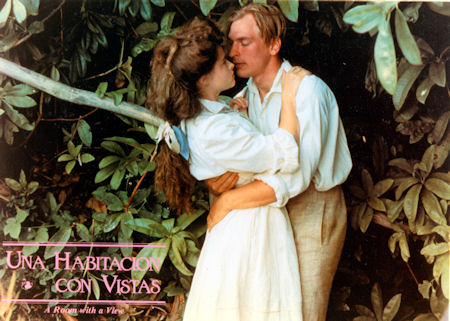