There used to be another word for terrorist—saboteur. A mysterious fire at a defense plant triggers a cross country mistaken identity chase that ends with a thrilling battle atop the Statue of Liberty.

Alfred Hitchcock came to the United States under personal contract to producer David O. Selznick, for whom he would make Rebecca, based on the best selling novel by Daphne DuMaurier. The relationship between producer and director was not a smooth one, and Selznick bartered Hitchcock and Saboteur as a package to Universal for $40,000. This film is the center of a trilogy of films with essentially the same plot, beginning with Hitchcock’s great English thriller The Thirty Nine Steps and concluding with North by Northwest.

Hitchcock began working on the original story treatment with Joan Harrison, an old colleague. After her departure, a young contract writer, Peter Viertel, was assigned to Hitchcock, and he wrote an incomplete screenplay with enough substance to begin production. Dorothy Parker was brought in to write dialogue, and her sly anti-establishment wit is much in evidence. The censors at the Production Code office took offense at many of the “anti-social” lines in the script, most supplied by Parker, like when one character criticizes the police for thinking that “frightening people is the first step towards protecting them.” Viertel recalled Hitchcock’s clashes with Selznick and said, “Hitch would have made any picture to get away from David” (Krohn). Saboteur made a lot of money (budgeted at $750,000, it grossed $1.6 million) and laid the groundwork for Shadow of a Doubt, considered Hitchcock’s first American masterpiece, made for Universal with the same producer, Jack Skirball.

Hitchcock had no control over the casting. Robert Cummings and Priscilla Lane had been paired as a romantic couple in a production that fell through, and the studio insisted that Hitchcock use them, in spite of the fact he had been promised actors of his choosing. Hitchcock made unsuccessful attempts to interest other actors in his film. Gary Cooper had turned down Hitchcock’s previous film, Foreign Correspondent (although he later regretted doing so) and would turn down the lead in this one, as well. After hoping for Henry Fonda or Gene Kelly, the director was forced to accept Robert Cummings. Hitchcock later said ruefully, “He has an amusing face, so that even when he’s in desperate straits, his features don’t convey any anguish” (Maxford). He is, if bland, an “all-American” sort of fellow, who would never be confused with the dashing heroes of Hitchcock’s British films, played by skilled actors like Robert Donat, John Gielgud and Michael Redgrave.

For the heroine, Hitchcock had wanted Barbara Stanwyck, but had to settle for Priscilla Lane. She would only appear in three more films after this one in her brief seven year career. She was one of three sisters, along with Rosemary and Lola, who appeared mostly in Warner Brothers films. The girls were agressively managed by their stage mother. Rosemary and Priscilla became famous as band singers with Fred Waring and the Pennsylvanians, making their screen debut with the band in Varsity Show. All three sisters appeared (as sisters) in Four Daughters (with Gale Page) and its sequels. Priscilla was the most able actress of the sisters and appeared in some decent films, including The Roaring Twenties with James Cagney and Arsenic and Old Lace with Cary Grant. Saboteur was one of her favorite films, and according to her biographer, Daniel Bubbeo, contains her best performance, although one of Hitchcock’s biographers William Rothman, says she plays her part “like a block of wood.” A month after Saboteur, she married her second husband and virtually retired from the screen. 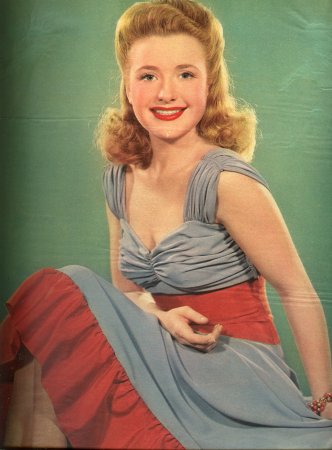 Hitchcock had hoped to cast veteran cowboy actor Harry Carey as the crypto-Nazi gentleman rancher, but Carey did not want such a negative part, thinking it would betray the fans who knew him as a hero. Hitchcock envisioned the villain as an America First member, a pro-German American Fascist. To Hitchcock’s disappointment, Otto Kreuger played the part instead, as a more conventional heavy. His ruthless killer, presenting the face of a kindly grandfather playing with his grandchild foreshadows, perhaps, the cat-fancying villains of the James Bond era.

Hitchcock was looking for an unknown to play the title role, and after a screen test chose stage actor Norman Lloyd. Lloyd was hired at $300/week for four weeks and vividly recalled the 21 hour plane ride from New York to Los Angeles to begin filming. Some of the Statue of Liberty scenes were filmed in New York, in the early hours of December 15, 1941, just a few days after Pearl Harbor. The weather was bitterly cold (even though it was spring in the script) and overcast skies resulted in multiple takes of each sequence. Lloyd recalled an incident from the location shooting, when a little old lady asked him, “Do you have to do this every time you come and see the Statue of Liberty?” It turned out a real-life tourist from Virginia getting an early start on her sight-seeing had wandered in on the group of extras having coffee and doughnuts and decided that all the stories about unfriendly New Yorkers were simply untrue. When told she was appearing as an extra in a film, she quickly disappeared. The legal department tried to locate her, without success, to sign a release, although she does appear in the film. Norman Lloyd became a valued colleague of Hitchcock’s and, with writer Joan Harrison, was integral to the Alfred Hitchcock presents tv series years later. Lloyd, in fact, directed many of that show’s best episodes.

Hitchcock loved the sophisticated technology that Hollywood could bring to his films. The Statue of Liberty sequence is still striking. Audiences are a little more sophisticated now, although at the time viewers were completely mystified at how it was shot, and studio technicians viewed the film repeatedly to decode the photographic tricks of the tour de force climax. Nothing could have pleased the director more, since he enjoyed both the thrill and the mystery of it all. Another recurring theme of Hitchcock’s is the fear and danger lurking in friendly crowds, as the hero and heroine are helplessly, publicly, trapped by the attendees of a charity ball. As far as the climax, Hitchcock said later that he always regretted placing the villain in greater peril than the hero, an error he rectified in North by Northwest. 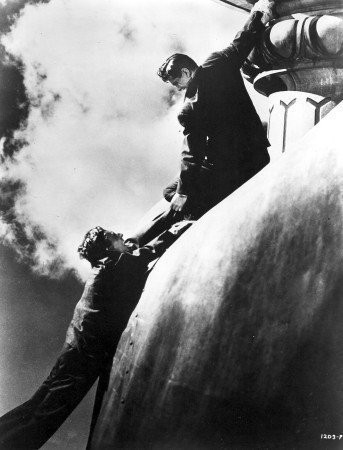 Saboteur was Hitchcock’s contribution to wartime propaganda,as evidenced by the clunky patriotic dialogue (no doubt not scripted by Dorothy Parker). A complicated film, there were 1000 scenes and 4500 camera set-ups, many at Universal City studios, but also in New York. Hitchcock used a telephoto lens for some scenes, shooting from a mile away or more, to create both a sense of surveillance and the vastness of the American continent. The Fifth Avenue mansion was built at a cost of $45,000 (compared to the cost just under $2,000 for the interiors of the house in Hitchcock’s next film, Shadow of a Doubt, built under wartime restrictions). A desert was also custom made at the studio.

Saboteur capitalized on current events to bolster its fictional story. The film used newsreel footage of the capsized liner Normandie, and implicated that Nazi saboteurs were responsible for its sinking. The largest ship in the world, it was being readied for troop transport when it was sunk, presumably by saboteurs, although the Navy bristled at the implication, and insisted that the scene be cut after the film’s release. Hitch always claimed, ‘I lay out the script shot for shot. It’s boring to shoot a picture because I’ve done it all in the script.’ But that was an example of his not having done this” (Krohn). Lloyd recalled, “From a directorial point of view, it shows a man who was really on his toes and aware of an opportunity…to take history at the moment and incorporate it into the script.”

Thanks to Mike Mashon for the archival print from the Library of Congress.