Sam Katzman: The Sultan of Schlock

I was recently commissioned to write an introduction to an Arrow Films Blu-Ray box set of a selection of monster movies produced by Sam Katzman. Here is a preview of what you will find within: 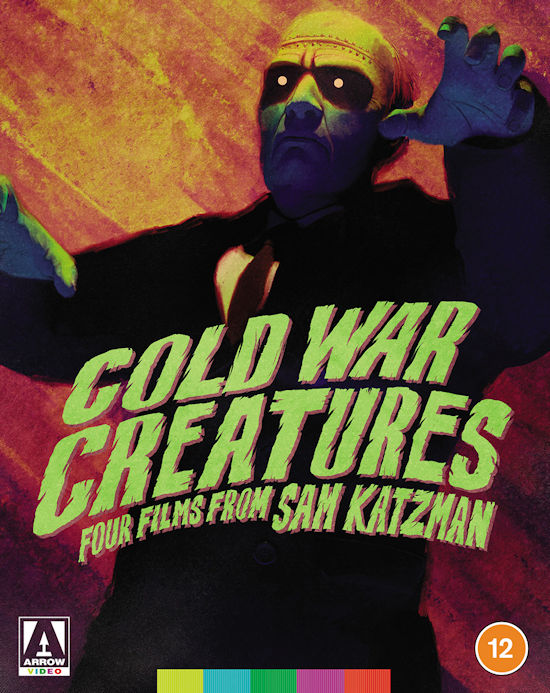 We tend to think of Hollywood history in terms of the major studios, MGM, Paramount, Warner Brothers. The moguls, with their empires of unbearably glamourous, carefully nurtured stars. Films that win Oscars or aspire to win them.  But, there was a scrappier Hollywood, uncaring about beautifully maintained images, cultural prestige, or Art.  Movies that made plenty of moola, but didn’t win awards.  And, right at the center of that Hollywood was Sam Katzman. If you were to guess who the most prolific Hollywood producer of all time was, his name probably wouldn’t bubble to your lips.  From 1933 to 1972, he had hundreds of producer credits, sources can’t agree on exactly how many.  He was king of the genre film—if it was a trend or a fad, and people would fork over good money at the box office–he was all in.

The Creature With the Atom Brain (July 1955) directed by Edward L. Cahn, was written by a man with sterling horror movie credentials, Curt Siodmak.  He wrote the screenplay for The Wolf Man, starring Lon Chaney, Jr., making up many werewolf “traditions” that still echo today, and contributed to numerous Universal monster movies, as well as writing Donovan’s Brain, I Walked With a Zombie and The Beast With Five Fingers. The film re-works the Frankenstein story, relocated at an intersection of paranoias: escaped Nazi scientists and atomic bombs. Cahn’s directing is quite creative, with a point of view camera angle that is supposedly what the Creature can see through his eyes, projected onto a tv screen in the mad scientist’s laboratory.  There are many tv and movie screens, in fact, adding a fear of surveillance into the plot. The make-up design for the army of re-animated corpses is thrifty, flip top skulls with a row of dots (rivets? stitches?).

The Werewolf (July 1956) was directed by one of the Katzman auteurs, Fred F. Sears.  There wouldn’t seem to be a demand for another werewolf origin story, but Sears evokes a film noir atmosphere with his dramatic lighting, deep focus compositions and tracking shots. A bonus is a surprisingly emotional performance from Steven Ritch as the title character, Duncan Marsh.  Location filming in the snow at Big Bear Lake added to the uniqueness of the setting, where virtually the entire population wears rustic plaid.  Sears was a workaholic who dropped dead of a heart attack at 44, in November 1957.  He felt cheated of the prestige assignments he thought his just reward.  There is a definite feeling of persecution and unfairness in The Werewolf, the hero has a minor car wreck and ends up injected with a serum created from irradiated wolf’s blood, by a pair of mad doctors, whose plan is to help humanity withstand nuclear fallout. Or, something. Marsh desperately wants to reunite with his wife and son, but knows his lycanthropic condition makes it impossible.  Sears’ own family was splintering at that time, he seems to have brought his own anxieties to the screen in this low budget gem.

The Zombies of Mora Tau (March 1957) were created by African voodoo and haunt a shipwreck, and those who seek to profit from it.  Long dead sailors (played by beefy wrestlers) have been marinating in the bay, and they emerge dripping from the deep festooned with seaweed, to destroy those who seek their diamond treasure.  There are some atmospheric scenes, as when they sit up in unison in their coffins hidden within a mausoleum, and it was filmed on a gloomy location at the Baldwin Ranch, near the Santa Anita Racetrack.  There are no Black people in this Africa, which is mystifying, but spares the viewer from any Jim Crow era racism.  The plot does not bear close examination, and the highlight is the brittle performance of bad girl Allison Hayes, forever immortalized as the 50 Foot Woman in the Attack of…  One of Katzman’s finer qualities was to hire blacklisted writers.  Raymond T. Marcus was a pseudonym for Bernard Gordon, and Katzman didn’t care about his political status, only if the writer was reliable and cheap.

The Giant Claw (June 1957) was also directed by Fred S. Sears, arguably, a less personal project.  Humanity is threatened by an extraterrestrial antimatter bird, “as big as a battleship.”  Like many giant monster films of the era, it lavishly uses stock footage for supposed verisimilitude, and a slightly better than average cast sells the passable scientific mumbo jumbo with sincerity.  The token female on the team, a mathematician, is kissed while she’s asleep (bleh) but wears sensible shoes, which is something.  Sadly, the terrifying beast is rather Muppet-y, thanks to some free-lance Mexican puppeteers, and this “nightmare on wings” enters the scene as a blur, the better to delay audience disappointment.  Still, The Giant Claw has cult classic status, based on its distinctly shoddy special effects.  If Katzman paid for it, it was going to appear on screen, no matter what. 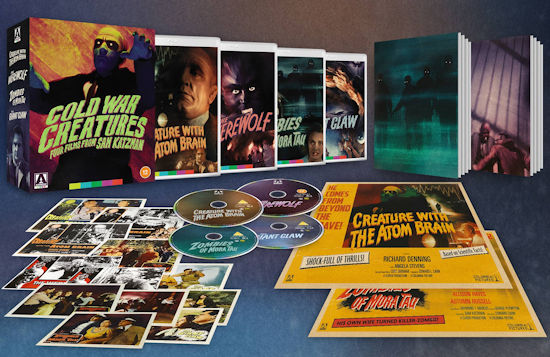