The silent version of The Sea Hawk is a faithful adaption of the Rafael Sabatini novel, which means it bears no resemblance to the 1940 Errol Flynn film of the same name. Sir Oliver Tressilian, one of Elizabeth I’s gentleman pirates, has retired to his Cornwall estate and hopes to marry the dainty Rosamund Godolphin. Sir Oliver’s weakling half-brother Lionel carves up Rosamund’s hot-headed brother in an impulsive duel. Lionel arranges for Sir Oliver to appear to have taken guilty flight, by hiring a rascally sea captain played by Wallace Beery to abduct him. Beery’s ship is captured by a Spanish galleon and Sir Oliver is chained to the oars, “His body hardened by grueling toil became as tempered steel, his soul a cauldron of smoldering hate.” Then, the Spanish ship is captured by “the fighting Basha of Algiers.” Disgusted by Christian’s inhumanity to Christian and “ripened for Allah’s service” he becomes Sakr-el-Bahr, “The Sea Hawk.”

Both the novel and the silent version of The Sea Hawk are products of an early 20th century infatuation with “The Orient” a louche country of the imagination where the constrictions of Western civilization could be discarded in an atmosphere of luxury and sexual license. The film exploits this dramatically both in the slave auction of the “milk-faced” simpering Rosamund, and in the amount of time spent admiring Sill’s (mostly) naked body. Twenties heart-throbs often look a bit scrawny to modern eyes but the novel permission for women to “gaze” (as the academics say) at the male body was part of silent films vast fan appeal. Sir Oliver’s stint as a galley slave, as well as the early scene in which he proves to a sympathetic judge investigating the duel that he has “no fresh wound on his body” by (almost) doffing his robe must have been pretty racy stuff. Perhaps the Flynn The Sea Hawk, which could almost be a prequel to this tale, was revamped because the vogue for Orientalism seemed passe (although the 40s would bring a new cycle of “Arabian Nights” movies). Or, perhaps the studio balked at having their premiere heart-throb renounce Christianity and wear skirts through the second half of the picture.

The mens’ (European) costumes in this film are fairly accurate, almost to the point of appearing ridiculous, with elaborate trimmings, large ruffs and puffed breeches. Flynn’s Elizabethan style garb was always minimalist in comparison. Rosamund’s costumes, as almost is always the case in the silent era, are more 1920s than 16th century, owing more to the “robe de style” popularized by Jeanne Lanvin than Elizabethian farthingales. 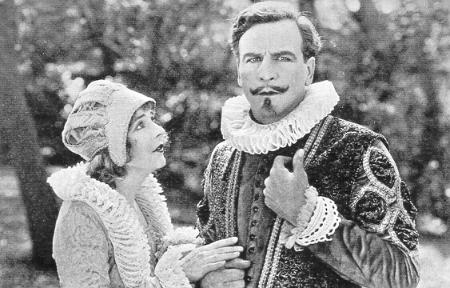 The battles at sea are exciting, and really filmed on the ocean surrounding Catalina Island. So many silent films were shot there, the location companies must have been in danger of colliding with one another. Studio tanks supplied most of the action (along with clips from Captain Blood) in Flynn’s version. Robert Osbourne said in a TCM introduction that the battles in the silent version were reused in the sound version. Clearly, this is not the case, since half the ships in the battles are “Moorish” ships with lateen sails (triangular sails on slanted masts) not the square-rigged ships that battle one another in the later version.

The 1924 ships were refitted by Buster Keaton’s innovative technical director, Fred Gabourie. Keaton was between films, and his producer Joseph Schenck had loaned Gabourie to First National. He toured the Pacific coast looking for real ship hulls that could be reconstructed to look like Elizabethan era vessels. It was during that mission that he found The Buford, the ship that Keaton would buy and use so brilliantly as The Navigator. 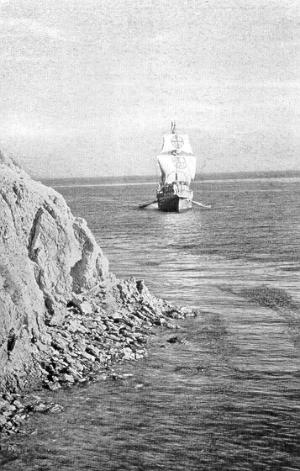 The proud sails of the Spaniard bore down

After the commercial success of the novel Scaramouche (1921) and the Rex Ingram film version starring Ramon Novarro, Sabatini’s earlier novels, including The Sea Hawk (1915) were swiftly reprinted. Sabatini admired the swashbuckling novels of Alexandre Dumas (as well of the lesser known Mary Johnston). Of course, Douglas Fairbanks’ triumph in the romantic adventure genre, starting with The Mark of Zorro in 1921, sparked success for swashbuckling films throughout the 1920s. Both Wallace Beery and Enid Bennett had starred in Fairbanks’ Robin Hood (as Richard the Lion Heart and Maid Marian, respectively). “Sabatini meticulously researched his chosen period. Then his inventive and convoluted incidents were bathed in a rich prose, which was carefully structured to complement his themes of injustice, revenge and reconciliation. Escapist readers of the time delighted in every melodramatic page” (Rudy Behlmer) Behlmer quotes Brad Darach, “Sabatini’s heroesall suffer from a terminal case of pedestalism. They can stand up to any man alivebut one glance at the heroine’s chill charms throws them into hilarious spasms of unworthiness.” 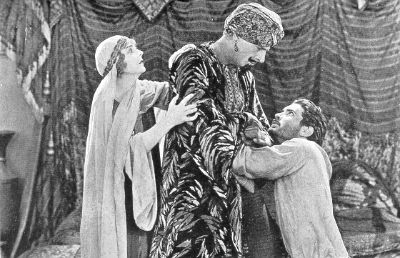 At last he had his treacherous brother (Enid Bennett, Sills, Lloyd Hughes)

Sir Oliver is played by Milton Sills, a popular actor of the 1920s often ghettoized as a “strong, silent type” (whatever that means). The Sea Hawk is the only one of his films I have ever seen, and that is not how I would describe him. He is quite dashing, full of dramatic passion; thirsting for justice and revenge. Perhaps, like the similarly described Richard Dix, his reputation suffers because few of his silent features have survived. They are certainly not revived. 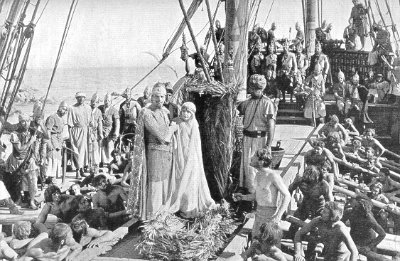 Sills was born January 12, 1882, into a prosperous Chicago family. At University of Chicago he became enamoured of the theater. He rejected the possibility of pursuing a Ph.D. in philosophy and instead joined a stock company. Sills married his first wife, Gladys Wynne, in 1910. Their only child, Dorothy Sills Lindsley, had a wonderful reminiscence of her father on the Silents Majority website, which seems to have vanished. His first film was in 1914, The Pit, an adaption of Frank Norris’ novel, directed by Maurice Tourneur; so even his debut had impressive credentials. He co-starred with many glamorous actresses including Irene Castle, Geraldine Farrar, Clara Kimball Young, Viola Dana and co-starred opposite Gloria Swanson in her first lead role in The Great Moment. The Sea Hawk was his 60th film. (It was Wallace Beery’s 140th film!) This was the most popular of the silent screen Sabatinis, making 2 million dollars; a huge hit. After a divorce, Sills married his second wife, actress Doris Kenyon in 1927. He made a few part-talkie and talking films. After filming Jack London’s The Sea Wolf in 1930, he died at the age of 48 of a heart attack after a strenuous tennis game. He maintained a lifelong interest in gardening and astronomy, and was one of the founders of both Actors Equity and the Academy of Motion Picture Arts and Sciences. 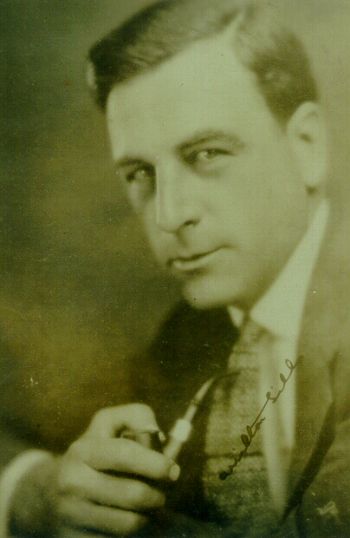 Lloyd Hughes plays a sniveling dog in this film, but his usual parts were considerably more heroic. He co-starred (again) with Wallace Beery and Bessie Love in the original version of The Lost World, as well as in Colleen Moore’s charming Ella Cinders. His career stretched through the last decade of the silents and the first decade of the talkies. 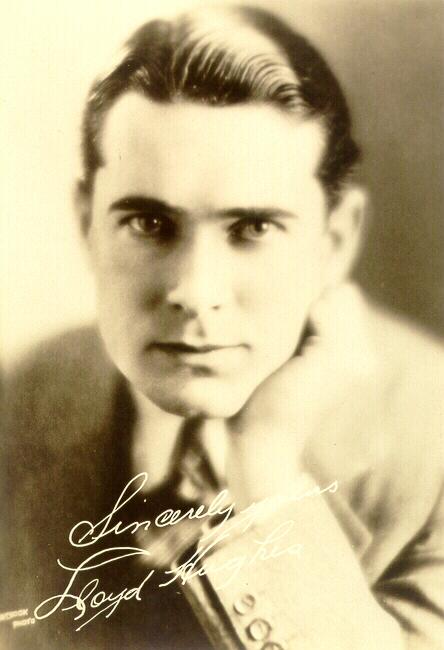 The Sea Hawk is a lavish production centered around the heroics of Milton Sills as Sakr-el-Bahr. Its pleasures are a revelation for those who might think the swashbuckling adventure film begins and ends with Fairbanks and Flynn. 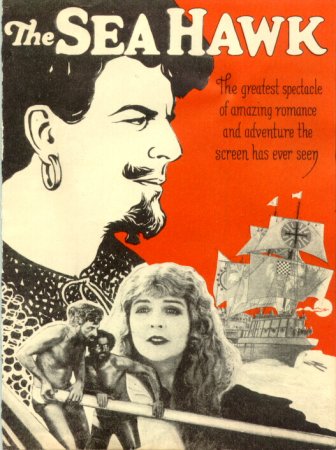 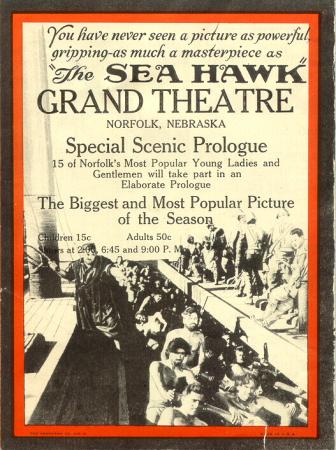 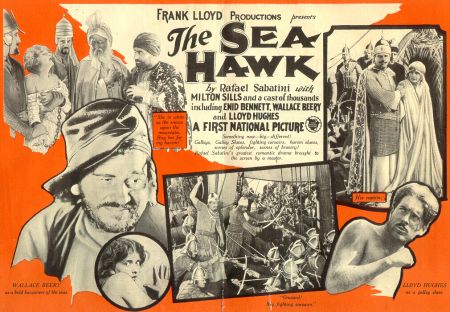 (Portrait of Milton Sills collected by Miss Jane Hendricks, who sent away for it during the 1920s. Lloyd Hughes photo, Sea Hawk ad from Moviediva’s collection. All other photos are from the Photoplay Edition of Rafael Sabatini’s The Sea Hawk, published by Grosset and Dunlap in 1924. Rudy Behlmer’s quotes from an introduction to the screenplay of the 1940 The Sea Hawk. Sills’ biography from December, 1971 Films in Review career article by Louis Devon, and from Dorothy Sills Lindsley’s memoir on the Silents Majority website.