A disillusioned knight returning from the Crusades treks across a Europe decimated by the Black Plague. He plays chess with Death for his life, giving Bergman a chance to question God’s silence. “It is wholly extraordinary, being at once mystical, realistic and poetic. It stands in the company of the great foreign films” (NY Post).

Director Ingmar Bergman was born in Uppsala, Sweden, in 1918. He had a strict Lutheran upbringing overseen by his father, a pastor. His childhood was not pleasant. When punished, he would be locked in a cupboard and told he’d be joined by “things that will eat your toes.” His childhood ambition was to be a projectionist, the result of sneaking to movie matinees after Sunday church services. In college, he majored in literature and art history. He began to write and direct plays and this led to his becoming a screenwriter. His first filmed script was in 1949, Torment, about a schoolboy tortured by a sadistic schoolmaster. He worked as a “script girl,” checking film continuity for other directors, giving him a chance to see how films were made. After a number of more formulaic movies, he made his first mature work in 1953, Sawdust and Tinsel.

The origin of The Seventh Seal was a one-act play called “Painting on Wood.” Bergman had been teaching at drama school, and wrote the play for his students to perform as a class exercise. As a boy, he had been transfixed by the agonized figures in the medieval paintings he saw when traveling with his father to rural parishes. “There was everything that one’s imagination could desire. Angels, saints, dragons, prophets, devils, humans. There were very frightening animals: serpents in paradise, Balaam’s ass, Jonah’s whale, the eagle of Revelation. All this was surrounded by heavenly, earthly and subterranean landscapes of strange yet familiar beauty. I remember Death playing chess with a Crusader, Death sawing at a tree to a branch of which clung a naked man with staring eyes, and across a gentle hill Death leading the final dance towards the dark lands” (Bergman in Hart). While writing the screenplay for The Seventh Seal, he listened to Carmina Burana by composer Carl Orff, which was inspired by songs written by minstrels wandering through plague-scarred Europe.

Bergman had a grand success at the 1955 Cannes Film Festival with Smiles of a Summer Night, a uncharacteristically romantic film, and the head of Svensk Filmindustri was in a magnanimous mood when Bergman approached him about his next project. He agreed The Seventh Seal could be made if the shooting schedule was short and budget small. Shot in 35 days for $150,000, it would be filmed mostly in or near the studio. Bergman was anxious to begin production before the producer changed his mind about letting him tackle such a death-haunted subject.

Bergman’s landmark film takes its epigraph from the Bible book of Revelations 8:1. “When he broke open the Seventh Seal, there was silence in Heaven for about half an hour.” But, the director was not as concerned with the God’s silence in Heaven as he was with His silence on Earth. The Black Plague acts as a metaphor for questioning the very existence of God. For both the director and his audience, the subject evoked the nuclear plague threatening the planet during the Cold War era.

One of the few scenes made on location was the Dance of Death. The crew was packing up for the day because of an approaching storm, but Bergman saw a stray cloud that he liked, and the camera was hastily set up again. Some of the actors had already returned to the hotel, so a few crew members and gawking tourists were dressed up to take their place. The scene was improvised in a few minutes and shot in a single take.

Filming went smoothly because of the warm atmosphere on the set. “It was such a fantastic time. We never slept. We only rehearsed and shot,” Bergman remembered (Cowie). This was Max Von Sydow’s first Bergman film, and he would go onto play many roles for the director over the years. Immediately after filming The Seventh Seal, he was acclaimed for his portray of Brick in a Swedish version of Tennessee Williams’ Cat on a Hot Tin Roof. Von Sydow’s knight anchors the the film with his quest for enlightenment, but his squire, played by Gunnar Bjornstrand, is the humanist touchstone, more knightly in many ways than his master.

Bergman put Death in a white clown’s face to demystify the unknowable, wanting him to be macabre, yet mundane. To make him “a figure who conversed, played chess and had no secrets, was the first step in my struggle against my monumental fear of death.” (Bergman). The Knight’s search for knowledge is also meant to echo the Original Sin…the more one seeks to know God, the farther away he is.

Bergman’s career has three distinct phases, his early films in which he dealt lightly with social and political issues, the mid-career films in which he ponders questions of faith, and the films of his old age, in which he muses on the solace that memory may or may not provide. The spiritual quest of The Seventh Seal and Wild Strawberries—both came out the same year—have become intellectual touchstones for cinema lovers, and landmarks of the vanished golden age of the international art film. Bergman’s work established that Swedish films were second to none on the world screen.

“The Seventh Seal is one of the few films really close to my heart. Actually, I don’t know why. It’s certainly far from perfect. I had to contend with all sorts of madness, and one can detect here and there the speed with which it was made. But, I find it even, strong and vital. Furthermore, in this film I passionately cultivated my theme to the fullest.” International audiences identified with both the visual power of the images and the accessibility of Bergman’s meditation on the reconciliation of childhood faith and adult rationalism. It is surprisingly lighthearted for such a serious topic and the many humorous moments act as a contrast to the Knight’s gloomy quest.

Woody Allen is well known as a great admirer of Bergman, and has attempted his own Bergmanesque films. His being far from a Scandinavian temperament, they have been among his less successful works. Roger Ebert has pointed out that the image of playing chess with Death is so powerful that it has survived countless parodies, one of which, “The Dove” you will see at the NC Museum of Art next week.

“What is most remarkable about Bergman’s achievement is that he projects the most pessimistic view of human existence with an extraordinary vitality. Conceding that life is hell and death is nothingness, he still imparts to the screen a sense of joy in the very futility of man’s illusions.” (Sarris)

“ It’s a magically powerful film…the actors’ faces, the aura of magic, the ambiguities and the riddle at the heart of the film all contribute to its stature.” Pauline Kael. Bergman reminisced, “The Seventh Seal swept like a forest fire across the world. I was met with strong response from people who felt that the movie struck right at their own inner doubts and agony.” 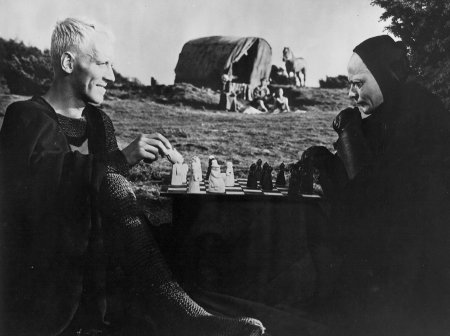