Silent comedy evolved from 19th century popular theater styles, including medicine shows, minstrel shows, Wild West shows, circuses, burlesque and vaudeville.  Hard working and well-travelled performers perfected their physical comedy skills over the course of many years as they played multiple daily shows, and often created a comic persona who was eventually brought to the screen.

One writer broke down comedy into six kinds of jokes—falls, blows, surprise, knavery, mimicry and stupidity (Dale 3).  Comedy plays into our fears of embarrassment and humiliation, the stuff of nightmares. They often end with a chase, because they have to end, somehow.  Basic fears, such as falling, for example, or spilling something, turn comedy into ritual. Slapstick may indicate the death of dignity, but the mishaps are ones from which we recover.  And, of course, it’s always funnier if somebody ELSE is falling down.  As William Dean Howells wrote in 1903 about vaudeville, “For my part, there are stunts I could see endlessly over again and not weary of them.  Can you say as much of any play?” (Dale 15). 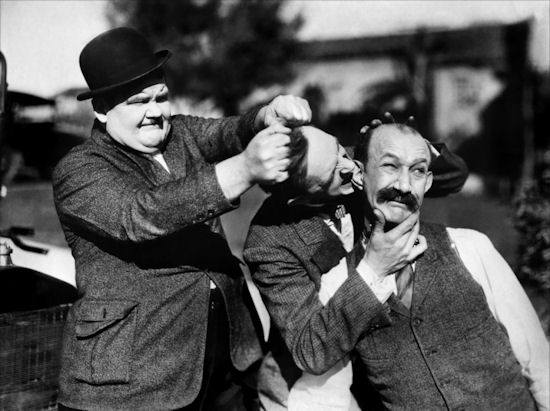 Silent era slapstick was often filmed without scripts, or only an outline, but the stars worked with the same groups of gagmen and tech people, with the star being the final arbiter of what was funny.  Sometimes the shorts were parodies of popular plays and films, but with the source forgotten, the point of the satire is occasionally a mystery.  Made for people who couldn’t afford the theater or the opera, early films are a fascinating window into the everyday life at the beginning of the 20th century, with glimpses of old Los Angeles, real houses, furniture and props, and the actor’s own clothing.

We’re going to see a very early Charlie Chaplin film, Gentlemen of Nerve, just as he is creating his character of The Little Tramp. Here he’s called Mr. Wow Wow, a character he had played on stage.  He co-stars with Mabel Normand, in a film he directed, during his last months at Mack Sennett’s Keystone Studios.  Mabel Normand was herself a big comedy star, who also became a writer and director, mentoring Chaplin when he began at Keystone, and acting with him in a dozen films.  The automobile race is the excuse for the company decamping to the racetrack.  Perhaps, Sennett had a car entered in the race (he often did) and the company was admitted to shoot as free publicity for the track. It’s not a sophisticated film, and was likely shot in a day or two (Chaplin’s previous film was released October 26, 1914, and this one on October 29, 1914).  All the predictable kicks in the rear end, soda bottle spritz attacks and war with the police are already in place.  It’s worth noting that, before WW I when this film was made, was a much more polite era, think Downton Abbey.  The hostility of the Keystone comedy characters must have been shocking in this Edwardian context.  Also note Chester Conklin as Mable’s beau and big Max Swain as Chaplin’s nemesis. 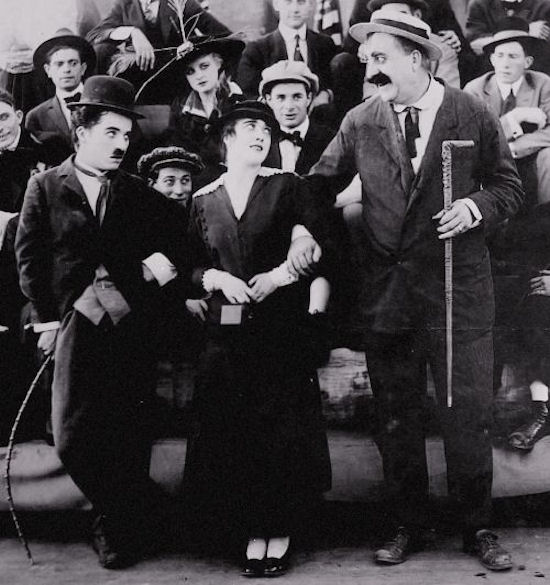 Larry Semon is a largely forgotten name today, the son of a stage magician, Zera the Great, and his assistant.  Semon was a cartoonist when he was picked by Vitagraph to be a star comedian.  He had a surrealist bent, was a great acrobat and loved playing with camera tricks, as you’ll see here in an early lizard gag.  He wrote and directed this frantic film, The Bell Hop, himself.  His most famous movie was a 1925 version of The Wizard of Oz, with himself as the Scarecrow and Oliver Hardy as the Tin Man. This film has spilled ink, splashed paint, water geysers, drag, a saucy maid who is a secret agent, dynamite and biplanes.  The desk clerk under all the facial shrubbery is Oliver Hardy, billed as “Babe” long before he met Laurel.  In 1928, Semon either died of tuberculosis at the age of 39, or staged his own death to escape his creditors.  His death remains a mystery, as his comedy career is to many today. 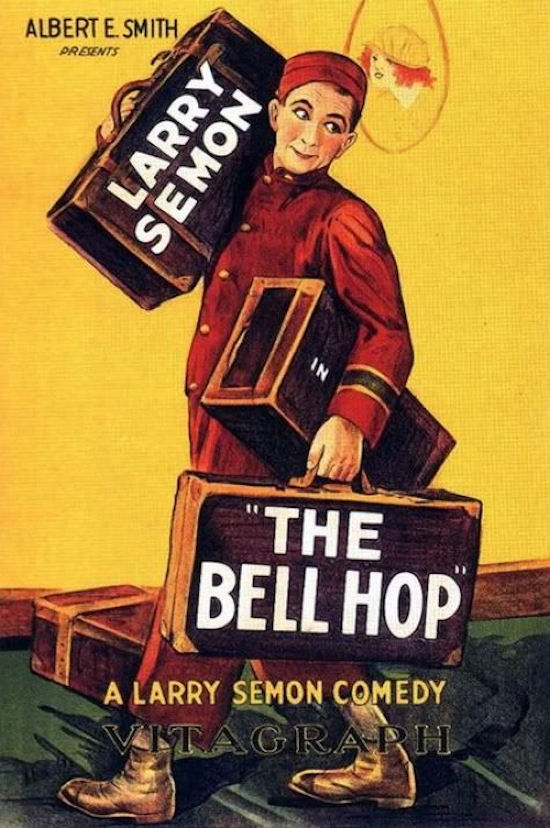 Many of us remember the sound Little Rascals shorts from our childhood, in which a diverse group of kid pals had unsupervised adventures.  But the series began in the silent era, Dogs of War includes a cameo from a famous silent comedy star. The film begins with Our Gang reenacting WW I with vegetables, and then switches to the havoc they create in the Hal Roach  film studio. This was an era when WW I was being reflected on the silent screen, and Our Gang essentially does a parody of a serious war film.   Joe Cobb, Jackie Condon, Micky Daniels, Allen “Farina” Hoskins and Mary Kornman sometimes played roles in these comedies later, as teens, or the parents of the Little Rascals in the 1930s films that used to show on tv. 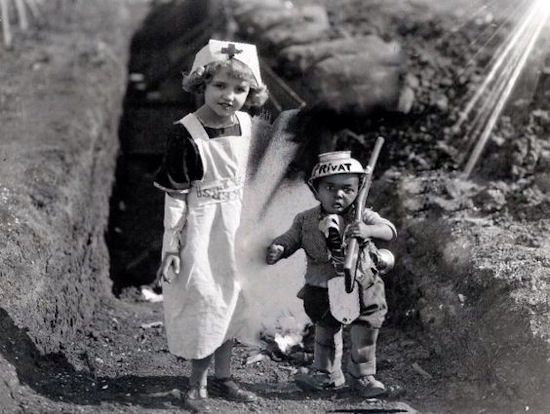 Laurel and Hardy should need no introduction.  They are children in adult bodies, who create chaos and confusion wherever they go.  In Big Business they are Christmas tree salesmen in sunny California.  There is a story that they bought a bungalow and its contents at 10281 Dunleer Drive, in Cheviot Hills, and destroyed it.  Supposedly producer Hal Roach arrived at the location the next day, and discovered his troupe had mistakenly destroyed the house next door, although Laurel denied that story in later years.  In my one trip to LA, I made my family drive by this real life house so I could take its picture.  This is one of their last silent films, and was co-directed by Leo McCarey, who would go on to direct such comic gems as Duck Soup, with the Marx Brothers, and The Awful Truth with Cary Grant and Irene Dunne. 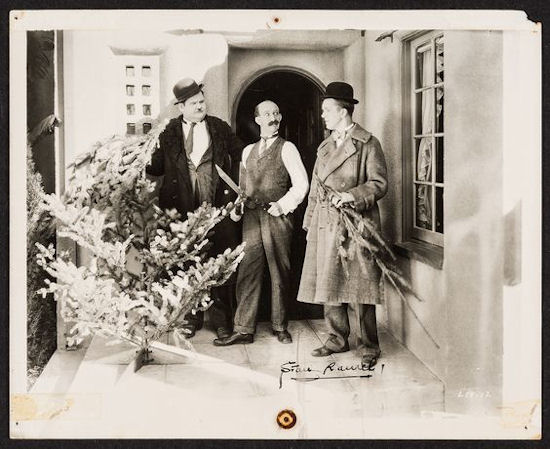 I’ve saved Dog Shy for last.  Charley Chase is also relatively unknown today, but he is not the acrobatic  clown that other comedians here are.  His gift was for situation comedy, embarrassing mishaps and mistaken identity; many of the formulas of domestic movie and tv comedy can trace their roots back to him. He began at the Keystone studio, both acting and directing, later moving to the other big comedy studio, Hal Roach, where he directed, until he began starring in his own series of comedies starting in 1923.  He’s not funny looking, like other character comedians, and could pass for a leading man in a serious film, if necessary.  His gags are incredibly inventive; there is one here that is a sound joke in a silent film.  This one, too, was directed by Leo McCarey.  This film, about a man afraid of dogs, is nearly stolen by a dog, the peerless Buddy. 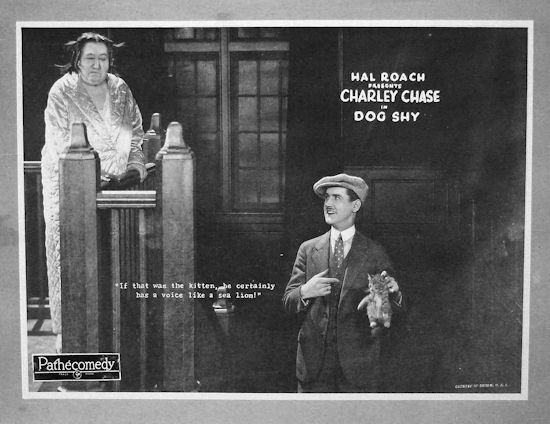 The audience at the North Carolina Museum of Art roared with laughter during these comedies. It was really gratifying for a programmer like me. In Dog Shy when the mother tells Charley to “Give the Duke a bath,” the reaction was deafening. Any comedian today would kill for a killer laugh like that.

Ethan Uslan, our esteemed pianist tonight, is a ragtime/jazz pianist based in Charlotte, North Carolina. He is a 3-time winner of the World Championship Old-Time Piano Playing Contest (check You Tube) and has performed all over the USA, Europe, and Cyberspace, where his jazzed-up Für Elise has gone viral.

Comedy is a Man in Trouble by Alan Dale, A-Z of Silent Film Comedy by Glenn Mitchell, Following the Comedy Trail by Leon Smith.