Comedy styles have changed a lot since Laurel and Hardy were in their heyday. Yet, there is something about their movies that never ages. Their comic personas are evenly balanced (one is not a straight man for the other) and their stubbornly child-like screen characters continue to provoke laughter. I showed a Laurel and Hardy comedy short before a feature at the NC Museum of Art several years ago and a little girl, perhaps 4 or 5 years old, laughed so hard that her father clapped his hand over her mouth, afraid she was disturbing the rest of the audience.

Stan Laurel (the thin one) and Oliver Hardy (the fat one) were in many films separately before they became a comedy team. Laurel was born Arthur Stanley Jefferson into a theatrical family in Lancashire, England, and made his stage debut at 16. He dropped his first name to distinguish himself from his father, who was also an Arthur, and later changed his last name, too, because Stan Jefferson contained an unlucky 13 letters. He joined Fred Karno’s famous comedy troupe and toured England and America with them during the teens, where he was Charlie Chaplin’s roommate and understudy. After one of Karno’s American tours, Laurel stayed behind and began a solo career in vaudeville, often as a Chaplin imitator. He made 76 films, beginning in 1917, before being teamed with Oliver Hardy. He was the star comedian in some of these early films, sometimes parodying popular films of the day. In “Mud and Sand” he played a character named Rhubarb Vaselino, modeled on Latin Lover Rudolph Valentino and one of his hit films, Blood and Sand. In 1926 Laurel signed a long-term contract with the Hal Roach Studio and in that year was costarred in the first of his comedies with Hardy. At first, they were simply in the same movie together, not a comedy team, and they did not play their familiar characters. In an early outing, “Putting Pants on Phillip” critic Charles Barr noted that in retrospect there was “something fateful and allegorical about the film, as Oliver Hardy’s dignified gentleman from the American South awaits the arrival of a ‘relation’ from Britain, who will in no time transform his life” (Sinyard).

Oliver Norvell Hardy hailed from Harlem, Georgia, and began his career as a boy singer at the age of 8. He appeared on stage and in a singing act which toured the South, and eventually enrolled at the University of Georgia, intending (although perhaps none too seriously) to become a lawyer. In 1910 he bolted from college, opening the first movie theater in Millegeville, GA, and three years later joined a small movie company in Florida playing comic villains, a role for which his physique well suited him. He, too, acted in many films, often billed as Norvell or Babe Hardy, his nickname, before fate brought him to the Hal Roach Studio and his partnership with Stan Laurel. Director Leo McCarey, Production Supervisor at the studio in the 1920s, claimed he was the person who created the comedy team and helped them hone their comedy style to perfection. Their contrasting appearances and established comic characters would serve them well for 30 years, in more then 100 films, mostly shorts, but also 27 features. Their comedies were based strongly on character and not on plot. “We had fun and we did a lot of crazy things in our pictures, but we were always real,” said Hardy (Sinyard).

Laurel and Hardy’s funny faces and funny bodies provide both a contrast and a background for their deft physical comedy. Some, like “Big Business” and “Leave ‘Em Laughing” are among the funniest examples of the form. Neil Sinyard explains their appeal as an “absence of malice, which makes them sympathetic, and their absence of intelligence, which makes them hilarious.” At the same time, they are extremely dignified, no matter what indignities they are suffering. They introduce themselves as Mr. Laurel and Mr. Hardy, and are always properly topped off in their derby hats. And, because they are both equally funny, each joke has three payoffs, first the situation, when one reacts and then the other. As Gerald Mast points out, the starting point for all their films is that they are overgrown children (how they ever got married in the first place in Sons of the Desert is a mystery). And, in their world, many other people are equally childish. The measured pace of Laurel and Hardy’s films are unique, as they go about their destructive behavior with a deliberate slowness that builds to a satisfying climax, a specialty of Leo McCarey and the Roach Studio comedy technique. It was no secret that Laurel was the comedy brain behind the partnership, in fact, Hardy did not even think he was funny. His taking everything that happens to the pair so seriously is one of their comedy secrets. Luckily for them, their voices enhanced their screen characters, unlike so many silent comedians who found it difficult to make the transition to sound films because of their incongruous voices. Laurel’s English accent and Hardy’s Georgia drawl provided yet another comic contrast.

In Sons of the Desert, Stan and Ollie sneak off to a lodge convention after convincing their wives they are taking a trip to benefit Ollie’s ill health. Director William Seiter, a former Keystone Kop and expert comedy director, shot the film in three weeks, in order, with minimal rehearsal and little ad-libbing. The biggest obstacle was to find a place to film the Chicago parade, without going to Chicago. The Roach back lot had a New York street, which was modified at a cost of $25,000 in 10 days with 4 crews working around the clock. This huge expense for the tiny studio indicated the importance of both the set and the status of the production. Laurel and Hardy were big moneymakers for the studio. Seiter was concerned that many in the audience who would see the film would know what happened in lodge meetings, even if he and his stars did not. So, after taking notes from a general meeting of cast and crew on the subject, the director and his stars attended a real lodge meeting to soak up the atmosphere.

Charley Chase plays an obnoxious lodge brother, a loud mouth who delights in the discomfort and humiliation of his victims. This character was quite unlike the one he played in a long series of silent and sound comedies under his own name for Hal Roach. Chase was the most important star for the studio during the 1920s, playing an ordinary fellow beset by a plague of various domestic mishaps; his silent films were prototypes of what we would now call situation comedies. Not a gifted physical comedian, he perfected a kind of comic irritation. He was also a comedy writer and director (using his real name, Charles Parrott) who had been working in the movies since 1912. Leo McCarey said that Chase taught him everything he knew about film-making. Chase’s worsening alcoholism resulted in his declining career as the 1930s progressed, and he died of a heart attack at the age of 47 in 1940. Among his later credits, he directed short comedies for the Three Stooges. Considered by some to be among the most underappreciated of the silent era comedy geniuses, Chase has many devoted fans amongst comedy aficionados.

Laurel and Hardy often waged comic war against their on-screen spouses, played here by Mae Busch and Dorothy Christie. Ironically, at the time both comedians were having marital problems at home, and one can only speculate if that fueled some of the comic energy. They were often the victims of hen-pecking on the screen. One of funniest examples of this is the silent comedy “We Faw Down.” In this short film, Laurel and Hardy have been innocently lured into a goodtime girl’s flat and their wives are in hot pursuit. The wives chase them between two apartment buildings and fire a gun, at which point numerous men jump out of all the different apartment windows, pulling on their pants. There is plenty of drinking on display in Sons of the Desert, since Prohibition had just been repealed. And, since it would still a year before the censorious Production Code came in to further tame Hollywood movies, there is the comic benefit of that, as well. The “Honolulu Babies” are scantily clad cuties; the Production Code would not only ban cleavage, but any “breast movement,” well in evidence here. And, when Mae Bush says contemptuously, “Son of the…Desert” note her pause would be verboten less than a year later.

There was no real lodge with the name Sons of the Desert, at least until Laurel and Hardy’s biographer, John McCabe, began a fan club for them with this name. This fan club is still quite active, they recently (Summer 2004) had a convention in Columbus OH and there are many branches of it all over the world. Museums dedicated to Laurel and Hardy were established in each of their home towns, as well. Sons of the Desert, the best of Laurel and Hardy’s feature films, continues to be a rallying point for their fans the world over. 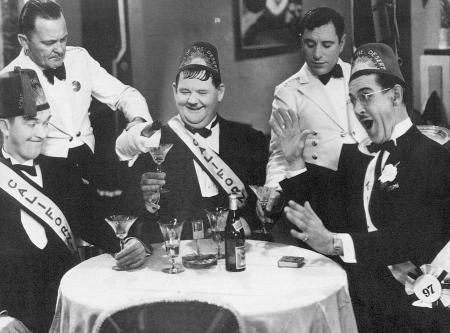 (Photo from Neil Sinyard, Classic Movie Comedians. Sources include: Sinyard, Stan and Ollie by Simon Louvish, The Comic Mind by Gerald Mast, Mr. Laurel and Mr. Hardy by John McCabe, Who the Devil Made It? by Peter Bogdanovich, A-Z of Silent Film Comedy by Glenn Mitchell).