Lubitsch applies his naughty touch to a sexual roundelay, as two sophisticated, straying couples flirt their way towards a mammoth dance contest, “a good-natured send-up of sheikhs, jazz babies and would-be wife swappers, replete with binge drinking, outrageous Freudian symbolism and a writhing kaleidoscope that must be the ultimate Charleston scene.” (J Hoberman NY Times). 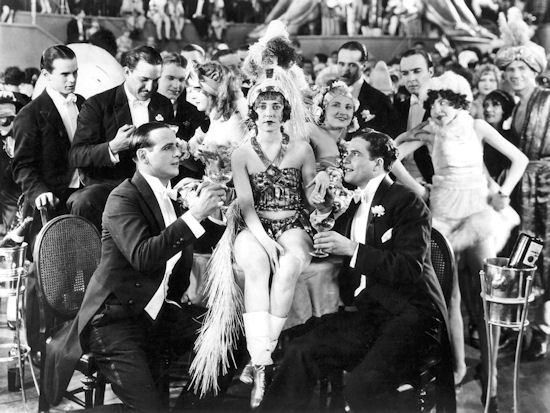 Sex comedies were not a major genre of American film in the 1920s.  Cecil B. DeMille had done a series of frothy romps with names like Why Change Your Wife? Don’t Change Your Husband and Male and Female, and Charles Chaplin’s least profitable film had been a sophisticated look at A Woman of Paris.  But, by and large, these plots were considered to be more “European.”  That’s why Mary Pickford had wanted Ernst Lubitsch, already a veteran of sensuous films about Carmen and Madam DuBarry in Germany, to direct her in a “grown-up” film, Rosita, and brought him to Hollywood.  Lubitsch jostled for his place in a more conservative film culture.  Especially, since Lubitsch’s films about the boredom of married life didn’t necessarily end with marital order restored in the Hollywood style.  The film is based on an 1872 stage play, by Henri Meilhac and Ludovic Halevy called Le Reveillon, and no doubt extensively revised by Lubitsch and his nominal screenwriter Hans Kraly. 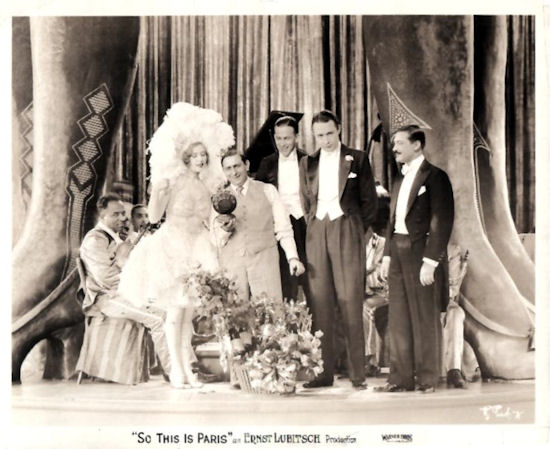 Lubitsch in center of photo, not in evening clothes.

Monte Blue began his career in the teens with D.W. Griffith, as a script clerk, actor and stunt performer.  He was supposedly part Cherokee, although born in Indianapolis IN.  He was raised in an orphanage after his father died in an accident.  He played football, and so had the physique for his odd jobs as miner, cowhand, seaman, and circus bareback rider. Usually cast as a romantic leading man, he had some big parts in the silent era, in DeMille’s Affairs of Anatol and as the evil Danton in Griffith’s Orphans of the Storm, but his greatest fame came with the comedies he did for Lubitsch in the 20s, like this one. Champion Charleston dancer George Bowe’s feet doubled for Blue’s.  After losing everything in the 1929 crash, he continued working in movies, and then tv, his entire life; his career stretched from The Birth of a Nation in 1915, to the Rawhide tv series in 1960. He died in 1963. 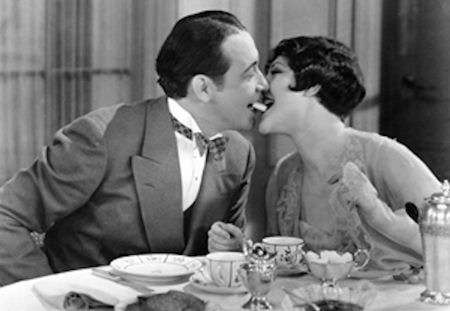 Patsy Ruth Miller was the top female star at Warner Brothers in the mid-1920s.  Stage struck from childhood, a chance meeting on a California vacation with the actress Nazimova resulted in a bit part for Miller in her current project, Camille, with the still unknown Rudolph Valentino. She was chosen a WAMPAS Baby Star in 1922, and her career grew, until at the age of 18 she played Esmeralda in Lon Chaney’s The Hunchback of Notre Dame.  She co-starred several times with Monte Blue, “I got along beautifully with Monte, and I think he enjoyed working with me.  He wasn’t a great actor at all, and never even pretended to be.  He was just a cute comedian” (Drew 148).  She said So This is Paris was different, “That wasn’t the same kind of comedy, It was a sophisticated comedy.  I think Ernst Lubitsch was the finest director I ever worked for” (Drew 148). She remembered that there was “no kidding” on the set. ..the whole film was visualized in his head, so he wasn’t very flexible.  He didn’t want you going off the beaten track with a gesture if it wasn’t what he had in mind” (Eyman 119).  Watch for Myrna Loy who appears briefly as a maid.  He was very specific exactly HOW she was to knock on a door.  Miller said that he warmed up to her enough to give her some personal advice, “You must take care of your money.  You must save your money.  You must always have enough money.” Why? “Because then you don’t have to be nice to anyone you don’t like” (Eyman 119).  “I just enjoyed myself” she recalled in 1983, I thought being an actress was terrific.  I loved Hollywood, and I had a happy home life, so I’m not a good one to ask” (Drew 153).

From a 1920s Chicago scrapbook

Lilyan Tashman was the youngest daughter of an Orthodox Jewish tailor from Brooklyn.  She went on the stage at 17 to support her family, and was not averse to showing her legs to Florenz Ziegfeld for a chance at the 1916 Follies.  She loved the risqué life of Jazz Age Broadway, “Sables, Rollses, leases flood in and may be had for the choosing” she said (Mann 113).  In 1925, she married Edmund Lowe.  They were “free lovers of the Greenwich Village type” both gay, but genuinely fond of one another, and they moved to Hollywood.  “Sparkling, witty fun, they were the hosts of screenland’s most fabulous soirees” and the fan magazines reported they were “supremely happy in a town where most marriages are just one long tug of war” (Mann 116).  She was a glamorous cinema fashion plate, and her chic, feminine style was fan magazine catnip. I love her in 1931’s Girls About Town.  In 1934, she was stricken with stomach cancer.  Only 37 years old, she died with her husband holding her hand.  She had an Orthodox Jewish funeral in Brooklyn; a crush of 10,000 mostly female fans mobbed the cemetery to say farewell.

George Beranger was born in Sydney, Australia, of German heritage.  His mother committed suicide when he was three, and he left home, like his older brothers did, at 14.  He trouped with the Walter Bentley Players in Sydney, and followed them to Vancouver, BC, in 1912.   On the boat he reinvented himself as a Frenchman, Andre de Beranger. He, too worked for DW Griffith, he was both an assistant director and played a small part in The Birth of a Nation. His career flourished after World War I, he made 40 films and enough money to build a hacienda in Laguna Beach and maintain a Paris apartment. “But comedy was his forte, particularly the role of the ardent but unlucky lover” (Cosgrove).  His career foundered in the talkie era, he screened silent films from his own collection alone in his room at the Hollywood Athletic Club.  He lived in a small house at the beach, which is where he was found in 1973, dead, surrounded by mementos of a long vanished career. 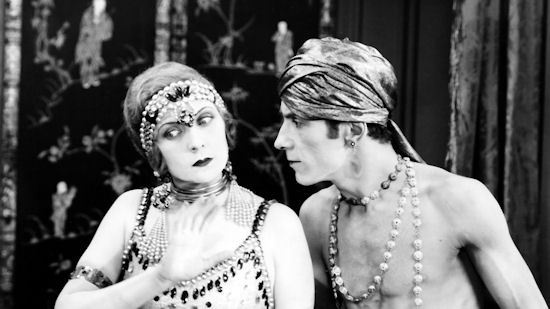 So This Is Paris was filmed from March to May of 1926.  Usually WB films were shot in a quick 4 weeks, but Lubitsch’s took twice as long.  He didn’t shoot a lot of takes, editing the film in the camera, much like Alfred Hitchcock.  After extensive rehearsals were satisfactory he would announce “This is the picture” meaning he was ready to start shooting.

In 1924, Warner Brothers top grossing star was Rin Tin Tin.  Lubitsch was a prestigious acquisition for the studio, under contract, he made five films for them in two years.  Warners was gearing up to introduce sound to motion pictures, and Lubitsch’s films had been a financial disappointment. The director in his turn was dissatisfied both with the technical resources and the contract actors he was forced to cast.  He induced them to borrow Lilyan Tashman from another studio for the other woman.  Harry Warner thought he would be directing a spectacle for them, like he had in Europe, “You have picked your own stories and made your own pictures without interference but made them too subtle the world wants thrill and excitement” he telegraphed (Eyman116).
They essentially dumped this film, his last for the studio, into a small theater in the heat of summer (of course, there was no air conditioning at the time).  Variety was puzzled, “A corking comedy that should have been held back until the season” they thought.  The film cost $253,000 and only grossed $310,000 in the US.  They had hoped at least that Lubitsch’s pictures would be popular overseas, but European audiences didn’t think Hollywood films nearly as naughty as Americans did.   Lubitsch was more than ready to move on.  His contract was bought out jointly by MGM and Paramount, and he did not look back (Thompson 27). 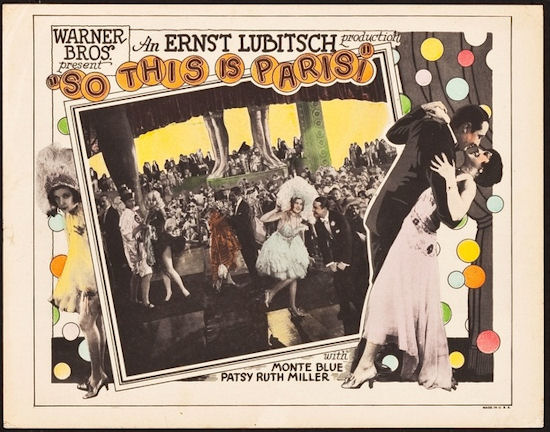 The spectacular art direction was by Harold Grieve.  “Lubitsch was a very good person.  If he trusted you, and he liked you, he’d let you do your job.  I would bring him my sketches, he’d approve them, and that was that” (Eyman 112). 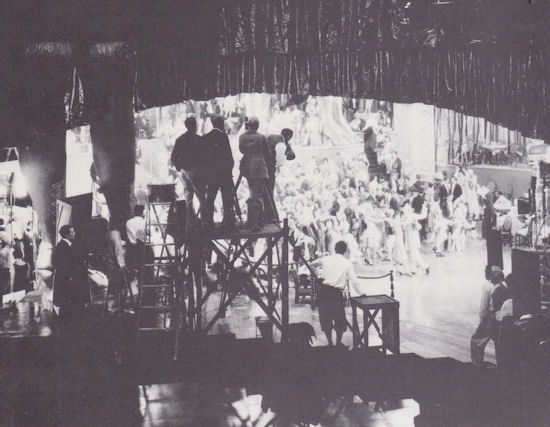 The caption reads: Ernst Lubitsch (with megaphone) directs one of his social satires SO THIS IS PARIS (1926). This famous German director, working in Hollywood, bit deep into contemporary foibles. Here he guides the Charleston contest sequence, in which the chorus of two musical shows then playing on the stage in Hollywood particpated.

The drunken party scene was singled out by reviewers for its novelty and innovation.  The New York Times wrote, “In So This is Paris, his tour de force is an extraordinarily brilliant conception of an eye full of a Charleston contest, with vibrant kaleidoscopic changes from feet and figures to omnipotent saxophones.  This dazzling episode is like the dream of a man drinking more than his share of wine at such an event.  The comedy in this film had, up to that time, kept the audience in constant explosions of laughter, but the startling dissolving scenic effects and varied shots elicited a hearty round of applause (Thompson 122). Another reviewer remarked that the response was particularly notable as it was the hottest night of the summer.

“The fine scorn that Herr Ernst Lubitsch has for the institution of sex deserves at least rapturous contemplation.  All the rest of the world, as need hardly add, is violently excited over the significance of the sex urge.  Psychoanalysts dissect it, reformers assail it, and the younger generation, of all ages, rejoices in it—but all of them in their several ways take it with infernal seriousness.  Meanwhile, the brilliant German sits back calmly and laughs contemptuously at the antics it causes…Now in his latest pictures, So This is Paris, he ends his reticence on the subject and begins to laugh out loud” (Weinberg 85).  And perhaps, with all the pages devoted to its explanation, that is the best of all definitions of The Lubitsch Touch, a refusal to take sex seriously.

This film is one of the “American Film Classics” that toured nationally with an American Film Institute show in the 70s.  But this print is new, having been only screened a couple of times before our show tonight. The audience laughed uproariously at the comedy, and jumped to their feet to give David Drazin, whose jazzy improvised score brought joy to the evening, a standing ovation. The film is not well known, but was thoroughly enjoyed by all at the NCMA. 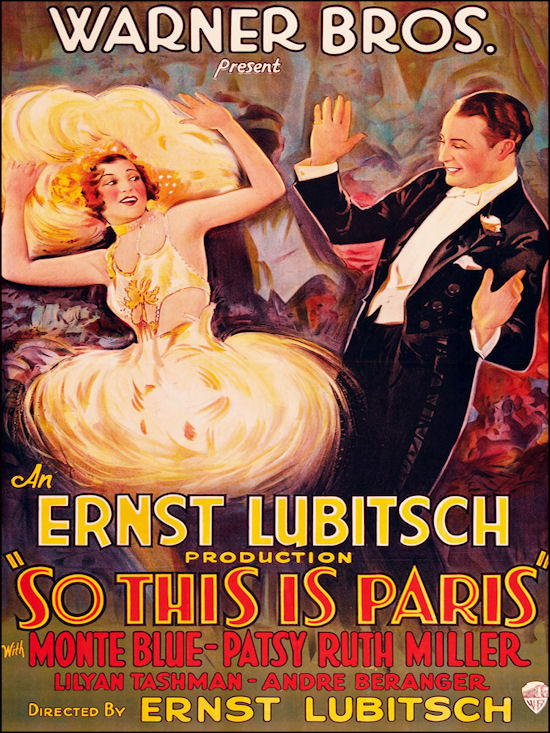 The Lubitsch Touch by Herman J. Weinberg, Ernst Lubitsch: Laughter in Paradise by Scottt Eyman, The Cinema of Ernst Lubitsch by Leland A. Poague, Ernst Lubitsch: A Guide to References and Resources by Robert Carringer and Barry Sabath. Herr Lubitsch Goes to Hollywood by Kristin Thompson, Passions and Deceptions: The Early Films of Ernst Lubitsch by Sabine Hake, Behind the Screen by William J. Mann, Speaking of Silents by William M. Drew, Films in Review, May 1963 (p 313) and October 1963 (p. 508) http://www.brisbanetimes.com.au/entertainment/movies/the-stuff-of-silent-legend-20120302-1u7jf/, on set photo from Spellbound in Darkness by George C. Pratt.