This is the second golden age of silent film. The first lasted until roughly 1930, when the last of the local Bijous scraped together enough money to convert their theaters to sound. This recent era, which began about 15 years ago, also uses pristine prints and live music to create an unforgettable multi-media collaboration between artists and audience. The pre-1930 scores may have been provided by theater organ, grand piano, café orchestra or full symphony. Modern scores encompass these styles and many others, ethnic, avant garde, rock, country and ensembles not so easily pigeon-holed like The Alloy Orchestra. Alloy provides an exemplary fusion experience, bringing an iconoclastic sensibility to their accompaniment of silent film classics. State of the art electronica as well as their “rack of junk,” musical saws and everything in between contribute to the magnificent quirkiness of their scores. Terry Donahue (percussion, musical saw, accordion), Ken Winokur (percussion and clarinet) and Roger C. Miller (synthesizer) are brilliant musicians uniquely simpatico to the spirit of the silent era. They bring with them a gorgeous print made from Speedy’s original negative, courtesy of the Harold Lloyd estate.

Harold Lloyd lent his nickname, “Speedy”, to his final silent film. The on-screen go-getting boy next door character is, in fact, much like the real Lloyd. He’s optimistic and determined, with a natural athleticism. The plot pits a greedy railway conglomerate against our hero and Pop Dillon’s modest business, the last horse drawn trolley in New York. Fast-paced and packed with gags, Speedy is both stylish and sweet, photographed on location in the NYC of nearly 70 years ago. Thousands of New Yorkers watched Lloyd film in the city, causing delays which tripled the original month-long shooting schedule. The lengthiest sequence was shot in Coney Island’s Luna Park, but you’ll also see the Plaza Hotel, the Queensboro and Brooklyn Bridges, Wall Street, Times Square, Yankee Stadium, Greenwich Village and Central Park.

The final chase, as Speedy’s horse car weaves precariously through teeming urban traffic, is among the most thrilling in movie history. A terrifying—and unscheduled—wreck occurred on Third Avenue when the horse car collided with one of the massive supports for the elevated railway. Neither horse nor driver was injured and the footage was so remarkable the sequence was rewritten to accommodate the incident. As Jeffrey Vance writes in Harold Lloyd: Master Comedian, “One can never overstate how much grueling work went into filming these silent feature-length comedies, and must marvel at the quick minds involved that could turn a mistake on location into a great comedy sequence.”

Today, the titans of silent film comedy are considered to be Charles Chaplin and Buster Keaton with Lloyd a distant third. But in the twenties, Lloyd’s popularity commanded second place in the comedy triumvirate. He made more silent features than either Chaplin or Keaton, and controlled the rights to his films. After his heyday, he feared his movies would be ridiculed and kept them out of release. Consequently, he was remembered primarily by one film, Safety Last, and the iconic image of him dangling from a skyscraper’s clock face. His granddaughter, Suzanne Lloyd, has dedicated herself to restoring Harold Lloyd’s place in the pantheon with events like the one tonight. 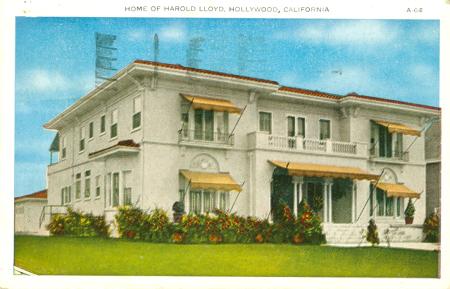 A souvenir postcard of Lloyd’s home from the 1920s

Movie comedies are best when the laughter is shared. Live music by superb composer/musicians like the Alloy Orchestra add exciting vitality. Those unfamiliar with silent films are often surprised by their cleverness and sophistication; they seem new again. One little boy quoted in the Los Angeles Times said of silent comedies, “All the jokes in movies we see now are kind of the same. These were all different.” 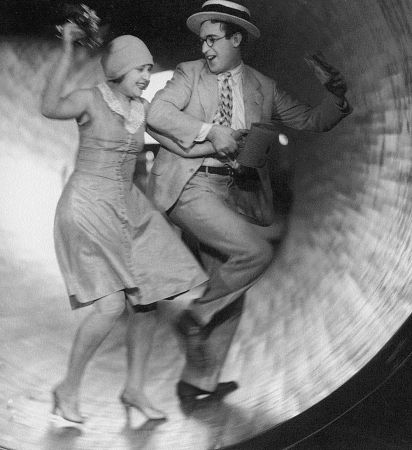