Atterbury Dodd is a stuffy New York banker, sent to Hollywood from Wall Street to straighten out the tangled finances of Colossal Studios. Crossing paths with a peppy former child star, he learns that people’s lives don’t always fit between the lines on a spread sheet. “Bogie is surprisingly funny in his first comedic role, and Blondell is, as always, sassy and smart” (The Discerning Film Lover’s Guide).

This is a movie I have loved for a long time.  It used to play on Cleveland tv a lot when I was growing up.  It has one of my favorite plots, the milquetoast becomes a hero.  And, this film is really the reason I loved Leslie Howard; in fact it’s hard for me to think of another film I liked him in as well.

Usually behind the screen exposes deal with the creative part of movie making, the actors, writers and directors.  Stand-In is one of the few films that reveal the economics of Hollywood, albeit in a comedic fashion.  Atterbury Dodd is the Nate Silver of Tinsel Town accounting; he convinces his Wall Street bosses that cinematic success can be accomplished by number crunching.  It was inspired by actual Depression era events, when the businessmen behind studio financing sent representatives to both Fox and Paramount to make them profitable again after the crash of 1929.  It also acknowledges one topic Hollywood was loathe to discuss, the union troubles roiling the back lots, the Screen Writers Guild was reactivated, the Screen Actors Guild was formed, and the Alliance of Theatrical Stage Employees and Motion Picture Operators succeeded in getting a contract with the studios, in spite of the moguls resistance to unionization. 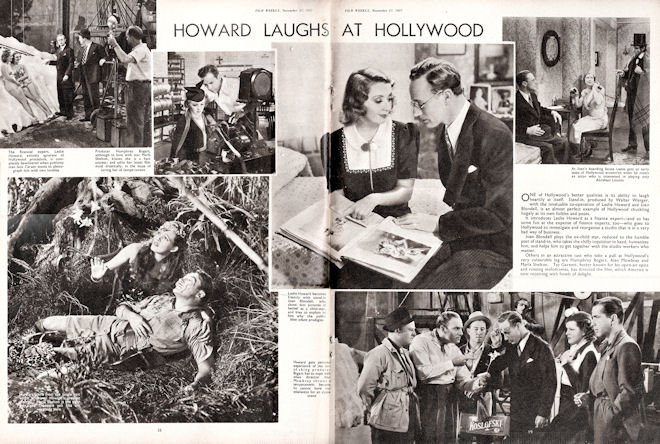 Although the title of the film seems to refer directly to Lester Plum played by Joan Blondell, the stand-in for Thelma Cheri, the star, there are many stand-ins in the plot.  Dodd is standing in for his Wall Street firm, Lester stands in as Dodd’s secretary.  Other character will swap roles as the story progresses.
Bogart’s biographer, Jeffrey Meyers, calls Stand In “the greatest unknown Bogart film—clever, campy, witty—a rare treat for those lucky enough to see it” (Meyers 72).  Although Bogart was already on his tough guy career trajectory, this film hearkens back to the kind of light comic roles he played on Broadway.  He toys with a tennis racquet, wryly acknowledging the days when he would bound on stage in his sporty whites, asking, “tennis, anyone?”  Tay Garnett, started out writing gags and directing comic shorts in the silent era, but he’s best known for the steamy Lana Turner-John Garfield The Postman Always Rings Twice.  He, too, seems to enjoy taking a swing at comedy again.  He shot it in six quick weeks in the summer of 1937. 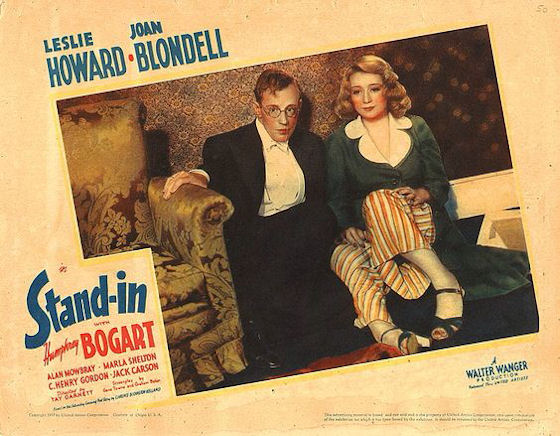 As Meyers says, it takes a dig at “New York executives and Hollywood producers, financial skullduggery and exploitation of employees, arrogant studio heads and autocratic directors, Tarzan pictures and morals clauses, previews and script changes, waste and incompetence, alcoholic decline and sexual corruption” (ibid.)  It also contains quite a sharp political message.  Quite a full plate for a comedy!

The film’s respect for the hard workers behind the scenes of the dream factory has its origin in the story penned by Clarence Budington Kelland, who also wrote Frank Capra’s populist fable, Mr. Deeds Goes to Town.  In this era, most films about Hollywood were about disillusionment, like What Price Hollywood?, and A Star is Born, it was meant to be a tantalizing inside story, or as we might say now, a “making of.”  Joan Blondell is a superb comic foil for the fussy Leslie Howard and she enjoyed working on the film.  She’s worked with Bogart before, at Warner Brothers, but was not charmed by him.  “He wasn’t a man one ever felt close to—nobody did.  But, I liked him” (Kennedy 85).

Leslie Howard Steiner was born in 1893.  His father was Hungarian, a pianist, who met his mother in England when he accompanied her singing.  The family moved back to Vienna, where his father had fond memories of study, and Leslie lived there between the ages of 5 and 10, at the height of the city’s fin de siècle brilliance, until anti-Semitism drove them back to England.  His school days were undistinguished, but his interest in drama was encouraged.  He was in the cavalry in WW I between 1914 and 1916, and received a medical discharge for “neurasthenia” likely meaning shell shock, or as we say now, PTSD. The lack of leading men allowed his career as an actor to progress quickly from amateur to professional, he was handsome, with a beautiful voice, and confidence in his talent.  His goal was to be THE matinee idol of the stage, which he did first in London, and then New York, playing the lead in many famous plays of the day, including Her Cardboard Lover, Outward Bound, Berkeley Square, and when the talkies came in, and stage stars flocked to Hollywood, he migrated, as well. 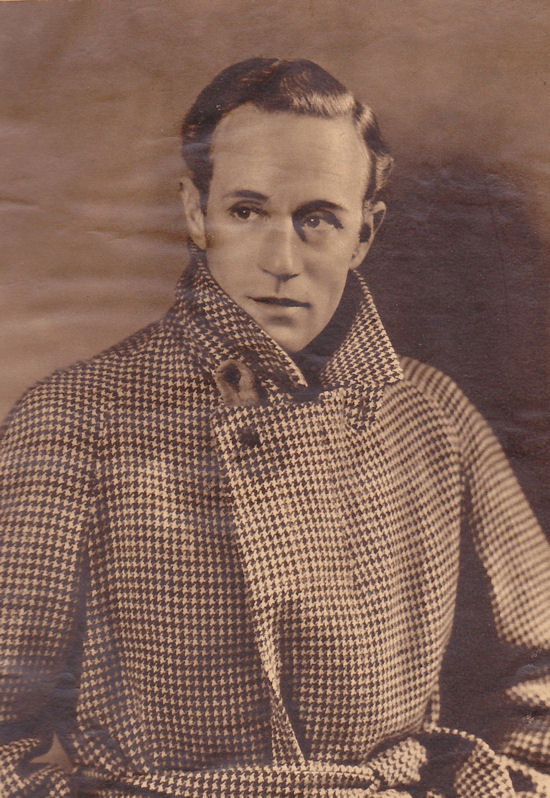 This is from one of my movie star scrapbooks.

Interestingly, Howard’s biographer brushes off this film as slightly embarrassing.  It’s true, his usual forte was romantic melodrama, in films like Of Human Bondage, Romeo and Juliet (opposite Norma Shearer), Intermezzo (which introduced Ingrid Bergman to American cinema), or mildly swashbuckling in The Scarlet Pimpernel, and of course, Ashley Wilkes in Gone With the Wind. 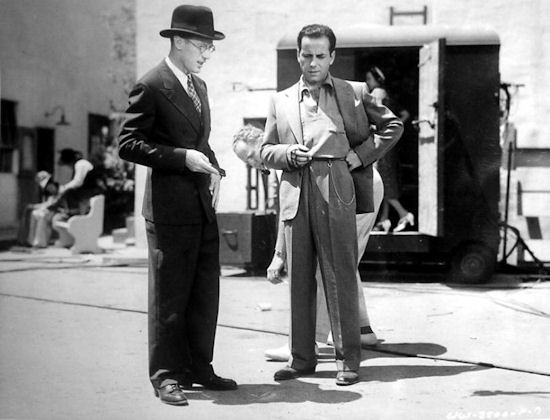 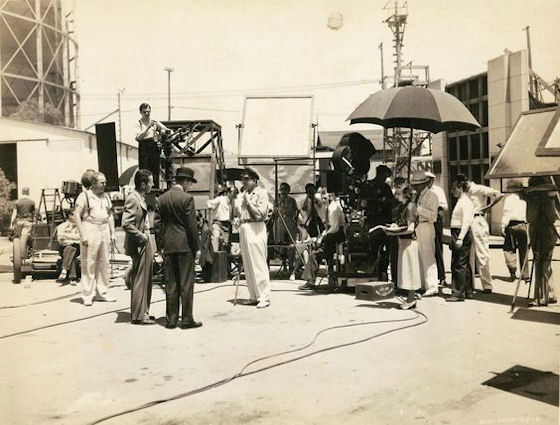 Reverse shot! Very interesting to me!

Joan Blondell was born in a trunk, as different from Leslie Howard as Lester is from Atterbury. She made her first appearance on stage in the arms of her vaudevillian parents. Her youth was spent in perpetual touring with Ed Blondell and Company. At 17 she won a beauty contest in Dallas, TX. The $2000 prize helped her family exist in the era when vaudeville was being killed by the movies. She worked odd jobs during the day and acted for free at night, until Broadway beckoned. Her success in The Trial of Mary Dugan and then Penny Arcade led to Hollywood. She and James Cagney costarred in Penny Arcade, and arrived at Warners Brothers together. A couple of–at the time–more well-known actors, Grant Withers and Evelyn Knapp, were given the parts she and Cagney played on stage, and they were second leads. But, when the execs viewed the rushes, it was clear that the newcomers needed to be put under contract, pronto. The studio lobbied to change her name to Inez Holmes, but she refused, trembling that her small rebellion would lose the chance at a five year contract.  Everyone at Warners worked hard, in the early 1930s she made 27 films in 30 months. She was known as “one take Blondell” which stood her in good stead as she toiled in the Warners factory, “They’d even pan me going to the ladies’ room,” she said. Hence, the need for the Screen Actor’s Guild. The wise cracking babe was her specialty.   During her WB years, she worked ceaselessly as the studio demanded. In her eight years at Warners in the 1930s, she made 52 films.  Her long movie career, as her biographer observed, stretched from The Jazz Singer to Star Wars. 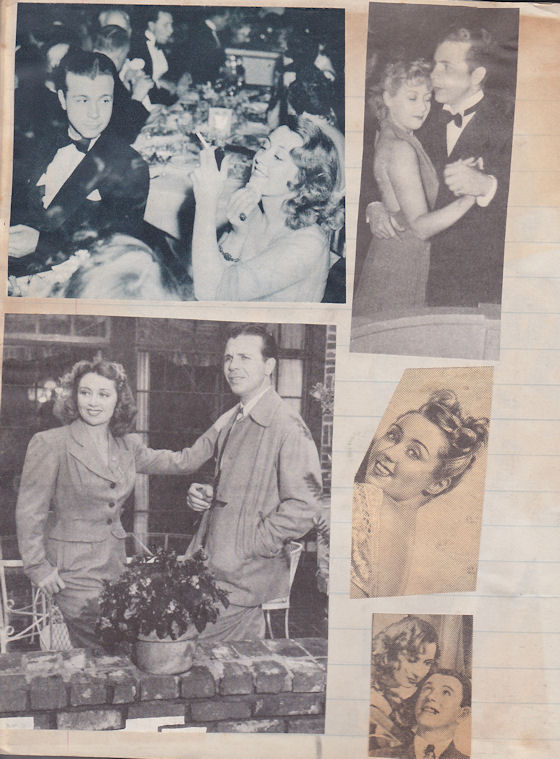 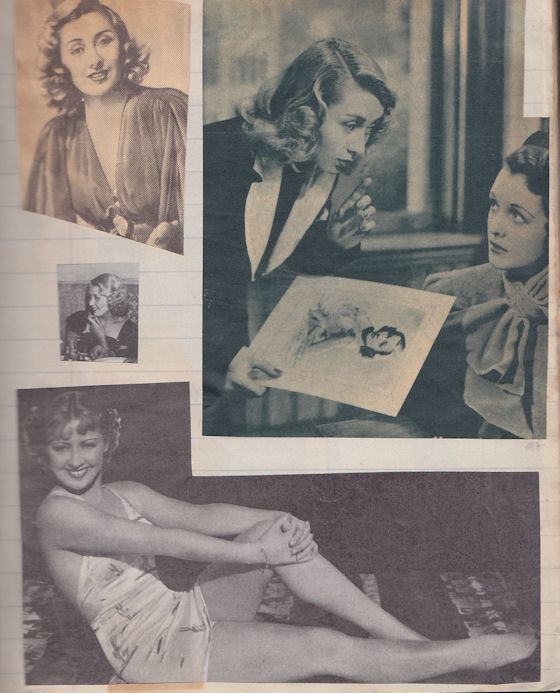 Here are a couple of pages from a movie star scrapbook I bought recently. Rather than pages from fan magazines, this one is newspaper pictures pasted into a school notebook. This fan didn’t have the fancy scrapbooks, or money for glossy magazines, as some other creators, but loved the movies just the same.

Howard and Bogart met during the Broadway run of Robert Sherwood’s The Petrified Forest.  Howard played Alan Squier, a penniless drifter, a poet and intellectual, who feels modern life is bankrupt, and he has lost the will to live.  He ends up in a dusty desert diner, the same time that a  gangster, Duke Mantee, arrives on the run from the law.  Alan has become fond of the dreamy waitress Gaby, who wants to escape and live a more joyous life; Alan signs over his insurance policy to Gaby and asks Duke (already guilty of murder) to shoot him so at least Gaby can have some financial resources and be happy.  The play was a huge hit for both Howard and Bogart, and when Warner Brothers bought the film rights, Howard said he would not revive his role as the lead unless Bogart was cast, his big break in films.  Bogart was so grateful, he named his daughter with Lauren Bacall, Leslie, after the man who had been so helpful in his career.

This film deserves to be much better known!  I’m so pleased to have located a print at the UNC School of the Arts Film Archive, which we will watch tonight. 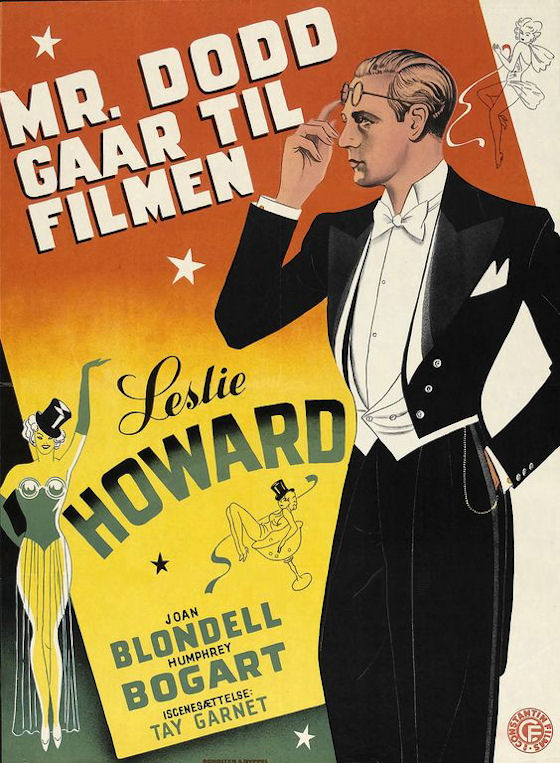 Movies About the Movies:  Hollywood Reflected by Christopher Ames, Bogart: A Life in Hollywood by Jeffrey Meyers, Joan Blondell: A Life Between Takes by Matthew Kennedy, Leslie Howard: The Lost Actor by Estel Eforgan.