Filmed on location in Western NC, with a largely non-professional cast, by D. W. Griffith’s brilliant cinematographer, Stark Love provides a documentary window into rural life of a century ago.  A rough mountain man works his wife to death, and compels a neighbor girl to take her place, while his son seethes with outrage and desire. “One of the little-known masterpieces of American film” (J.W. Williamson in Hillbillyland).

One of the fascinating aspects of old movies is the chance to view our 20th century world in accidental documentation.  There was even a whole film about this Los Angeles Plays Itself, in which clips were laboriously assembled to depict the city inadvertently caught on film. Stark Love is a superb example of this.  Karl Brown, who had been the cinematographer on many of DW Griffith’s films, directed his only feature in Graham County, NC.

Brown wanted to present a realistic glimpse into mountain life, using the movie camera; and he despised “rural nostalgia.” He wanted the film to be anti-pastoral. His goal was not to idealize rural life as several notable melodramas of the 1920s, like Tol’able David had done, but to show the hard life of the residents.  Instead, urban life, and the hero’s goal of an education at Berea College, was shown to be the romantic ideal.  “The log cabin in our collective heart, as far as Karl Brown was concerned, had made us mean” (Williamson 195).

The notion that Appalachian mountaineers were cut off from civilization was a product of romantic fiction, and the memoirs penned by teachers and missionaries, beginning in the 1880s, and continuing into the new century. Places that seemed impassable to visitors from the city, who then wrote of their experiences, were not considered  isolated by the people who lived in the mountains.  In order to find the lonely outpost of his imagination, Brown went to Graham County NC, near Big Santeetlah Creek, cleared of human habitation for a dam project. 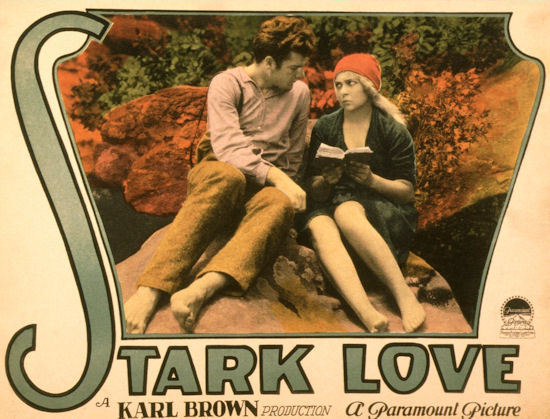 Brown became obsessed with a book he stumbled upon in an Asheville bookstore, Our Southern Highlanders, about the isolation of Appalachian mountain communities, published in 1913 by Horace Kephart.  Kephart lived nearby, in Bryson City, NC, and became his friend and consultant on the film.  He was a daily fixture on the movie set, and counselled Brown on mountain matters large and small.  Brown reverently kept a copy of this book, showing it to archivist Kevin Brownlow in the 1960s (Brownlow 502).  Kephart seems like quite a character.  He came to NC in 1903, a “highly educated, alcoholic denizen of research libraries, a world-travelled linguist and scholar who took an intense interest in touching his own personal truth through what he believe to be the pioneer savagery of the Great Smoky Mountains” (Williamson 199).  In other words, Kephart filled the role ofBrown’s informant, who doubled  as his soul mate.

Brown somehow managed to convince the Paramount executives to send him on a scouting trip with his camera, a business manager, and the counsel of Kephart.  They went to Robbinsville, the Graham County seat, and then to Nantahala Gorge, which you see in the opening shot of his film.  Of course, this does not at all represent where NC mountain people actually live.  He never found the isolated pioneers of his imagination, so he created them.

Perhaps, Paramount thought Brown could deliver a big Western epic, like The Covered Wagon, a huge hit, essentially the first big Western film, which he had photographed.  Paramount had even reverently presented a copy of the film to the Smithsonian, as if it was a real photographic record of history.  Brown said, “After the enormous success of The Covered Wagon, anything having to do with pioneers was money in the bank” (Williamson 191).  A long time Hollywood insider, Brown knew how to play the New York office against the LA office and gain approval for his passion project.

The studio panicked when they saw the documentary footage he had shot on his location scouting expedition, but he sold it to them as a docudrama, like Robert Flaherty’s Nanook of the North, or Grass.  The $50,000 budget was miniscule, so he got the green light to go ahead.

Since the leading actors would have to know he did not intend his portrayals to be entirely complementary,  he searched far from Graham County to find them. The two fathers were cast in Kentucky, so they could rationalize they not be maligning their own state’s manhood, but North Carolina’s. His business manager asked around, on what was no doubt a thoroughly dubious sounding request, but finally found a 16 year old girl at Knoxville High School, who was willing, and more important, her parents were willing, to allow her to go to Asheville for a screen test.  Helen Mundy was “a Knoxville flapper with a head on her shoulders and fire in her furnace” (Williamson 204). This would be her only film role, in part, because she quickly learned she could make outrageous demands and they had to be met, because without her, the picture would be forced to shut down.  He found Forrest James in a Knoxville restaurant, joking around with his football teammates.  He too, was a movie star just this one time.

He wanted the background faces on the screen to be authentic mountain folk.  His quest for these faces was not smooth, particularly since he searched for them, once again, in urban locations.  When he did cast NC locals, he shot his Graham County extras scenes out of sequence, so they were in the dark about their roles.  Brown rented their old log cabins, spinning wheels and quilts, and hired their taxis, hotels and bought their food.  A one-man economic boom, they did not question his plot and characterization too closely.

They blasted a road to get their supplies in and out, and used an actual cabin, with two walls removed, as the main set.  The dramatic climax was possible because of the nearby dam construction; soon the whole location would be underwater, as it is today.  They couldn’t see the rushes, so they had to assume what they shot was OK, even the shots lit by firelight, or miner’s acetylene lamps.  Everyone on the film got $25 a week, an enormous wage for the time, so there could be no jealousy about salary. 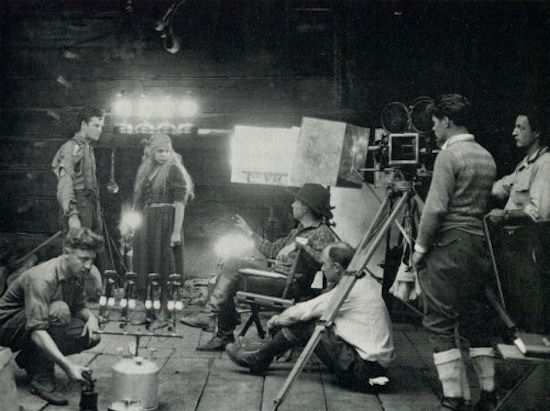 Brown wanted to call the film The Log Cabin.  But Paramount said it had to have the work “love” in the title for marketing purposes.  Still, they didn’t know what to do with it, because it was so cheap, it was almost shelved and declared a loss.  Brown forced the studio’s hand by premiering it himself at one New York theater.  He told the New York Times, “their lives duplicate the lives of the original American settlers” (Williamson 205). And there were some rave reviews, Photoplay said, “A mighty fine picture, in some ways as noteworthy as Robert Flaherty’s Nanook and Moana.  Stark Love, despite its garish box office title, is a picture of genuine merit” (Brownlow 507).  But, 1927 was the beginning of the end of the silent era, and there was essentially no audience for this film, already considered “old-fashioned.”

And then, it virtually disappeared.  One 35mm print was found at the Czech Film Archive, duped to 16mm, with translated subtitles, where it was kept at MoMA and rarely shown.  The author of Hillbillyland, who has made a study of mountain stereotypes, took MoMA’s print to Appalachian State University and Cherokee County for a series of screenings in 1990.  He was surprised to discover that not only could audience members name many of the local people they saw on screen, but that they loved the film.  Although the conditions depicted were outdated by the 1920s, the film’s feminist perspective seemed to counteract any of the stereotypical behavior for the local audience, and they enjoyed it and found, for once, a movie presented them on screen more or less as they once had been to the rest of the world.  Williamson clearly expected a much more negative reaction.

Added to the National Film Registry in 2010, this is a newly restored (2013) 35mm print from the Museum of Modern Art.  “Brown’s death-shadowed lyricism veers into a ferocious and primal family tragedy that’s sparked by the thrilling natural menace of a flooding river” (Brody).

The War, The West and The Wilderness by Kevin Brownlow, Hilbillyland by J. W. Williamson, Stark Love reviewed by Richard Brody in the October 14, 2013 The New Yorker.