Rough and tumble Steamboat Bill is mightily disappointed in Jr, his namby pamby son and heir returning home from college with a ukulele, pencil line moustache and a beret.  Luckily, appearances can be deceiving, when Jr is forced to tussle with both the schemes of a rival riverboat captain and a furious storm.  Referencing gags from his vaudeville days, and beautifully filmed by the Sacramento River, this film is pure comic perfection, 100% on Rotten Tomatoes.   “Steamboat Bill, Jr. displays more inspired energy and inventiveness than pretty much everything else currently in cinemas combined” (London Times) Silent film with live music by David Drazin

Buster Keaton was born into his family’s rough-house vaudeville comedy act. Buster’s role was as “human mop.” His father tossed him around the stage, and the youngest Keaton’s ability to take any fall, or “buster” without harm made the act a huge success. He never attended school and spent his youth evading the social services that sought to separate him from his performing career.  After the Five Keatons broke up, partly as a result of his father’s alcoholism, a chance encounter on a New York City street and a day of improvising on the set of a Fatty Arbuckle 2-reel comedy changed his life. He was smitten with the movies. Keaton and Arbuckle made 15 short comedies between 1917 and 1920; Keaton increasingly shared the director’s chores with Arbuckle, at the time one of the movies top comedy stars. Offered his own studio by producer Joseph Schenck, Keaton embarked on a decade of 2-reel and feature comedies unmatched for their uniquely audacious humor. In “One Week” a do-it-yourself kit home becomes the center of a surrealist storm.  Walter Kerr said of his debut film in The Silent Clowns, “But from the very first film Keaton released as a star, once his association with Arbuckle was ended, was breath-takingly, an explosion of style. To sit through dozens and dozens of short comedies of the period and then to come upon “One Week” is to see the one thing no man ever sees: a garden at the moment of blooming.”

Steamboat Bill, Jr. was Keaton’s last independent feature before his brother-in-law, Joe Schenck, sold his contract to MGM.  His name may not appear in the credits, but as always, he is the primary creative force behind the film.  The story is strongly autobiographical, echoing his relationship with his own father (played by Ernest Torrence) and contains a sequence in a theater evoking his vaudeville origins.  The ending references an apocryphal story Joe Keaton used to tell about his son (that as a baby he was sucked out of a window by a tornado). 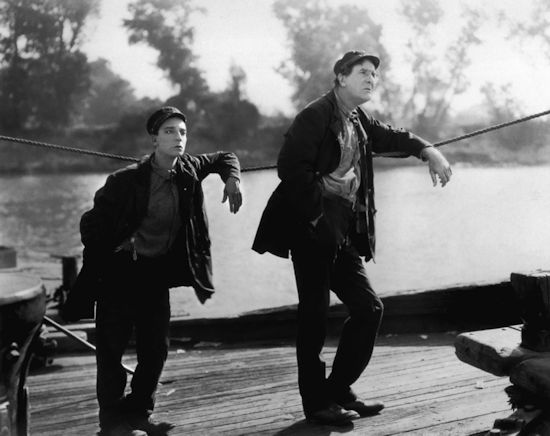 Shooting by the banks of the Sacramento River in northern California, the beautiful photography evokes those of his historical films, The General and Our Hospitality.  Like those films, it contains Confederate iconography (and a couple of mildly racist sight gags).  The 1920s and 30s was a time of romanticizing the South and “The Lost Cause,” the most famous artifact of this time, the novel and film Gone With The Wind.  The film had originally ended with a massive flood, but his supervising producer demanded he change it, because it would remind audiences of the recent destructive Mississippi floods, which pushed the budget higher than any of Keaton’s previous films.  At first, furious by the intervention by the front office, he went on to construct the most memorable finale of any of his films.  Cables ripped sets apart, airplane engines created fierce winds, and cranes lifted debris into the air.  The most dangerous stunt in his entire career you will surely recognize, as it appeared in a couple Keaton’s earlier films in a gentler incarnation, and has been quoted in comedy films for nearly a century.  The front of a house crashes down over him and he is left standing only because of his alignment with an upstairs window.  He only had a couple of inches of clearance in any direction, and the house was weighted so it wouldn’t blow away in the gale.  He could easily have been crushed by a ton of falling set, and supposedly the director could not watch the stunt being filmed.  Some authors have it that Keaton had just been told that his career as an independent artist was over, and that he didn’t care if he lived or died.  “I was mad at the time, or I never would have done the thing” but he also called doing the stunt one of his greatest thrills (Meade180). 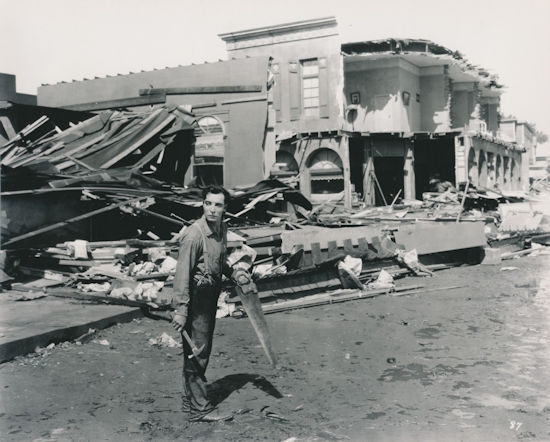 Much fun is made of Bill, Jr’s college foppery, his pencil line moustache, his beret and his “Oxford Bag” wide-leg pants.  He reunites with a female friend in the barber shop, at a time when ladies hairdressers sometimes did not bob, or cut short, women’s hair.  On display, as always, is his extraordinary athletic ability. He does all his own stunts, which was true throughout his silent career, with one exception (a pole vault in College).  He has the essential skills of a circus acrobat.  And, remember that there were no laboratory special effects. Every trick was done on the film in the camera, if necessary, by the use of precise measurements using surveyors’ instruments.  And, every set is full size:  no models.  These films were entirely Buster’s. He sometimes had a nominal director, and a team of gag writers, but he was the central creative force, the star both in front of and behind the camera.  He even built many of the props for his films until an accident with a moving staircase on one of his short films resulted in the studio insisting that he hire a technical director. He relied on his creative team, director Charles Riesner, technical director Fred Gabourie, and a cast of regular actors, often including family members, in this case, his sister, Louise, who doubles for the heroine. Although he was known as The Great Stone Face, his expressions are subtle and communicate volumes, his face embodies the peak of silent film acting. 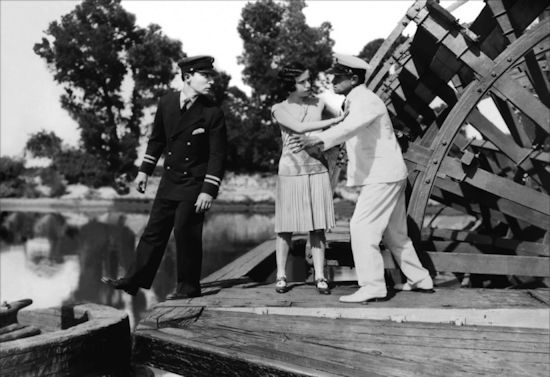 With Marion Byron and Tom McGuire

This film cost over $400,000 to make, and did not make a profit.  Although modern film goers revere Keaton, in his day, many of his features, including The General, were considered flops.  Although his first feature for MGM, The Cameraman, does seem like one of his distinctive independent films, each successive feature came more and more under the thumb of the studio’s executives, who thought they knew better than one of cinema’s great geniuses what sort of films he should be making.  Of course, by 1927, Hollywood was convulsing with the pressure of converting to sound, and Buster’s career began to slide, complicated in no small way by his alcoholism.  Luckily, he lived long enough to experience the revival of his career in the 1960s, and to be acclaimed as a genius, a status he poo-pooed.

David Drazin is providing the live, improvised accompaniment from his home in Evanston, IL.  As some of you may know, as well as being one of the world’s foremost silent film accompanists, he is also my brother, and has been creating these scores since childhood, at first using Blackhawk 8 mm films and a skillfully deployed record player.  He is playing our mother’s Steinway grand piano, and balancing the sound was one of the primary feats of this live stream. 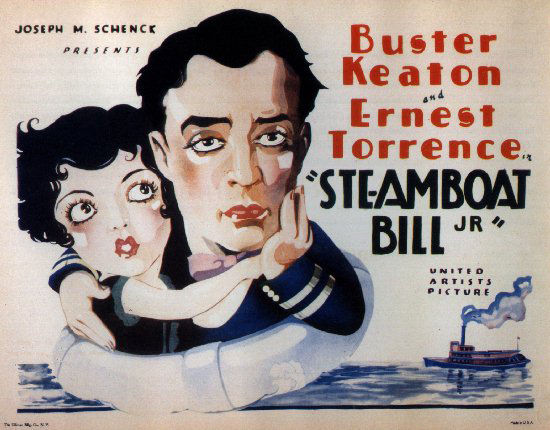 More about Buster Keaton on Moviediva: The Great Buster

The Complete Films of Buster Keaton by Jim Kline, Buster Keaton:  Cut to the Chase by Marion Meade, Keaton: The Man Who Wouldn’t Lie Down by Tom Dardis