On a sweltering hot Tokyo day, detective Murakami (a gorgeous young Mifune) has his revolver picked from his pocket on a jammed streetcar. To his shame and horror, he realizes the gun is being used in a series of crimes, and he begins to identify with the criminal, like him, a war vet who is just another stray dog. A gripping pursuit through the actual back alleys and black markets of Occupied Japan was photographed by Ishiro Honda, who made the ultimate Japanese anti-war statement when he directed the original Godzilla.

Akira Kurosawa was born in Tokyo in 1910, the youngest of 7 children. His father was strict, a military officer, but was also receptive to Western culture at a time many educated Japanese were not. He took his family to European and American films in Tokyo and his children were raised on a beloved 78-record album of “The World’s Best Classics.” Kurosawa’s rebellious older brother, Heigo, wrote on foreign cinema, and was a benshi providing narrative descriptions at silent film screenings. Heigo’s suicide when Kurosawa was a young man affected him deeply.

Kurosawa worked as an assistant director for several years. His is first film as a director, the judo adventure Sanshiro Sugata (1943) was a big hit. He first collaborated with his long-time star, Toshiro Mifune, in Drunken Angel (1948).

Stray Dog was Kurosawa’s 9th film in six years, and benefited from three strong attributes, the postwar atmosphere, the mechanics of crime solution (this was the first Japanese film to show the police at work in this way) and the compelling figure of the hero’s double, a common film noir theme used so effectively in Alfred Hitchcock’s thrillers.

Kurosawa first wrote the treatment as a novel during a strike at the studio when he was otherwise unoccupied. He had read a true story, “The original idea for the picture came when I heard about a real detective who was so unfortunate during those days of shortages as to have lost his pistol” (Richie 58). He wrote Stray Dog as a tribute to the detective author Georges Simeon, one of his favorites. Kurosawa liked the idea of a moral battle wrapped up in the trappings of a quest, a theme he returned to in many of his films. At first, he filmed the loss of the pistol in chronological order, but it was too boring that way, and he fixed on the first sentence of his novel, “It was the hottest day of that entire summer” (Galbraith 110). “Thereafter, there is not an image that is not drenched in sweat: perspiration is beaded upon brows; armpits are sticky; shirts cling to backs; the girls come off the stage and at once collapse, their breasts heaving. Sweat running down their temples, sweat caught in their mascara. The screen is continually fluttering with the motion of fans, folded newspapers; handkerchiefs are worn around the neck to catch the sweat; one of the men carries an electric fan in front of him. Everyone is wearied snappish, exhausted by this great and unnatural heat” (Richie 59).

He felt that much of the credit for the film’s success belonged to his second unit director, Ishiro Honda. “Every day I told him what I wanted, and he would go out into the ruins of postwar Tokyo to film it. There are few men as honest and reliable as Honda. He faithfully brought back exactly the footage I requested and almost everything he shot was used in the final cut of the film. I’m often told that I captured the atmosphere of postwar Japan very well in Stray Dog. If so, I owe a great deal of that success to Honda” (Galbraith 110). Honda dressed in the shabby clothes he was given when mustered out of the Army, and his assistant followed him around the black markets bustling near the railway stations with a portable camera in a box. This worked well, until his path was firmly blocked by a man with a yakuza tattoo, who had seen them consulting together. Although some viewers complained about the long sequence, Kurosawa felt that only that way could the audience be convinced of detective Murakami’s single-minded determination.

Keiko Awaji, who plays the murderer’s girlfriend, was a teenager, her behavior while filming sullen and uncooperative. She did not understand the importance of what she was doing until she saw her picture on the film’s poster. Her childish petulance stands out uniquely among so many cinematic gangster girlfriends. Kurosawa said, “This ingénue was spoiled enough to be a full measure of trouble. She was only 16 years old, had never acted before and all she really wanted to do was dance. She would fret and fuss no matter what she was asked to do, and in places where she was supposed to cry, she would burst out laughing out of pure contrariness (Galbraith 113).

Stray Dog was made in 1949, but only released in the US in 1963, long after Kurosawa’s greatest films, Rashomon, Seven Samurai, etc., were canonized in world film culture. Films in Review, my teenaged film Bible because of the biographical information in its pages had some of the most wrongheaded reviews ever written. I include it wholly, so that we can all appreciate how far film criticism/appreciation has journeyed since that time:

“Unless you are a close student of Japanese films, and/or of the very uneven work of director Akira Kurosawa, you can pass this ‘milestone’ of his career by without loss. He made it in ’49, and it has not been released here until now because of the ineptitudes which make its present appearance regrettable. The script is ridiculous—a Japanese detective loses his gun and tried to get it back and a variety of people are killed with it.

“A young and learning Toshio Mifune plays the detective, and a young and learning Kurosawa didn’t help him very much, I grant Kurosawa has greatly helped to Westernize Japanese movies, especially since he has become less political. But, except for a few lines in the histories of Japanese films, Stray Dog need never again come to your attention.”

But Kurosawa himself did not particularly like this film, thinking it was too technical and devoid of characterization. And Kurosawa expert Donald Richie complains about the fascinating black-market montage, “The atmosphere is caught, to be sure (which is the reason for the montage) but it is so long that one expects summer to be over and autumn begun by the time it finally stops” (Richie 63).

It is most unusual, that only five years after the end of World War II, a Japanese director would make a film in a genre so strongly identified with American movies. Interestingly the similarity to the opening scenes in Sam Fuller’s Pickup on South Street is striking, even to the heat of summer. But it seems highly unlikely that Fuller could have seen Kurosawa’s film before he made his own. Instead of espionage secrets being pick pocketed, Mifune’s detective loses his gun, but even the way the shots are framed is familiar if you have seen the other film

The pistol is Murakami’s sense of identity, since only this symbol of authority, in his own mind, makes him different from a criminal. One may make what one will of the obvious phallic symbolism. And only man’s ability to choose his actions, and his inclination towards civilizing influences sets him apart from the animals, the stray dogs. 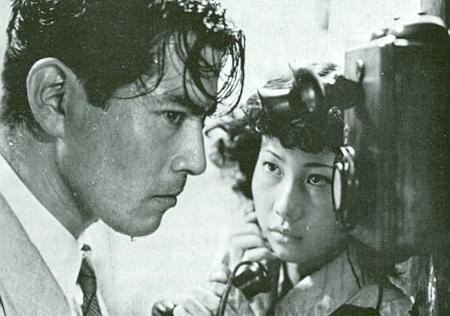 (Sources include: The Emperor and the Wolf by Stuart Galbraith IV, Films of Akira Kurosawa by Donald Richie, Films in Review, April 1964, photo from Richie).