Silent screen sweethearts Gaynor and Farrell take the musical plunge in this Cinderella story from the dawn of sound. Broadway tunesmiths De Sylva, Brown and Henderson provide the showstopping production number “Turn Up the Heat” which “can, with Spartan restraint, only be termed a lulu” (Richard Barrios). Preserved by The Museum of Modern Art with support from The Film Foundation and The Franco American Cultural Fund. Not available on DVD.

The Jazz Singer in 1927 is considered to be the first talking picture. It was a musical. From Al Jolson to Justin Bieber, musicals have been an intrinsic part of Hollywood history. Many early musicals were adaptations of Broadway plays, but Sunny Side Up was one of the first original musicals written for the screen. Fox wanted a special project to serve as the talking picture debut of, “America’s Favorite Lovebirds” (and box office champs) Janet Gaynor and Charles Farrell. They commissioned a book and musical score from the proven Broadway hit makers DeSylva, Brown and Henderson, composers of such perennial hits as “Sweet Georgia Brown.” The trio passed on several other lucrative offers to accept Fox’s, $150,000 in advance plus profits on royalties and copyright on all songs. The songs were crafted to conform to the limited singing abilities of the stars, since this was before the day of prerecorded playback singing. Gaynor sings one song accompanying herself on a zither, with the orchestra as pianissimo as possible, so as not to drown her out.

Janet Gaynor won the first Academy Award for Best Actress in 1928. Her characters were demure, but strong, and her naturalistic acting style kept her a top box office draw into the 1930s. She was born in Philadelphia, and moved with her family to Los Angeles, probably because she and her sister wanted to get into the movies. She began doing extra work, eventually landing a spot in Hal Roach 2-reel comedies. Fox signed her to a contract and she was soon put into two brilliant silent films, FW Murnau’s Sunrise, a visually poetic films sometimes called the greatest film of the silent era, and Seventh Heaven, a gritty fairy tale in which she was a winsome streetwalker who falls in love with a sewer worker played by Farrell. From then on, whenever Fox needed a hit, they teamed them together. 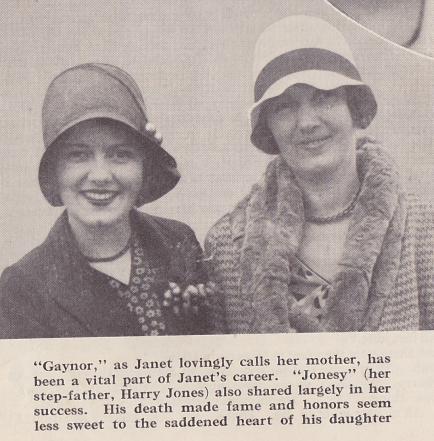 Gaynor maintained her popularity in talking films, especially in versions of State Fair with Will Rogers, and A Star is Born with Frederic March. She retired when she was still at the top, marrying MGM costume designer Gilbert Adrian. They had a son, Robin, traveled and bought a Brazilian coffee plantation. She said, “I think I had a wonderful career; I enjoyed it all and have no sad tales to tell you” (Shipman 240). 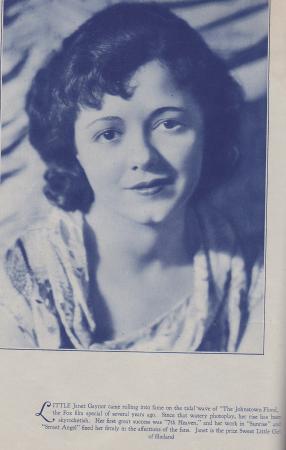 Charles Farrell was born on Cape Cod. His father owned three theaters where he booked variety acts, and Farrell wanted to be an actor. Since his parents knew that an actor’s life could be a struggle, he studied business at Boston University to please them . He managed a vaudeville act after graduation, and the tour took him to Hollywood. He, too began as an extra. “It wasn’t too hard in those days for a good looking young man to crack the extra barrier, especially if he was young, over six feet tall, had an extensive wardrobe, and knew how to dance, swim and ride horseback. Farrell qualified on every count. He was also very photogenic; he liked people, and he had a happy-go-lucky personality” (Bodeen 450). 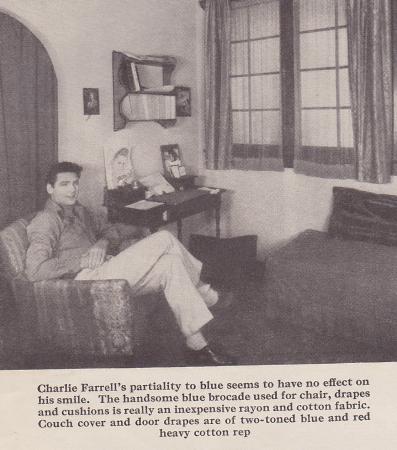 He knocked around until 1926, when he started to get leading roles, in 1928 he made Seventh Heaven with Janet Gaynor. Their passionate love on screen made him a major star and won Gaynor an Academy Award for Best Actress. They would make 12 films together, while the studio tried desperately to fan the flames of a real life romance between them for publicity purposes. Sunny Side Up was the stars’ first all talking film. They were both shocked when they heard how they sounded on screen, and quickly hired vocal coaches in order to improve their speaking voices.

El Brendel is a Swedish dialect comedian whose appeal may be puzzling to the modern-day viewer but he was wildly popular. In 1930, Motion Picture magazine called him “the most irresistible man on the screen.” Early 20th century comedians were fascinated with the American melting pot experience. Many of them were first generation immigrants like their audiences, and a variety of comic accents like Chico Marx’s “Italian” accent were common. Brendel was from vaudeville, where a performer could tour the country for years with the same routine, but soon discovered that movies ate up a lifetime of jokes in a few months. Under contract to Fox he appeared in many of their early talkies, including the science fiction musical, Just Imagine.

Scene stealing Marjorie White, a spunky Broadway comedienne, was in a lot of Fox films in the early 1930s. At 4’ 10” and under 100 lbs, she was quite tiny, but she was still a powerful foil for for Wheeler and Woolsey, Joe E. Brown and the Three Stooges. You may remember her singing “Never Swat a Fly” in Just Imagine, and here you may remember her for the casual use of profanity that sometimes occurred in these early talkies. She was also in the first Three Stooges short “Woman Haters” which was her last film. Sadly, she died in an automobile accident in 1935, aged just 31.

The Famous Meglin Kiddies appear in “If I Had a Talking Picture of You” This school for precocious Hollywood aspirants would soon have its most famous graduate, Shirley Temple. 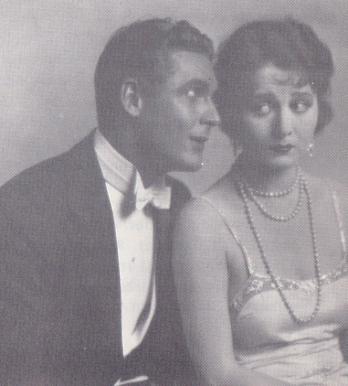 A Cinderella of the tenements story was completely suited to Gaynor’s image of perennial onscreen optimism. “…she can stare straight into the camera and sing, ‘I’m a dreamer, aren’t we all’ with the most unshakable conviction this side of (Al) Jolson” (Barrios 247). David Butler was an actor who had recently begun to direct, and while history views him as more of a craftsman than an artist, he does pull off some excellent setpieces, including the opening shot establishing the atmosphere of the tenement (and the possibilities of sound) and the contrast between the slum party, and a do in the Hamptons. He also directed Bright Eyes with Shirley Temple, shown as part of the Norman Rockwell film series. 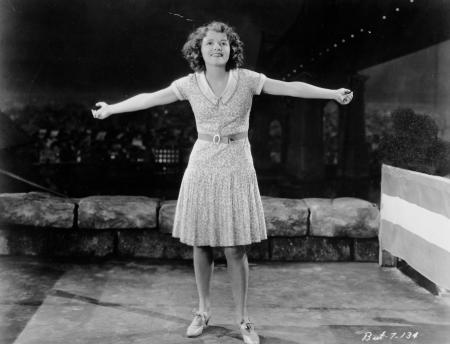 There are numerous, delightful Pre-Code moments, culminating in an enormous production number, perhaps the first one with a purely cinematic design and execution. Sharon Lynn fronts an appreciation of Eskimo hootchy koochy and tropical heat that seems to predict of the chorus girl compositions of Busby Berkeley. “Turn on the Heat” is wonderful mainly because no one concerned felt any need to hold back or any constraint—not from sound men judging what wouldn’t work, or from the Hays Office, or from innate finer feelings, or even from the studio Fire Marshall. They got up and did it, all energy and jubilant trashiness” (Barrios 248).

The scene was choreographed by Fox’s dance director, Seymour Felix. He used a gigantic water tank with a glass top thick enough to hold the weight of the dancers. Although it is crowd pleasing today, it’s hard to calculate how audiences of 1929 reacted to the spectacle. “The staging of ‘Turn on the Heat’ is the greatest thing the talking movies have yet achieved in the line of musical comedy” said the critic for the New York Daily Mirror (Bradley 127).

Although reviews were not particularly strong, the public loved it to the tune of $3.5 million, where it had very long runs in big cities and small towns, alike. The imitations that would follow were not nearly as successful.

The audience at the NC Museum of Art screening loved the film, applauding after every number, as if seeing a live show in the theater. And, indeed, watching this gorgeous print from MoMA on the big screen, one did have the feeling of being at a hit Broadway show in 1929. Everyone loved El Brendel and the comedy couple of Marjorie White and Frank Richardson, and appreciated the pluck of Gaynor and Farrell as they faced down the microphone for the first time. Afterwards, one person came up to tell me, “I feel sorry for all the people (meaning regular audience members who opted for the ACC basketball tournament instead) who didn’t come to see this film.”

If you love Singin’ in the Rain and have ever wondered if all the stories told in that film about the early days of the talkies are true, you can see a lot of them illustrated here. Director David Butler, in an interview near the end of his life said, “Janet Gaynor had a lot of guts, that girl, to sing. She had never sung in her life before…(Farrell) had never sung before, either. But, I think the fact that sound was just coming in—I think we could get away with things like that” (Bradley 129). In spite of its archaic moments, it was a landmark in the blending of talk, song, dance, sound and cinematography on the screen.

Sources include: A Song in the Dark by Richard Barrios, The Speed of Sound: Hollywood and the Talkie Revolution 1926-1930 by Scott Eyman, The First Hollywood Musicals: A Critical Filmography of 171 Features 1927-1932 by Edwin M. Bradley, “Charles Farrell” by DeWitt Bodeen, October, 1976 Films in Review, The Great Movie Stars: The Golden Years by David Shipman, “Janet Gaynor” by Chauncey L. Carr in October, 1959, Films in Review.